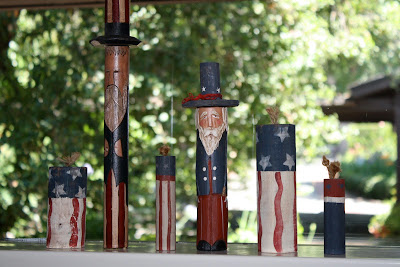 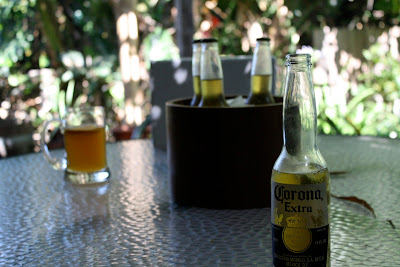 Saturday afternoon was hot. At one point while running errands I had parked the car in the sun and when I returned, the temperature gauge read 108 degrees. (It quickly cooled down to 97 after driving for a minute.) I put some Coronas in the ice bucket and sat out on the patio for a bit. 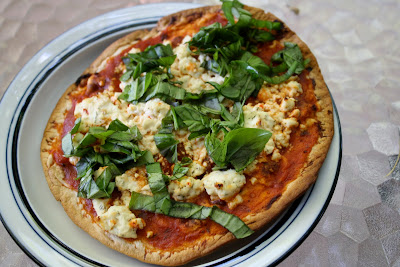 I made an appetizer: pita bread, topped with the roasted garlic/dill goat cheese, baked in the oven for ten minutes and sprinkled with fresh basil. It was a tasty treat. 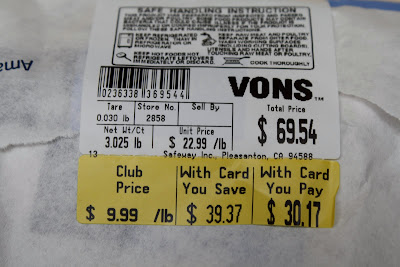 Funny story. Elizabeth and I were planning on having dinner at my parents' house. I was just going to keep it simple and grill hot dogs. But we were out for a drive in the afternoon and we went past the new Vons on the corner of Colorado and Sierra Madre. "Let's check it out," I said.

It's pretty nice inside, with a Starbucks, a very nice flower department, and even an excellent wine cellar (for a grocery store). At the seafood counter, crab legs were on sale for $9.99 per pound, as long as you have a Vons Club card. I decided that would be a great dinner, so I had the lady give me three pounds.

As I was walking up to pay for them, it suddenly dawned on me that I did not have my card with me, nor did Elizabeth have hers. ("I think you took my card," she said, which I actually think is true.) No problem, you may think, just enter your phone number. Except, in something I have never understood, neither my nor Elizabeth's phone numbers have ever worked. We have to present one of our cards, or we don't get the savings.

Normally when I forget my card I just let it go. But, as you can see from the above picture, we were talking about a savings of almost forty dollars. I wasn't going to pass that up. So I entered my parents' phone number. That didn't work; I guess they don't have a card. I entered the number of a friend of mine who I know sometimes goes to Vons. Nope, didn't work either.

Then I remembered something: my grandmother used to live up the hill from the Vons in Monrovia and would often shop there. Could that possibly work? So I entered her number. Sure enough, it went through. She has not lived in the house with that number for a dozen years. She has not lived anywhere for more than four years - she passed away in 2007. But her Vons Club card still works. Thanks for saving me forty bucks, Nana. 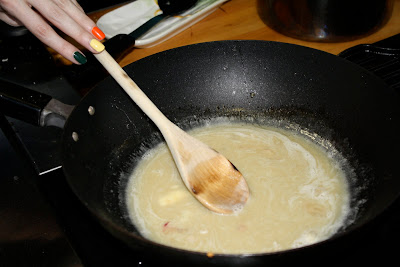 I put together a champagne-vanilla butter sauce with a cup of champagne, a drop of vanilla extract, shallots, tarragon, and several pats of butter. This is a picture of Elizabeth stirring the sauce, not me - my nails don't look like that. 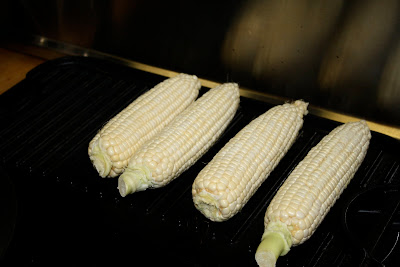 I grilled four of the ears of sweet corn that I had picked up that morning at the farmers market. 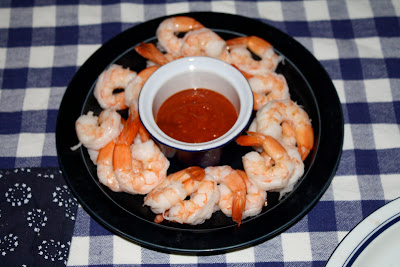 My mom is not a crab eater so she had shrimp, which were very good. 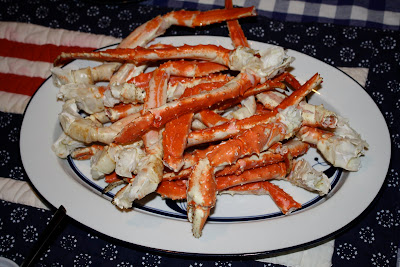 But not as good as the crab legs. 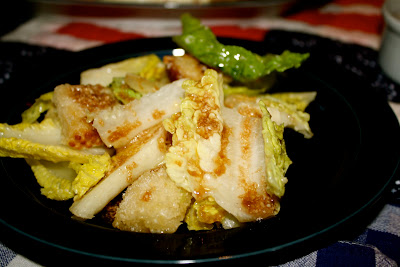 Caesar salad is always a good accompaniment to seafood, in my opinion. 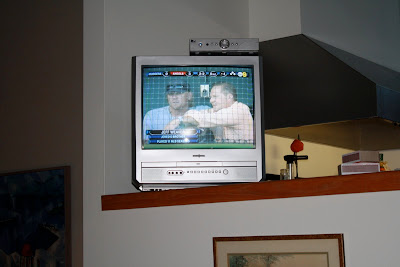 Did I turn around the small kitchen TV to face the dining room so that I could watch the Angels vs. Dodgers? You know that I did. 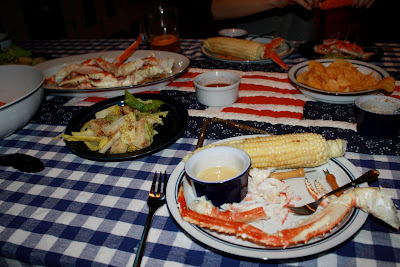 did you make the salad, pp?

No. My mom made the salad and croutons and a dressing, but I thought the dressing was too oily so I took a bit of it and added a lot of balsamic vinegar and parmesan cheese.

Vin Scully calling an Angels game on a hot summer night? I know you were in heaven.

You know me well.