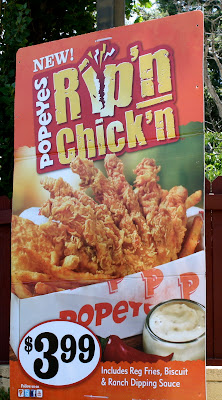 I'm a big fan of Popeyes and most of the time their promotions sound great. But when I read about this newest one my reaction was more of an Excuse me? than anything else.

"We cut a plump, all white meat chicken breast into strips," the advertisement states. From the picture it was clear that the pieces all remain attached. "We call it Rip'n Chick'n because you just rip and dip it," the ad continues.

I'll be honest: despite spending more time thinking about fast food than anyone ever should, I've never once thought You know what would make chicken strips more fun? If I could rip them apart myself.

Still, it's Popeyes. They have served enough great promotions over the years to earn the benefit of the doubt from me. So I headed to out to give them a try. I ordered the Rip'n Chick'n with fries and a drink for $4.99 plus tax.

I noticed they still had signs for the Firecracker Butterfly Shrimp that I wrote about last month. If you read that post, you may recall that Popeyes did not have the signature element of that promotion - the Firecracker sauce. (And some people who left comments also reported that the Popeyes they went to was not offering the Firecracker sauce.) Now I figured I could finally give it a try.

"Do you have the Firecracker sauce?" I asked the woman at the counter.

"I would like to buy two of them," I said, and gave her fifty cents.

30 seconds later I was slightly disappointed but not at all surprised when she returned and said to me "We don't have the Firecracker sauce anymore."

After 6 minutes I received my bag and I took it to my car to eat. 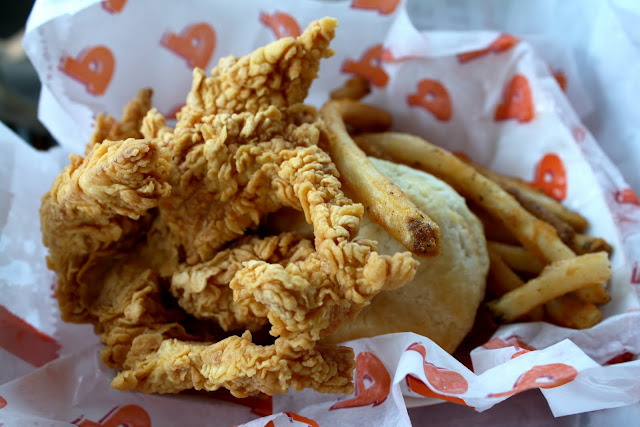 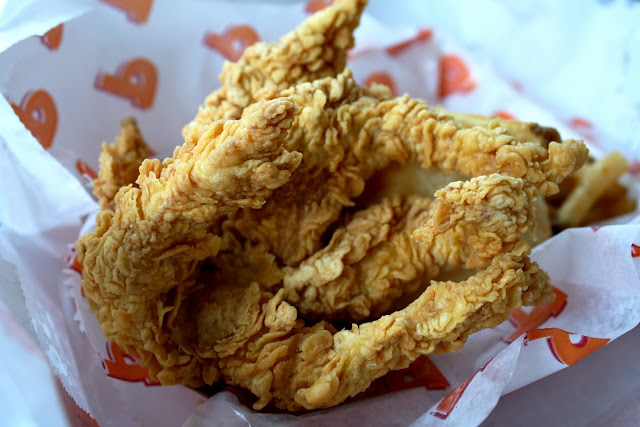 There's no other way to put it: it looked weird. Creepy. Somewhat sinister, like the amorphous debris that lurks in aquariums. But it was hot and crispy and smelled good, so I started ripping it apart. 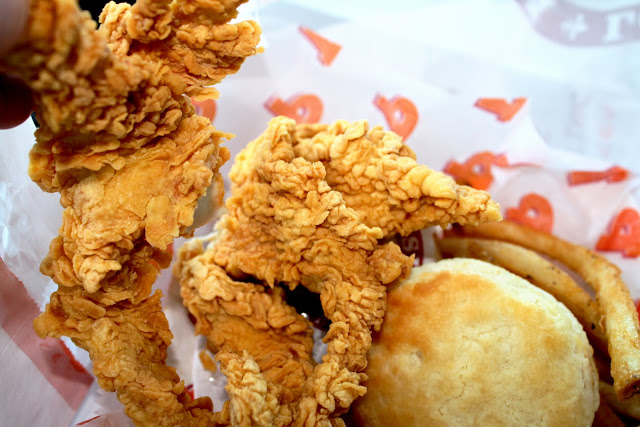 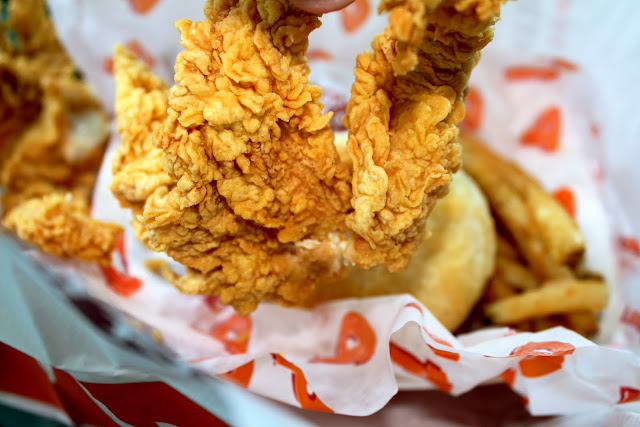 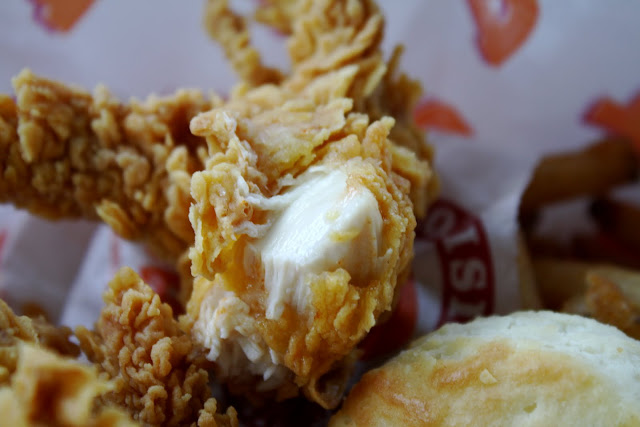 To my surprise, there was a certain amount of simple joy in tearing apart the chicken pieces. I'm not saying I have found the one thing I've been looking for my whole life. I'm not even saying it was the culinary highlight of my day. I'm just saying it was more fun than I ever would have imagined tearing apart fried chicken strips could be.

The chicken was very good, just like Popeyes usually is. It was juicy and meaty; the batter was hot and crispy. (Like Burger King's chicken - only the exact opposite.) Supposedly it is battered with cayenne, habanero, white and black peppers, although the only one of those I could detect was the white.

My one complaint? It has little to do with the promotion, it's about Popeyes sauces. 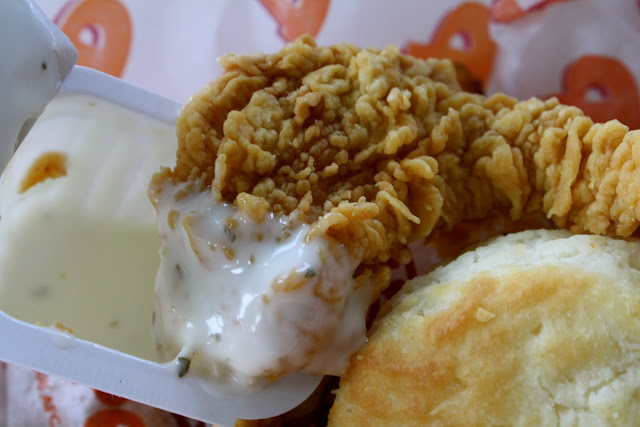 I mentioned not being able to try the Firecracker sauce (on two occasions). For years Popeyes served "Delta sauce," a spicy sauce containing Creole mustard, relish, chipotle, and several other ingredients I love. They also had a horseradish sauce as good as any I've ever had. They no longer carry either. A little over a week ago I wrote about fast food condiments and I tried the Popeyes Spicy Honey Mustard. I asked for one of those on this trip.

"We don't carry that anymore," the girl told me.

This was disappointing. Popeyes went from having better sauces than any fast food chain - better than most restaurants, too - and now they have a weaker selection than an AMPM condiment stand. This chicken was really good and I would have loved it with one of Popeyes defunct sauces. Instead all I could dip it in was the buttermilk ranch, a completely boring sauce. 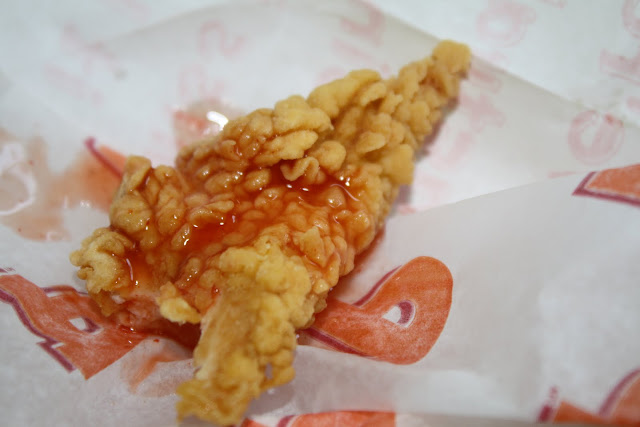 Well, I guess since I carry Trappey's in my car I had one other option, and it was certainly better than the house ranch, but it wasn't great.

This is another good promotion from Popeyes, but I would not say it's great in the tradition of their crawfish, the Red Hot Popcorn Chicken, or the Wicked Chicken. But a very solid offering.
Posted by JustinM at 12:07 PM

I love Popeye's chicken. And to be honest, I always pull apart my chicken strips anyway, so this might come in handy for me.

I'm with you. Ranch can suck it!

I've only found one good application for Ranch - as a condiment for turkey burgers. With a good turkey burger it sings.

Seems you always get your Popeye's promotions a day or two early. I'll consider myself lucky since my local restaurant is still selling Wicked Chicken as well as Firecracker Shrimp.

These look good, but I agree on the sauce. I usually eat my Popeye's at home though, so now I've just stocked up on my own sauces since they either don't have them or neglect to give them to me.

I love their chicken tenders more than pretty much any other fast food restaurant so I'm sure I'll like this, but I might report back after having tried them.

Don't bring up the crawfish. I miss them :(

Let's just say that when I see a new Popeyes promotion there is nothing I will let get in my way of trying it. Jared Weaver could be in the middle of a perfect game, Elizabeth could send me a text that she is at home cooking me a steak dinner... and I would still be like "Sorry, I gotta go by Popeyes."

You would not say that.

Fritos- I almost spit out my drink I laughed so hard at your comment.

That's true, I would never say that... I love baseball too much.

"it looked weird. Creepy. Somewhat sinister, like the amorphous debris that lurks in aquariums."

Ha, when I saw that commercial on TV, I wondered when did Popeye's start frying soft-shelled crabs.

I tried the Rip'n Chicken myself today too -- agreed that it was good overall but the ranch sauce was generic. They're actually like skinny chicken tenders, which might be a good thing for those who like more breading.

As for me, I think I'll stick to their more traditional fare -- spicy legs & thighs w a side of red beans & rice.

So funny. The first time I ordered this, it looked like a fried human hand. The bottom was about the size of a small fist and the strips were each the thickness and length of fingers. It was indeed creepy. I ripped the whole thing apart quickly so that it wouldn't be this breaded appendage on my tray. But it sure tastes good.

I am pretty disappointed with Popeyes consistency in general from store to store. Franchisees seem to have free reign over which sauces they carry, which credit cards they accept if any, how many sauces you get, and portion sizes. I end up eating at certain locations and avoiding others based on this.

So true, Jake. The Popeyes in Pasadena, if you want to pay by debit card, will charge you a fee and then make you get cash back. I have never seen that anywhere. So, say, if you buy $12 worth of food, they will charge you 23 bucks: 12 for your dinner, 1 dollar for a service charge, and then they will make you take back 10 bucks. They literally won't let you use your debit card unless they can give you money back.

a little too much coating. Think maybe 3 fat "fingers" of meat would be better instead of 5. That way you would get more meat with the coating.

They suck if they dont bring back honey mustard

absolutely not spicy. no habenero pepper flavor. and who wants raunch dressing? don't waste your time