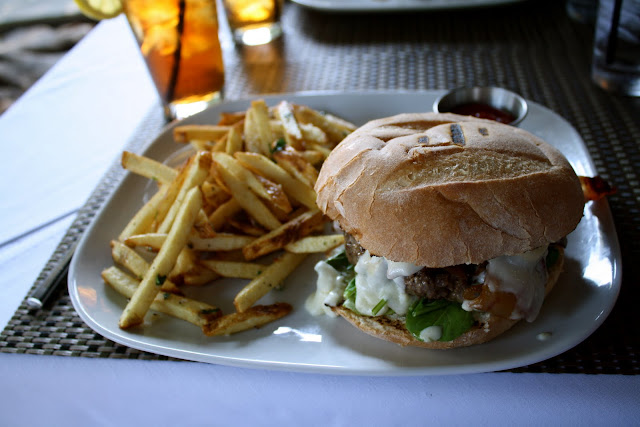 Green Street Tavern has appeared many times on this blog over the years. I've gone through several relationships with the restaurant: at first, I refused to visit, so upset was I that it moved into the space of the former Kuala Lumpur, one of my favorite restaurants ever in Pasadena. Then, after GST had been open a few weeks, my friend Tracie and I decided to have some cheese and wine at one of their sidewalk tables on an autumn afternoon. I fell in love with the place almost immediately.

When Elizabeth moved to California we went to Green Street Tavern a few times for dinner, but eventually decided we like it much more for lunch, as long as we can sit on the sidewalk. Even on the hottest of days, the shade from the trees makes it pleasant. Just the other day I wrote about one such meal - the wild boar meatloaf sandwich, calling it perhaps the best sandwich I have eaten in 2011.

But today I have to write about the burger, for two reasons. First, the sky is big in pasadena, the daily photoblog of Pasadena, wrote about Hutch's two weeks ago and mentioned that I called it the best burger in Pasadena. I want to clarify: there is no burger in the world that I love more, but I still would not call it the best burger in town.

Second, a few weeks ago my friend Dave and I were going out to lunch. He mentioned that he felt like a burger and suggested Jake's. This town has many burgers that I love, but Jake's isn't one of them.

"What about Green Street Tavern?" I asked.

"For a burger?" he replied incredulously.

I assured him that they might make the best burger in town, which surprised him. (Dave had only been to GST once, for dinner on my birthday a couple of years ago. The dinner menu skews more formal than the lunch menu and is devoid of sandwiches or burgers.) We had lunch that day, both of us ordering burgers, and he agreed that it was fantastic.

But I didn't take any pictures. I figured I should return and do a better job documenting the burger. Over the weekend, when Elizabeth and I were celebrating something, we decided to have lunch at Green Street Tavern. 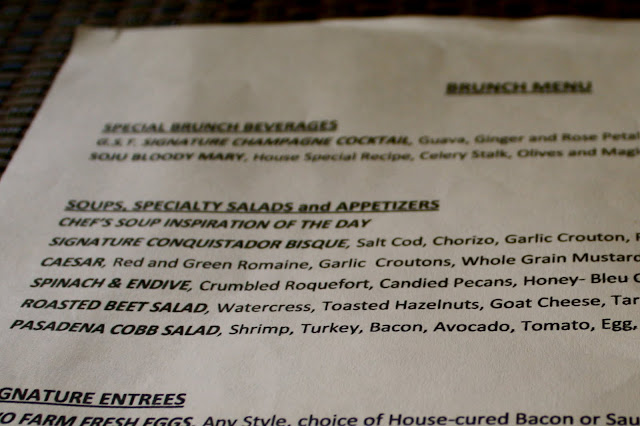 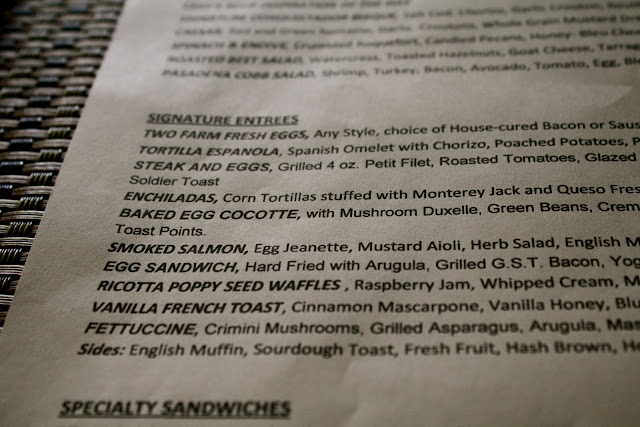 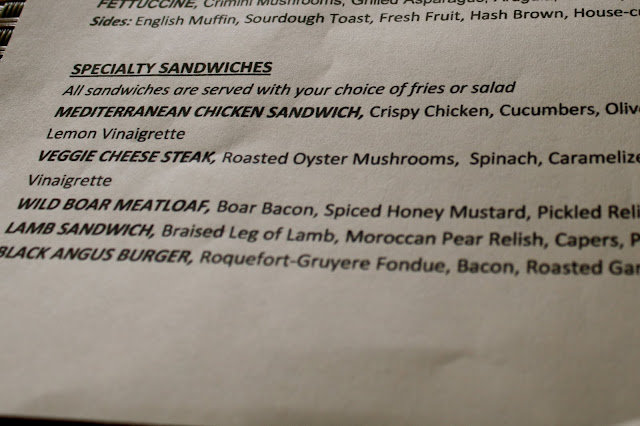 On Saturday and Sunday there is a brunch menu, containing the usual assortment of breakfast-type foods that I would never order, but also containing some of the sandwiches from the regular lunch menu, including the burger. 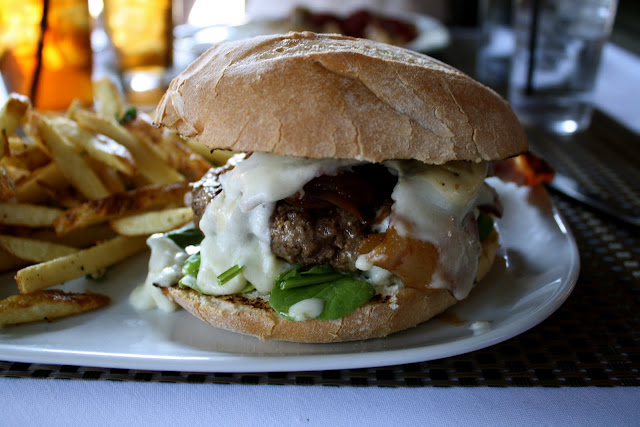 The Black Angus beef comes on a soft bun - depending on the day, there may be other burgers in town that I like more, but this bun is always my favorite - with arugula, aioli, bacon, balsamic onions and a Roquefort-Gruyere fondue. 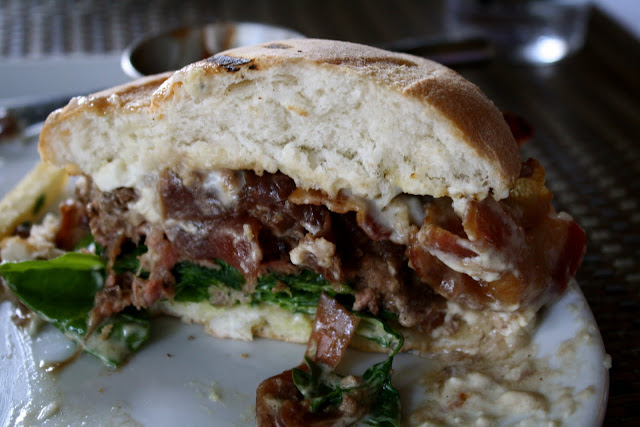 There is no way to eat this burger without it getting messy, but it's worth it. The cheese fondue, which would overpower most burgers, is well-balance by the peppery arugula and salty bacon. 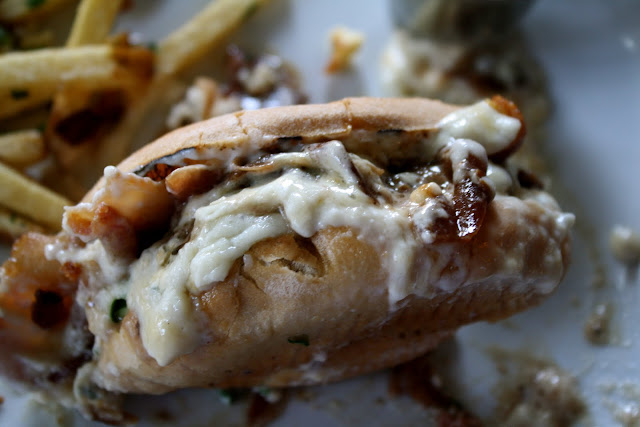 I'm not going to lie: if you don't like cheese, this isn't the burger for you. 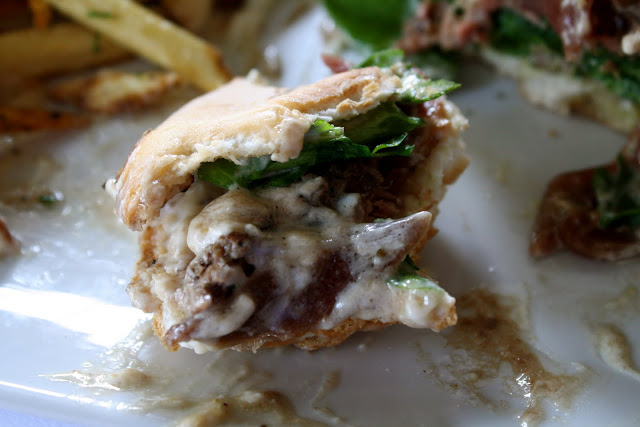 There are some burgers in Pasadena that I truly love, not to mention the Hutch's burger that I call my favorite in the world, but when I am asked what I think the best burger in Pasadena is, I answer this one. 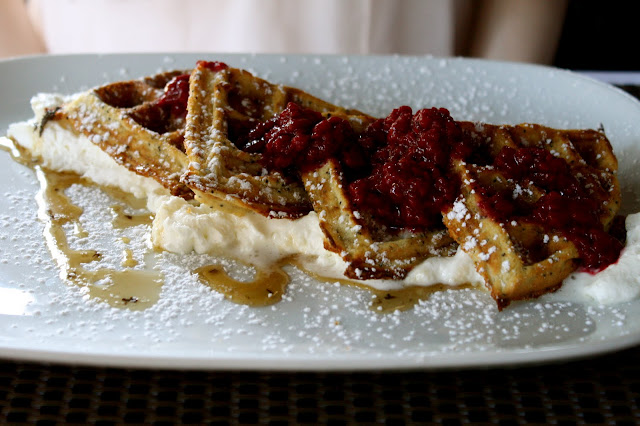 By the way, those brunch items that I find ridiculous? Elizabeth loves them, and she ordered one: the ricotta poppy seed waffles with raspberry jam, whipped cream and maple syrup. She loved it and sawed off a small corner for me. The raspberry jam was much too sweet for me - not surprising - and overall I did not really enjoy the waffle, but I cannot deny that it was high-quality. If this kind of dish sounds good to you, I promise you will enjoy this.
Posted by JustinM at 10:29 AM

Their burger is amazing, messy, but amazing! But those waffles were so good. I honestly considered ordering a second plate of them.

I may need to stop by for a burger soon.

Nice new banner! But I miss the cherry dipped cone...

Okay, I was only using pictures that I took with the DSLR we got in February... but just for you, I added that one from last summer.

Thanks for the shout out, and now I think I need to try another burger!