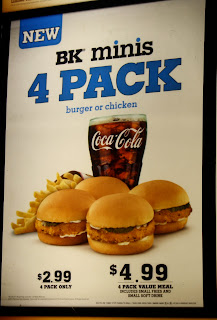 I never was able to try the Church's minis, and that's a shame, because I really like Church's fried chicken. But a few months back, when advertisements for the minis started appearing everywhere - including my mailbox - I went to no fewer than five Church's locations. None had the minis; none knew if they were ever going to.

The other night I was driving past Burger King when I noticed a sign reading "BK Minis." Burger King is my least favorite fast food chain (by far) but still I thought Why not? Especially when I got close and noticed that the minis look similar to the ads I saw for Church's minis. (There are two kinds of minis to choose from: burgers and fried chicken. But the former seemed too close to the BK "Burger Shots" of a couple years back, and I did not enjoy those.)

A four pack was only $2.99, which seemed like a reasonable amount. A couple of minutes later I was back at home. 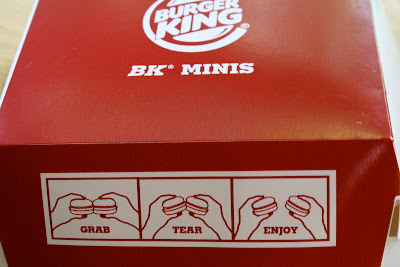 I always like it when instructions are included on how to eat a product. It's even better when those instructions include "Enjoy." 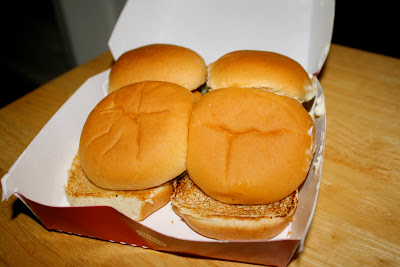 Not terrible looking at first, although the warm mayonnaise leaking out and drenching the side of the container wasn't terribly appetizing. 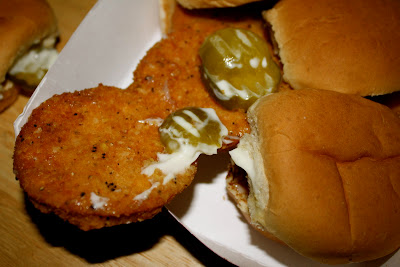 Now I see why one of the instructions was "Tear" - the chicken patties are fused together. That's just weird. 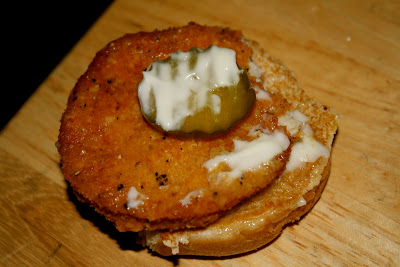 The first bite was a surprise - it was initially amazing. The bun was the best bun I may have ever had from a national fast food chain. It was warm and soft like it had just been freshly baked. And the chicken was crispy. I was hit with a strong reaction: this tasted remarkably similar to my beloved KFC Chicken Littles.

But then I chewed it a little more. This was not a Chicken Little. The chicken, while definitely crispy, had no chicken flavor. It was just a processed blend of something with a vaguely chicken-like texture. The only real flavor was the breading.

I could not help but think how good these could have been with higher-quality chicken. And I'm not talking about Thomas Keller's fried chicken, I mean something along the lines of Church's... or hell, even McDonald's. But these thin, bland, conjoined pieces of chicken just didn't do it for me.

So I decided to add some additional flavors to the minis: 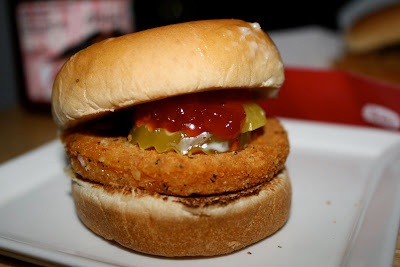 My jalapeno sauce that has made several appearances on this blog over the last few weeks. This was definitely a nice distraction. If I'd had some goat cheese I would have thrown that on, too. 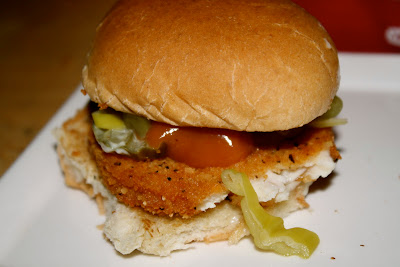 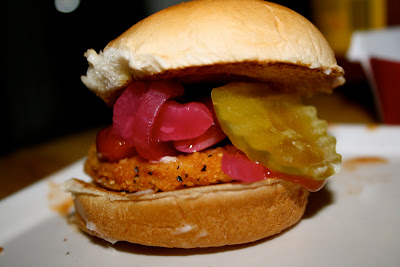 Pickled red onions and barbecue sauce. This was too much. I like those flavors but they were so overpowering that they became all that I could taste... even the great bun disappeared.
The Chicken Minis are not the worst thing I have ever had from Burger King - not even close. And as I wrote, at first bite I actually kind of liked them. The buns were fantastic and the chicken was crispy. But it wasn't very good chicken, and overall that ruined the experience for me.
Posted by JustinM at 12:19 PM

I always want to give you props when you go back to BK because of your near-hatred of the place. I happen to disagree with you on your opinion, I can totally get with some flame-broiling every now and then, but then again I freakin' love the McRib too, so our tastes are often sometimes in disagreement.

A trick I have found to make value menu chicken sandos almost great is to just mix Sriracha with the mayo that is already on there. Turns out pretty good every time, but Sriracha makes almost anything awesome.

There is always room for respectful disagreement here. Obviously a lot of people - one of whom I live with - like BK or there wouldn't be more than 11,000 units in the world. And every once in a while I get a burger that is quite good - the Whiplash Whopper, for example. But the vast majority of burgers I try from BK taste freezer-burned and flavorless. And I think their chicken and fries are just plain terrible.

Sriracha-mayo is something I have been enjoying for a long time, though I'm not sure if I've ever put it on a fast food burger/sandwich. I also usually add cilantro to it, too, for a little extra flavor.

God, I would give ANYTHING to he a bag of Chicken Littles one last time. I haven't had them in like 15 years :(

I hear ya' man. More people have found this blog because of things I have written about Chicken Littles than pretty much any other thing.

It appears that tearing apart one's own fast food might become the latest rage.

"The Chicken Minis are not the worst thing I have ever had from Burger King - not even close."

That's quite a statement. Just wunderin what's much worse!

Pretty much any of their burgers.

LMAO @ the "ENJOY" observation. As if there's no alternative but to enjoy it. You can't hate it. We made it!

I'll pass... Unless I get so drunk one night I forget this review.

S**t, Jarrett, I'll probably get so drunk that I forget this review and try them again...