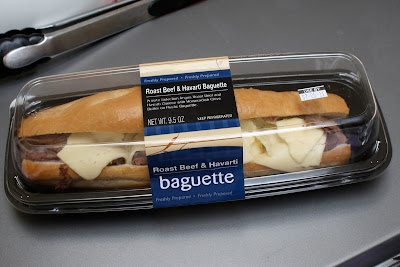 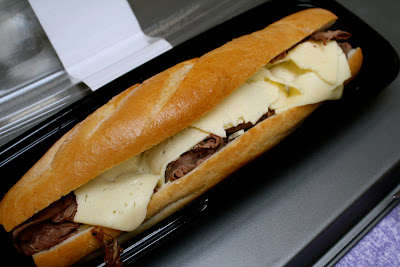 After doing some stuff on Sunday afternoon, including going to the freaking mall, I was hungry but not in a mood to be around people. If you've ever been to a mall on a holiday weekend, you know where I'm coming from. I had to get a couple things at the store and this roast beef and havarti sandwich looked pretty good, and large enough for the two of us to split. It was on sale for a buck off - $4.99. 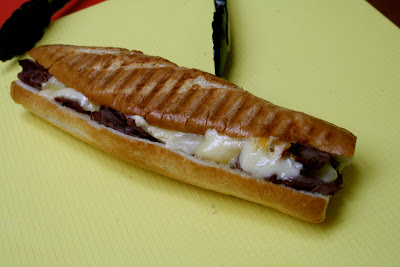 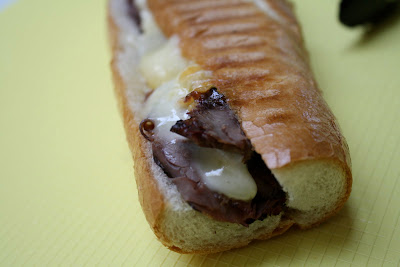 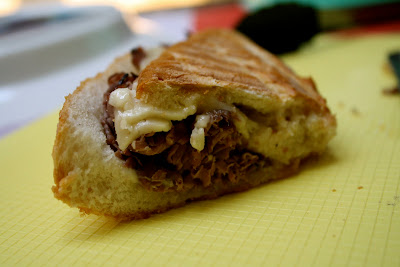 I cooked it on the panini press for about five minutes and divided it into two. It was surprisingly good; I would not hesitate to get another of these. It was more than enough to share. I added some pickle and a bit of spicy honey mustard to mine, which made it even better. 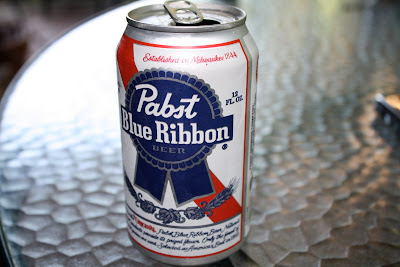 Wanna know why I was at the mall? Okay, I'll tell you. Two weeks ago, for Fathers Day, I bought my dad a book. But, as I should have guessed, he already has it. So I told him to find another book he wanted and I would go to Borders and exchange it. He and my mom looked at lots of books - everything he possibly wanted, she had ordered for him from Amazon. They told me and Elizabeth to just get something for ourselves.

But I didn't really want to take my dad's Fathers Day present and get something for myself, you know? I knew he had never seen the movie Gran Torino - I think he had said something about it being too depressing to see Clint Eastwood as a grumpy old man - and I knew he would like it, so I exchanged the book for that movie. We watched it Sunday while I ate lunch.

Eastwood's character drinks Pabst Blue Ribbon throughout the movie, so when Elizabeth and I stopped by the liquor store in the afternoon, I announced that I was getting some PBR.

"Are you serious?" she asked.

Indeed I was. It had been a long time since I'd had one - I don't remember how long, actually. It was okay. Nothing special, though much better than other beers that serve as fashion accessories for people who don't really like beer, like Rolling Rock or Olympia. But the Modelo we drank - including the one I have open as I type this - was better.
Posted by JustinM at 9:05 PM

I like Rolling Rock. There was a Rolling Rock cafe in my hometown, which might be the reason why I enjoy it. I do however like lots of other beers as well. And that sandwich was incredibly good for a pre-made, grocery store buy! Happy 4th to all!

lesson learned: anytime a sammie is mediocre, add mustard and pickles to it! Happy 4th.

I had a PBR at T. Boyle's last week when the Bitburger keg went sour - it was very satisfying. Luckily, the Bit is back to form now.

Although according to some of the people at T Boyles, it wasn't actually sour and you and Herb were wrong.

However, I know whose opinion I trust.

Ok, I'm from Oly. I must defend Oly beer (at least the old school version). It really was better when the brewery was running in Tunwater before the brand was sold.

I have no trouble believing that. I certainly prefer it to Rolling Rock.