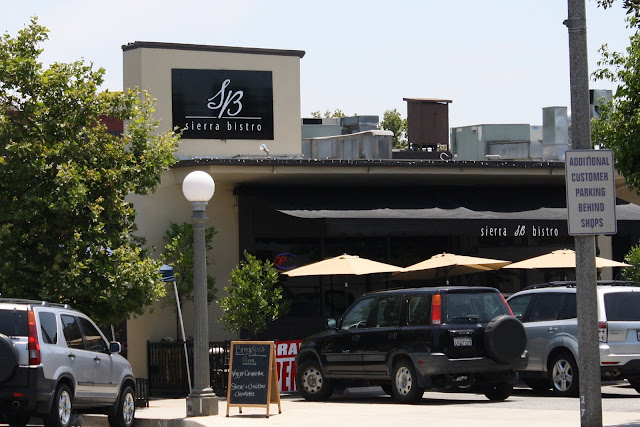 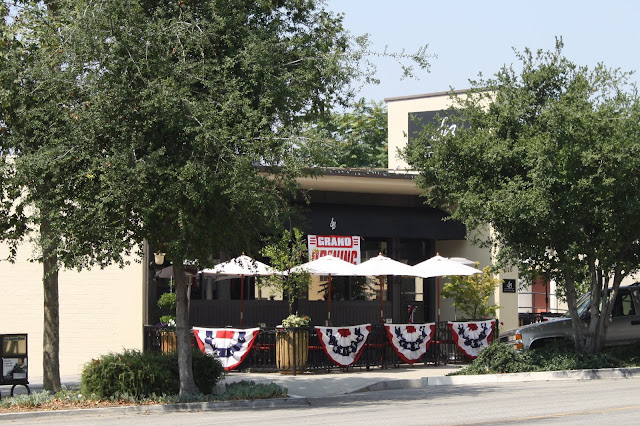 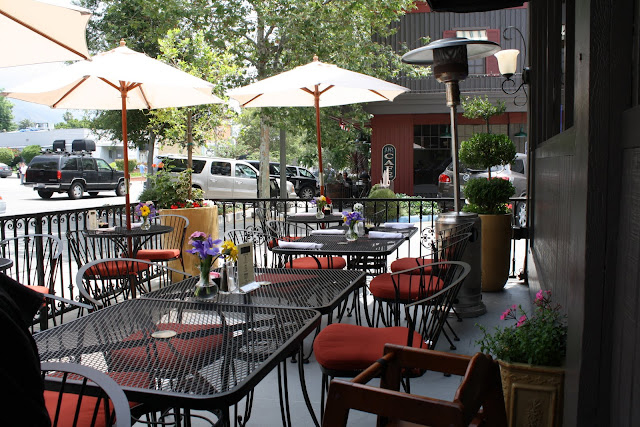 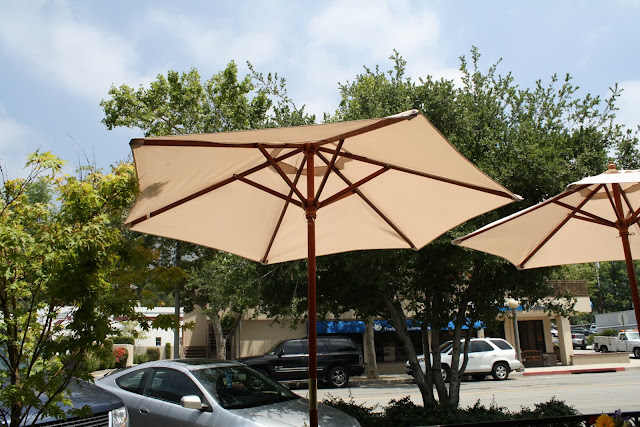 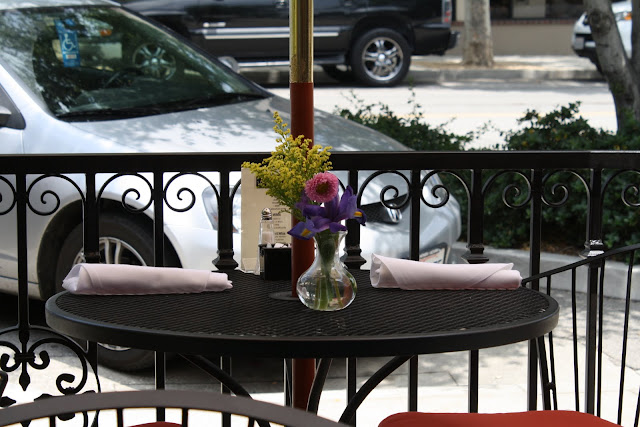 I ate at Charcuterie in Sierra Madre a couple of times over the years and found it to be quite enjoyable. I was never devoted to it like some people I know, but I certainly understood where their passion came from: it was above-average food in a very relaxed atmosphere.

The other day, while Elizabeth and I were contemplating what to do for lunch just after we'd gone by Taylor's Prime Meats, we drove by the space on Sierra Madre Blvd and noticed a new sign reading "Sierra Bistro." A banner advertising "Grand Opening" was also hanging. We dropped off our groceries, looked up the Sierra Bistro menu online, and decided to go there for lunch. The grey skies had started to give way to blue, and the idea of sitting outside, especially just under the mountains in Sierra Madre, was appealing.

It turns out the restaurant is owned by the same people as Charcuterie and the head chef used to be the sous chef at Charcuterie. 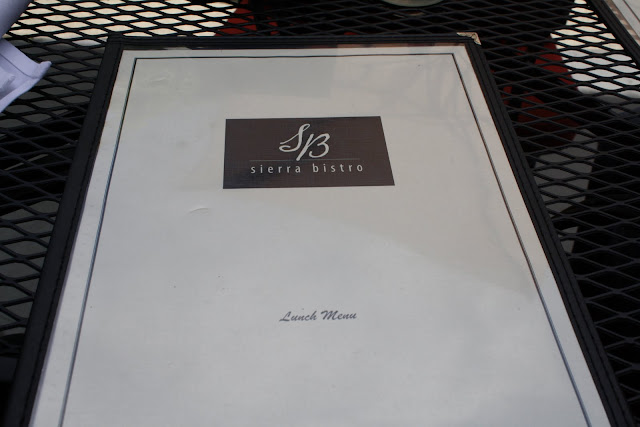 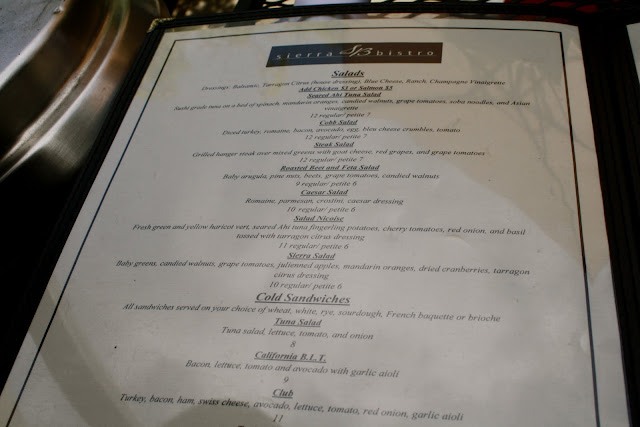 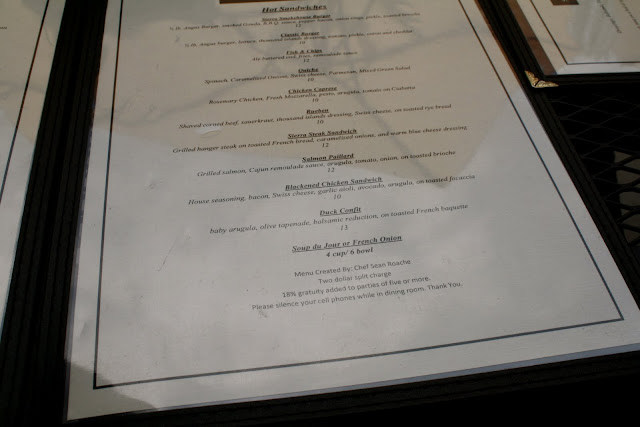 We took a seat on the patio on the north side of the restaurant (there is also one on the west side) and opened the menus. I narrowed it down to the fish & chips or the "Rueben." (Is there a maxim about any restaurant that misspells Reuben always having a lousy one? If not, there should be. But now I'm getting ahead of myself.) I asked the waitress's opinion and she said both were good. So I decided to go with the sandwich.

The waitress was great, very friendly and efficient. And the iced tea was good. Unfortunately, that's where the good news ends. 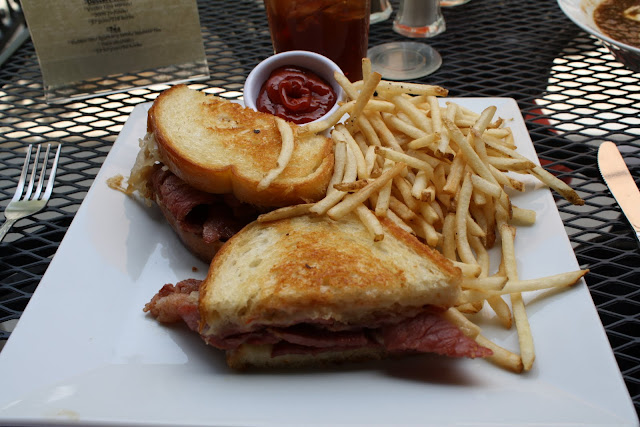 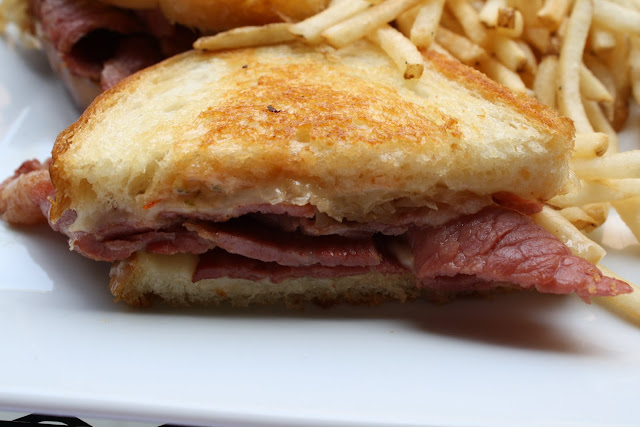 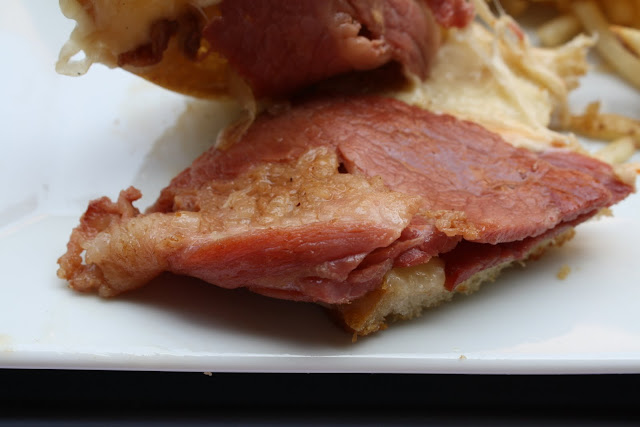 The corned beef in my sandwich was as tough as rubber bands and it was full of fat. I understand corned beef often has pieces of fat attached to it, and sometimes it just can't all be trimmed. But this was loaded with fat. After the first two bites, when I had to yank two quarter-size chunks of fat from between my teeth, I pulled apart the sandwich and removed as much fat as I could with my fingers. 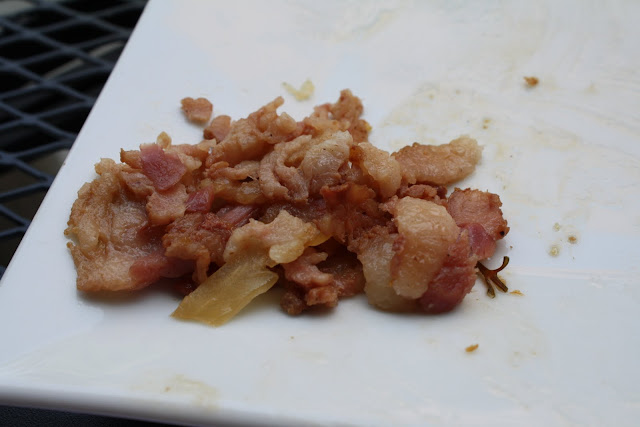 This is what I pulled out - still less than half of the fat that was lurking in the sandwich.

I was happy when I'd seen the fries were extra-skinny shoestrings. Those are always tasty. But these were room temperature. Barely warm.

"I'm surprised you're eating them," Elizabeth said after taking a few and trying them herself.

(A few minutes after we received our food, a woman at the next table received hers and immediately said to the waitress: "These fries are cold.") 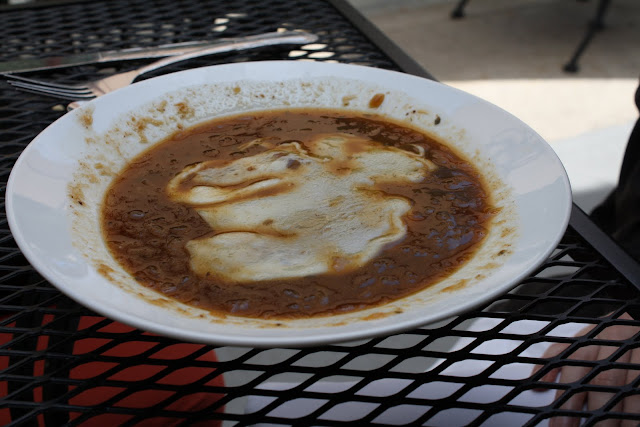 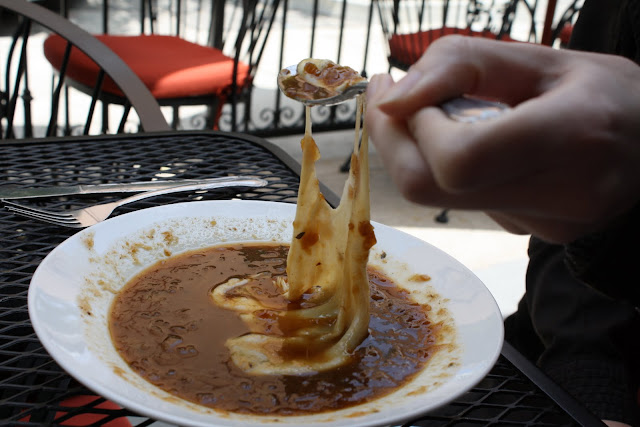 Elizabeth was not impressed with her soup at all. The cheese was a big puddle with no flavor, there were no croutons, and the broth was merely average.

I understand it's easy for little things to escape a restaurant's attention. Fatty sandwich meat? It happens sometimes. Bland soup? Well, okay. But serving not-warm fries to two different tables... when there are only three tables occupied in the entire place? That just shows a complete lack of care.

If Sierra Bistro were a brand new restaurant, I might be willing to try it again. But the fact that it's the same owners as Charcuterie - and they kept some continuity with the chef - and yet they still turned out such lousy food, I am certain I will never return.
Posted by JustinM at 10:10 AM

uch what a bummer! I will say that photo of the glob of cheese on the spoon is a classic...might have to go in your header ;)

Never thought about that with the reuben. Funny! That looks terrible though.

what kinda soup did elizabeth order?

French onion. Guess I should have included that.

i would have lost my shit, FYI. i probably would have thrown something and/or punched someone. haha.

The cheese in that soup looks like a smiling frog with it's hands behind its back.

Ha! Bryce- a smiling frog probably would have tasted better than the blob of non-melted cheese.

Clifford: Our waitress was really sweet. It's not her fault the kitchen had no pride in what they're doing.

Bryce: You've been reading too many children's books.

French Onion Soup, IMHO, should always be served in a crock.

I've been to Sierra Bistro several times -- loved the food! Maybe you should give it another chance -food, atmosphere and entertainment at night have all been great in my book!

I'm definitely glad you enjoy it - I lived in that town for more than 25 years and I am glad to see places like KFC and Dominos move out and places like this open - but my meal was a complete waste of money. Everything about it, other than the service, screamed "We don't give a damn." If it had been a busy Friday night, maybe I would consider that these things happen - but it was one o'clock on a Saturday and there were only two other tables occupied. How the hell do you turn out food like this, unless you just simply don't care?

There are several other places in Sierra Madre where I would rather spend my money.

Too bad you're so closed minded not to give it another try! I know from friends, that the chef, after being in New York Country Clubs for 6 years to gain experience, puts a lot of pride in his food - probably one of those "glitches" with new personnel when a restaurant is getting in new help when you where there.

Just had dinner there Saturday night and the food was wonderful the 4 of us enjoyed our meals. I had the salmon - tasty and moist, and the desserts were great we had the apple pie, carrot cake and Red Velvet cake all were delicious.
We all want to return next Saturday to try something else on the menu!
Chef Sean is very cordial- he came out to greet us and ask how we enjoyed our meal!

Yes, closed minded, that's exactly why I won't be returning.

Sorry Mr. Blogger, but I would have to disagree with you, and agree with some of the other Anonymous posters here. Not about the closed-minded part so much; but that one unsatisfactory lunch experience should cause you to completely write-off the place in such a negative manner.

In our experiences, dinner was far better than that of our lunch experiences.....but that's neither here nor there. We have been WOWED every single time we've had dinner here, and are thrilled that this place has improved so much. It’s also lovely to have good options in this tiny town of ours.

I'm glad you like it and I hope you keep on having good experiences there. If it had just been my fatty sandwich I might consider returning. But serving room temperature fries when there are only three tables is not a simple oversight, it is a kitchen deliberately choosing to turn out sub-par food. I will write off a place for that.

By the way, my name is Justin, not Mr. Blogger. You can tell that because I sign my name to everything I write, unlike all of you Anonymous posters.

Thanks for the response! Unfortunately, it sounds like you've already made your mind up, as is your prerogative. My wife and I also consider ourselves pseudo foodies/critics that enjoy trying local spots and discussing them.

From the looks of it, they have gone through several changes in staff over the past couple of months (particularly in the kitchen), and believe me, we've seen both sides of it. While I am aware how imperative first impressions are; I would hope that in the future you would give up-and-coming establishments such as these more than one opportunity to gratify....before officially [and publically] declaring them “sub-par”. You then run the risk of being associated with those critics that just aren't happy, until they are unhappy.

By the way, my name is Richard, and I don't have an account to sign into with.

Also, have you tried the new Wistaria restaurant that recently opened in Sierra Madre?

Hi Richard. Thanks for leaving your name, I respect that. For a second I thought maybe you were the Anonymous person who posted three times in one day a couple weeks ago - I've been doing this long enough that I know when three "different" anonymous comments appear on the same day - weeks after the initial post, all saying the same thing - that it is usually the same person.

As to your point about "up and coming" establishments, isn't this the same owners and the sous-chef from Charcuterie? I liked Charcuterie fine, as you can read in my review of it.

I certainly understand your point about critical people who thrive on negativity. Lord knows there are many blogs out there like that. I'm not sure how long you have been reading this blog; perhaps you only stumbled across it because of Sierra Bistro? I assure you that in hundreds of posts on restaurants, there are probably less than five places where I have flat-out said "I will not return here." It has to be something egregious.

A sandwich full of fat and room temperature fries on a dead afternoon is egregious to me. As I wrote above, if this had been a busy Friday I would have considered that as a mitigating factor. But there were literally three tables occupied. We got room temp fries; the table next to us got cold fries.

Perhaps I may be making too big a deal of this - I mean, they are just fries - and if you think that, I will not argue. But those fries, to me, just show a complete lack of care. When I was 21 I worked briefly in the fry kitchen of a bar. We always checked the temp of the fries/tenders/potato skins we sent out. If they weren't good enough, we dumped them and made a new batch. If we had enough pride to do that while working in the basement of a bar on a packed night for 6 bucks an hour, I don't think it's unreasonable to expect a place calling itself a Bistro to do the same. So yes, my mind is made up about the place.

No, I have not been to Wistaria, though my parents went last night and both liked it. Have you been to Taco Fiesta? Let's just say if you want to see me write some more positive things, return on Wednesday.