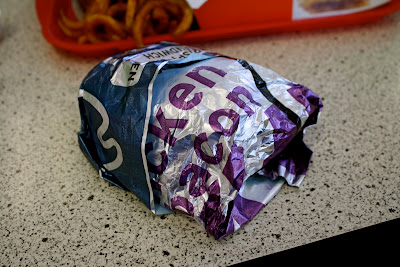 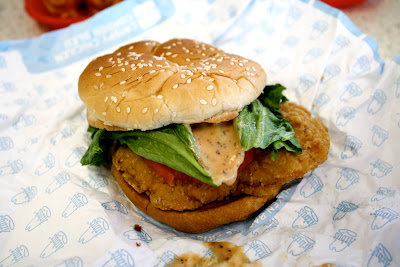 First off, let me admit one thing: despite asking many people, to say nothing of spending more time than anyone ever should searching the internet for this kind of thing, I have no idea what "prime-cut chicken" is. Arby's uses a ™ symbol, so perhaps they made up the term in hopes of convincing us that it's some great cut of chicken. It does sound clever. (Though it's disconcerting that most results from a Google search of the term are about pet food.)

I tried Arby's prime-cut chicken tenders last fall and found them to be good, although basically just larger pieces of their defunct popcorn chicken. When I read about the new "Cravin' Chicken Sandwich," the main thing that caught my eye was the ridiculously-described sauce: "zingy, zazzy, zaucy, zesty Cravin’." I think I know what 40% of those words mean... but at least I like them.

So I decided to give it a try. It was a hot day and I ordered the combo - the sandwich with fries and a drink. I don't know why I did this; I don't like Arby's fries. Whatever. 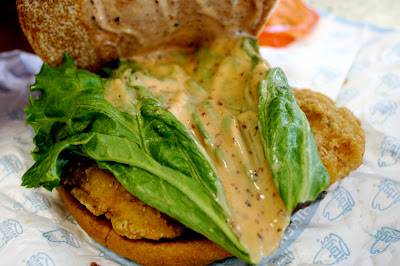 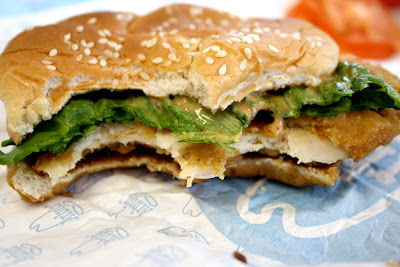 Unfortunately, the chicken was pretty weak. The patty was roughly a quarter-inch and devoid of crispiness or flavor. I've usually enjoyed Arby's chicken but this was the most dried-out piece I have ever had there. (The fried chicken patty I ate over the weekend in the biscuit had more moisture than this, and it was cooked from frozen in my kitchen.) If this had been a buck on the Value Menu, that would have made sense. As the centerpiece of a $7 combo? Not so much.

I really liked the sauce. If they offered it as a dipping sauce for chicken tenders, it would be great. But I cannot give anything other than a thumbs-down to the overall sandwich.

Speaking of the chicken tenders: 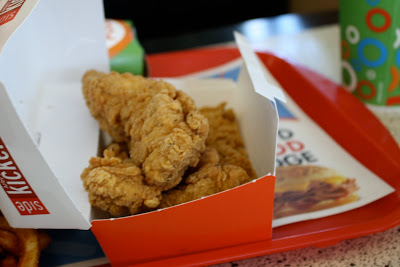 That's what Elizabeth got. She ordered the 5-piece and then was nice enough to give me about one-and-a-half pieces when my sandwich proved to be meager. I pulled the pieces apart and dunked them in sauce and they were very tasty. 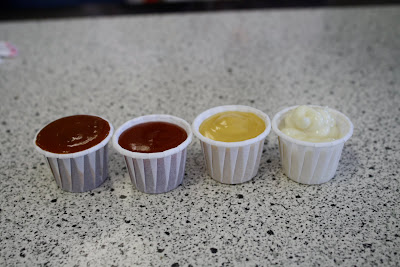 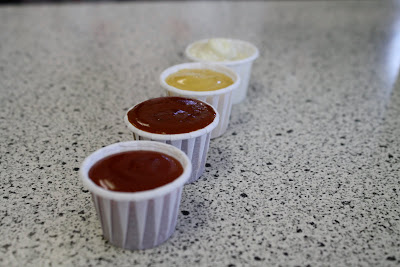 I've always appreciated the fact that Arby's - at least the one closest to me - has serve-yourself dispensers of their sauces. I fill up four little cups every time I go: Arby's sauce, pepper sauce, honey-mustard, and Horsey sauce. All are good, though my favorite is the Arby's sauce and least favorite is the pepper.

By the way, if you're interested in fast food condiments, be sure and stop by the blog later this week.
Posted by JustinM at 11:14 AM