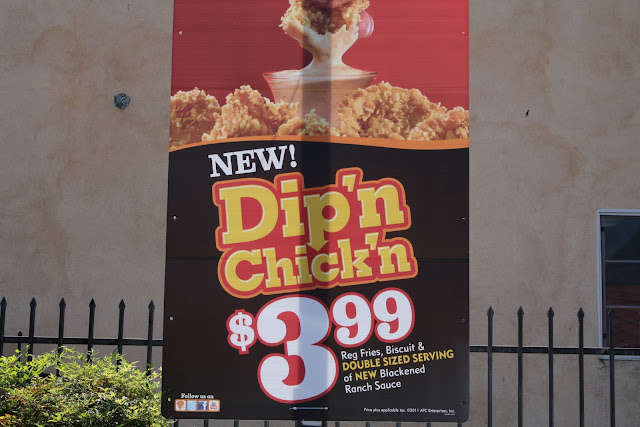 I miss New Orleans. I miss it tremendously. In the first eight years of my adult life I went there four times: in '98 on a road trip, in '00 for Mardi Gras, in '02 for my birthday, and in '04 for Jazz Fest. And I haven't been back since. In the summer of '05 I drove out to Minneapolis with a friend who was moving there. I had planned to rent a car and drive down the Great River Road to New Orleans, but my boss called and said he needed me to cut my vacation short by a few days, so I booked a flight home. I sat in the Minneapolis airport throwing back beers - I hate flying and always need a few before getting on the plane; I know you're not supposed to do that but I've never had a problem - when I watched the hurricane starting to destroy the city. Some of my friends have returned since then, but I never have.

I won't go into stories. Like Las Vegas anecdotes, there is nothing more interesting to you than your New Orleans stories and nothing more boring to other people. But let's just say I have dozens, all of them centered around beautifully brief sentences that I've only head once in my life:

"You alls don't have to go, but it gets pretty boring here after sunrise."

"If you go back to that bar, can you see if my snow globe and disposable cameras are still there?"

"'That elevator broken, use 'da one in the bar."

I could go on and on. I know I said I wouldn't go into stories but I will tell you a brief one about how I came to love Popeyes. In the first 24 years of my life I'd only been there once - my buddy Zach and I went to one in South Central L.A. (it was the closest one to where we lived at the time) to get some fried seafood to cure a hangover. I liked it but didn't love it.

Two years later I was at Jazz Fest, in the Popeyes Blues Tent no less, waiting to hear the great, criminally-underrated Chris Smither. A very large man sat close to me and my friends Kevin and Hatcher. It was easy to tell that fried food was a big part of his life. But he was also very friendly, and he struck up a conversation with us. Upon learning that we were from the Los Angeles, he started running down the list of items at KFC and explaining why each comparable item at Popeyes was superior.

I would love at some point in my life to be as much of an expert on anything as this guy was on fast-food fried chicken.

Anyway, this guy was nice enough to stop talking once the music started, and I don't remember saying another word to him. But I was suddenly craving some Popeyes. Of course, I wasn't going to get Popeyes while I was on vacation in New Orleans - that would be like getting spending the night in Memphis and eating a barbecue sandwich for dinner at Applebee's. (Okay, bad example: I did that once.) So I waited until I got home from that trip, went to Popeyes for lunch one afternoon for the second time in my life... and I've been loyal to the place ever since.

And whenever I hear that they are coming out with a new promotion, I jump at the chance to try it. The newest item, Dip'n Chick'n, sounds quite similar to the Rip'n Chick'n that debuted in July. Right down to the silly apostrophes. But I don't care what a product is called, only how it tastes. I headed up to the Popeyes in Pasadena yesterday at lunch time.

It was a madhouse: there are arrows painted on the ground in the parking lot indicating which way you should drive. Nobody cared, it was a free-for-all. Inside it was hot and crowded. I ordered the food - $3.99 for the chicken and fries; I opted not to get a drink for one dollar more - and stood around to wait. 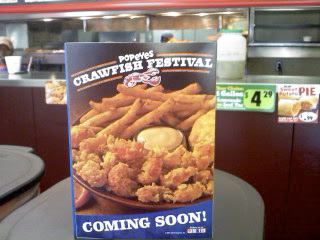 While I was waiting I noticed some wonderful news: Popeyes crawfish are returning soon. This made my day. You could have told me the Angels were going to include Wells and Abreu in a sign-and-trade for Albert Pujols and I would not have been this happy. (Well, that's a bit of an exaggeration.) I took a photo with my phone. After a few minutes, the girl behind the counter handed me a paper sack.

Okay, I thought. I'll just go eat in my car. 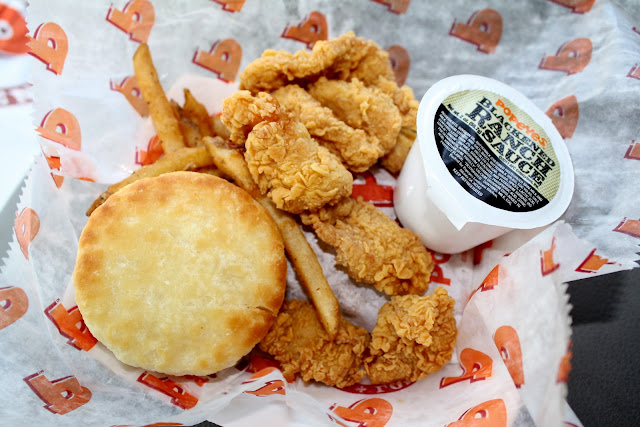 It didn't seem like there was very much chicken. I mean, it's hard to complain about a chicken/fry/biscuit combo that cost me $4.34... but Popeyes used to be a little more generous. (This is even more true with the crawfish every fall. I can't wait to see how diminished the order size is this year.) 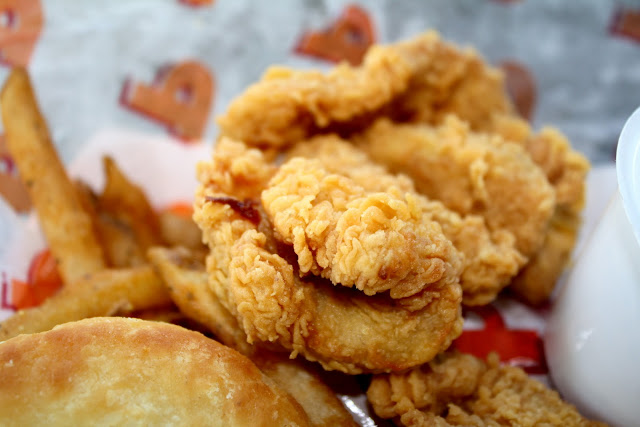 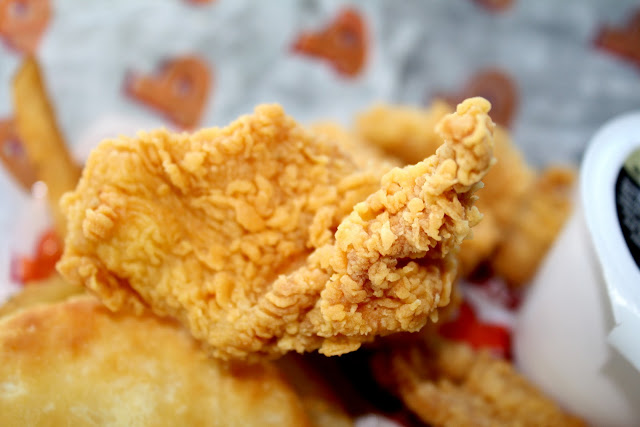 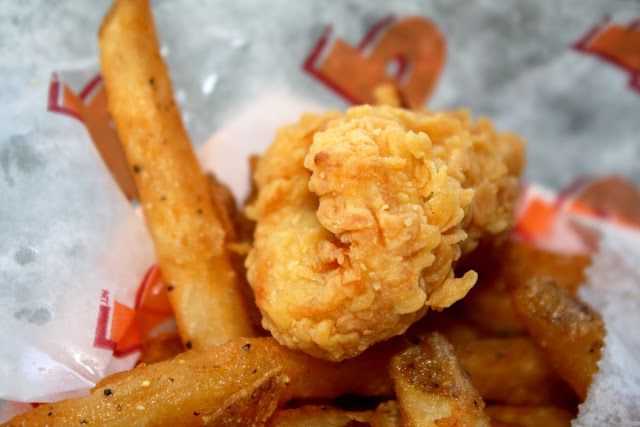 The ads make it look like the chicken pieces are formed into tiny bowls to facilitate the dipping, almost like Tostitos Scoops. That's not how they appear in real life: half of them are closed over like conchigle or seashells, the other half are slightly-bent mini tenders. But just as I don't care what a product is called, I don't care how it looks. All that matters is taste, and these were delicious. There wasn't any spice to the breading, just a crunchy, pleasant flavor, and the chicken was tender and juicy, just like the freshly-cooked chicken at Popeyes always is. 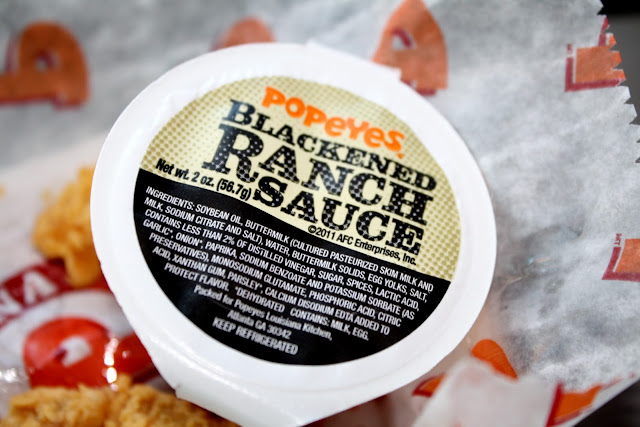 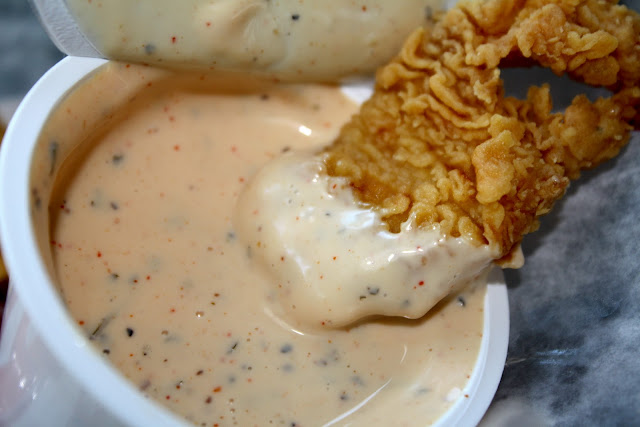 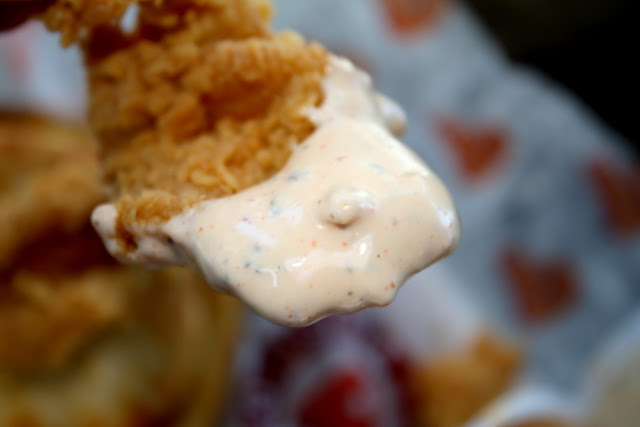 Popeyes used to have three of the best fast food sauces around, maybe the three very best: Delta sauce, spicy honey mustard, and horseradish sauce. Now they don't carry any of them. The Dip'n Chick'n is served with a "Blackened Ranch Sauce," about which I was not excited. I don't dislike ranch, it just bores me with it's buttermilk-y, smooth taste. But this was really good: it was peppery and slightly spicy. I don't remember the last time I enjoyed ranch, but I enjoyed this.

I read a story last month that Popeyes is having positive sales numbers this year and planning expansion, while another chain I don't like - one that almost never comes out with good promotions - is continuing to see declining sales. Offhand, I can only think of one Popeyes promotion that I didn't really like - the garlic butter shrimp. Not surprisingly, Popeyes has come out with another winner with the Dip'n Chick'n. It's probably not going to blow you away. But it's something I would definitely be glad to try again, which puts it ahead of 90% of fast food items.

But man I can't wait to have the crawfish again.
Posted by JustinM at 9:00 AM

I am jealous of your biscuit. I have heard stories (good ones) about the Popeyes buns.

I got honey mustard from the Popeyes on Lake Ave last week to go with my chicken strips.

Matt T: I asked them for some spicy honey mustard yesterday and she said they don't have it anymore. But maybe I misunderstood and she just meant they were out at the moment.

Definitely one of my favorite posts in a while.

Try the "Mardi Gras Mustard" sauce. It is a Creole mustard based sauce with horseradish. It tastes very similar to the delta sauce. Don't let them give you a story about "limited time only." It is available year round here in New Orleans. Have the manager call around and/or order some.

Woah, Brad. I have not been to a Popeyes in NOLA - though I've walked by the one on Canal many times - and maybe there's a different level of service there... but I can't even get the employees here to say more than two words to me. The idea of getting a manager to call around for me never even entered into my thinking.

At the Popeyes closest to my house, they will sell you the tubs of sauce for 10 cents a piece if you want them with something that doesn't include sauce. Also, yes the service in Popeyes here seems to be running at a much higher standard than the rest of the country. It is most like due to the presence and ownership of the Copeland family here. Since Al Copeland died, there aren't any crazy Popeyes here any more (Super Popeyes selling fajitas and beer, Seafood Popeyes selling all types of seafood and the infamous Popeyes Buffet in Kenner that had to be seen to be believed.)

I used to buy the sauce tubs for 25 cents each, and sometimes I would load up on the Delta and horseradish sauces. But the last three times I have been to the Popeyes in my hometown they have only had two options (other than this blackened ranch): barbecue and ranch. Not even cocktail sauce when I got popcorn shrimp. (This is one of the main reasons I keep Trappey's in my car.)

That's an intreguing idea to drive the Great River Road from Mnpls to New Orleans. I'd imagine you have to allow around four or five days. I live right along the Mississippi in St. Louis, and the River Road takes you through a lot of little towns (that's the whole point!) so it really slows you down. I drove up from Biloxi last summer on the back roads, which was really cool, but when you're used to the Interstate, it seems painfully slow. Plus around here at least, the great river road actually isn't right along the river, due to levees and such. Up near Alton, IL, though, there's a beautiful stretch with high bluffs on one side of the road and the river a few feet from the other side (needless to say, that section winds up being closed due to flooding a couple times a year!)

I have a feeling that, much like attending the Midnight Sun Baseball Game, driving the River Road is going to haunt me until I actually do it.

Um, if you make that road trip, I wanna come along. It sounds wonderful.