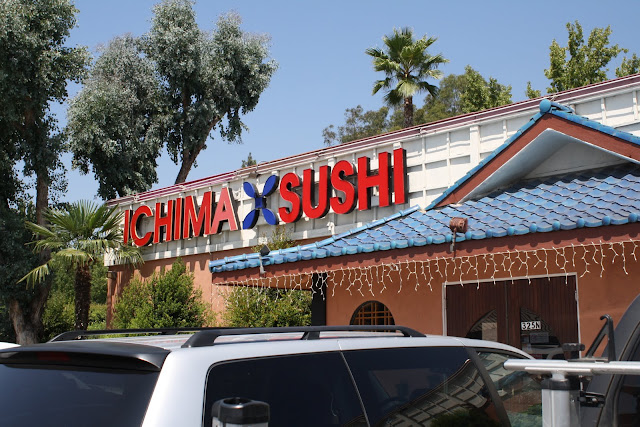 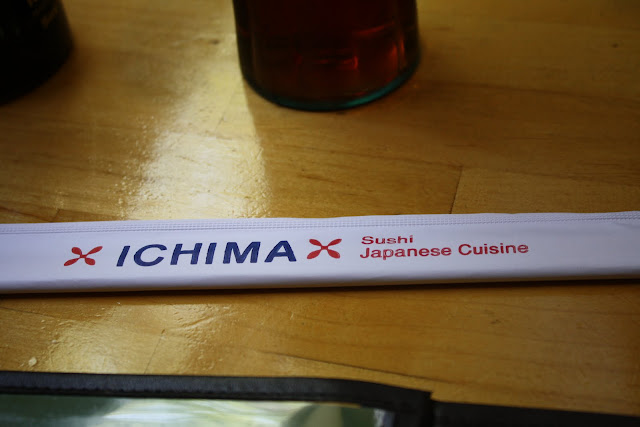 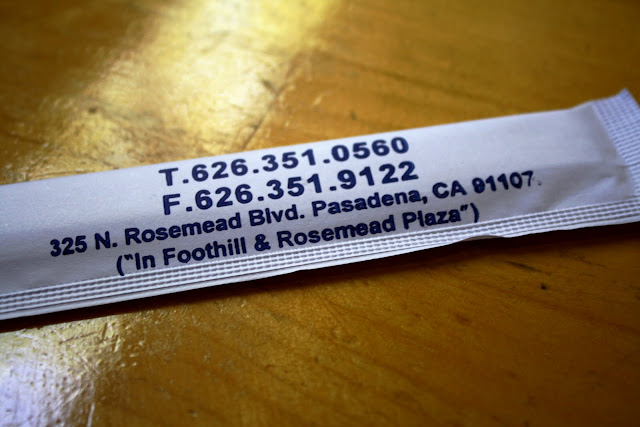 Tucked against the hillside in the back of a parking lot of a shopping center in Northeast Pasadena, I have noticed Ichima Sushi for years. There has never seemed to be a lack of cars surrounding the building during business hours, so I figured it probably wasn't terrible, but I never had much desire to try it out. This is the part of town where the most crowded restaurants at dinnertime are Panda Inn and Islands; for lunch it's Pei Wei and Chipotle. "Adventuresome" is not the word that comes to mind.

But I was going out for lunch the other day with Elizabeth, my brother, and my mom. I suggested we give Ichima a try. We arrived around noon; it was pretty crowded but not uncomfortably so. Several servers greeted us as we made our way to a table. It certainly is a friendly place. 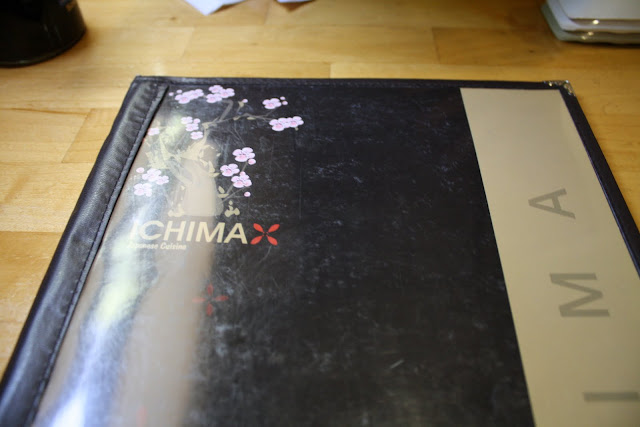 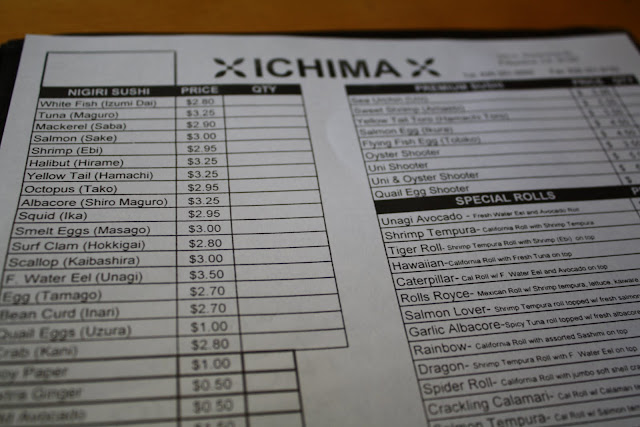 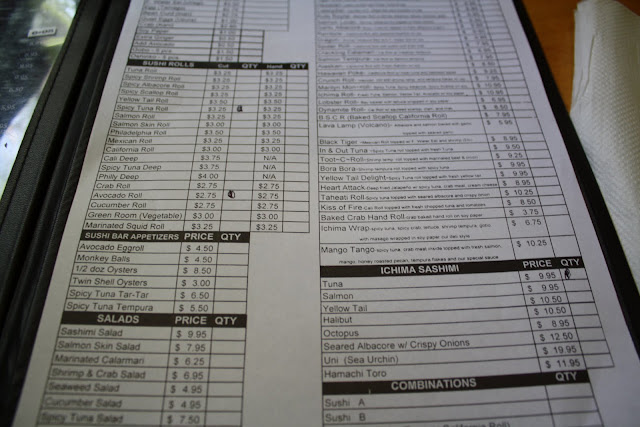 I thought about ordering a couple of sushi rolls, but, knowing nothing about their quality, decided to order a lunch combination: I ordered the chicken cutlet, spicy tuna roll, and gyoza. (All three of my dining companions decided to order combinations as well.)

I also ordered the "sesame chicken" from the appetizer section of the menu.

"As an appetizer!" the waiter repeated. (I normally do not write about the comments servers make. You can safely assume this is foreshadowing.) 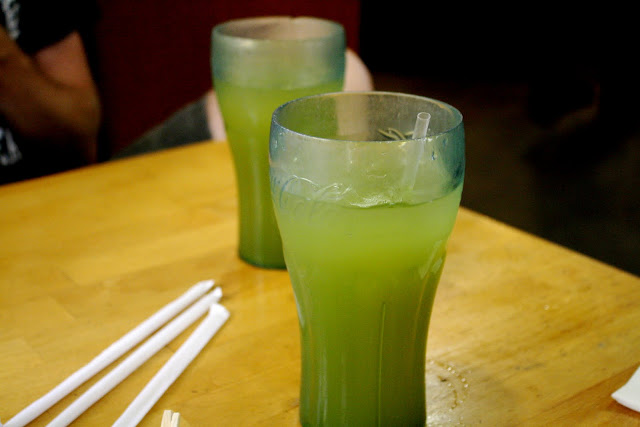 Elizabeth and Travis both had iced green teas, but I stuck with water. 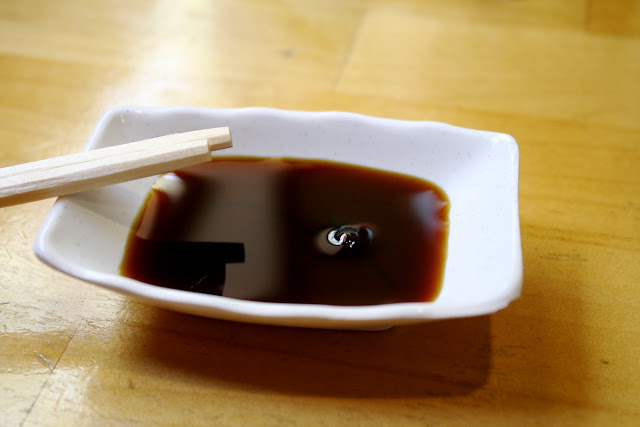 I filled a container with soy sauce, even though I don't really like the stuff. I guess I just wanted to take a picture of it. 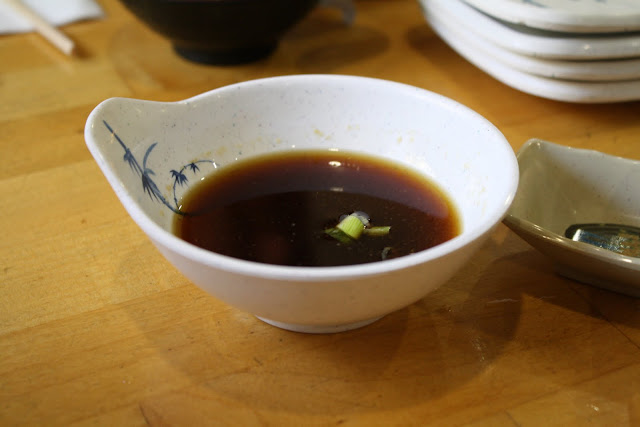 The tempura/gyoza dipping sauce is what I always prefer. 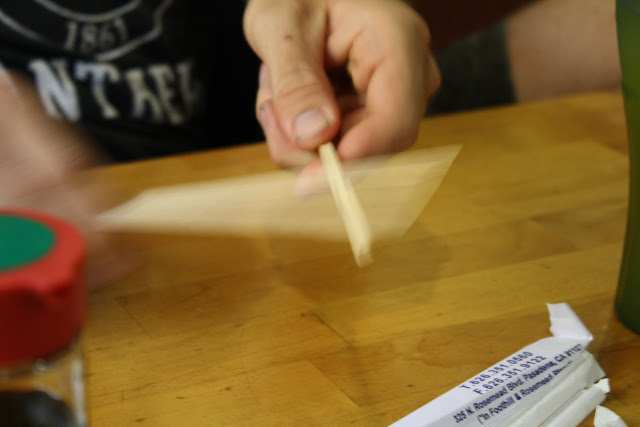 My brother did that chopstick-rubbing thing that some people like to do a little too fervently. But I think he was probably being exuberant so that I would take an action shot, so I give him a pass. 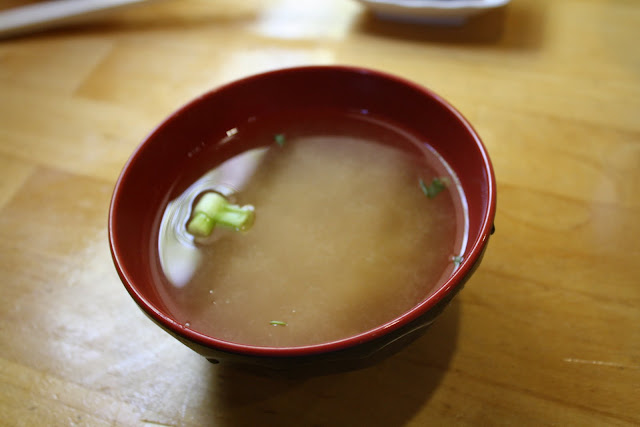 I don't really want to call the miso soup "bad," because that would imply that there was some flavor about it which I disliked. The truth is that there was zero flavor to it. It might as well have been water. 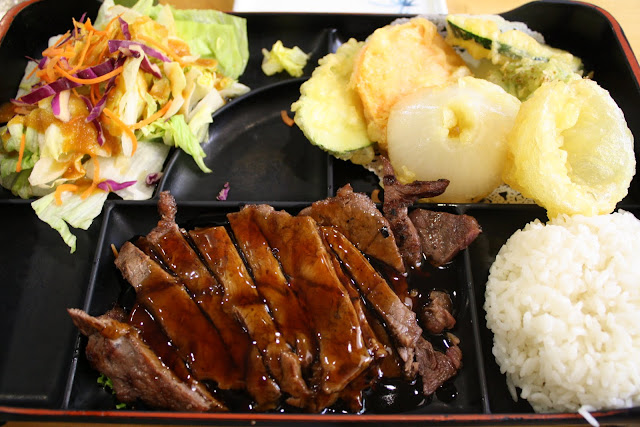 About fifteen minutes after we'd ordered our food, the server came out and wordlessly set down my brother's bento in front of him, then walked away. My brother's choices were beef teriyaki and tempura, which was also the same thing my mom ordered. 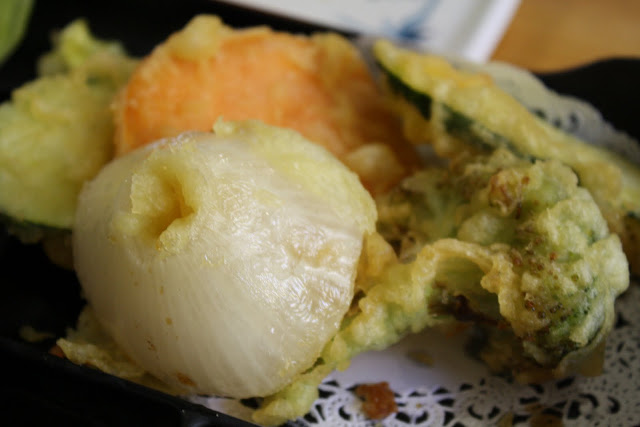 My brother remarked that his onion didn't have any tempura batter on it, so I made him take a picture.

The waiter brought my mom's bento box as well.

"What about the sesame chicken?" I asked.

"But that was an appetizer."

He walked away without saying anything. 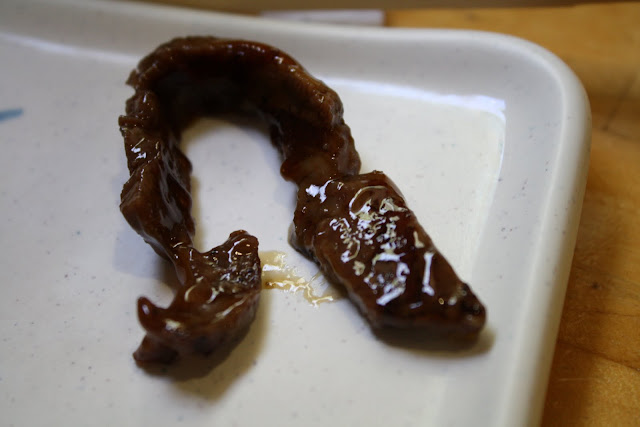 My mom took a bite of her beef teriyaki and said: "Oh my God, this is terrible."

"It's lousy beef and it's so salty." She gave me a piece.

I tried it and I agree with her; it was tough, chewy beef in a salty, sticky sauce. But... so is every single beef teriyaki I have ever tried. This did not taste any worse to me than usual. (So maybe I'm not the best person to judge beef teriyaki.) 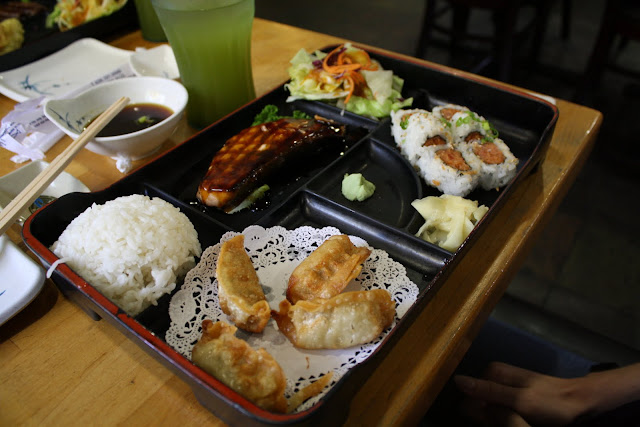 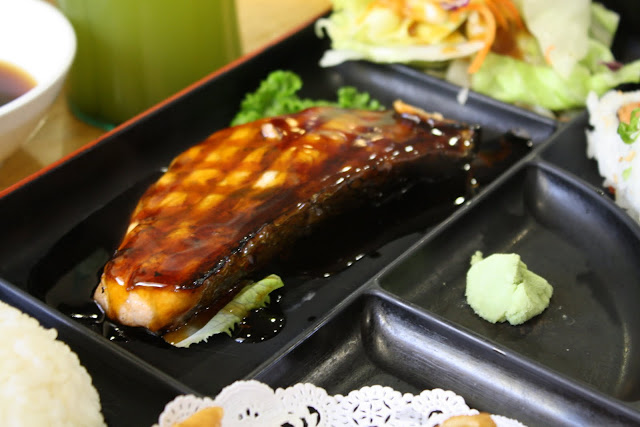 Elizabeth received her food next: salmon teriyaki, gyoza and spicy tuna rolls. She was nice enough to give me a bite, since I was the only person at the table without any food. I did not think much of her salmon. It wasn't terrible, but it was a day or two past being at its freshest.

Right about then a manager came over to apologize and tell me that my bento box would be out shortly. Maybe he will care about our appetizer, I thought to myself.

"And what about our sesame chicken?" I asked.

"What sesame chicken?" he replied with a confused look.

I tried not to lose my temper, but did raise my voice. "We ordered sesame chicken as an appetizer!" (This is when I felt Elizabeth's hand on my leg, a gentle reminder not to lose my patience.)

He scurried off and a few minutes later, the appetizer appeared concurrently with my entree. 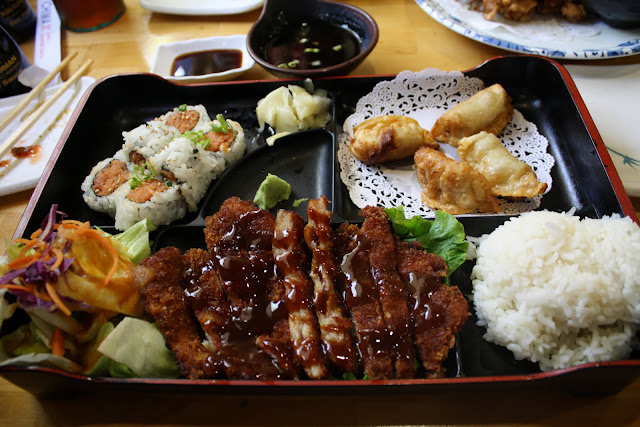 Was this worth the wait? No, not really. 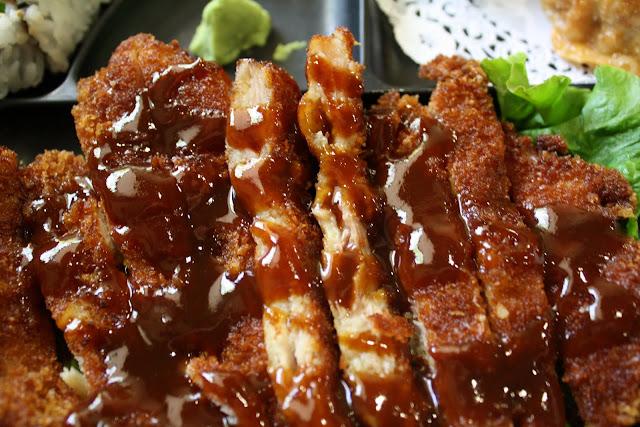 The chicken cutlet was fine. It was over-fried, but with tasty chicken and an understated sauce. I've had better, but I've certainly had worse. 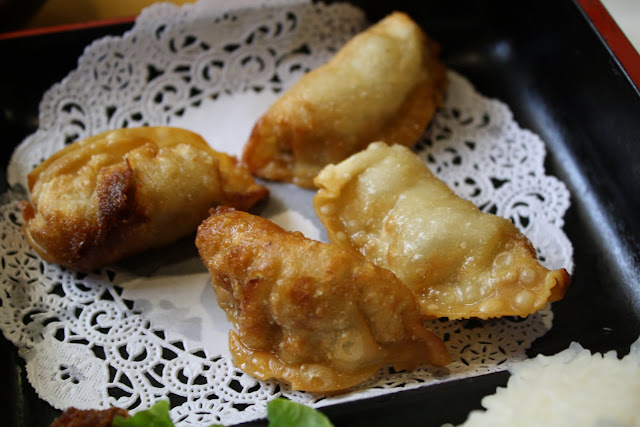 The gyoza were the same things you get at most casual Japanese restaurants. But I usually like those, and this time was no exception. I dunked some ginger in the dipping sauce and mixed in a fair amount of wasabi, heating it up quite a bit, a nice complement to the fried dumplings.

The spicy tuna roll was disappointing. It was slightly spicy and I would have preferred more, but that was a minor complaint. The part that really bugged me was the adjective that kept coming to mind as I ate them: soggy.  It was a soggy, mushy roll that didn't break apart so much as sink into itself with every bite. Have you ever had a piece of sushi so fresh that you think Wow, was that swimming in an aquarium twenty minutes ago? That's what this sushi tasted like, only the exact opposite.

At least it wasn't expensive, the pre-tax check coming out to twelve dollars to person. (I suspect that has more to do with the restaurant's popularity than any of the food they serve.)

Everyone said goodbye and thank you to us as we were walking out, and I returned the gesture, but even at the time I knew I will never return to Ichima. If there were no other restaurants like this in our city, I would probably go back one day and try some other items. But being that there are hundreds of similar restaurants in the area, there is absolutely no reason for me to ever return.
Posted by JustinM at 10:42 AM

This used to be Yamaha and it was pretty good. Only been to the new place once and thought it was terrible. Just as crowded as Yamaha was though - wonder if people didn't notice the change?

Thanks for the warning. I have wondered about it since i shop at the Ralphs in that shopping center.

Matt T: Yeah I go to that Ralph's too sometimes, and that's why I've always noticed plenty of cars outside Ichima. But I guess that doesn't mean as much as I thought.

Anon: Yeah. It speaks volumes. It was sitting right on top. Either no one looked at the food they were serving or no one cared. Neither would surprise me.

I think the most interesting part of this post is the menu pictures. I live in Iowa, and the difference is pretty crazy. It sounds like you guys have sushi places on every corner. In Des Moines, we have maybe 5 places for our 1/4 million people. Also, I can't believe I'm seeing $3-ish for (basic) rolls and $8-ish for a bento lunch. Here, your most basic cucumber roll is $6.50. A comparably crappy bento lunch would start at $17...no salad and only 2 gyoza. Pretty weird. Thanks for posting.

Thanks for commenting. I love Iowa but have not been to Des Moines. Places like this are pretty common - in some parts of town, they pretty much ARE on every corner. So if a place is going to serve mediocre food, they better come up with a gimmick to get customers. Low price points like these definitely help.

yeehk! too bad it was a bust. i hate it when simple food gets so messed up. salmon teryaki with rice is one of my most favorite things in the world.