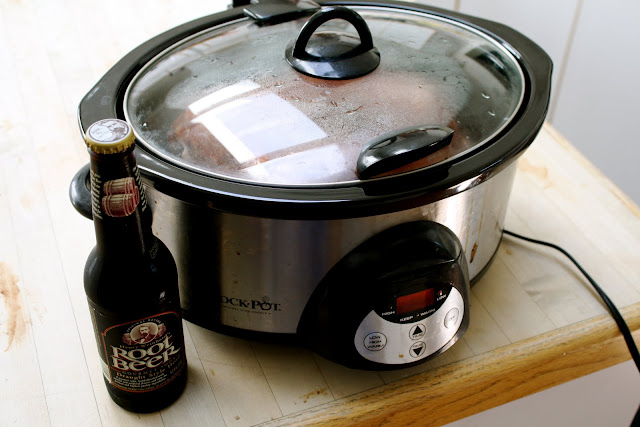 What could be better, on a day spent watching football, than filling the house with the aroma of slow-cooking pulled pork? Someone told me not long ago that the pork butts in the grocery section of Target are really good. I am always up for a trip to Target, so I went and checked it out. The butts did indeed look good, and not expensive. (They were $2.50 per pound - that doesn't sound like much to me, but I've spent enough time around "barbecue people" to know that I would be laughed at in a condescending way for spending more than $1.25 per pound. I once met a guy who said he would have no problem spending more than 50 bucks on gas "driving all over creation" as long as he didn't have to pay more than one dollar a pound for a whole pork butt, just on principle. Barbecue people are crazy.)

I chopped up a sweet onion and placed it on the bottom of the slow cooker, then mixed up some chili sauce with a few splashes of Worcestershire and poured it over the pork. As the final step, I took a bottle of Henry Weinhard's root beer - a root beer tasting of sassafras and vanilla and is to A&W root beer what Guinness is to Natty Ice - and poured it over the whole thing.

It only took an hour and a half before the wonderful aroma started to perfume the kitchen. After a few hours you could smell it from outside. I let the swine sit in the bath of beer and porcine juices for nine and a half hours. Finally, I carefully removed it. 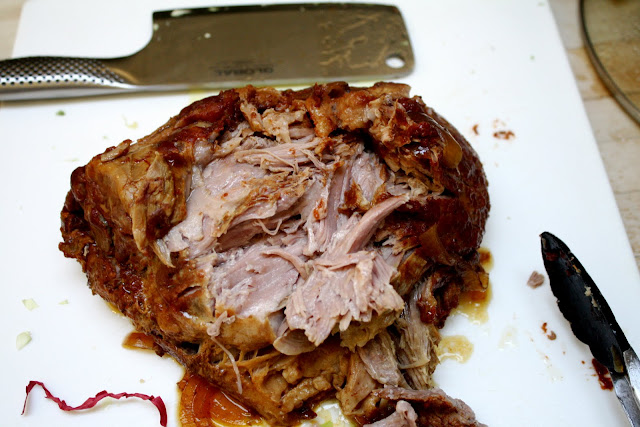 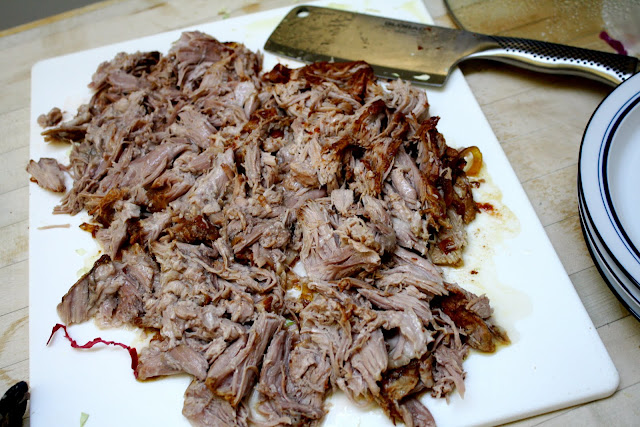 My original plan had been to cut the pork into a few large sections with my cleaver and then shred it with two forks, but honestly, all I had to do was tap the pork with my OXO tongs - probably the piece of kitchen equipment I use the most these days - and the thing started falling apart. So I just grabbed a few baseball-sized chunks, dropped them from a height of perhaps six inches, and the pork shredded itself. 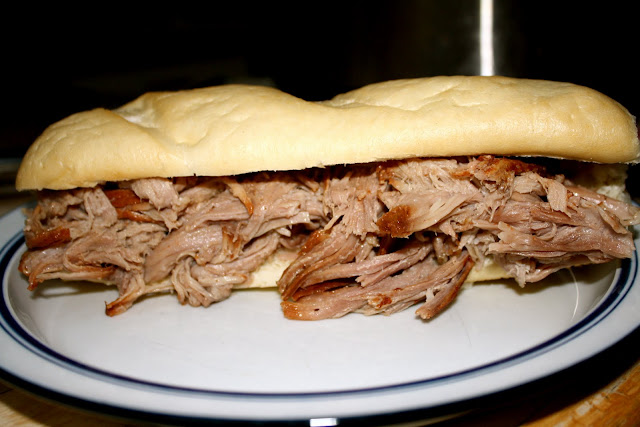 Elizabeth wanted her meat on a long, soft roll, and I was happy to oblige. 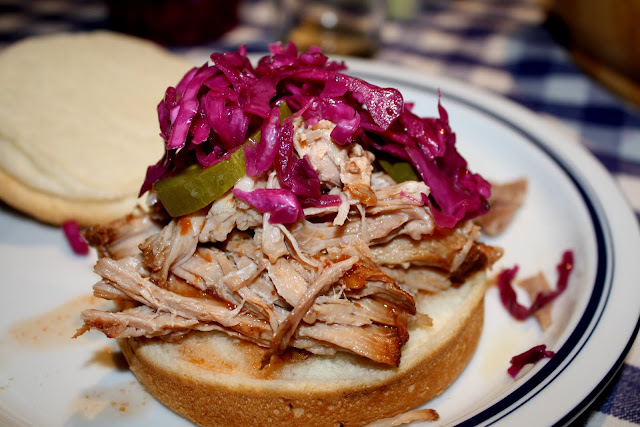 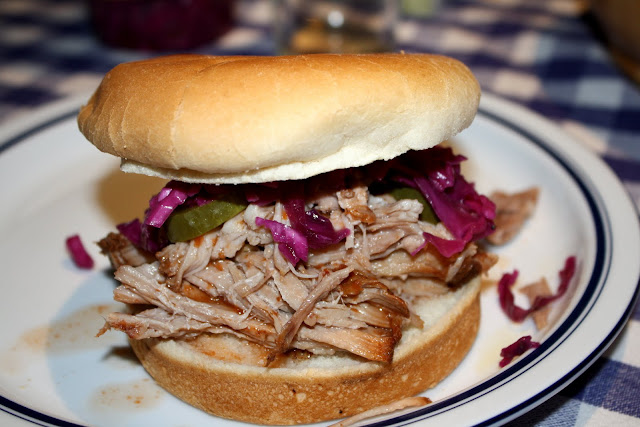 But I wanted my pork on a hamburger bun, so that's where I put it. With some red cabbage slaw, thick slices of dill pickles, and... 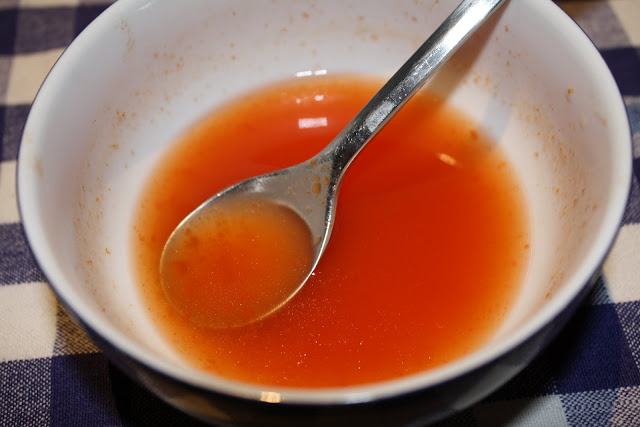 ... an Eastern Carolina vinegar sauce: cider vinegar, cayenne pepper, hot sauce and a touch of sugar. The pork didn't really need any sauce, but I wanted to add a little something, and the whole concoction was already sweet enough from the root beer and the natural juices. I'll be damned if I was going to add any sugary, one-size-fits-all, Tony Roma's-style sauce to this pork. Just some tart vinegar was all it needed. 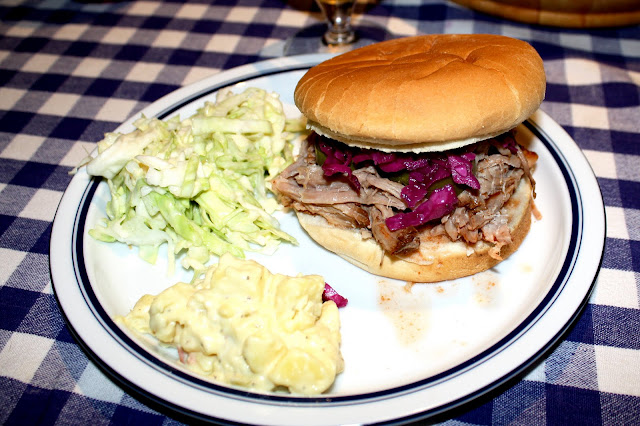 And, because man cannot live on red cabbage slaw alone, I made a green slaw as well. Nothing too fancy to the recipe so I won't even bore you with it, but it was great. And some mustard potato salad that I spent hours slaving over. Well, that's not entirely true, I bought a quart of it at Ralph's for two-dollars. Same thing. 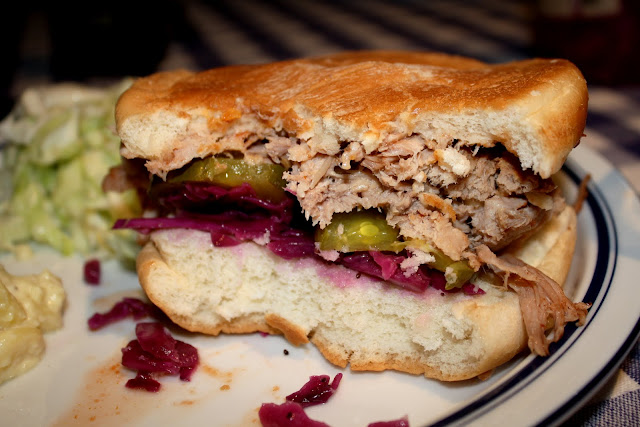 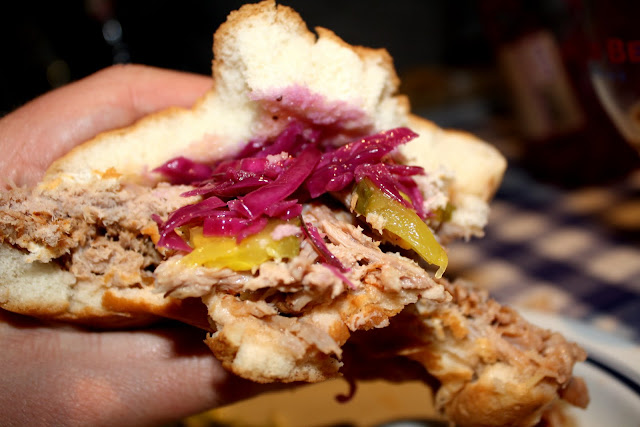 This was one of the best meals I've had all summer. There was enough pork for perhaps one dozen sandwiches (Elizabeth and I both made ourselves sandwiches for lunch the next day) and I have an idea about what to do with the rest of the leftovers. Stay tuned.
Posted by JustinM at 12:48 PM

this is really cool! i love the root bear action, mixed with sweet onions ... and gasp Target heirloom pork butt! Again, my Justin would be swooning over your swine. Dang you!

Justin this looks GREAT! Now I know what to make for this sunday's games :)

I hope you like it ultradave. It's about as easy a dish as you can ever make - perfect for leaving alone while you watch games.