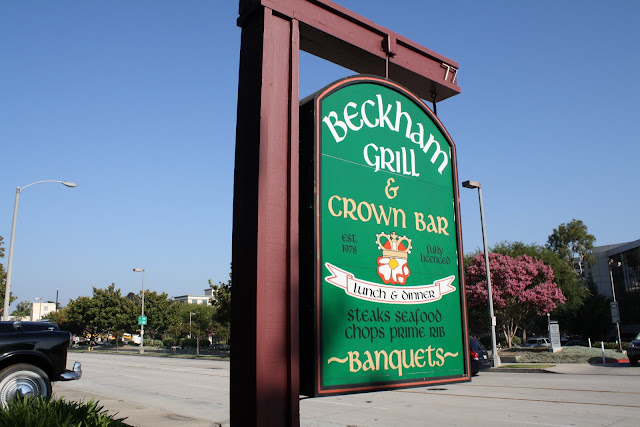 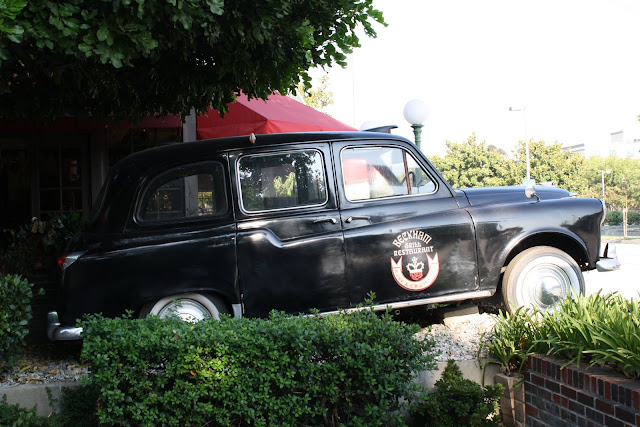 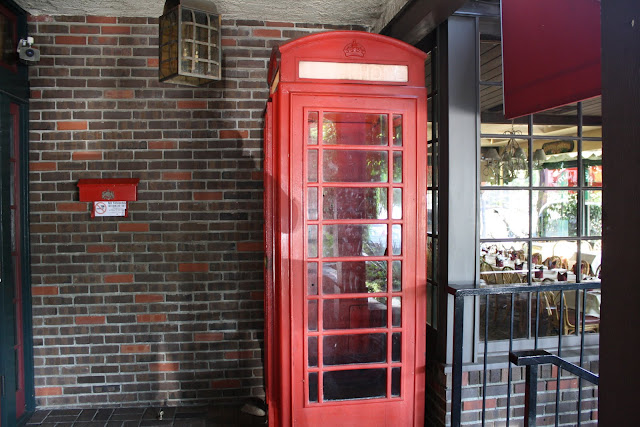 Beckham Grill has been on Walnut Ave. in Pasadena for as long as I can remember. (Their sign reads "Since 1978," which is as long as I've been alive.) And in all the years of driving past, literally thousands of times, I can only remember two meals there: a fish & chips on a cold winter night that was very good, and a slice of prime rib that was pretty bad.
The restaurant itself is pretty old-fashioned: dark wood that looks like it isn't dusted frequently enough, large booths, dark lights, attentive service. And at both meals I had, I was easily the youngest person in the room. (The average age of the customers was probably twice mine.) It's not an unpleasant experience, but it's not a particularly good one. It's the kind of place I imagine my grandmother, were she still alive, would love to have dinner at 5PM. (Though she would find the $3.50 valet parking - the kind where the attendant takes your car and parks it literally twenty feet away - as obnoxious as I do.)
But I still visit Beckham Grill every once in a while, mainly for one reason: the Rose & Crown Pub. In the front of the restaurant, off to the side, is one of the most authentic-looking English pubs I have ever been to in California. The other day a friend and I stopped by. 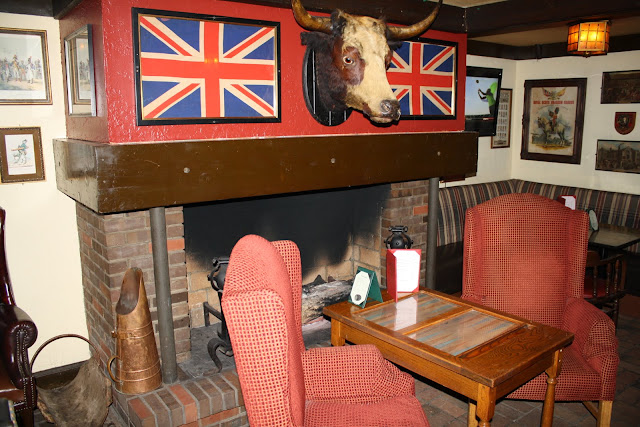 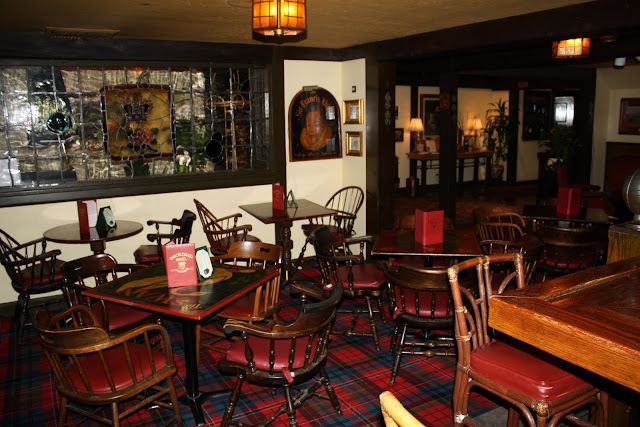 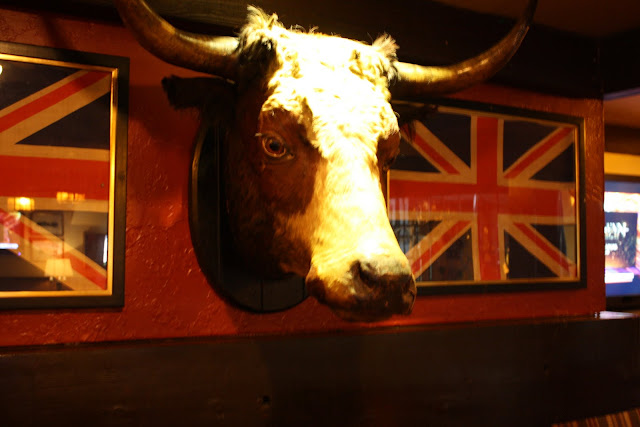 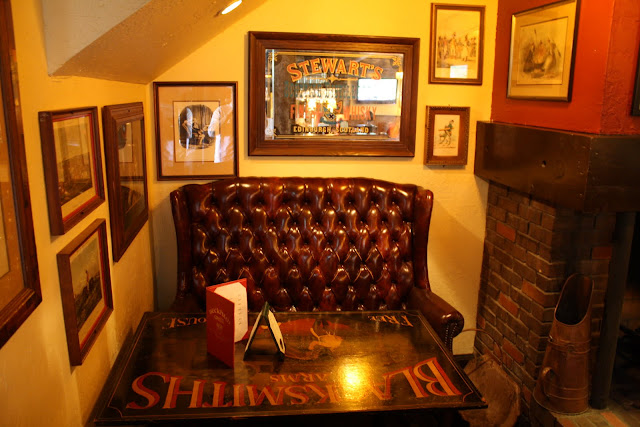 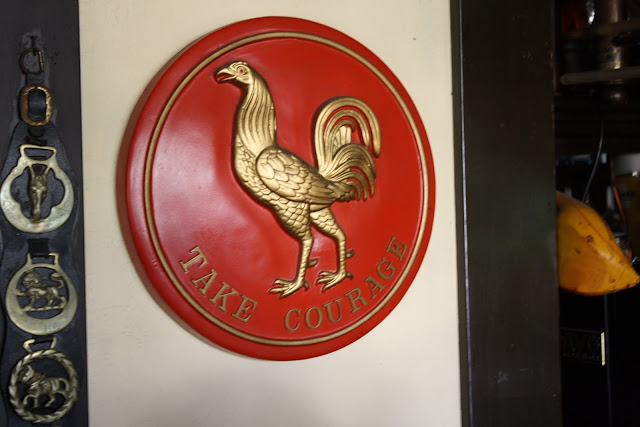 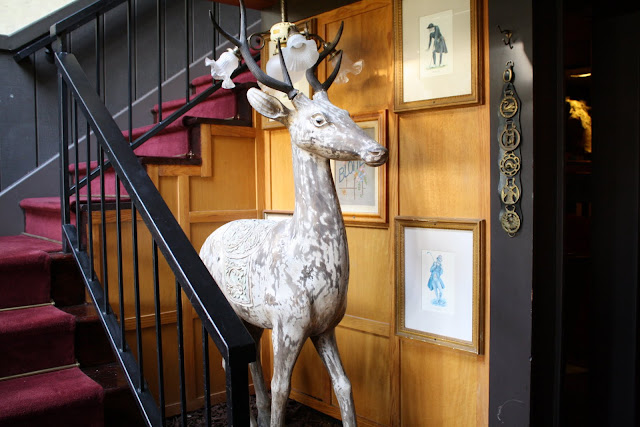 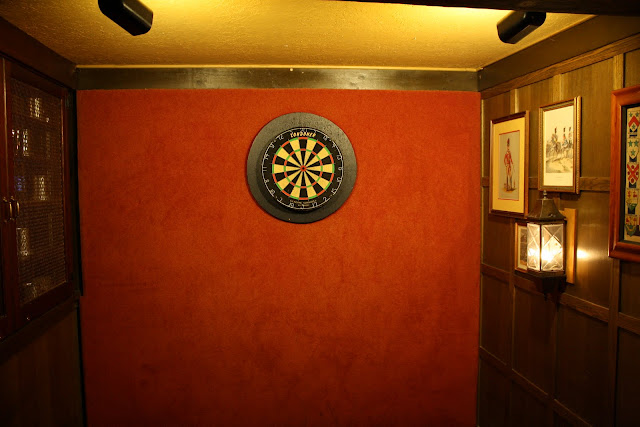 If you've been lucky enough to visit pubs in the UK or Ireland, or perhaps a really great pub here in America, you will recognize a lot of the familiar themes: a fireplace that actually gets used, tables and chairs scattered around, posters featuring the Union Jack - often smaller versions of the flag itself - framed on the walls, tables tucked under staircases, beer signs everywhere, and a dartboard with a dedicated area for playing (not the kind of dart-throwing space where you're constantly tripping over other patrons' tables). 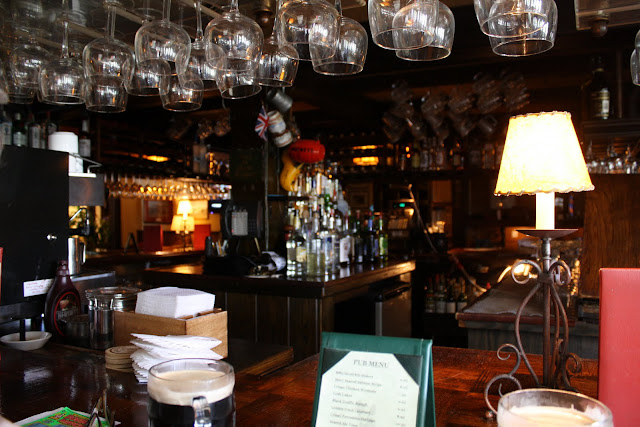 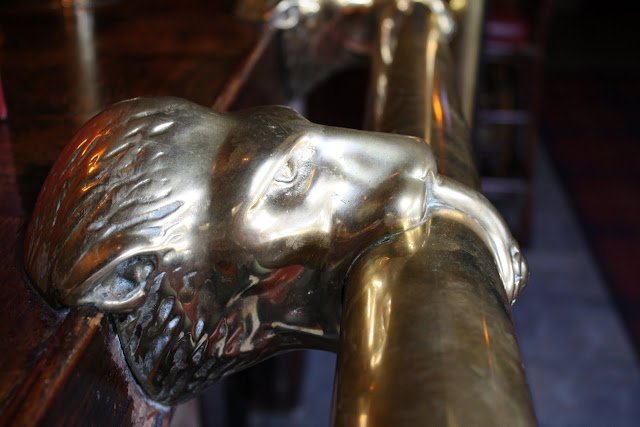 We were the only customers when we showed up, and we took seats at the bar. 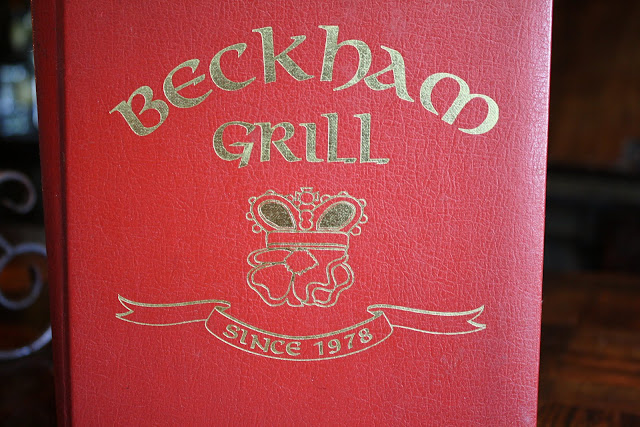 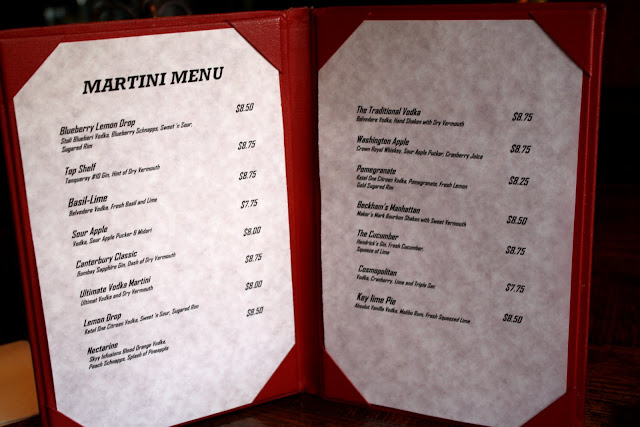 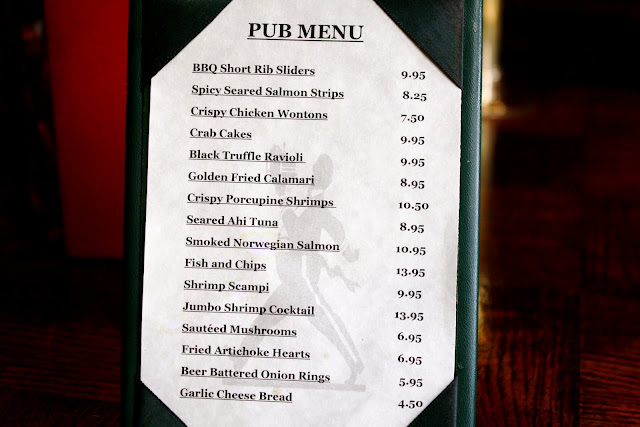 Happy hour in the pub at Beckham Grill is from 4-7PM Monday-Friday. Pints of beer are $1 off (there may be a discount on other drinks, and the pub has an extensive list of martinis and single malt scotches, but I've never actually drank anything here besides beer) and all items on the "Pub Menu" are half price. 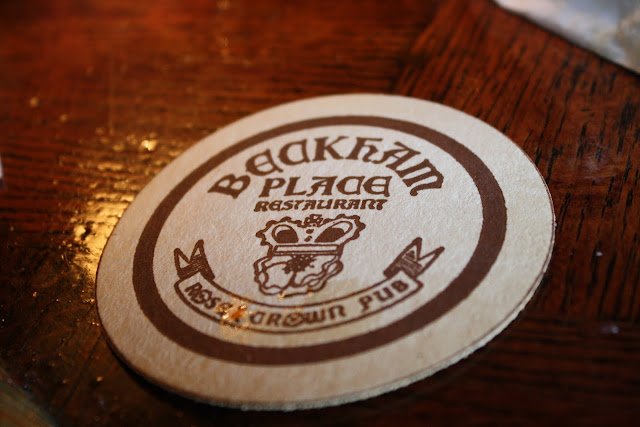 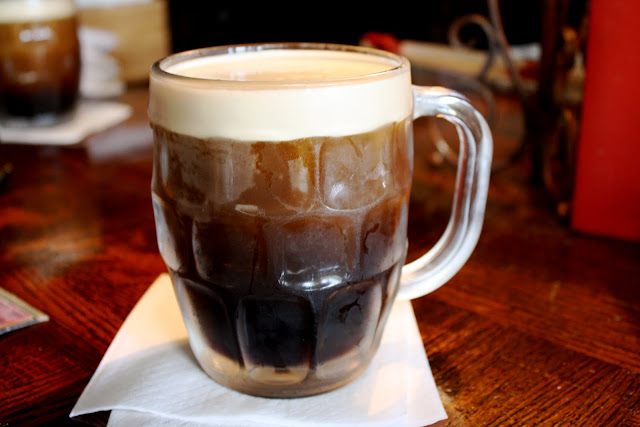 My pint of Guinness, cold and creamy. I can't actually say what it cost - my friend wouldn't let me pay, as I had just made her a nice dinner a few days before - though it was certainly not cheap. I believe they are between six and seven dollars per glass, even with the happy hour discount. 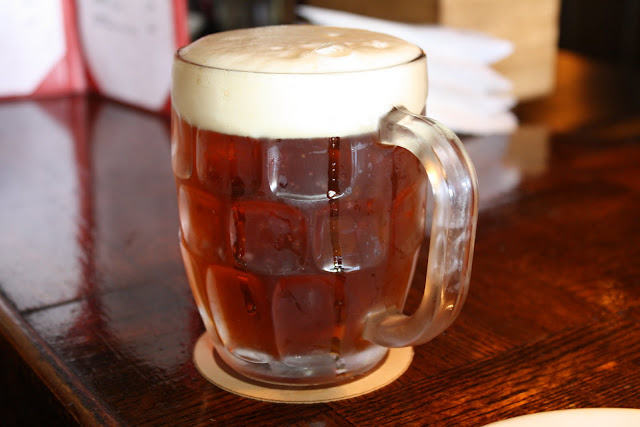 My friend's Bass. Bass is one of those beers that I always forget about, sometimes for years at a stretch, like Harp or Smithwick's, then I return to it and have a sip and say "Wow, I forgot that I liked that." 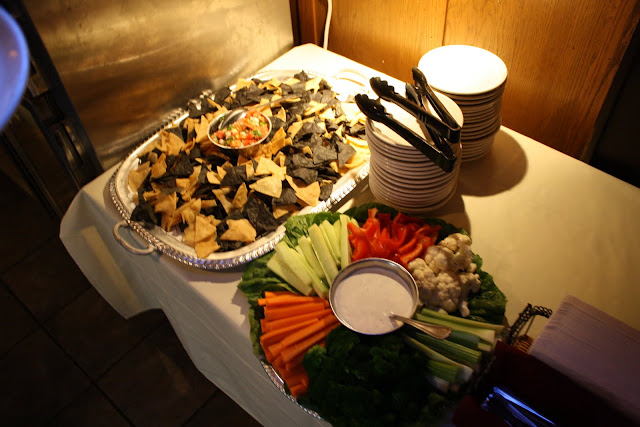 The cost of the beer is mitigated by the fact that there are always plenty of free snacks laid down during happy hour. The first things put out on this day were chips and salsa and crudités. (Often there are ribs and nachos as well.) 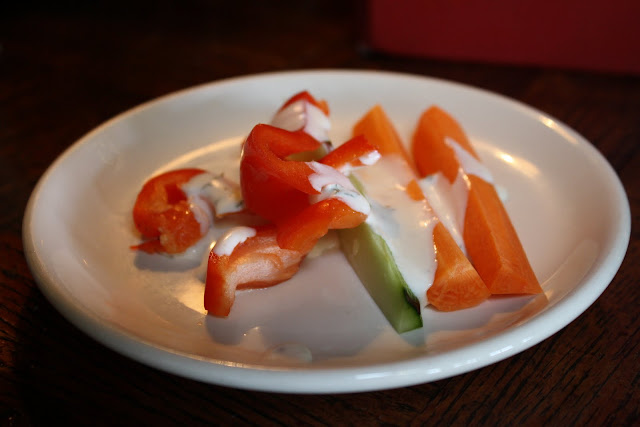 I'm always up for some veggies and dip, especially if one of the veggies is bell pepper strips. 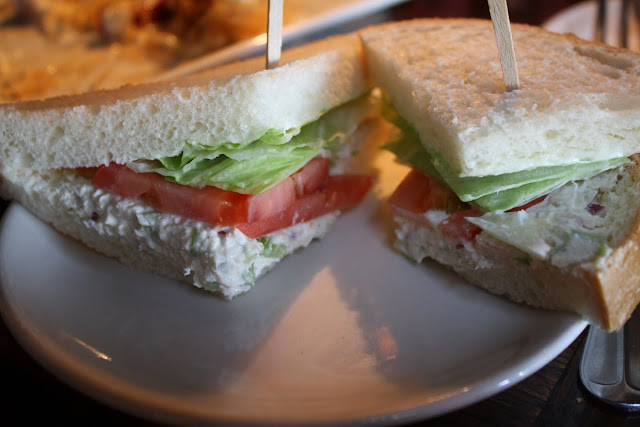 A few minutes after I had taken the picture of the snack table, some chicken salad sandwiches were put out. I'm always up for that, too. (I guess it would just be more accurate for me to say that I'm always up for free food.) But we also decided to order some snacks. 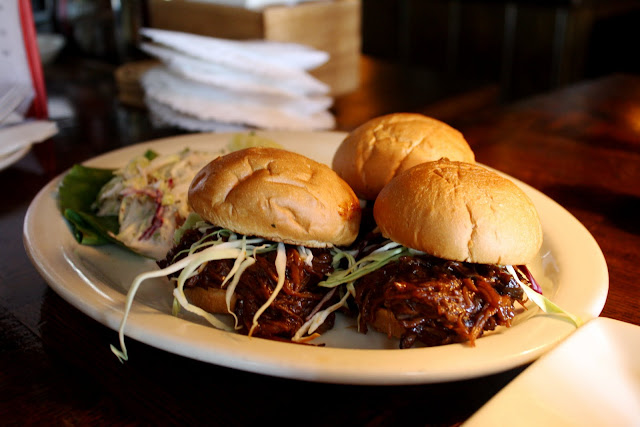 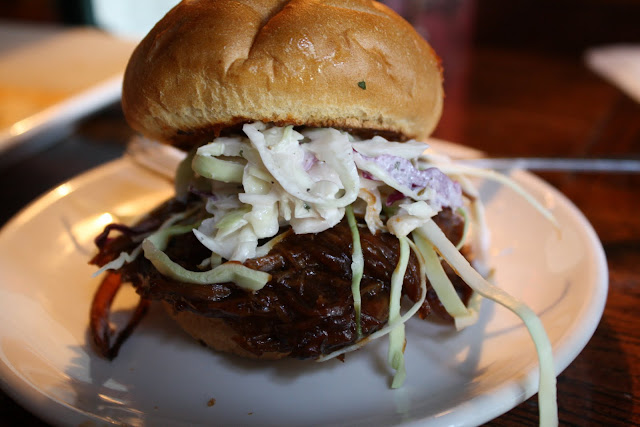 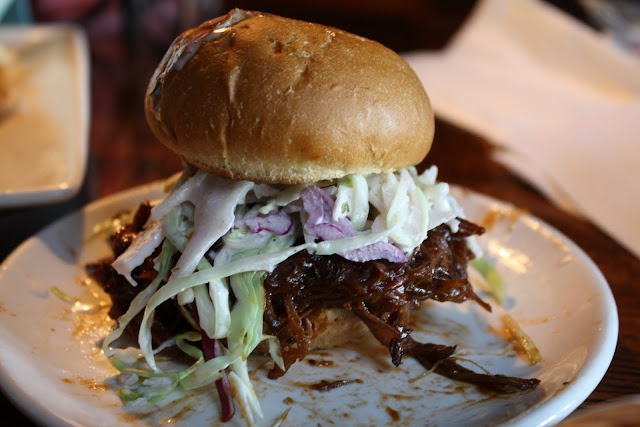 The BBQ Short Rib Sliders sounded good to both of us, and the combination of short rib and slaw was quite nice. Unfortunately, the bread has obviously been frozen and improperly defrosted. The top pieces of bun were soft and hot, with rock-hard, cold sections in the middle. If these had been full price ($9.95) I would have said something to the bartender along the lines of "Are you kidding me?" At half-price, we didn't make a big deal of it. 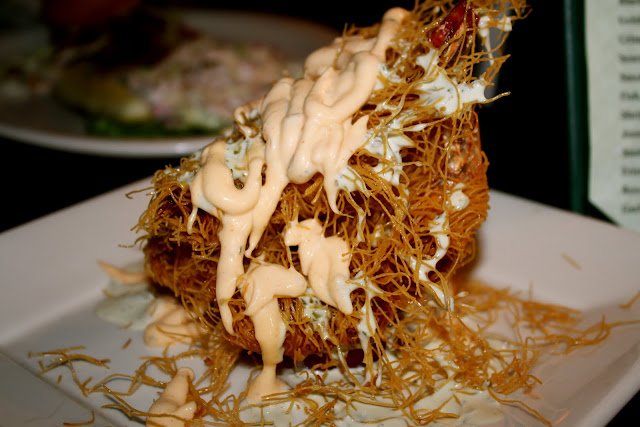 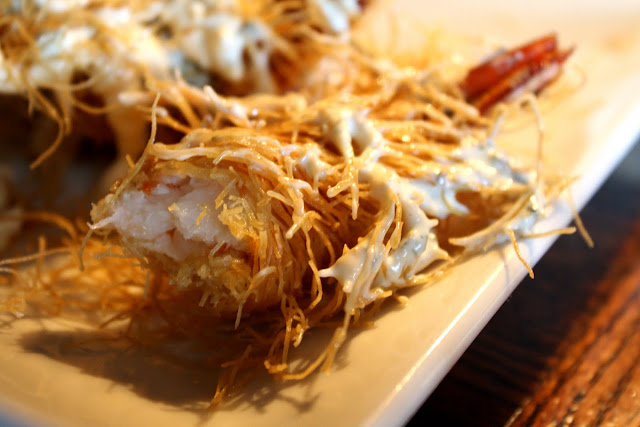 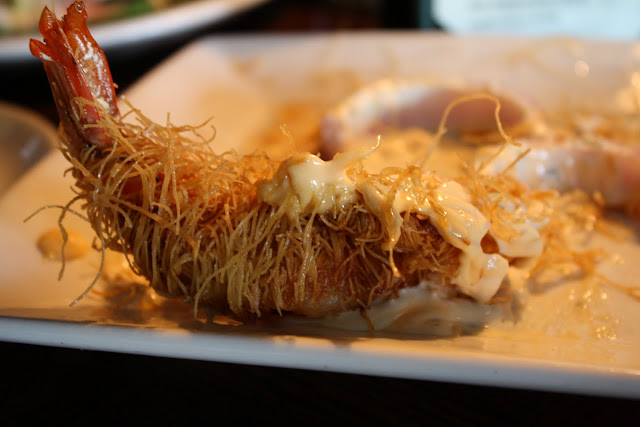 The "Crispy Porcupine Shrimps" were much better: jumbo shrimp, cooked in phyllo dough, with additional crispy wisps of dough wrapping each shrimp. Each bite is, unsurprisingly, very crunchy, and the two sauces - an aioli and remoulade - are both tasty, though I must admit there was about twice as much of each as was necessary. At the happy-hour price of $5.25 for this plate, it's a very good deal.

If you're looking for a happening place or a good deal on drinks, the pub at Beckham Grill is not for you. But if, like me, you enjoy a pint of Guinness and a game of darts on a late summer afternoon, in a relaxing atmosphere where you don't have to worry about "Sweet Home Alabama" blasting on the jukebox or guys blowing pot smoke in your face - only two of the many reasons that I don't go out in Old Town much anymore - then this pub may be just what you're looking for.

I haven't had much experience with pubs - but I gotta admit Justin, I'm a little disappointed you didn't order the truffle raviolis! tsk tsk!

Ever been to the Horse Brass? That was my usual stop in your neck of the woods. Sausage rolls and a (few) pint(s) of Guinness.

That Bass looks awfully good. This photo along with the 2 pints of Marston's Pedigree I enjoyed recently has just cemented the decision for my next batch.

Interesting. The bar has been set quite high.

Yo PP. Glad your shrimp tasted good. On looks alone, it gets a solid F.

those glasses (or mugs?) look beautiful

I dislike paying more than $5/pint for Guinness. And if I were charged a few dollars more and served in a big mustard jar, I'm not sure if I'd be able to enjoy my pint.

The oversized mustard jar here also looks frosted. I have a beef with you types who drink Guinness cold. Room temperature, I say!

I don't like paying more than three dollars a pint for it. But if that's what has to be done for such a nice setting, oh well.

I have a beef with you types who talk about drinking Guinness at room temperature. Guinness in Ireland is served slightly warmer than it is in the USA, but it is nowhere near room temperature. That is just a myth that is repeated by people who have not been to Ireland.

Looks like a great, relaxing place to enjoy happy hour.

Some non-holiday Monday we can go there and get Lucy a little pint glass full of Guinness.

@ Anonymous -
That is NOT an over-sized mustard jar. That is a British "dimple mug". It holds an Imperial Pint (20 oz.) and is designed for the purpose of serving ale.
As far as the drinking of Guinness at "room temperature", it always cracked me up to go to a pub and hear some faux-erudite American insist that their Guinness be served at room temperature. The barman would pull a bottle from the shelf and giggle as he served it. The term "room temperature" is clearly misunderstood by so many. Just like with red wine - room temperature in California climbs far above proper serving temp for the wine, yet people insist upon serving their red wine at 80f because it's "room temp". Please...Use that hat rack of yours.

That place looks even cooler inside than I expected. I’ve still never been there – maybe sometime in my next 38 years. I didn’t realize their bar area was so distinctly separate from the dining area. And free food! Looks great.