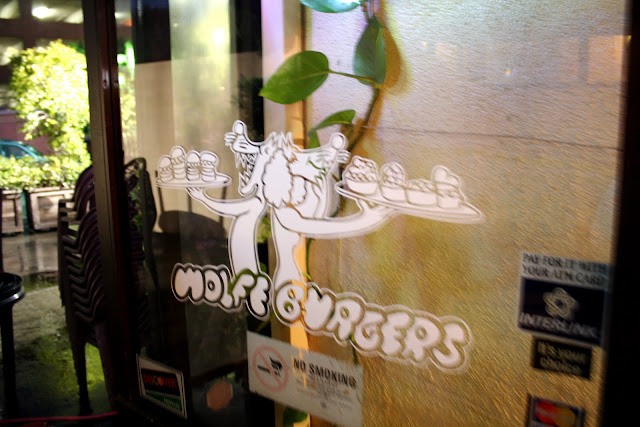 Wolfe Burgers has appeared here a few times over the years, but almost always one of two things: the turkey burger - which used to be my favorite in Pasadena but no longer is, since 1) it's not as good as it used to be and 2) Fatburger opened last fall - or whatever special burger they happened to be featuring when I stopped in.

But recently I had two meals at Wolfe Burgers and decided to try something different. One was pretty good, one was not. 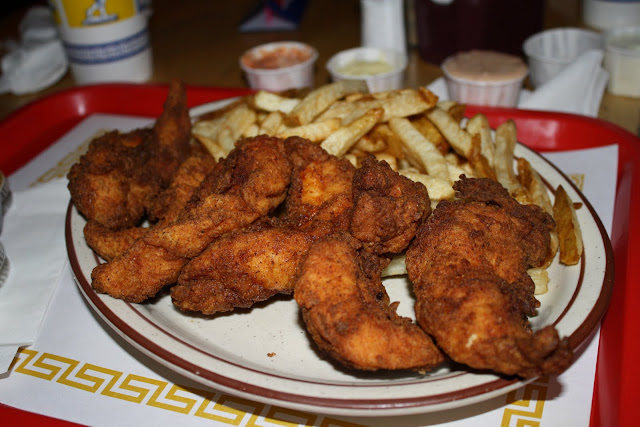 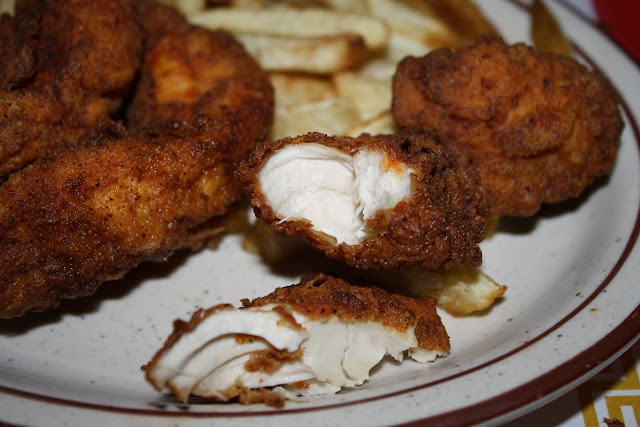 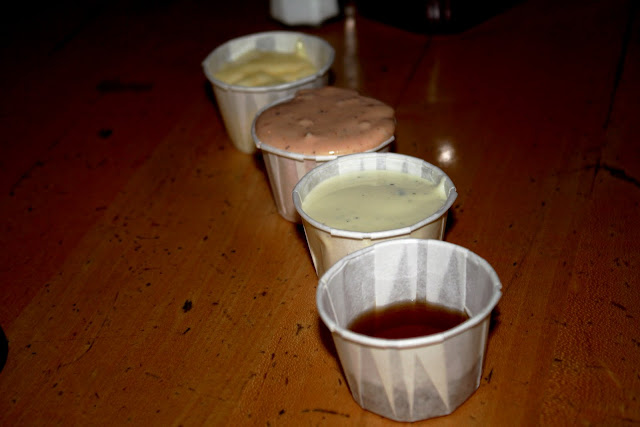 Elizabeth and I stopped by for dinner one night and I decided to try the chicken strips plate. It took a little longer to receive than their burgers, but I was impressed by the massive size of it: five huge pieces of chicken, each about the size of half a chicken breast, covered in spices and blisteringly hot. Unfortunately, two of the pieces were very overcooked, tasting only of the flavors of the spices.

However, the other three were fantastic, some of the best chicken strips I have had in a long time. I could only eat half of the chicken and took the rest home with me. Two people with smaller appetites than mine (which is most people) could easily split this plate.

If I could be guaranteed that none of the pieces would be overcooked, I would order this again. But of course there is never any guarantee, so I won't. But I was impressed with how good the properly-cooked pieces were. 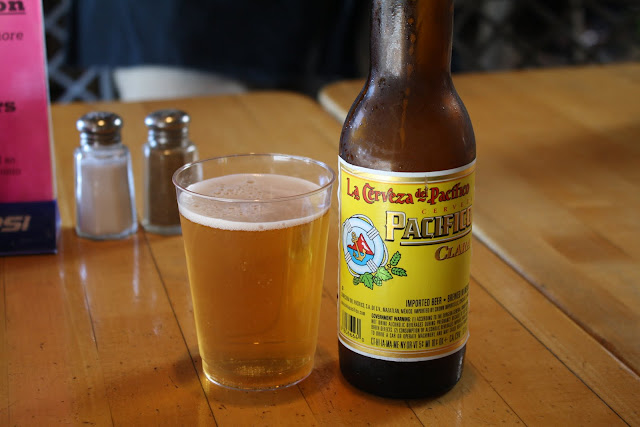 Last month, my friend Carla had the day off and remarked that she had not been to Wolfe Burgers in years. I said I would be glad to accompany her. It was a very hot day and I ordered myself a bottle of Pacifico; unlike most comparable burger joints, Wolfe Burgers serves beer.

And I decided to try the Reuben sandwich. 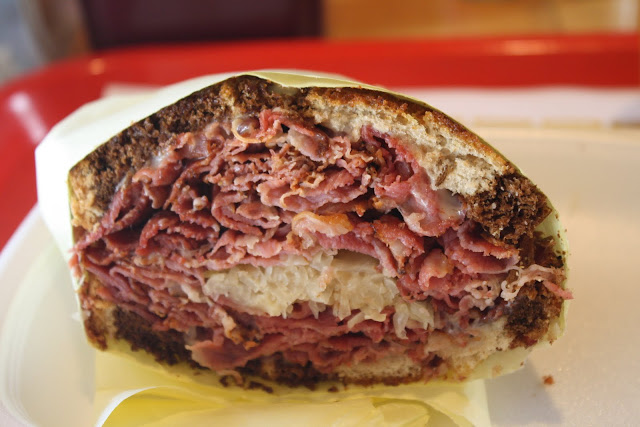 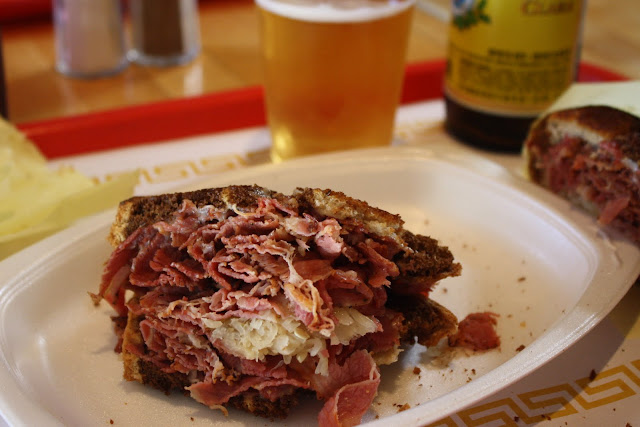 My heart sank a little when I saw the sandwich: it's the thinly-sliced pastrami that, more often than not at a place like this, has no flavor and a consistency of rubber. And sure enough, that was the case here. The sandwich tasted of sauerkraut and Thousand Island and nothing else. Now, I enjoy both of those flavors, but I was hoping for a little taste of pastrami. There was none here. 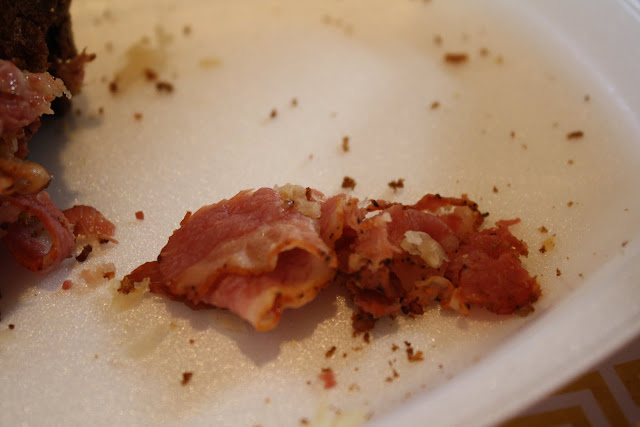 And there were far too many of these fatty pieces. Not as bad as another Reuben sandwich I had recently, where about one-third of the corned beef was fat, but still more fat than I would have liked. From now on I will be sticking with Tops or Connal's when I want a fast-food Reuben in Pasadena.

And I will be sticking with burgers from now on at Wolfe Burgers.
Posted by JustinM at 12:56 PM

I have a lot of catching up to do with your blog! The only pastrami sandwich I've ever had was the one at Togo's. I was sad that I didn't stick to my regular avocado and turkey.

Have you reviewed "The Counter" yet?

I just watched Kitchen Nightmares w?Gordon Ramsey and they were featuring Kingston Cafe. Have you eaten here/reviewed before?

Anna: I haven't eaten at Togo's in more than a decade. I don't think I ever had their pastrami, but if their other sandwiches are indicative, I wouldn't expect much from it.

Jessica: Nope, I never ate there. Remember the English waiter, Matt? He's a buddy of mine. He did not have nice things to say about the owner, which might not surprise you if you watched the episode. Anyway, I was having a beer with him one day when he mentioned that they'd just filmed the show. I thought 'Hey, I'll go review it and then when the show airs people will Google it and find my blog.'

But I never got around to it. I looked at the menu and it just didn't inspire me. (A friend went there, though, on a Saturday night to see the live reggae band, and he said there were maybe three people there and the band finished early.)

And then after the show aired, the owner fired everyone, apparently for "dishing the dirt" - i.e. telling the truth - about the business. So, no, I won't be going there.

I can see why you won't be going there! Why does it not suprise me that she fired everyone? That woman was NUTS!