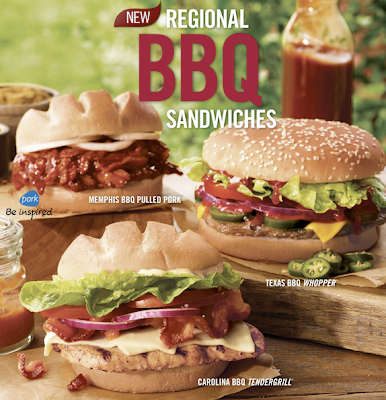 I've wondered for years why a chain like McDonald's or Jack in the Box didn't come out with a pulled pork sandwich. (My money was on the latter.) But a few months back I heard that Burger King was going to do it. I was pretty sure I wouldn't try it; BK is my least favorite fast food chain by far.

Then I learned that BK would be releasing two other "regional sandwiches" at the same time as the pulled pork: Carolina BBQ and Texas BBQ. The sandwiches are available as Whoppers, grilled chicken, or fried chicken.

I decided that I would give one of them a try: the Carolina BBQ Whopper.  It's described as this: "grilled burger patty with pepper jack cheese, thick-cut bacon, lettuce, onions, tomatoes, Sweet Southern dressing and Bull’s-Eye Carolina Style BBQ sauce on a sesame seed bun." 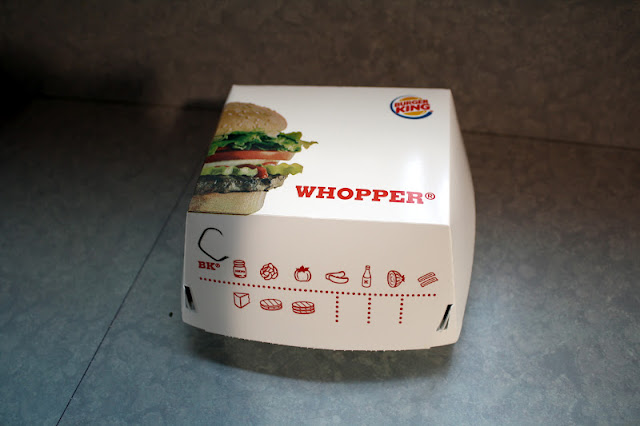 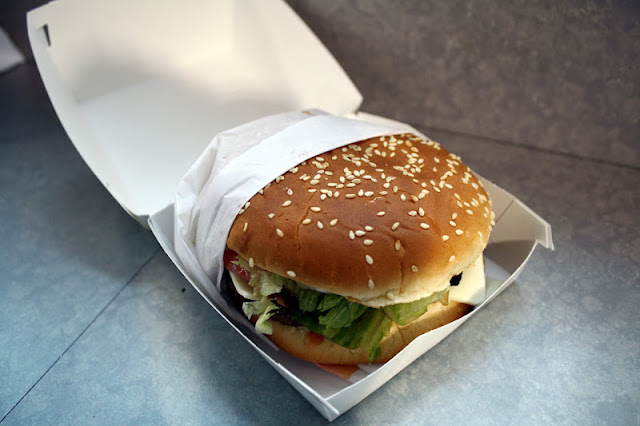 The sandwich by itself was $4.99 and took five minutes to be ready. The bun was fresher than any Burger King bun I have ever been served. That's not exactly difficult to be - BK serves my least favorite of any fast food bun - but this was still fresher than any I can remember. 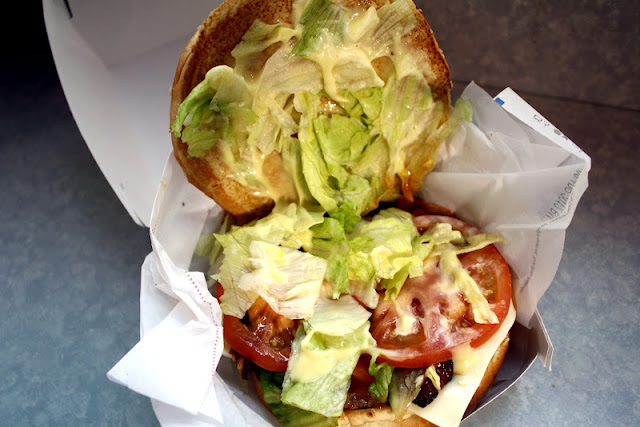 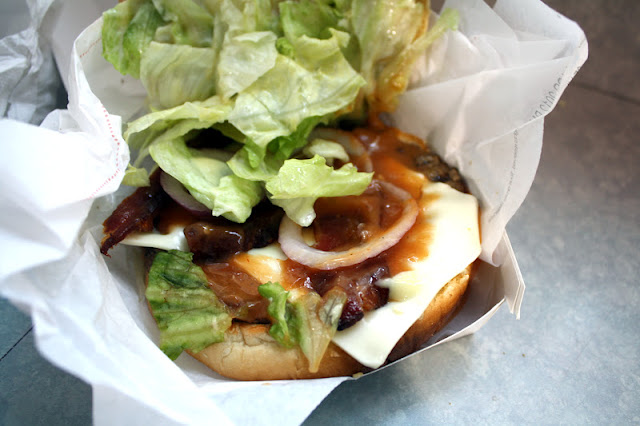 The lettuce was the same watery BK lettuce that is always used. It's not good, but it's not terrible. 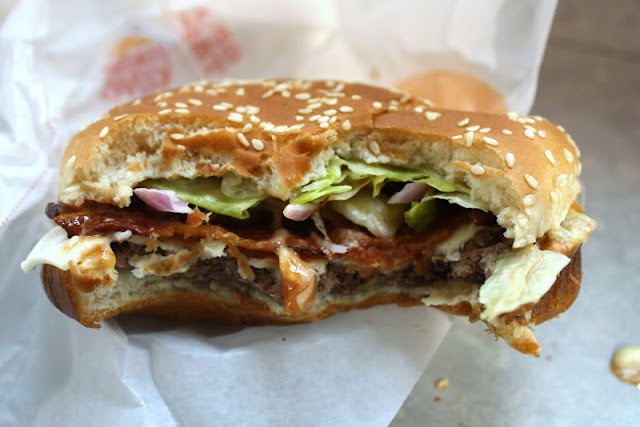 First the positives: the meat did not have the usual Burger King freezer-burned taste that I have experienced with 95% of the burgers I have ever had. The bacon was crispy, better than any I have ever had on a BK burger. And the addition of the Bull's Eye Carolina barbecue sauce was a good choice. I think it might complement chicken better, but I liked it on the burger.

But overall, I did not enjoy the burger very much, and that's due to one thing: the "Sweet Southern Dressing." Have you ever purchased a jarred coleslaw mix? I find them repulsive, sickly-sweet concoctions of mayo and buttermilk. (Anytime I have used such a dressing, I cut it with a lot of vinegar.) That's precisely what this dressing tasted like.

And then I remembered something: when I first read rumors of this promotion a few months back, the sandwich was described as containing something called "coleslaw sauce." Perhaps BK realized that wasn't a particularly appetizing name and re-dubbed it "Sweet Southern Dressing." But it's still coleslaw sauce.

I do not plan to get this burger again. (Unless Burger King comes out with a new promotion that sounds interesting to me, I'll probably never go to Burger King again - there is a Five Guys one block from me and a Shake Shack four blocks away.) I have to say, though, other than the terribly sweet dressing, I was surprised at the quality of the particular burger I ate. It was certainly better than I was expecting.

Maybe I should give that pulled pork sandwich a try.

The only BK I'll ever set foot in is a pair of British Knights.

I can respect that.

Are Yall Yankees? I had the Memphis pulled pork sandwich and it was good. It was probably from a can but people which say that Carolina style slaw sucks shouldn't order Carolina food. I think if they had Lexington style Carolna BBQ it would have probably been better and living in the Carolinas all my life I ain't never heard anyone eating Pepper Jack Cheese on our sandwiches. Again I think its Yankees thinking they know what a Southerner eats.

I definitely would have ordered it WITHOUT any sauce that's proclaimed as sweet. I don't like my BBQ sweet (a la Memphis style), but rather more like Carolina style. And yes, I guess you can call me a "Yankee" now that I'm living in upstate NY. Before that, however, I lived in VA for over 35 years and the best BBQ I've ever had was at the Smokey Pig near Richmond.

Sounds like my kind of barbecue. I love a sauce that is just vinegar and chili flakes.

Hahaha. Yankees. Hahaha. But he is right; pepperjack is not a southern item.

Pulled pork burger is the best of Burger King.If you have not tried it till now you should try it because its simply delicious.

Pulled pork is awesome I was amazed. But different people different taste.

BK forgot the bbq sauce and only put the slaw dressing on the Carolina Bbq burger. Would have preferred the bbq sauce without the sweet dressing. Otherwise, the sandwich was good.

Just had the Carolina Whopper and I will have to say that it was disappointing. Didn't taste like Carolina BBQ sauce at all and I thought that they should have put actual coleslaw on it instead of some sweet sauce. Grew up in Carolina and it is not even close.

Well said. Bull's Eye's Carolina sauce is my favorite of their sickly-sweet sauces, but it's still not like anything I've ever found in the Carolinas.

Whoever "anonymous" is that says this is southern bbq is obviously not from the south either. This is NOTHING like southern bbq, it shouldn't even be compared. That being said, for a fast food burger, it's not horrible. Definitely no thick sliced bacon though.

Billie, there are three main reasons a person posts as anonymous: 1) He or she isn't bright enough to figure out how to enter his or her name; 2) Too lazy to do it; 3) Too cowardly to do it. In all three cases, the odds that the person will have something worthwhile to say are minimal.

I just tried one of the Carolina Whoppers. I was almost afraid to as I tried one of the rib sandwiches and threw half of it away. To my surprise I found this to be the best BK sandwich ever. I enjoyed every bite..maybe I'll go back and try the Texas Whopper just for the heck of it, but that slaw dressing with the Bull's Eye BBQ sauce is going to be hard to beat in my book.

I don't understand all of the bk hate. The veggies always taste fresh. It's a good value. The last shake shack burger I had was positively gross.

Okay one BK needs to recognize that when bacon is put on a burger in the south it is always THICK, second true southern BBQ sauces should have BITE to them not be sickly sweet, and lastly a true southern coleslaw is not watered down sickly sweet but has an honest crunch to it a tad bit of mayo and vinegar for bite. Pepper jack cheese is more for Mexican food and it should have either had some Monterey jack or Colby on it.and no lettuce if you gonna go with a good slaw That would have been a much better burger.