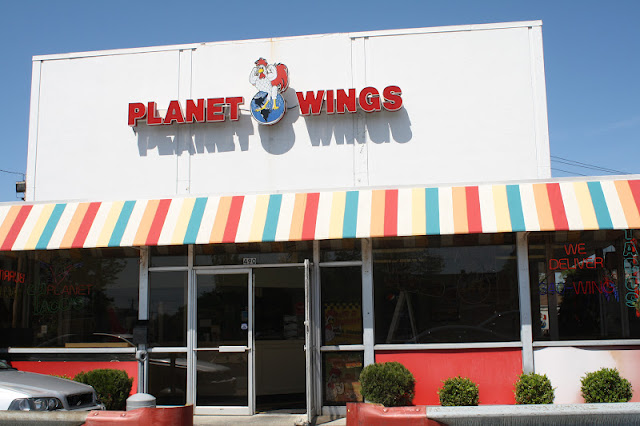 I needed to get that taste of the boneless wings at Atomic Wings out of my mind. Luckily we were up in Kingston, in the Hudson Valley, so we had the chance to visit Planet Wings. I wrote about the place two years ago: they don't make the best boneless wings I've ever had, but they make some very good ones. 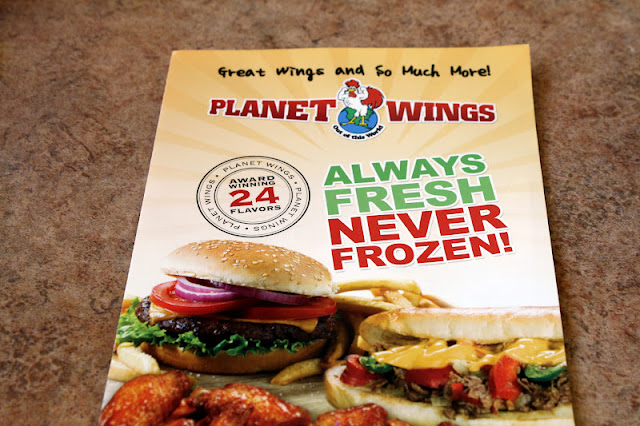 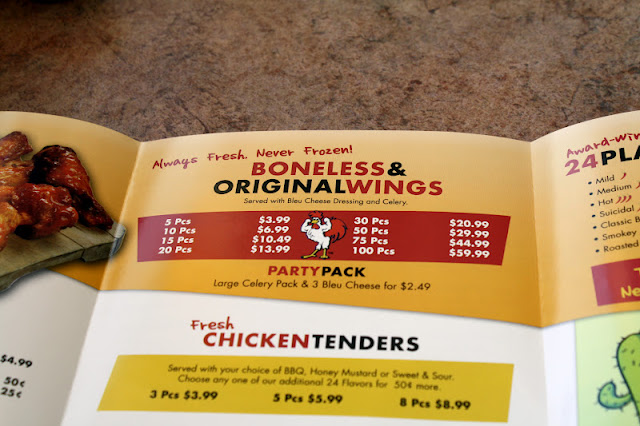 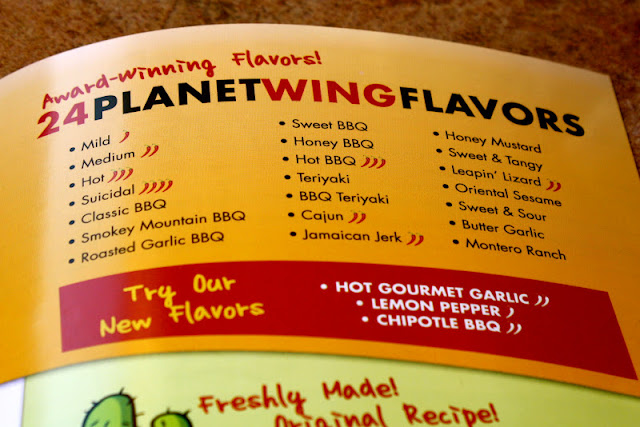 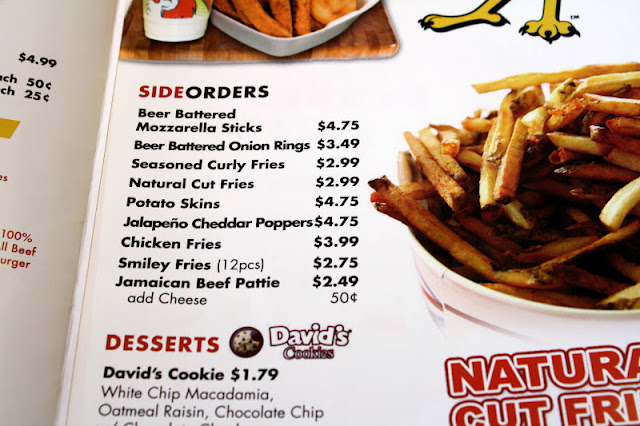 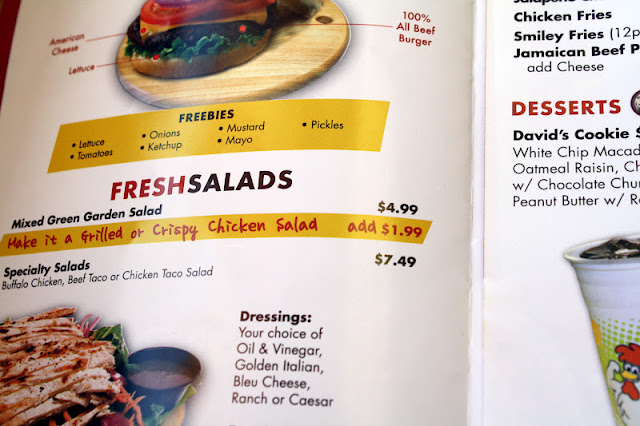 "Do people really come to a place called Planet Wings and order salad?" I asked Elizabeth.

Apparently yes: the next customers were a young couple who both ordered salads. 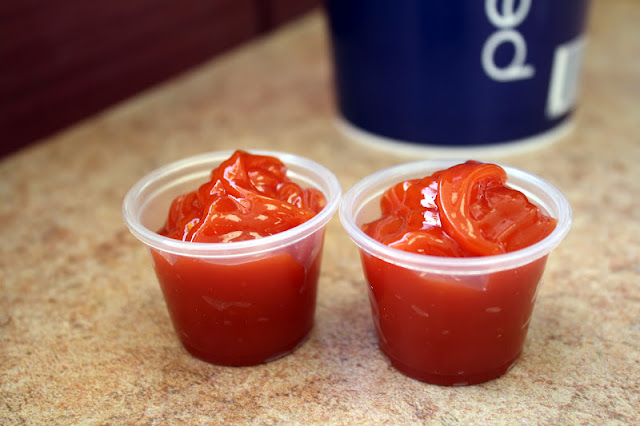 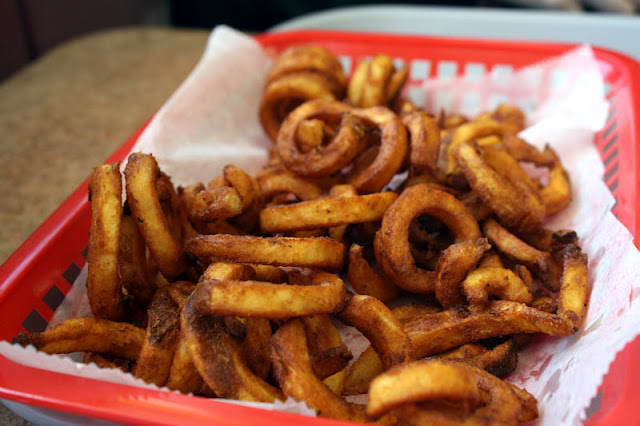 We were both really hungry so we got an order of fries to accompany our three orders of boneless wings. We wished we hadn't for two reasons: 1) predictably, it was too much food, and 2) the fries sucked. They were overcooked, almost charred in several spots. 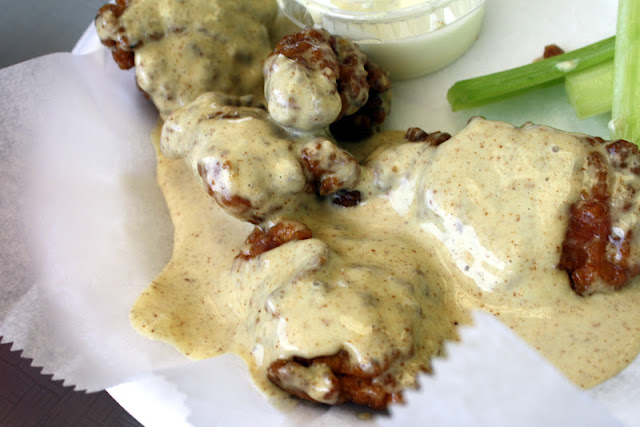 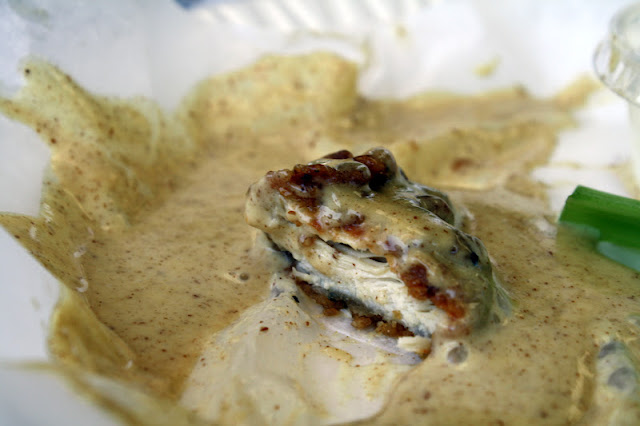 Elizabeth loves the honey mustard wings. I think the honey mustard is very tasty, but I don't really like it on the wings, if that makes any sense. I think it would be good as a dip, but overall I find it too sweet to be soaking the chicken pieces. 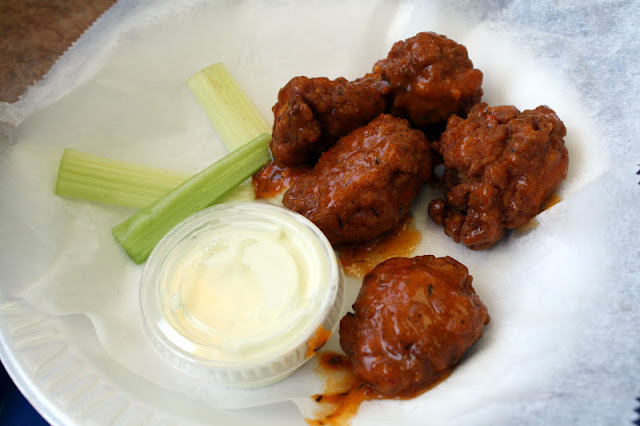 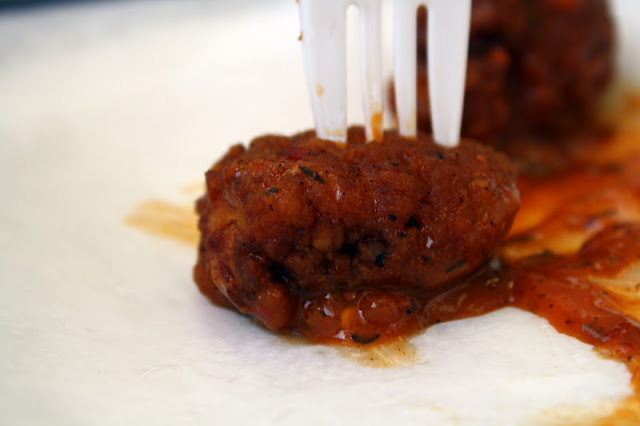 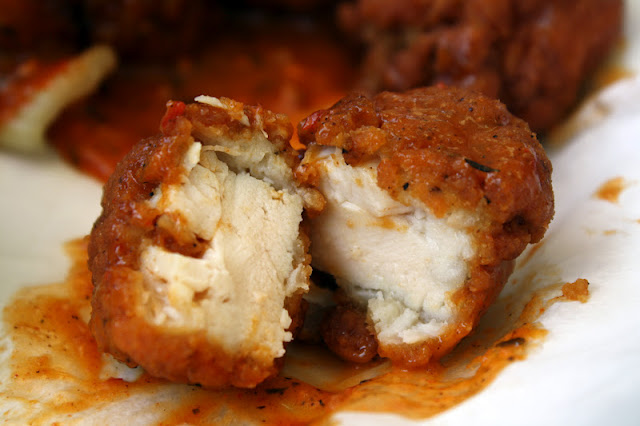 Next up were the Jamaican Jerk wings. We both really liked this flavor: full of spices but not too hot. 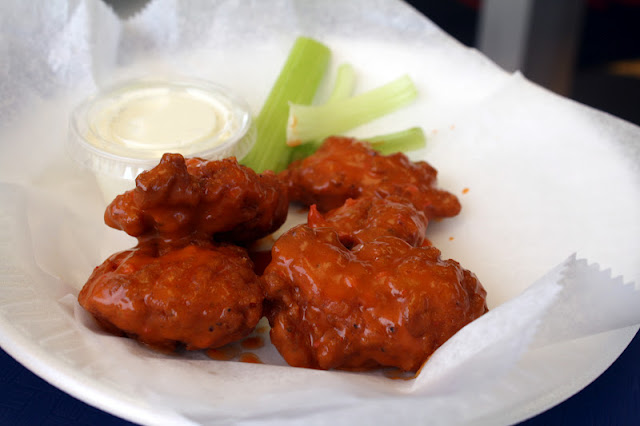 I also saw a "new" flavor on the menu: Hot Gourmet Garlic. I definitely had to try that. It had a good amount of heat - both this and the Jamaican Jerk had two chili peppers next to them on the menu, but this was definitely the hotter of the two - but not much garlic flavor. It's good, but not as good as the Jamaican.

On my next trip to Planet Wings I will be trying the Cajun flavor (because I love Cajun spices) and the Leapin' Lizard (because I'm curious what the hell that is). It may take me another two years to make it back, but I'm okay with that. Planet Wings is good; I wouldn't call it great. I'll take it over Atomic Wings any day, though.
Posted by JustinM at 9:00 AM

I think it's funny when places give names to the flavors but you have no idea what they mean, like leapin lizard. I saw one wing flavor the other day called sunrise. WTH?

I am intrigued by "smiley fries".

I've been trying new (random) things thanks to your blog. Actually, to be honest, I've been buying different things for my friends/family members to try because I'm not very adventurous.

So, in this convoluted way I have a recommendation for you. It's something I found at Super WalMart, so I don't know where/when you'll be able to find it.

Frank's Red Hot Buffalo Shrimp comes in a box in the frozen section. I bought them because the box was $1.98, and it came with a buffalo ranch sauce.

Anyway, they are breaded shrimp (a good size too) that you bake and serve with the sauce that comes in a packet.

Each test-subjects said that the shrimp surpassed her expectations. Even though I think both prefer their shrimp a little more well-done than you would, both ladies said that the shrimp weren't "way" overdone during the recommended baking time. Both said the sauce was flavorful and "hot enough", though one mentioned that the combination of sauce and shrimp bordered on salty. (When I looked at the nutrition information, I did see that the sodium content for one serving is 56% of RDV.)

The package indicates that there should be about 24 shrimp per package for a total of 3 x 3.3 oz servings of 8 shrimp, but there were only 20 pieces. However, the shrimp were medium sized, and I wonder if the nutritional information was calculated for a smaller size shrimp. Also, there is no clear accounting for the weight of the sauce packet, so I wonder if that was included in the net weight, and they forgot to pull it out when they calculated the number of shrimp necessary to equal 10 ounces)

Anyway, if it runs across your mind and you notice them when you're shopping, you may want to give these a try.

I'm sorry. There was a flavour labelled chipotle and you DIDN'T try them? Who are you, and what have you done with Justin?

Michelle: The best boneless wings I have ever had - though I haven't had them for over a decade - was from Wing-It in Boston. They had a flavor called pterodactyl.

Bekah: A quick search of Google Images will reveal all.

ania: I have not seen those. I don't know where a Wal Mart is around here, but I think they have them at a couple of grocery store chains. I will look.

Emily: Well, while I do love chipotle, it is by no means my favorite/favourite flavor/flavour. When there are at least two dozen flavors, I'm probably going to find a few I like more than chipotle.