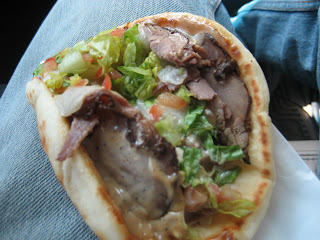 I'm not going to jump too hard on the Rachel Ray dogpile right now. Pretty much every food blogger or trying-desperately-hard-to-be-hip food writer has made a comment about her, so I'm not going to here. The record will show that I started kicking her long before she went down, long before most people knew who she was, and I do not feel bad about that.

But I will say that of all the annoying trends she has perpetuated, referring to sandwiches as "sammies" has to be near the top of the list. When I first heard that Quiznos was coming out with a product called sammies, I vowed never to eat one. Of course, like most hard-line food stances I take, I can pretty easily give up my principles when I am starving.

My brother and I had planned to go for barbecue one day, although when he picked me up he announced he had an errand to run first. Knowing my brother, I figured this could take between ten minutes and eight hours, and I was starving. He offered me a Quiznos sammie (I actually just looked on the Quiznos website to determine if the singular of sammies is "sammy" or "sammie," God help me.) The fact that he had gone by Quiznos shortly before we were going to lunch did not surprise me. Remember Jughead's appetite in the Archie comics? That's my brother. And he is as skinny as Jughead.

I hate to say it, but it was fantastic. I cannot figure out which one it was, although it had beef, lettuce, tomatoes, and some spicy sauce in it. Do I plan to get another one soon? No. Was it good because I was famished? Maybe. But it was much, much better than I expected. I still hate the name, though.

The funny thing about the term "sammy" and/or "sammies" is that most underground culinary types believe the term was coined as a tribute of sorts to Sammy Davis Jr's insaitiable appetite for what are commonly referred to as sandwiches... truth be told, it was Wiford Brimley who came up with the phrase... seems that dear old WB had quite the love affair with Johnnie Walker Black and after tossing back this 34th and
35th finger of the evening, he would crave a sandwich or 2. Now most of you are thinking that "sammy" was a slurred attempt to annunciate sandwich, but it wasn't - blessed with a remarkably weird medical oddity, Wilford used to actually speak clearer when boozed up... problem being, the more he drank the cuter he thought his behavior was...even though this was the complete opposite of sober reality. Long story short, one evening after berating his in-home wait staff (in the midst of yet another "cutie-drunk rage") he ordered them to make him a "sammy" mistakenly thinking that the staff would find it humorous and forgive him for being an alcoholic bastard. They did not make said sandwich.
Moral to the story: Just because you hawk oatmeal to seniors, you don't have the right to force your servants to make you a sandwich.

And yet I would still have to say that is only Wilfred's second most important contribution to pop culture; the first being, of course, the seldom-mentioned television show "Our House," where he taught life lessons to his grandkids, including a 15 year-old Shannon Doherty.

My favorite episode was the one where Wilfred made his family live for an entire weekend like it was the 19th century to teach them that progress is not always good. I do not remember if they had slaves in that episode or if any of the kids died of typhoid fever but I'm guessing no.

However I stopped watching the show when they had a two-part episode about an earthquake and then ten days later the Whittier Narrows quake occured, because I thought the show had some kind of power to predict the future and I was not entirely comfortable with that.

Wow. You guys make me feel way less dorky than I did about three minutes ago.