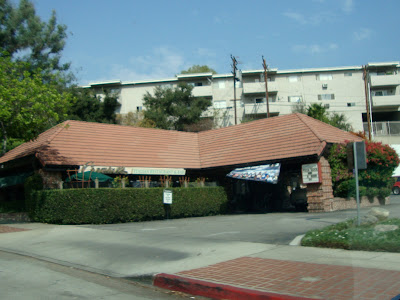 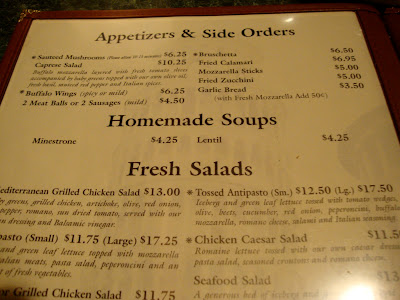 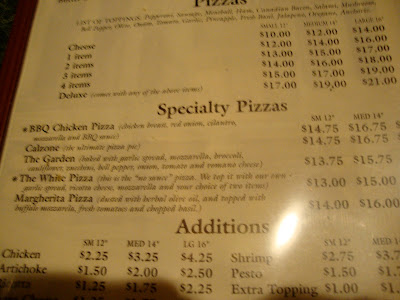 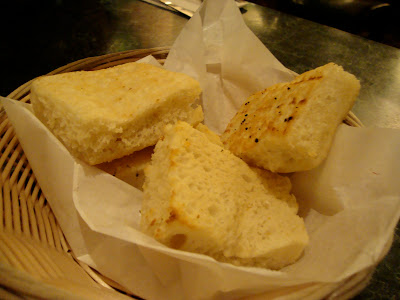 I've lived less that half a mile from Carmine's for more than two years, but I'd never gone in. Years ago I hung out at the bar with my friend Miriam on a couple of occasions, but I don't remember ever eating. Many years before that, when I was a kid, this location was Tommy Lasorda's restaurant, something about ribs and pasta, the name I don't quite remember. What I do remember is them being shut down for health code violations, including rat urine on plates. Some things you never forget. I'm sure that had something to do with me not ever eating there.

The other night my friend Carla and I were looking for a place to eat dinner. Elizabeth was hungry but had had a long day at work and didn't feel like joining us. I suggested we try Carmine's; Carla and I could eat there and bring home some leftover pizza for Elizabeth. Everyone thought that was a good idea.

Considering it was about 8 o'clock on a Friday night, the place was remarkably empty. There were a handful of people in the bar, but only two or three tables occupied in the dining room. We took a table and ordered a couple beers before opening the menu. 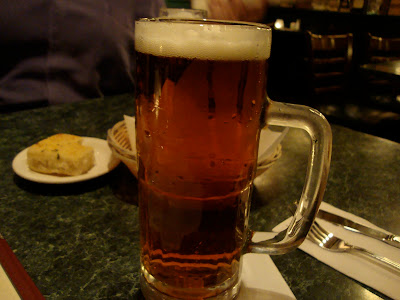 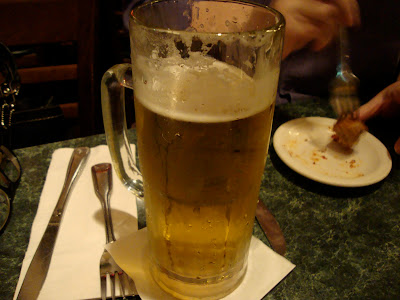 A Fat Tire for me, something lighter for Carla. (I don't remember what she ordered.) 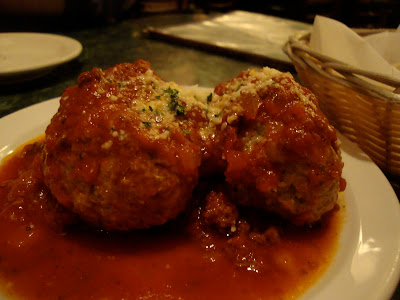 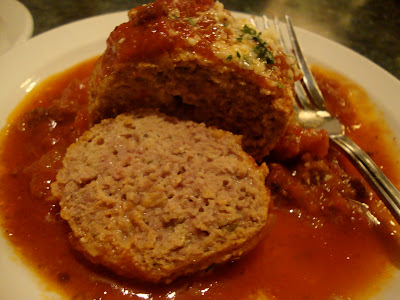 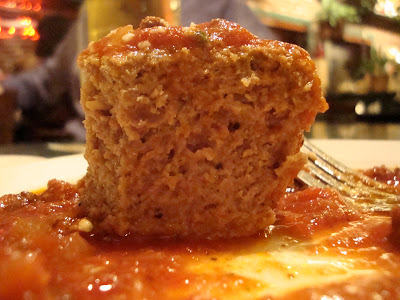 It was a cool evening and I was very hungry, so we started with some meatballs. There were two of them, each the size of a baseball. The balls themselves were good - not great - and I was happy to eat them, but the sauce was outstanding. Slightly sweet, with a savory bite, I was not expecting anything nearly this good. 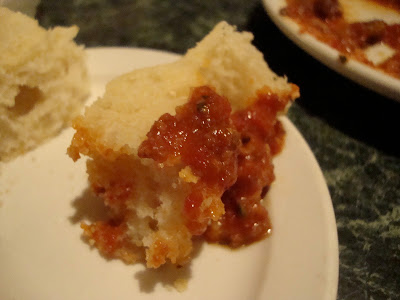 I hadn't thought much of the bread on the table. The place was so empty it would not surprise me if it had been sitting around for quite a while. But there was leftover sauce when we'd finished our meatballs so I used the bread as a vehicle to deliver more sauce into my mouth. 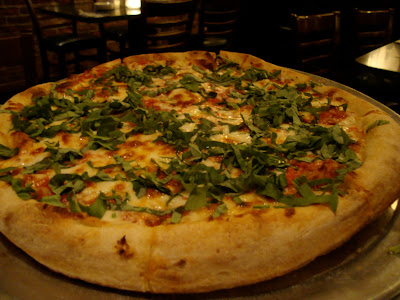 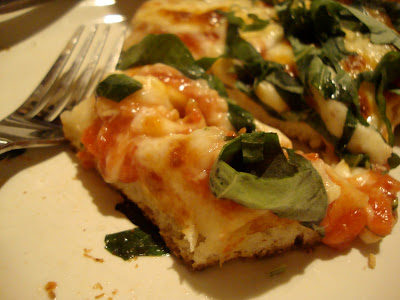 We ordered two medium pizzas. "Why not just get a large?" our waiter asked.

"Well, we are taking some home for someone else," I said,"and we want to make sure we have enough."

When the pizzas came out twenty minutes later we laughed: there was no question there would be enough. These are some generously sized medium pizzas. The first one we got was my standard garlic and basil. It was very good. I'm a much bigger fan of thin crust pizza than thick, but this crust was tasty. It will never replace Mamma's as my favorite pizza in the area, but it's better than most. 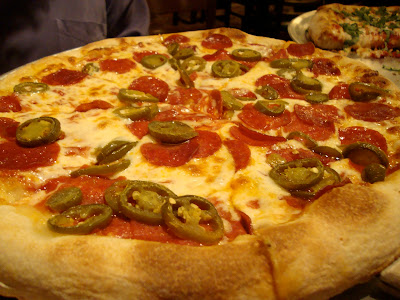 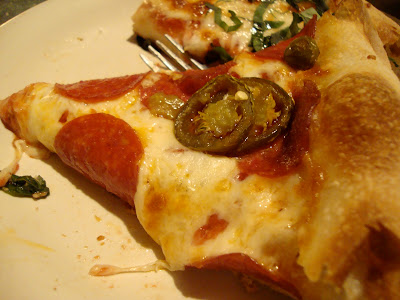 Our second pizza was pepperoni and jalapeno. We had wanted to get a pepperoni and green onion pizza as an homage to the Mt. Etna, the single greatest pizza that ever existed in Pasadena at the now-gone La Fornaretta. But they didn't have any green onions on the menu at Carmine's, so we got jalapeno instead. And these jalapenos were quite spicy. This was a good pizza, but I liked the first one better. 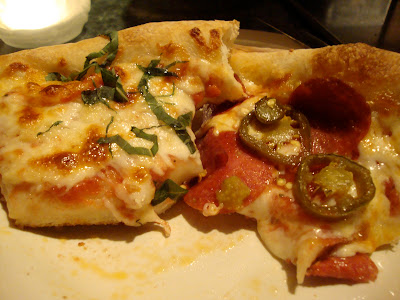 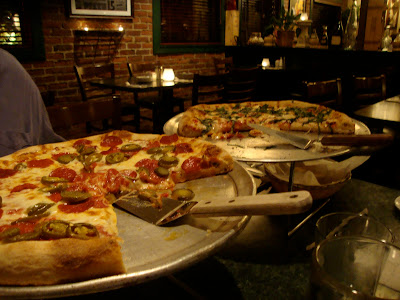 This is what we had left by the time we were full: more than a whole pizza. We could have just gotten one medium and been happy. Oh well. I took some home for Elizabeth and she liked it, and I ate the rest of the pizza over the weekend. It was very good reheated in the oven; the crust crisped up and the toppings tasted fresh for at least 48 hours.

I would be glad to go back to Carmine's if I am ever with someone who wants to, but I doubt I'll ever return by myself. It was good, but I like Mamma's, which is two blocks away, much more.
Posted by JustinM at 10:13 AM

Before Carmine's it was "Lasorda's". Before Lasorda's it was Heckel's, or was it Jeckel's? At any rate it was named after a crow.
The food here has always been very solid ma'n'pa Italian; never great but always good and satisfying.
Carmine is the name of the owner's son (who is a majority partner at Magnolia on Lake Ave).
The old man died about a year ago. He was an interesting character who made his fortune not in the restaurant business but at the horse tracks. Once I received a payment for a large liquor order in the form of a briefcase full of cash.
The bar should be avoided though - rough crowd. They serve beer in a giant mug that they call a "boomer", one of which usually ends up being smashed over a some patron's head on an average of once per week.

Wow, Nosh, that was like something out of a James Ellroy novel. If they used your comment as an advertisement, I bet it would be a lot more crowded.

Uh, you mean the restaurant or the emergency ward?
If they see my comment I'll surely be among the victims.

Mama mia! You're making me want meatballs which I don't ever hardly eat.

I think it was called a “Boombah.” At least that’s what I remember it being called at some other place back when I had my fake ID. Maybe McMurphy’s? Anyway, Carmine’s doesn’t seem to have the full Boomer/Boombah anymore. They’ve just got the mini-boomie (only like 24 ounces instead of 32 and not nearly as deadly as a weapon) – they don’t call it that but maybe they’ll start now. The last time I had a real Boombah at Carmine’s was about 6 or 7 years ago.