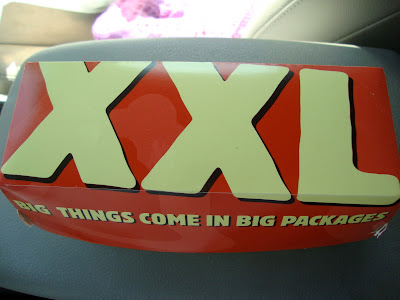 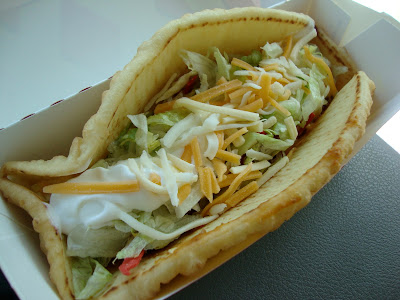 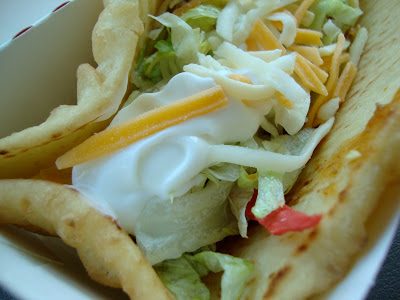 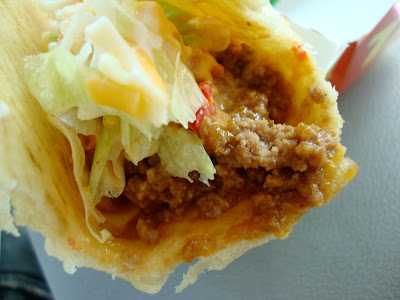 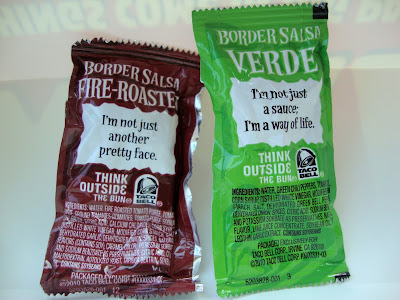 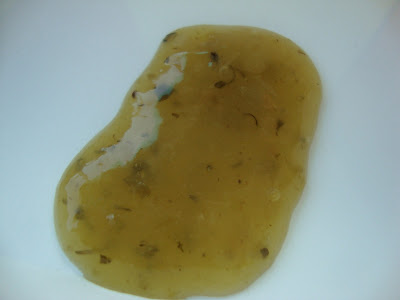 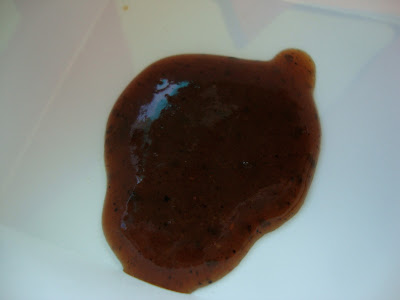 It always feels a little strange going to a Taco Bell in Southern California. Almost every city here has a few taco joints that would be legendary in most places around the country. (I once stayed on the Upper East Side of Manhattan for a week; there was a Domino's Pizza a couple blocks away. Going there would be somewhat analogous, I suppose.)

But sometimes Taco Bell comes out with an item - like, say, the Volcano Taco - that I actually want to try. They're never particularly good, the best I hope for is "not bad," but all things considered, I do not hate Taco Bell like I used to. (I went more than a decade refusing to eat there.)

Other times chance and circumstance just make me wind up at Taco Bell. The other day I was running an errand that took longer than I anticipated and I developed a crushing headache from not having eaten all day. There was a Taco Bell less than one hundred feet from where I was so I figured why not?

I waited in a line of eight people that moved at an unnecessarily slow pace. Did you ever see the Family Guy where Stewie takes the cast of Star Trek: The Next Generation through the McDonald's drive-through and one of them wants a Shamrock Shake (in September), Patrick Stewart wants breakfast (at 3 PM), and another guy wants a McDLT (which was discontinued in 1990)? That's what it felt like.

I ordered the XXL Chalupa without their "fiesta salsa," something I tried once and found disgusting. After a ten-minute wait or so, I received my box. I took it to the car and unwrapped it. Curiously, all the sour cream was on one end of the Chalupa. (The next day I read a review of this same product on The Impulsive Buy,  and the writer had received the exact same thing. Maybe that's how they're supposed to be?)

I took a bite. I'm not sure how to judge this thing. Was it terrible? No. Was it good? No, not at all. The shell was crispy and large, but the beef was the same oily, low-quality beef that Taco Bell uses in all their tacos. There was supposed to be a blend of three cheeses and a nacho cheese sauce but none of that had any taste.

The sour cream was "low fat sour cream." This made me smile. The chalupa has 650 calories - more than half of which are from fat - and 39 grams of fat. I'm trying to imagine the person who said "You know, we should make the sour cream 'low fat' or this thing could get a little unhealthy."

The chalupa could have been a lot worse. That's about the best thing I can say for it. I didn't hate it but considering how unhealthy it is, not to mention I can think of several dozen better places to stop for tacos in Pasadena, it's not something I'll ever get again.

Happily, I tried both of Taco Bell's new sauces: salsa verde and fire roasted. And they were both delicious. The salsa verde tasted like mild green peppers and tomatillos and the fire roasted salsa actually tasted like roasted tomatoes, with a sneaky spice. They are among the best fast food hot sauces I have ever tried, and they are unquestionably the best thing I have ever eaten from Taco Bell.
Posted by JustinM at 10:58 AM

OH. MY. GOSH. Seriously, we can't find anything redeeming about this beast.

Funny thing, that chalupa. A chalupa by definition is similar to a tostada on a thicker, larger corn tortilla - sorta like a sope shell, but not as quite as thick. The one pictured here looks like it's surrounded by pita.

But then again, what do I know? The Lone Ranger's sidekick went by the name "Tonto", which translates to "idiot" in English.

Wait a second... all those years in high school when my Spanish teacher called me "Tonto," he wasn't calling me his loyal right-hand man? This explains a lot.

I'm positive that the pure lard I ate (more than once, it is tasty stuff) during the past two weeks had more redeeming nutritional qualities than this thing. How can they even call it food?

I had a co-worker many years ago who called me "muchacha fea". Much hilarity ensued when, 2 years into that job, I learned what it meant.

My friend Nick sent me a text yesterday about the horrible Joe Girardi/Mariano Rivera XXL Chalupa commercial and said it was more of a disgrace to the game than anything Manny ever did. I replied that I'd actually tried the thing.

He merely replied: "The things you do for your blog."

I'm not sure how qualified I am to answer that. I don't like Taco Bell and my main reason for liking Del Taco is their chicken soft tacos.

The only time I remember trying Del Taco's beef in the last few years is a 39-cent taco I tried a few weeks ago. And there was hardly any beef in it. It was certainly drier than Taco Bell's - in other words not swimming in oil. So I guess I would say I like Taco Bell's ground beef more than Del Taco's, which is like saying I like the Yankees more than the Red Sox: it's a true statement but I don't like either so take it with a grain (or 1300 milligrams) of salt.

I love Taco Bell's sauces. Especially their regular hot sauce. It tastes really great on the homemade chicken tacos I make. So sometimes I go there and get something from the 79c value menu then take about four handfuls of the hot sauce packets. Is that unethical?

I'll have to try the new sauces. Exciting! What do you think they'd be best with?

So are you saying that it wasn't so big that you had to take a time out? I just saw that silly commercial and it stuck in my head....I actually had a few weeks ago one of their higher quality soft tacos. I just felt that they plopped some tasteless chicken on it and put a bunch of cilantro, but I guess comparatively speaking it was good.

My guilty pleasure is always their nachos...those sauces do look super, I might have to check that out tomorrow if the oxtail stew I am trying to make completely tanks.

I work in Mojave and there are about 10 places to eat there and 9.5 of them are fast food so if that isn't motivation to bring your lunch I'm not sure what is!

Oh and I have just discovered BevMo as I am sipping on an organic brew craft beer with hints of cardamom in it...it was better than visiting Disney World for me, well almost!

Diana: Unethical? You're also talking to the wrong guy. In high school my three friends and I had an idea that we would take as much hot sauce as we could from Taco Bell until we could completely fill one of our lockers. The idea that the janitor would eventually open the locker and be buried under a mountain of hot sauce was wonderful. So every time we went to Taco Bell we would fill up our bag with hot sauce.

Unfortunately my friend Jon got caught playing in the children's tunnel in the outdoor play area and we were told not to return.

Anyway, what I did was wrong, I admit. But you taking more sauce than you need because you want to use it on other stuff is fine, I think. It's not like they have a sign that reads "please only take what you will use for your Taco Bell food."

It's like taking an extra couple bags from the produce section at the grocery store because you want to collect your toenail clippings. I mean, we all do it... right?

Angie: I remember going on family vacations to Mammoth every summer that I was a kid and stopping in Mojave. That was like a fast food wonderland. They had one of everything. I think I've only been through there twice in my adult life, though