Red Baron "Pizza By The Slice" 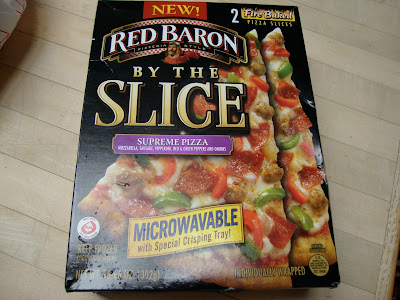 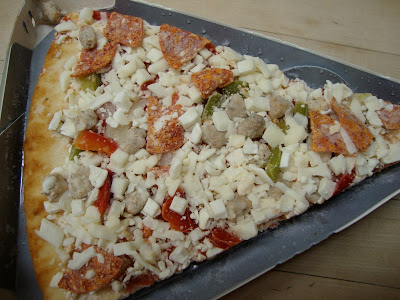 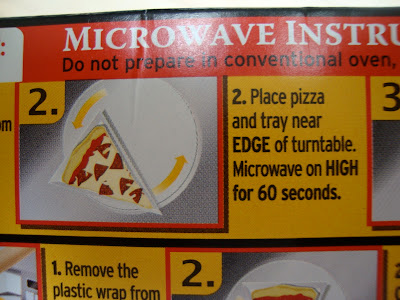 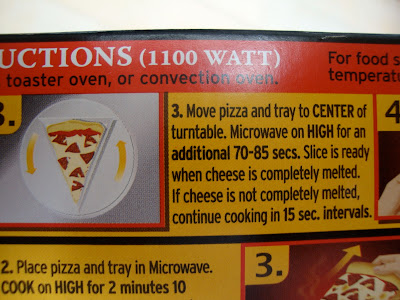 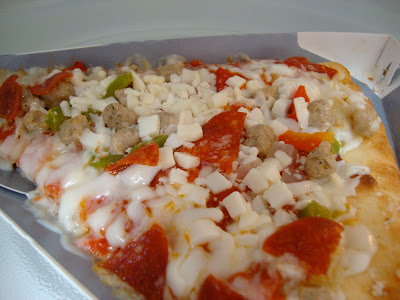 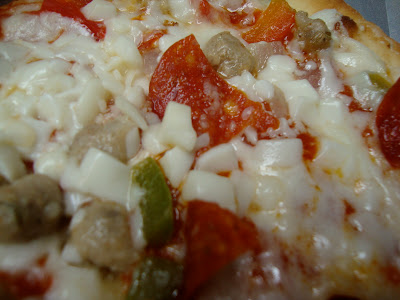 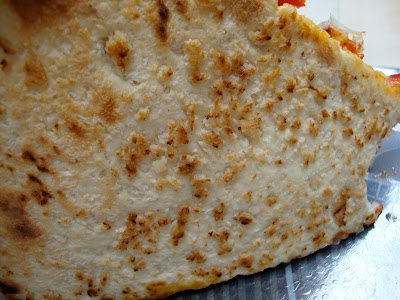 I was at Albertsons and these Red Baron pizzas were on sale for two bucks. I am sure at some point in my life I've eaten Red Baron pizza, I just don't remember when. It's very rare these days that I eat frozen pizza; the $1.29 dough at Fresh & Easy makes it cheaper and much tastier to just make my own pizza at home. And I pretty much never use the microwave.

But the concept of cooking pizza by the slice in the microwave intrigued me. I mean, it's pizza. How bad could it be? (Spoiler alert: really f**king bad.)

I unwrapped the plastic off a slice and read the directions. They seemed comically complex. You're supposed to cook it on the edge of the turntable for a bit, then move it to the center for some more cooking, then cook it in 15-second increments until it's done.

So I did that, and there was only one problem: the cheese at the edge of the slice was melting and turning into an oily mess while the cheese in the center of the slice was still frozen. I could not decide which I hate more - disintegrated cheese or frozen cheese - so, when I thought I'd found a good medium, I took it out, let it wait a minute (another of the Baron's demands) and took a bite.

I've eaten thousands of pizzas in my life, but here it is: the worst pizza I have ever had. The first week Elizabeth moved to California (from Brooklyn) we went to the L.A. Farmer's Market and I bought a slice of pizza that was a hideous-looking mess of oily cheese. She was astonished that people in L.A. would actually pay for something like that, and indeed it was at that point the worst pizza I had ever had.

But this was worse. The cheese was cold in the middle of the slice and scalding at the edges. But I would have forgiven that if it had been tasty. There was no flavor at all. Not the cheese, not the toppings, not even the crust. I've heard hundreds of people over the years claim that a crust "tasted like cardboard." But, although there are many pizzas I don't like, I have never experienced that. Until now. This crust tasted like an edible cardboard.

I would not call myself a pizza snob. There are quite a few people I know who refuse to eat any frozen pizza. There are lots of frozen pizzas that I love. But Red Baron's pizza by the slice is not one of them. It was only the second slice of my life that I refused to finish.

I just tried Pizza Romana frozen pizza for the first time and I thought it was great, but I've only had it once.

Trader Joe's frozen pizzas are all excellent and inexpensive.

I like Tombstone although I always seem to overcook them.

CPK's are average - the best one they had was the Jamaican Jerk Chicken, but I don't think they make it anymore. I do like the BBQ chicken, but unless the pizzas are on sale, they are about 7 bucks, which is an absurd amount to charge for frozen pizza.

I think I might be a pizza snob...at least that is what my co-workers say. I had a freschetta thin crust pizza with spinach and roasted garlic earlier this week that I really enjoyed. I also had a Kashi frozen pizza I think it was before that I really really enjoyed but could not find it again but probably was for the best because I made the mistake of looking at the nutritional info.

Our sincerest apologies for the disappointment you experienced with our By The Slice Pizzas. Thank you for sharing your product insights, as as all feedback whether positive or negative helps us to make future product improvements. We'd encourage you to share this experience in an email to our customer service department at CPSCallbacks@schwans.com.
Sincerely,
The Red Baron Team

matbe you should hae cooked it right and waited for it to get done? who would eat a slice of half done pizza?