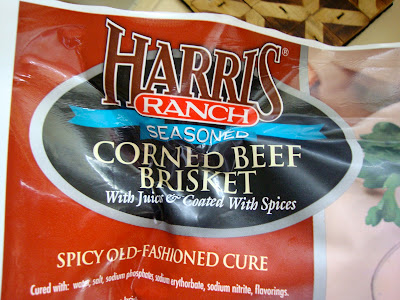 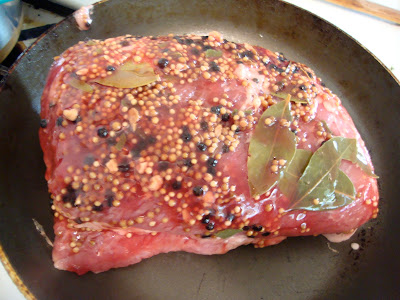 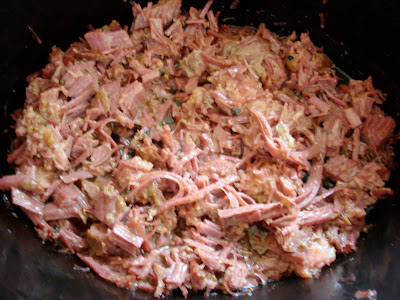 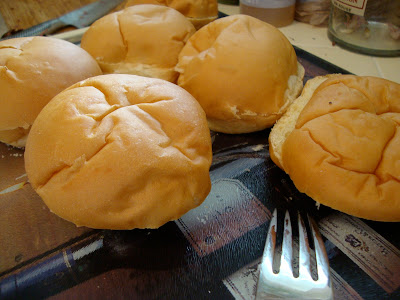 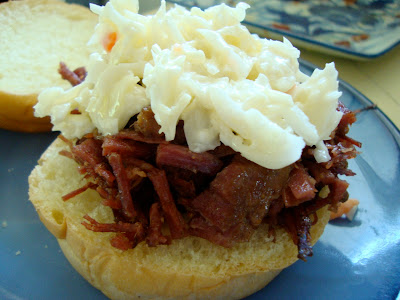 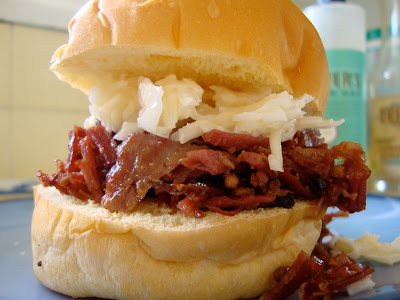 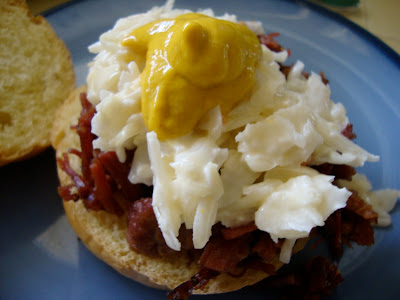 Still addicted to pastrami and corned beef, and wanting to forget about the taste of that Arby's Reuben and Schreiner's pastrami, I decided to make my own corned beef sandwiches. I picked up a Harris Ranch corned beef brisket. It advertised itself as a "spicy old-fashioned cure"... containing sodium erythorbate and sodium phosphates. Just like my great-grandmother used to make.

We have a pretty nice slow cooker. (When my mom retired from teaching a year and a half ago, she got lots of presents, some of which she didn't want; she let me return them and use the credit at Macy's. I got a slow cooker and a dress for Elizabeth. A couple weeks ago I had the slow cooker over at my parents' house to make something. My mom said "That's a nice slow cooker. Where did you get it?" I said "It was one of your retirement presents.")

I seared the corned beef in a pan over high heat for a minute or so on each side, then placed it in the slow cooker in the morning with some sliced onions underneath, adding some beer. Hours later I returned home. The smell coming from the kitchen was fantastic. I lifted the lid of the slow cooker, stepped back to avoid being scalded, and let it wash over me.

I took the brisket out and cut off the layer of fat - although I could have just lifted it off with my fingers, it was that tender. I drained the liquid from the slow cooker, shredded the beef and returned it with a small amount of mustard sauce.

I got some small rolls at Bristol Farms - their dinner rolls are light and delicate and perfect for staying out of the way of big flavors. I put some beef on each roll and topped it with a large spoonful of a vinegary cole slaw.

They were fantastic. The corned beef melted on the tongue and the acidic bite of the slaw was a nice contrast. The first slider was a little on the sweet side for my tastes, though - especially with the buttery roll - so for my second one I added some McDonald's Hot Mustard sauce. It was even better this way. I could have eaten ten of these, but I stopped myself at nine. Just kidding, three. (But the next day I had two more for breakfast.)
Posted by JustinM at 9:54 AM

breakfast of champions. love it.

PP- how much did the brisket cost? just curious.

there are sheep in the room