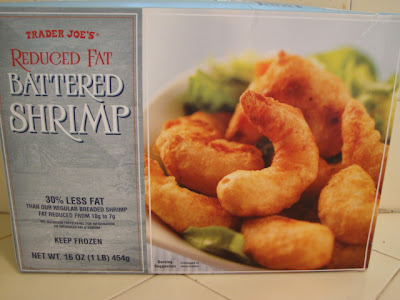 I was somewhat surprised to learn that last night's ALDS Game 5 was the first Division Series to go the maximum five games in half a decade. I had a vested interested in that matchup five years ago: it was between good (the Angels) and evil (the Yankees). Good prevailed.

This year's game 5 was between two teams that I neither like nor dislike: the Rangers, a team that somehow was able to increase payroll during the season while bankrupt and the Rays, a likable bunch of young players who will undoubtedly all be playing for the Red Sox and Yankees in three years.

Here's how big a game it was: Tampa Bay even sold out all their tickets.

So, combining that with a new episode of Huell Howser (for me) and Glee (for Elizabeth), it was a good night to make something simple at home.

On my most recent trip to Trader Joe's I spotted a new item: Reduced Fat Battered Shrimp. As I have written before, there are only a couple things I like more than popcorn shrimp - Belgian fries and lobster. So I had to try them. 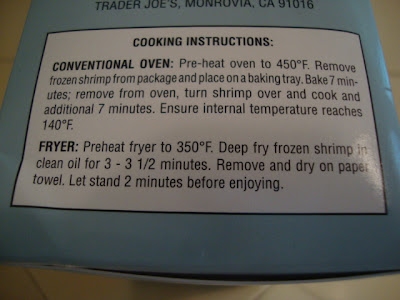 You have to love an item that bills itself as "reduced fat" and then gives you instructions how to fry it. Obviously that's how I had to prepare them. Maybe not the most appetizing thing when frozen, but whatever. You ever seen what Chicken McNuggets look like before being cooked? 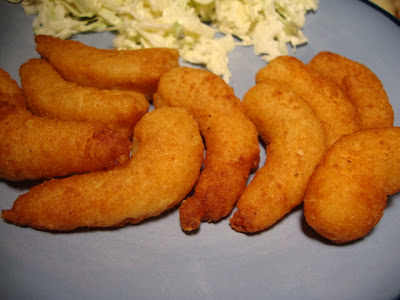 After three minutes or so of pan frying, the shrimp came out a nice, dark golden brown. They were quite good. Not the best I've ever had and the batter was a touch thicker than I would like, but we both liked them. The box was $6.99 and we couldn't finish it. (Next time I will only cook about two thirds of the shrimp, that seems like a good amount for two people.) 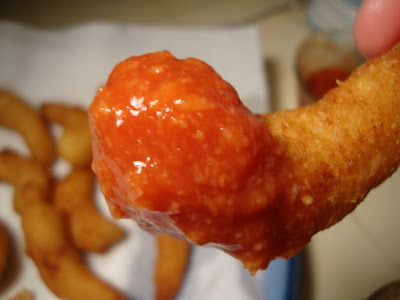 I mixed up a cocktail sauce of ketchup, lemon juice and "Atomic" horseradish. It was very spicy, which is how I like cocktail sauce. 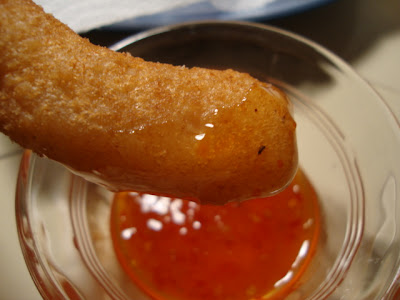 I also used some sweet chili sauce. Elizabeth really liked this but I did not. As often happens with sweet chili sauce, it was only sweet with no noticeable spice.  It was like dipping the shrimp in honey.
I already have some ideas about what to do next time I make these shrimp.
Posted by JustinM at 10:56 AM