Jack in the Box Egg Rolls: A Love Story in Three Parts 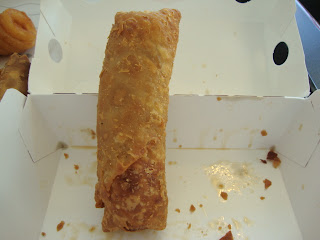 When I was young, and UCLA football was great and the Yankees were bad, and Old Town was cool, when there were wolves in Wales and the only food in the world that I would possibly call better than fast food was cheap Chinese food, Jack in the Box served Toasted Raviolis. It's possible that I have had a better product from a fast food restaurant, but I doubt it. Heavily breaded, fried two degrees past necessary, and served with a delicious marinara sauce, I could happily eat toasted raviolis for dinner and nothing else. (But I never did, I always seemed to eat a "Spicy Crispy Chicken Sandwich" with them, which these days is known by the slightly simpler title "Jack's Spicy Chicken.")

Although I'm sure I ate them dozens of times, and I remember specifically my dad taking me by Jack in the Box many times after basketball practice on winter evenings, I can only remember one instance of actually eating them: sitting in a bean bag chair on the floor of my parents' family room, watching Billy McCaffrey play basketball for Vanderbilt in the early 90s. Memory makes no sense to me sometimes.

Then, for reasons I will never understand, Jack got rid of them. Not long after, they started serving egg rolls. What the fuck, I remember thinking at the time. Not only are they getting rid of their best item, they are getting rid of one of the best fast food items ever, and replacing it with... egg rolls? Who the hell goes to a fast food burger joint and orders egg rolls? Not many things are as judgmental as a 15 year-old who as just been denied his favorite fried food, and I swore I would never try those damn egg rolls. 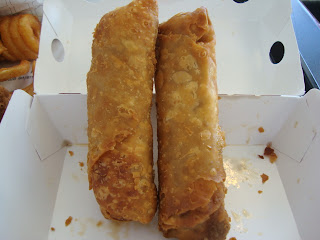 The nice thing about my dramatic pronouncements is that it has always been pretty easy to talk me out of them, particularly if I'm drunk and hungry. And so, one night at a party when I was about 20, in the hills above the Rose Bowl, a guy showed up just after going to Jack in the Box, carrying bacon cheddar potato wedges (an item that looks as bad as it sounds) and egg rolls. He asked if I wanted a bite. I said yes but not of the potato wedges. He gave me an egg roll. I spent several minutes debating whether it was worth breaking my promise never to try them. Actually that's not true. I didn't even think of my promise. I ate it immediately.

Wow, it was good. This was one of those culinary moments I will never forget, like my first battered whole onion (Black Angus, Monrovia 1998), chipotle chicken pizza (Rock Bottom Brewery, San Jose 2001) or shrimp po' boy (Mike Anderson's, New Orleans 2000). This was everything I want in an egg roll: fried crisp, dense, and full of tasty yet indistinguishable flavors. Within five minutes I'd found a sober driver to take me to Jack in the Box so I could buy more of those egg rolls.

I was addicted for months. I would sometimes get egg rolls twice a day. One summer day when the temperature gauge in my car hit 126, coming back from fishing at Lake Perris, I ate nine of them for lunch. (Years later I was talking on the phone to my brother's business partner - who had called me just as he was pulling into the JitB drive-through, which might sound like a bizarre thing to do unless you know him - and I heard him order six egg rolls. I mentioned that how I used to love the egg rolls and he told me that he once ate twenty in a row. Ordinarily I would call B.S. if someone told me that, but I believe him.)

Eventually, though, I had to slow down. I wasn't a teenager anymore and I wasn't playing basketball every day; I couldn't burn the calories like I used to. I cut fast food out of my life for a year. I missed the egg rolls, but this was part of being an adult I told myself. It's not you, egg rolls, it's me. We'll always have Perris. 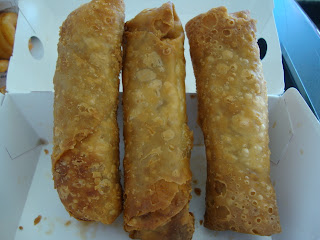 By the time Elizabeth moved to California I had not had Jack's egg rolls in years. I no longer kept up my self-imposed ban of fast food, and every once in a while I still ate at Jack, but it was not very often. We went months without ever going to Jack in the Box. An East-Coaster, Elizabeth had fallen in love with In-N-Out on a visit years earlier and our fast food excursions were usually there.

Finally, more than half a year after she'd moved here, we went to Jack in the Box. What a disaster. We were down in San Diego County with our friends Zach and Tyler, and, as we somehow have started as a tradition with them, we drove around to try new fast food products. At Jack in the Box we tried the pita sandwiches in steak, chicken, and fish. There is no other way to say it: they were horrible. Quite possibly the worst thing from a fast food restaurant that I have ever tried. Earlier in the day Tyler had found something on the tray at Arby's that looked for all the world like a fried clump of hair. He merely shrugged and ate it. (By the way, he's a doctor. I'm not kidding.) But even he wouldn't take more than one bite of these pitas.

So Elizabeth got it into her mind that Jack in the Box was a terrible place. (Those pitas were so bad, I do not fault her.) Consequently, whenever I suggested going to Jack - almost always when a new promotion appeared - she said she didn't want to. Finally, last January, a couple days into the new year, we went for a walk around the Rose Bowl. It was one of those golden winter afternoons when the temperature hits 75 degrees and you can't help but feel lucky to live here. After the walk we needed a snack so I headed up the hill to the Jack in the Box just over the 210 freeway.

I got an order of three egg rolls, assuring Elizabeth that they would be good. And they were and she agreed. We dunked them in Jack's (much-too-sweet) sweet & sour sauce and their honey mustard, which actually might be my favorite fast food honey mustard. "I never would have expected it," Elizabeth said, "but these are good."

So now we go there from time to time when the craving for a snack hits us. If we spit an order of three that's only a couple hundred calories each (in the world of fast food, getting a snack for only 200 calories is basically health food).

On Saturday night we driving around, visiting about a dozen different stores so Elizabeth could try to find a specific shade of nail polish. (My Saturday nights aren't quite the bacchanalia they once were.) We had pretty much run out of places to look. Our last stop was a particularly shady drug store.

"I don't think we're making it out of here with the nail polish," Elizabeth said.

But we did and I suggested we call off the search and get a snack. We stopped in to Jack in the Box and I ordered three egg rolls. We split them. They were delicious.
Posted by JustinM at 10:19 AM

Just yesterday, I was over in Pasadena and starving. I pulled into the Jack-in-the-Box only to find no parking. I cursed the blue collar workers filling the parking lot and left. 40 minutes later after swinging around in the air from a telephone pole, I returned to find a single parking spot. My order - 3 egg rolls and an iced coffee.

Someone probably pulled into the lot just after you and cursed you!

You know, I never thought about this before, but all the JitB's in the area - the one on Rosemead, the one on Colorado, and the one up on Lake in Altadena - have absolutely terrible parking lots.

This is a beautiful story. It made me cry...really it did. Love makes people so crazy things.


Now I have to go get those egg rolls too!

Who might imagine that a story of fast food and love could be poignant? This was and is. My hats are doffed to you; both of you.

I live literally half a block from a Jack in the box.

I eat there way way way too much.. :P

As a matter of fact I think I'm going to go get some right now.

Was that JITB in Pasadena the one by the DMV? Worst customer service ever! I went in there after spending over 4 hours at the DMV because I was starving and dehydrated. I felt like I was on another planet.

I have been to that particular JitB more than any other in the world, but these days I live in South Pas, so I usually go to the one in Highland Park, which is the closest to me, or sometimes the one at the top of Lake Ave.

Haha just had some of those eggrolls I like em with out the sauce. And a Hi-C fruit punch goes great with them.

My friend and I are Asian and she was recently bemoaning the fact that her parents are known to make night time snack runs to Jack just to get their egg rolls. Ugh - what the hell? We're Asian and they should know better! Disgusting, I thought - a discredit to our race. This has been gnawing at me for weeks so yesterday I took the plunge - made a special trip to see for myself. Hot damn, they were pretty good. Not the best, but a HELL of a lot better than what you get with the lunch special plate at every Chinese joint. So you heard it right from the horse's mouth folks - this Asian gal has given her seal of approval!

I am Chinese and I KNOW egg rolls. I was raised with them, taught how to make them, and huge family events would gather around making egg rolls. Well that and blackjack. Now, JitB has possibly the best egg rolls I've ever had in the world (literally, I've had egg rolls everywhere imaginable) and I find myself almost everyday going to Jack in the Box and ordering 9 egg rolls minimum. Ok not everyday, but pretty much! They are PERFECT. I fully endorse them. And also the mini churros...one night I ate 20 of them in a row and it was just BLISS. I tell myself I'm an athlete so it's ok.

And omg last night I had a dream where I ate a JitB Grande breakfast burrito...I went this morning and got one for the first time. SO GOOD.