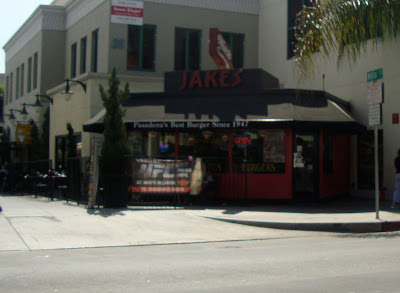 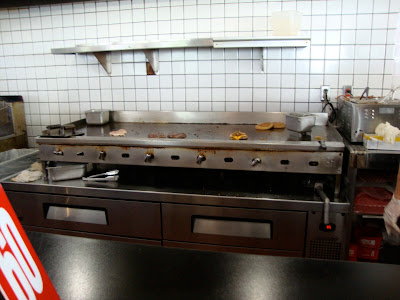 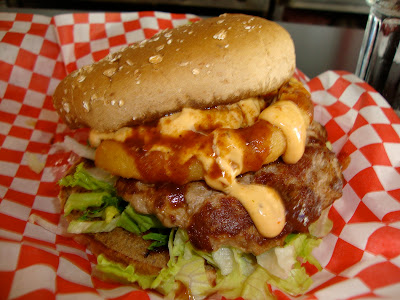 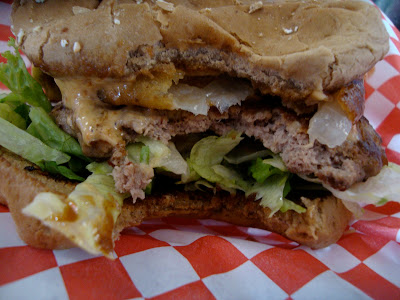 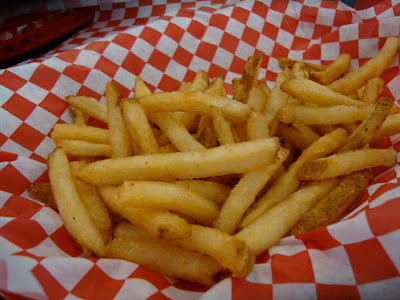 Like Connal's, I have no idea what the actual name of this place is. Their website reads "Jake's Burgers & Billiards." Their Yelp page? "Jake's Diner and Billiards." So I went to the California ABC query system to see what they're Doing Business As. The answer?  Jillians. I am aware that they are owned by Jillian's, but I have literally never once heard anyone refer to them that way. So I will call them by the only thing that anyone I know has ever called it: Jake's. (Except for my friend Geordie Mick, who always insisted on calling "Jakie's." I can't explain it. Geordies are crazy.)

I first ate at Jake's at the end of my junior year of high school. It was lunchtime on a Friday and Die Hard With a Vengeance was opening that night. A couple friends and I had a long lunch break and drove over to Old Town to buy tickets for our whole group of friends. We stopped for lunch at Jake's, sat at the counter, and ate burgers.

As years went by I visited Jake's for various reasons: to listen to too-loud music downstairs when some of my female friends wanted to; to shoot pool on lazy weekend afternoons; to watch football on Sunday mornings for a few years in the middle of this decade. On some of these trips I would eat, but it was never a dining destination. I always thought of the food as rather boring, except perhaps the sliders, which Jake's has served since long before the slider craze of the last couple years hit.

My friend Dave and I wanted to get together for lunch. He mentioned that he was craving a Jake's burger. I said that would be fine with me. The interior of Jake's has not changed in as long as I can remember, and that is certainly a good thing. We took seats at the counter and ordered our food within one minute. This was just after noon and the place was busy. After about ten minutes we saw the cook throw our meat onto the grill.

One of life's great pleasures is hearing meat sizzle on the grill of an open diner kitchen. This is no doubt enhanced on a hot day, the place humming with the noise of people on their lunch break, the jukebox turned up several dials more than necessary, and the smell of the meat rising up six feet in front of you.

"I know these aren't the best burgers around," Dave said to me, "but I love the whole ritual."

The ritual at Jake's is this: you take an order pad: check off everything you want, write your name on top and hand it to the server. Imagine a much less expensive, less sterile version of The Counter. On this day I went for the turkey burger - with the decline in quality at Wolfe Burgers over the last few years, Jake's has my favorite turkey burger in town - with onion rings, lettuce, pickles, A.1. sauce, and chipotle aioli.

I was not going to get any fries but Dave ordered some with his burger (only a $1.49 surcharge) so I knew I would probably have a few, although I've never been a big fan of Jake's fries. Their onion rings, on the other hand, are quite good: thickly battered and fried up perfectly golden. (To be honest, I'd never tried them on a burger before but that sounded good on this day.)

We got our burgers just a few minutes after they were slapped on the grill. I did not hesitate to take a bite. It was really good and the recognition was strong: although there was a time when I ate at Jake's frequently, it had probably been more than two years since I'd eaten there. As often happens in these cases, I wondered with that first bite still in my mouth why I'd let so much time lapse between visits.

I finished my burger in such a short time that I even surprised myself. I considered ordering another but I knew that was a bad idea: by the time I received it I would no longer be hungry for more than one or two bites. I took one of Dave's fries. It was much better than I remembered - seasoned and fried golden. (For years, Jake's fries were consistently the most undercooked in Old Town.) So I took another. I ended up eating more than a dozen of them.

Lunch for the two of us together was just a few cents over twenty bucks. I am going to try to eat at Jake's more than once every couple years from now on. Many of the places from my youth are gone in Old Town. It's nice to see a familiar place like Jake's doing well.
Posted by JustinM at 10:48 AM

I actually really enjoyed Jakes when I tried it (only once), but the price is what prevented me from going back. The burger and fries were great, but I ordered a milkshake as well, and the total bill was around $15. Seemed a little steep - but I guess that in Pasadena you pay for nostalgic little hole in the wall places (I remember thinking that Pie n Burger was pretty pricey for what it was as well).

I don't even think you have to go a few towns east - Connal's, The White Hut, Fair Oaks Burger, etc. are all less expensive. No doubt.

But if I have to pay a few extra dollars so that Jake's doesn't become a frozen yogurt shop or a coffe chain, I'm okay with that. Obviously I don't love the place (since I hadn't been there in more than two years) but I do love looking at it.

Yeah, it's confusing. The sign reads "Jake's" - even the pool hall downstairs; but it is officially Jillian's.
My company has it set up under the following DBA: Jillian's Billiards (JBC of Pasadena), with another store in Universal City (JBC of Hollywood.)
The Pasadena location opened in August 1993, Universal in March, 2000.
I've never eaten at either one - it's about time I tried them.

The Jillian's at Universal is like a Dave & Buster's, as is the only other one I'd ever been to, in Memphis during Memphis in May. (It is now closed.) The one in Pasadena is just a pool hall downstairs and diner upstairs. It's not as good as Fatburger, though, so don't get your hopes up.

how are you!This was a really splendid post!
I come from roma, I was luck to approach your theme in google
Also I obtain a lot in your blog really thanks very much i will come later