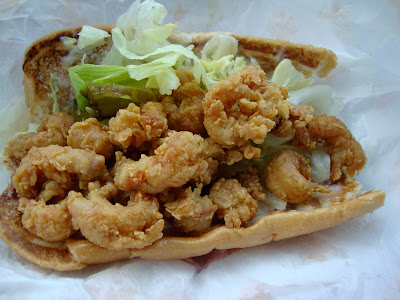 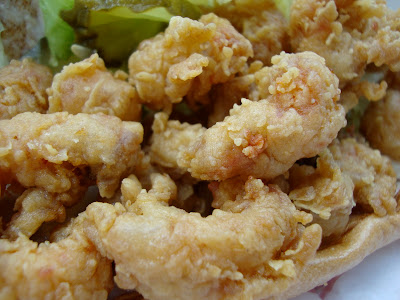 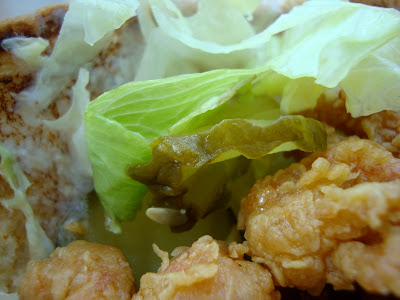 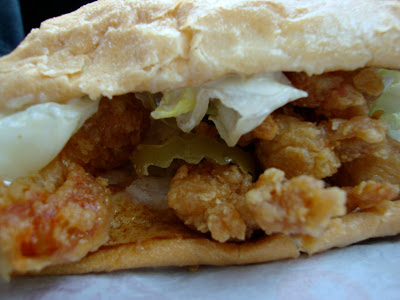 Like the etymology of San Diego, no one really knows where the name "Po' Boy" sandwich comes from. Scholars maintain that the translation was lost hundreds of years ago. The most popular story is that the term originated from the free sandwiches given out to striking New Orleans streetcar workers ("poor boys") in the 1920s.

But everyone seems to agree that the sandwich originated in New Orleans. And indeed that is where I had my first one: Mardi Gras 2000. I was 21 years old and a good friend of mine had booked a room on the corner of Bourbon and Toulouse more than a year in advance. The first morning we were there I headed down to Mike Anderson's Seafood with my friend, her boyfriend and her roommate. I had a fried shrimp po' boy on perfectly crusty bread. Any list of the top 5 sandwiches of my life would have to include that one.

Four years later I was in New Orleans again for Jazz Fest. My friends and I hit the town hard the night we arrived, as one does in the Crescent City. My friend Hatcher and I knew the city well, the other three people we were with did not, and we made it a point to introduce them to all the drinks New Orleans has to offer. The next morning I woke up early. Any list of the top 5 hangovers of my life would have to include that one. I knew the perfect cure. I waited for Mike Anderson's to open and was the first customer. I sat at the bar and ordered a shrimp po' boy. And a Turbodog. Oh to be 25 again.

A couple months ago I got a voicemail on my phone from my best friend from high school, David. I have not seen him in four years, since he joined the Coast Guard. He was in New Orleans and had just eaten a po' boy and it reminded him of me (there are far worse reasons for someone to think of you) since I first introduced him to the po' boy at Bubba Gump in Monterey in late 2000, a few months after my Mardi Gras trip.

Now it's 2010, a decade after my initial encounter with the po' boy, and Popeyes has introduced their "2nd Annual Crawfish Festival." I wrote about their crawfish last year and my futile attempts to eat some before finally finding a Popeyes that carried them. They were fantastic, probably the best thing I have ever eaten from Popeyes, and I've eaten a lot. (On that Jazz Fest trip, while waiting for Chris Smither to start performing in the Popeyes Blues Tent, I listened to a large man describe why each item at Popeyes is better than its comparable item at KFC, a lesson I neither disagreed with nor asked for.)

This year, Popeyes is not only offering the "crawfish tackle box," but three more items: a crawfish po' boy, crawfish etoufee, and crawfish "traveler" - basically a small order of crawfish for those who don't want to eat too many, although I cannot imagine who that would be. (For what it's worth, they will be giving out free samples of crawfish on November 3rd.) It's been far too long since I've had a po' boy and I decided I needed one.

Once again it would be difficult to procure the sandwich. I first tried the Popeyes up on Lake. I walked in and there were at least a dozen people in line, moving at a painfully slow pace. After a few minutes of waiting I left, determined to come back. I did a couple hours later, and this time there was nobody in line. However, although they had the crawfish tackle box on the menu, they did not have anything else.

"Are you doing the crawfish po' boy?" I asked the girl behind the counter.

"The what?" she shrieked back at me. I was pretty sure at this point I could guess the answer.

That night Elizabeth and I headed down to the Popeyes in Alhambra. But there was no place to park. Two cars had literally parked behind other cars in the parking lot. I had no desire to do that. And there were lots of people waiting in line inside. We left and got burgers.

The next day (yesterday), I returned to that Popeyes for my fourth attempt at the po' boy. This time there were only a couple people in line, the sandwich was on the menu, and I was able to order within a few minutes. Ten minutes later I got my sandwich and took it out to the car. I unwrapped the thing and stared at it for a minute: it was beautiful.

I am often amazed at the quality of some of the items Popeyes comes out with. No, they're not fine dining, but they are as good as most restaurants, and a lot cheaper. This sandwich was a little over four bucks and it was fantastic. The fried crawfish were crispy on the outside and tender and buttery inside. The bread was very nice - the perfect balance of slightly-crusty exterior and soft interior.

The one thing I didn't like about the sandwich was the sauce. I'd read that it is supposed to be Popeyes "creamy horseradish sauce," which I like, but this tasted more like a sweet buttermilk sauce. Luckily I always carry some hot sauce in my car. (I don't know if that makes me smart or pathetic.) A few shakes of the hot sauce and the sandwich was much better.

I would gladly eat this sandwich again anytime, although I think on my next trip to Popeyes - in other words, this weekend - I will be getting the tackle box and eating the crawfish with different sauces.
Posted by JustinM at 9:10 AM

I was hoping you'd write about these. It looks soooo good.

That looks pretty tasty, and I do love crawfish... maybe I'll have to swing by.

carrying hot sauce makes you smart. and i think i'll have to check this out in nyc! I like popeye's myself!

Awesome... I was just in New Orleans a few months ago and had all sorts of crawfish.

Which Popeye's did you end up finding the po boy at? The one in Alhambra?

The Alhambra location on Atlantic and Valley.

I had the tackle box up here in San Jose and was disappointed. Popeyes has gotten super cheap about the quantity of the crawfish... I think I measured it to be about 2-3oz.

The food tasted fine though...

You know, I had the tackle box for the first time this year about a week ago and had the exact same thought. It was much smaller than the time I tried it a year ago. It cost me about $15 for two tackle box combos, and we were both still hungry afterward.

Came across this blog while I was searching for the reason why Popeyes isn't selling the 'craw' anymore. :( Don't think I've ever been as disappointed before as I was last night at the Popeye's in Pomona. The crawfish is gone. *sob* *sob*

Aw, man, sorry to hear that, Jessica. Not to kick you when you're down... but I think it just ended this past weekend.

They will be back next year, though... although I bet it's possible some of the units still have some crawfish around.