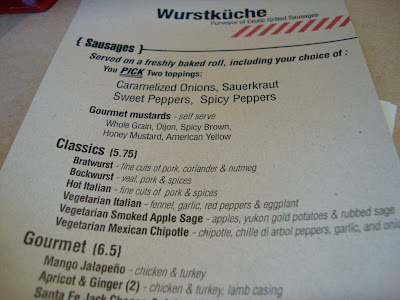 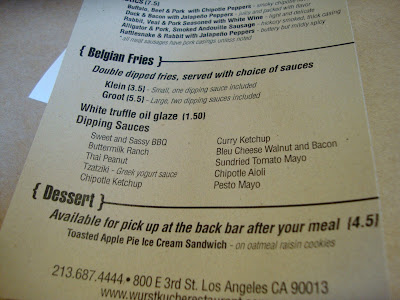 Two months ago, I wrote about eating at Pommes Frites in New York City. My mom saw those pics and asked if there was anywhere around here with good Belgian fries. I replied that she should try the fries at Wurstküche.

I had only been to Wurstküche once, about a year and a half earlier. Although the place was packed with hipsters and it took more than 40 minutes to get our food, and although the price for some fries and sausages was over forty bucks (even without alcohol), I still kind of liked it, in no small part due to the fact that the fries were the best I have ever had.

Over the weekend, Elizabeth and I headed down to Wurstküche with my parents, despite the fact that in that post on Pommes Frites I agreed with the maxim that you can never step in the same river twice. (This is what is known as foreshadowing.) 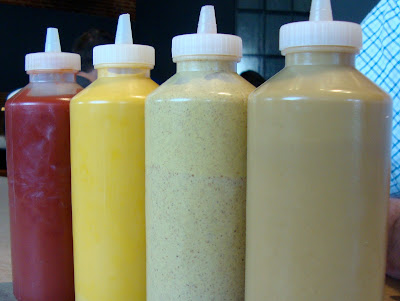 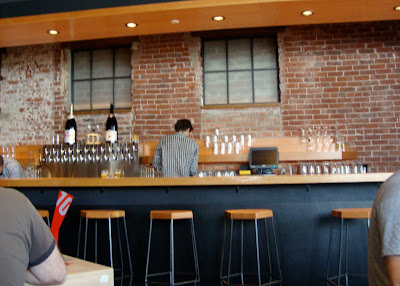 We got down to Wurstküche about noon. Thankfully, the line wasn't too long. On my first visit, which was the Friday of Memorial Day Weekend, there were about 30 people in line ahead of us. This time, there were only a dozen. It still took longer that it should have, though. Despite the fact that a nice girl was handing menus to everyone when they walked in - so everyone had several minutes to study the menu and decide what they wanted - people weren't even looking at the menu until they got to the counter.

They would amble up to the counter and know what beer they wanted to order, but only then would they turn their attention to the menu that they had been holding for the last quarter-hour. "Oh," they would exclaim with surprise, "let's see, do I want a bratwurst or a spicy sausage? Well, last time I ate a spicy sausage I had gas for days. But then again it might complement the beer." These things went on for several minutes. I think the shortest amount of time someone took was three minutes to order two things.

When it was my turn, I was prepared. It was not hard to be; I had spent my time in line studying the menu, which I could see easily since I wasn't wearing my sunglasses indoors... something I had in common with less than half the people in line. I ordered four different sausages with the appropriate toppings, two orders of fries and four dipping sauces in about thirty seconds and moved on. (I'm not saying that makes me better than everyone else ahead of me in line. But I am saying it makes me more considerate.) 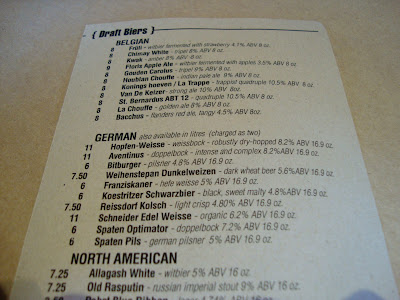 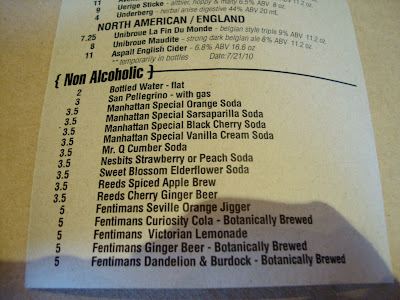 There is a nice collection of Belgian and German beers, but nothing I was interested in. (My friend Mick calls these "princess beers." I wouldn't go that far, but there was nothing on the menu that I thought would complement my food.) 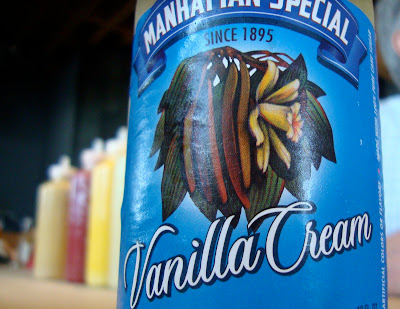 Elizabeth had a Manhattan Special Vanilla Cream Soda. I considered getting a soda, but instead drank the cucumber water they offer. 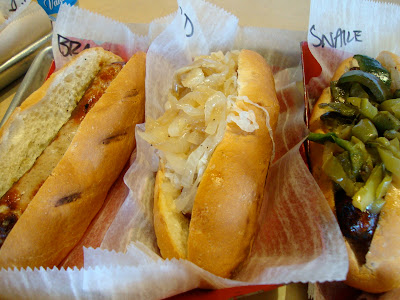 It took about twenty minutes for our food to arrive. The beer hall-vibe of the place makes it hard to talk with your dining companions without yelling. I suppose if you're hanging out drinking beer with a bunch of friends it wouldn't be a big deal. But if you're looking to have a relaxing lunch, this isn't the place. 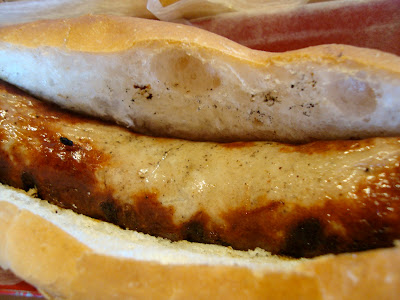 My dad got the bratwurst. As usual, he wanted no toppings nor condiments on the brat. He enjoyed it, although he said it was no comparison to the bratwursts I cook from Taylor's butcher shop. 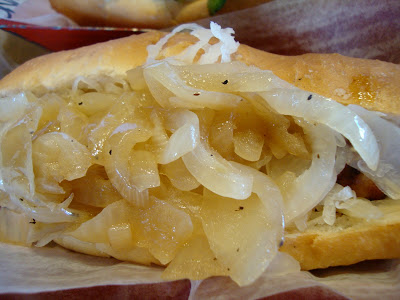 The green chili and cilantro sausage with caramelized onions and sauerkraut. 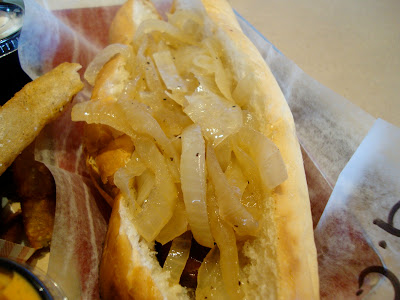 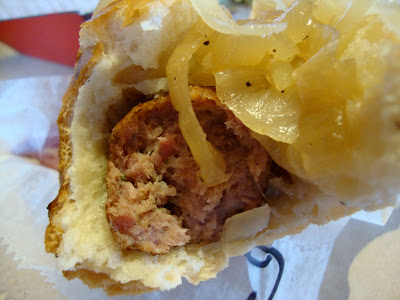 Elizabeth had the "Green Chilies and Cilantro" sausage. On our previous trip she'd had a sausage with jack cheese and jalapeno peppers and declared it the best sausage that she has ever had. She said this sausage was every bit as good, just different. (Kind of like Wild Hogs is every bit as good as Home Alone. Just different.) I took a bite of her sausage; it was very good, much better than mine. The flavor of cilantro and chilies were both strong. 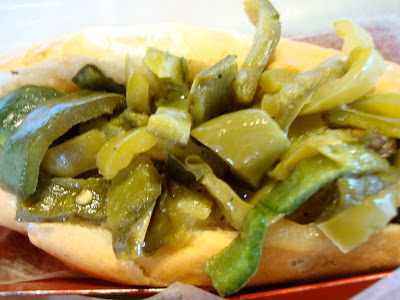 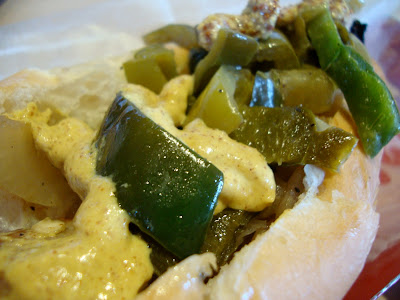 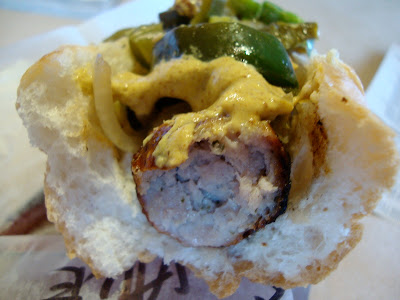 I ordered the rattlesnake and rabbit sausage. On my previous trip I'd eaten the "Austin Blues" - peppers and smoked pork - and it was really good, however I wanted to try something a little more exotic this time. But eating rattlesnake and rabbit is like eating alligator or conch: the novelty of what you're eating far outweighs the flavor of the meat, which is minimal at best. Not bad by any means, but more of a vehicle for other flavors, in this case the hot peppers and mustard. The hot peppers were outstanding and genuinely spicy. But the sausage was very bland and I cannot recommend ordering it. 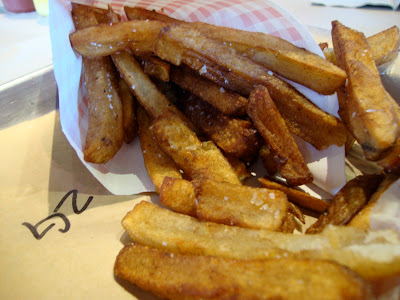 The fries. Damn. What a disappointment. As soon as I saw them, my heart sank a little. On my previous visit, they were presented upright in a metal holder, an elegant presentation. These fries were lying flat on a tray, as if they had been carelessly thrown there. Many of them had slid out of the paper cone and were strewn around.

But taste is everything in these matters, and I excitedly grabbed a couple fries. An even bigger disappointment. Unlike the previous visit and the best fries I have ever had, crispy and hot, these were barely warm and completely floppy. It was almost as if they had neglected to fry them for a second time. I was hoping to introduce my parents to the best fries I had ever eaten, and instead I ended up showing them the third-best fries I had eaten that week.

"What do you think?" I asked my parents, not particularly wanting to hear their answer.

"They would probably be really good if they were hot," my dad said. 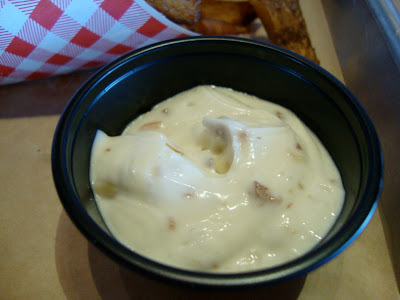 Blue Cheese walnut and bacon. My buddy Tony had told me that on my next trip to Wurstküche I had to try this. I did and he was right, it was delicious. 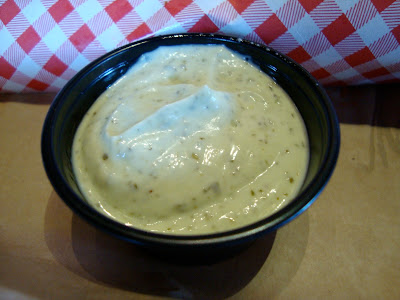 Pesto Mayo. This was the one my dad wanted. I tried it and thought it was good, but nothing I would ever try again. 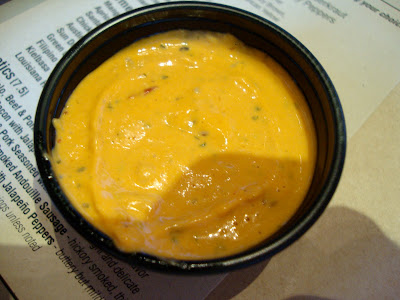 Chipotle aioli. This is my favorite. 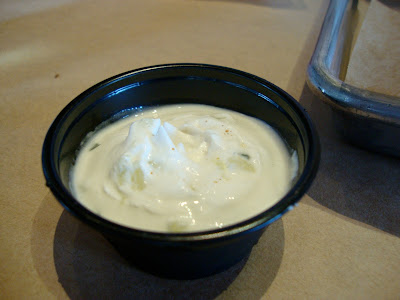 Tzatziki. Elizabeth's favorite.
After the disappointment with the fries, I think that my second trip to Wurstküche will be my last. I'm not saying it's bad place, not at all. But some places are made for guys like me and some are not. A dart board, Van Morrison on the jukebox, and a bartender who knows how to execute the proper two-stage pour to a pint of Guinness? That's heaven. Loud volume and crowds of people wearing sunglasses indoors who don't apologize when they bump into you? Not so much. Throw in the long wait and the inconsistent food and I don't feel any need to return.
Posted by JustinM at 10:29 AM

That's too bad... nothing worse than a restaurant not living up to its reputation. Plus... who needs to put up with inconsiderate clientele.

Irina: I understand why some people love the place, it's just not for me. I think the idea of the place is far better than the execution.

Anon: Many, many times. It's like watching a high speed pursuit. I know it's not adding anything to my life and there are at least a few dozen better things I could be watching, but I can't turn away.

I can't believe you would even compare Wild Hogs to Home Alone. Not cool. I like my sausage yet again, however, the fries were definitely disappointing. Oh well.

What a bummer! I wanted to check out those fries the next time I go home, but it looks like i will be headed to oinkster now for my fried potato goodness!

I miss this place! Love that tzatziki too :)