The KFC Chicken Little: Photos Of An Old Friend (A Friday Afternoon Lagniappe) 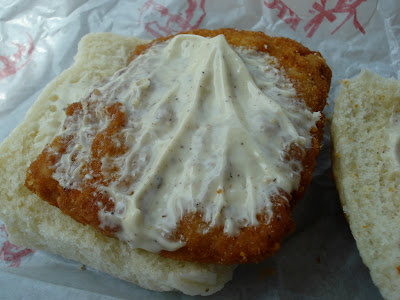 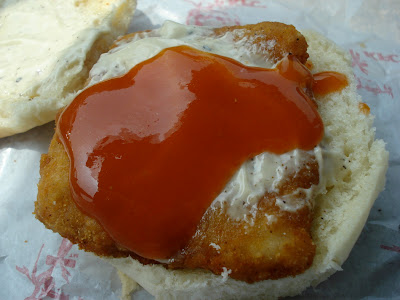 But the fact remains that the most popular post I have written by a considerable margin was one I did a year and a half ago about KFC Chicken Littles. The pictures weren't very good, but I shared a couple memories of the snack and apparently there are quite a few people out there who remember the Chicken Littles fondly.

There is a Facebook page dedicated to bringing back Chicken Littles, and they use one of my pictures.  Sometimes a discussion on Chowhound or some other forum about Chicken Littles will come about, linking to this blog, and dozens of people will check out that old blog post in a given day.

I recently came across some better photos I took of a Chicken Little. It was more than a year ago - I recently went back to the KFC in Arcadia that always had them, and they are now gone for good - but I am putting them up so people can get a better idea of what they looked like. The first one is how the sandwich was served, the second one is how I always ate it, with an entire packet of KFC's hot sauce squirted onto it. This was always much more than necessary and I used to make a mess, but I would give all the money in my wallet right now (we're talking almost six bucks) to have one of those messes on my shirt this afternoon. I miss those little bastards.
Posted by JustinM at 7:00 PM

we still have them at a local mall, in Hamilton On, mind you not that it helps you much, but oddly this KFC has a lot of old menu items no others have anymore.

Maybe it doesn't help me but it's good to know. Someone more creative could make a map of all the places the Chicken Littes still are.

As recently as a couple years ago I knew of two KFCs in Southern California that had lots of the old items (Chicken Littles, Boneless Wings with the "flavor station," etc.) but now they both only have current stuff.

I was watched the new episode of The Good Guys (which is very underrated and, sadly, will probably be canceled this year) and they were trying to find a "tech bandit." In the midst of their investigation, they catch him on surveillance at a BBQ restaurant called Hickory-something. He ordered a brisket sandwich. He took a bite, put it down, took a picture, then wrote stuff on the computer that he brought with him.

They found out he's a food blogger. He only steals technology to fund his traveling/dining. "I only have to work 5 or 6 days a year, and I get to do what I love."

It made me think of your blog. The End.

I'd do that in a heartbeat if I were smart enough. Most of the time I have to get someone to help me turn on the computer. Once it prompted me to "press any key" and I spent four hours searching for the "any" key.