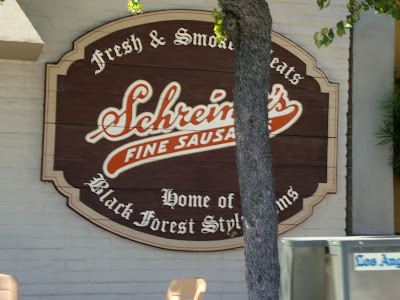 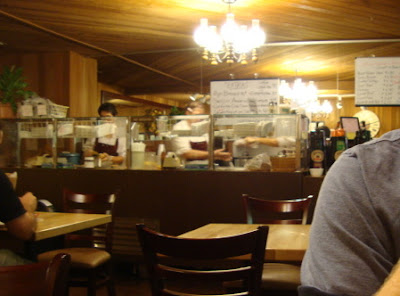 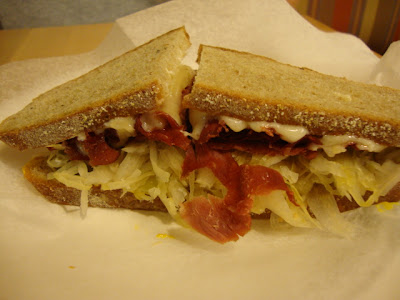 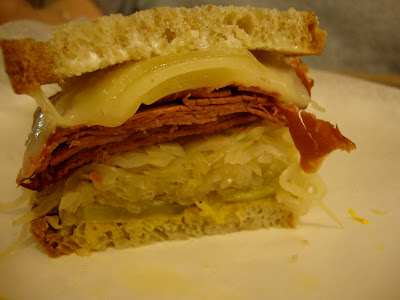 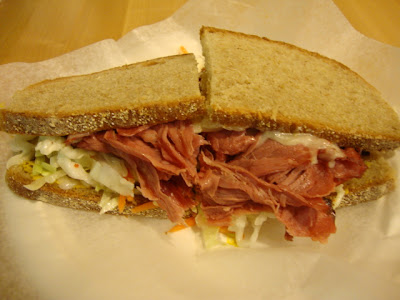 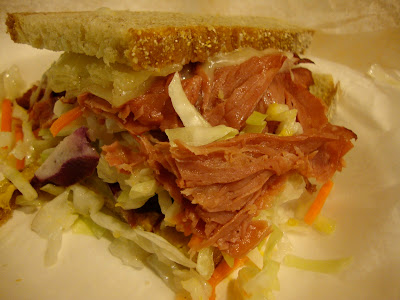 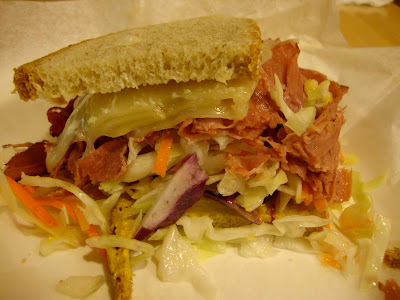 I've been walking through the fallout since eating that Langer's sandwich two weeks ago. I have been craving pastrami and corned beef. If someone offered me a pill that would make everything taste like pastrami for the rest of my life I would take it and probably start trying to eat books off my shelf. I even considered re-trying the Jack in the Box pastrami sandwich that I hated, just so I could have some pastrami. (But I was able to check myself and did not try it.) This needs to stop.

Especially considering that nothing has come close to Langer's. But, I reasoned, I had never been to Langer's before; maybe there are some other jewels out there which I have not tried.

Schreiner's only counts halfway in that department: I have purchased sausages from there many times but never have I stopped to have a sandwich in their deli. When I was there with my mom the other day, picking up supplies for our UCLA football/Oktoberfest lunch, I decided we should have a bite to eat.

My mom wanted a reuben so that's what she ordered and those are the first two sandwiches pictured: corned beef, sauerkraut and Swiss cheese. I ordered pastrami with cole slaw, Swiss cheese and pickles. It took a suprisingly long time for the two sandwiches to be ready, considering there was only one other person waiting for food in the deli area, but I realize you cannot always rush things. (Although, it must be said, my sandwich at Langer's, which was packed with people, took less than five minutes - perhaps one-third the time these sandwiches took.)

The sandwiches were merely okay. Both the corned beef and the pastrami were remarkably devoid of fat ("The leanest I have ever seen," my mom declared) but this also meant there was very little flavor to it. My sandwich tasted like a cole slaw sandwich with some kind of slightly-tasty mystery meat interspersed. It was not terrible by any means, but it lacked flavor, whereas the #19 at Langer's was the most flavor-packed sandwich I have had in years. Schreiner's completely dry rye bread did not help one bit.

Both sandwiches were under six dollars, so they are somewhat of a deal, or at least they would have been if they'd only been a little bit better. I understand Schreiner's is fighting two battles with me: not only comparing their pastrami sandwich to Langer's, but also comparing it to the potato salad and sausages we purchased and consumed at home the next day. Those were all very good.

Will I ever return to Schreiner's? No doubt. But will I ever eat there again? I guess I would be willing to try it again - I can't believe the sandwiches are always like this or the place would not be so beloved - yet knowing how way leads on to way, it would not surprise me if I never do.

Next time you find yourself compelled to eat a Schreiner's, just before you enter the restaurant, make a 180 degree turn and walk across the street to La Cabanita where satisfaction awaits.

Funny, my friend told me to pick a day next week to go there.

dude i love corned beef sandwiches. i wish more places made them!

Wait til ya' see the sliders I made. Probably post on it Monday or Tuesday.