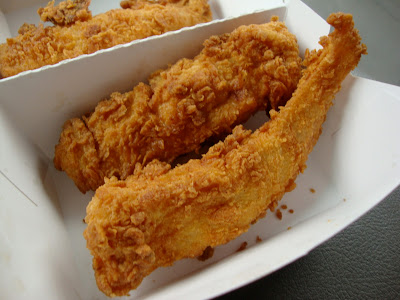 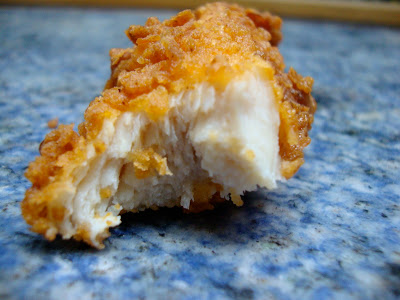 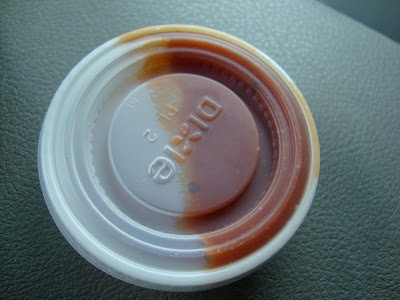 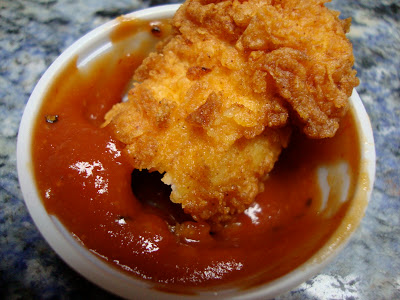 I had no choice but to try these. Back in August I wrote about a disappointing meal I had in Manhattan, comparing the order of chicken fingers I ate to Carl's Jr.'s.  But then I realized that I hadn't actually tried Carl's Jr.'s chicken tenders in years and perhaps I wasn't being fair. So I went and tried them again. They were terrible. I summed up the experience by saying I would only eat at Carl's Jr. again when they come out with new promotions.

Carl's Jr. caught wind of all this and decided to change the formula for their chicken tenders. Okay, that's not really true, but allow me a moment of self-delusion. The new ones are "hand-breaded" and "freshly-prepared." I'm not sure how true those things are, but it's always interesting when a fast food joint markets an item based on its quality, not its size or cost or outrageousness.

I stopped into Carl's Jr. on a rainy day. The place was packed. I mean, it was like In-N-Out on a Friday night. I placed my order then stood around and waited for almost fifteen minutes for my three-piece chicken strips. I took the bag out to the car.

(English question: what are the rules for hyphenating a compound adjective containing an adverb, such as "freshly-prepared"? I have read that a hyphen should never be used linking an adverb and adjective, but I have also read that it is acceptable in certain circumstances. Not that I need a to-go bag from Carl's Jr. to be grammatically perfect, but I am just curious. I like this blog to contain useful information every once in a while. Every once in a great while.)

The chicken strips were very hot, still glistening with oil. You are offered a choice of three sauces: honey mustard, buttermilk ranch, or "sweet & bold BBQ." Ordinarily I would opt for the honey mustard, but the words "sweet & bold" grabbed my attention. I was curious what exactly that meant, so that's what I asked for. I was further intrigued when it was given to me in a plastic Dixie container. What, do they mix it up in the back? Does every Carl's Jr. have their own unique recipe?

It turns out it's the exact same barbecue sauce Carl's Jr. has always used. That's not really a bad thing - I appreciate the pepper in the sauce - but it's nothing special. I should have just gotten the honey mustard.

But what I really cared about was the chicken. And it was pretty good. That may seem like damning with faint praise, I know. The chicken was juicy and hot. (Really hot. I only ate one in the car then drove the mile-and-a-half home and ate the other two.) They were not the same much-too-breaded, previously frozen chicken I ate last time. But at no point did I think Wow these are good.

Are these better than the chicken strips at most fast food places? Yes. But that's like being the valedictorian of summer school or the best quarterback on the UCLA football team: it's not saying much. These are the quality of chicken strips that you would get at a diner. Maybe not the greatest thing in the world, but considering the cost for three was $3.61, they're a good deal. (Although I admit a fondness for the chicken strips in the deli section at Vons, which are better and about the same price.)

The best chicken strips I have ever had were at the Pearl Street Pub in Boulder, Colorado. The worst I have ever had were the previous order I ate at Carl's Jr. last month. These were much closer to the former than the latter. I didn't love them, but I would eat them again, which is more than I can say for almost everything else from Carl's.
Posted by JustinM at 11:02 AM

Do they specify that they were breaded by "human" hands?

"Hand Breaded"? What does that mean?

I imagine they are trying to give you the impression that someone is in the back of the place dredging each chicken breast through egg wash and flour.

I assure you, as I spent several minutes standing near the counter watching the process, that a lady grabbed a bag from somewhere and shook a few already-assembled chicken breasts into the fryer basket. So I have no idea what hand-breaded means.

I prefer not knowing they were hand breaded. I just love the finished product. By the way, I found a food social networking site that has so much to offer to its food loving members. It even has iPhone/iPad application for food enthusiasts like us.

I had these today and I dont agree with you at all, they were super greasy, the breading was thin and had no real taste to it.

Tried these today & was quite impressed. Greasy? Well yeah, they are after all chicken strips. Not something one should have often, but WAY better than others I've tried. I loved how the breading was thin and crispy. I usually end up pulling the breading off of them wherever I go. Side note: I orderd the BBQ sauce and the Honey Mustard. Ick on the BBQ, YUM on the Honey Mustard!

I had them again today... check back tomorrow. I should have gotten the honey mustard!

Yes the tender did look like that look like fried finger I tok them back the tender was about 2inches I paid $4 for that. I can get a 20pc nugget at mc d for that price

I currently work at a Carl's Jr, and by "hand-breaded" they mean breaded by hand. Sure they are probably pre-cooked and frozen because it would take too long if you cooked raw meat the whole time, but I've seen the prep area where the cooks bread the chicken tenders. Maybe some places don't actually bread their chicken tenders by hand but my place does.

Id have to agree with the above post. The chicken tenders (and hand breaded chicken sandwiches) are raw chicken. They're dipped in a buttermilk batter and placed into a container of breading and breaded by hand. Don't worry, gloves are used and its isolated in a corner of the backline away from any possible cross contamination.

Hello! I enjoy your blog, so I've been reading back through all the old posts (less than 500 more to go!). I've been tempted to comment on a number of them, but I've resisted because they're all older ones. Until now! I'm disappointed to see that no one who commented answered your grammar question (though I'm impressed that you asked it!).

As far as I understand it, it depends on the adverb. If it ends in -ly, you generally won't use a hyphen. Quoting wiki: " Other adverbs (such as well) can commonly be used as adjectives; therefore these adverbs without the -ly suffix are accompanied by a hyphen. For example, one could speak of a well-known actress or a little-known actress.".

Hello Thistle. First off, thanks for the compliments, though if you're going in reverse chronological order they probably get progressively worse - back in '08 and early '09 I wasn't putting a whole lot of effort into it. But, as they say, you get what you pay for.

That's certainly what I thought about the hyphen. I have an English degree and my mom, who taught junior high English for decades, also thought it looked weird.