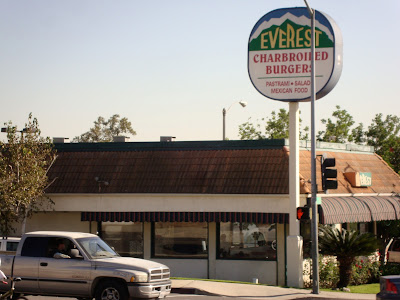 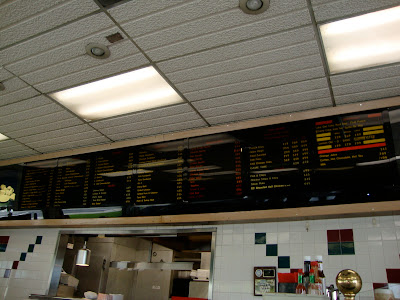 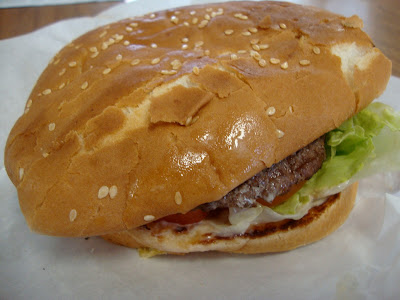 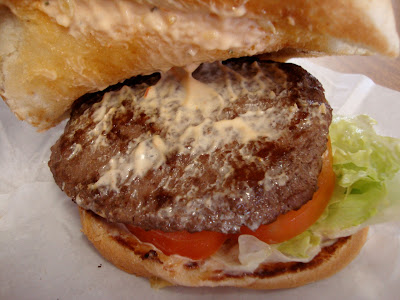 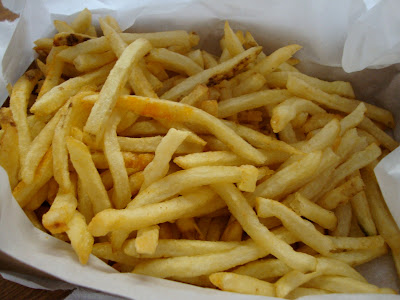 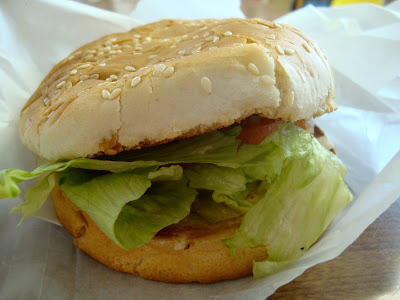 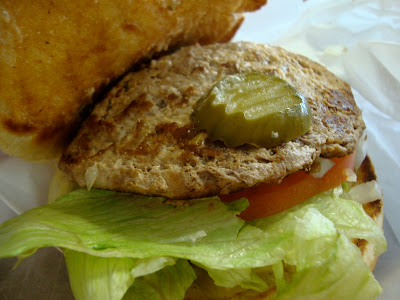 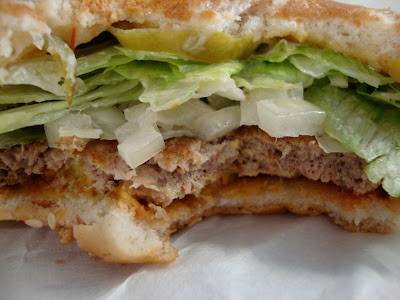 In what has become an almost-daily routine, I headed up Lake Ave to see if Fatburger is open yet. It is not. But I was still in a burger mood. I considered turning around and going to Wolfe Burgers. But, as anyone who has driven on Lake in the middle of the day knows, it can be a parking lot. I wasn't in the mood to deal with that. I remembered that there was a burger place way up on Lake, almost as far up as Altadena Drive, so I decided to go there.
It's called Everest and as soon as I walked in I liked the place. It's nothing fancy at all, just a regular burger joint filled with people eating lunch. It reminded me visually of Fair Oaks Burger and olfactorily of someplace else, something I couldn't quite place. I ordered a burger with everything but onions for a friend and a turkey burger for myself. I turned my attention to the fries, offered in three sizes: regular, large, and "Tops jumbo."
Ah, that's what this place smells like: Tops. Is it owned by the same people? I made a note to check. (I don't think it is, but I have read that it used to be a Tops.)
There were only two of us sharing the fries and I was reasonably certain a large - hell, from the look of the boxes coming through the pass, probably a regular - would be enough for the two of us. But the jumbo size was only fifty cents more and I kind of wanted to see how big it would be, so that's what I ordered.
What I assumed were my fries were done in just a couple minutes and left sitting in the window. Then the guy behind the counter put them in a bag and sealed it. I hated this. The fries looked crispy and shiny with oil when sitting there. They were now steaming inside a bag, making certain they would no longer be crisp. If it had only been a brief time that would have been one thing, but it was more than five minutes before the two burgers were placed in the window. And then the cook and the counter guy argued about which burger was which for another couple minutes.
I took my food and left. When I unwrapped it a few minutes later I was happy that some of the fries remained crispy, and those fries were very good, better than Tops fries ever have been. But far too many of the fries were the limp, soggy fries that Tops is famous for. The box was large, about the size of one of my shoes boxes (and I wear a size 13) so at least there were a fair amount of fries we could eat. We didn't even finish half the order.
My friend took one bite of her burger and said "This is much better than Tops." I tried my turkey burger. It was good. Not as good as Fatburger's turkey burger, but still decent. Too often turkey burgers are dried-out, but this one was plenty juicy.
While I liked Everest, I did not love it and it isn't as good as Fair Oaks Burger. Lunch for two people was just over ten bucks, and it certainly would have been under that if I hadn't intentionally ordered the jumbo fries. It's a good deal, which I imagine is the main part of its popularity. If there weren't a plethora of great burger options in this town I would probably return to Everest at some point. But without trying too hard, I can think of at least two dozen burgers in Pasadena that I like more, so I doubt I will ever return.
Posted by JustinM at 9:51 AM

The only thing that Tops' fries are good for is slathering with chile & cheese - which will always be on my top 10 list of guilty pleasures.

That's one of those funny things that I have written about before - I don't like Tops' fries at all, but I love their chili cheese fries. I can't explain it. Maybe because the Tops fries are so bland they make a better vehicle for the chili and cheese?

first off, hurray for big feet ;) Too bad this joint was a bust - the name is cool at least :)

My grandmother liked to tell the story that when I was born the nurse said I had the biggest feet she had ever seen on a baby. I am above average height but I'm not that tall. Both my dad and my brother are taller than I.

If Everest were the only burger joint in town it wouldn't be a tragedy. It was decent. But a town like Pasadena has a lot of good burger options, soon to be one more when Fatburger opens a few blocks down the hill.

Way back in September the Pasadena Fatburger Facebook page said they would be opening October 15th. I wonder what the hold up has been? I too have been driving and walking by there, only to be disappointed.

Side note - on the actual Fatburger website, their "Coming Soon" page lists restaurants that are opening in 2009. Someone needs to get fired in their new location promotion department.

Where is "FAIR OAKS BURGER"?

And if you have an opinion, what are the top three burger options in Pasadena?

Ben: I know what you mean. I'm not sure what's going on with the company. There have been a lot of Fatburgers I have gone to in the last few years that have just not been good. It's like What is going on here? You would not see that with In-N-Out.

Two Guys: Fair Oaks Burger is way up on Fair Oaks, above Woodbury. I've only been there twice but I really liked it both times. My favorite burgers in Pasadena are (in order): Hutch's, the wild boar burger at Green Street Tavern, In-N-Out, Pie N Burger, the "Kobe Bistro" burger at Tops, and Rick's. There was a time when the turkey burger at Wolfe Burgers would have been in the top 3, but it's just not as good as it used to be.

Interesting. What about the cheeseburger at La Grande Orange?

Walked by Fatburger this evening and bumped in to some guy who was leaving who informed me that they would be open on Monday. For whatever that is worth.

Two Guys: I have heard very good things about the burger at LGO, not only from the Two Guys but a couple other people. Unfortunately my one visit there caused me to hate the place with a passion I reserve only for the Red Sox and Adam Sandler movies. So it will probably be a long time before I return, and most likely I never will.

Ben: That info is worth a lot; it means I don't have to drive by the next four days. Thanks.

I agree about Tops' chile cheese fries. They're fantastic while everything else there is just mediocre.