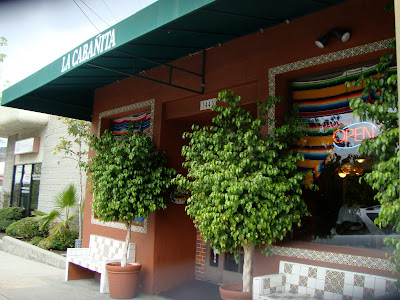 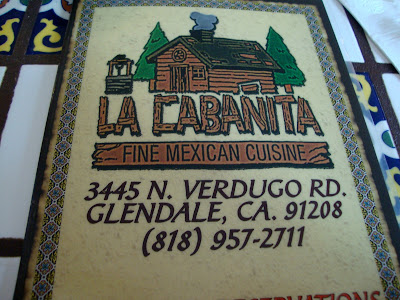 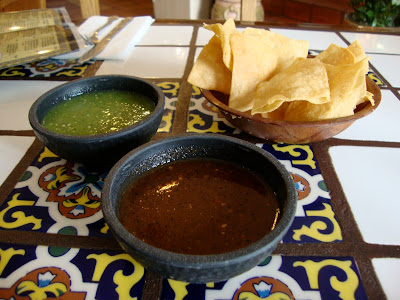 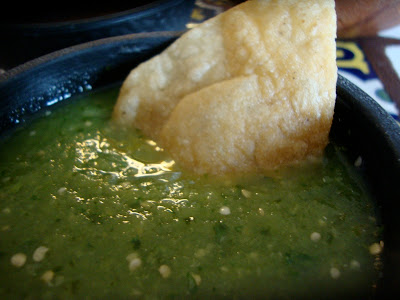 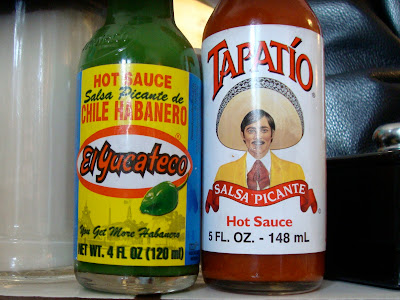 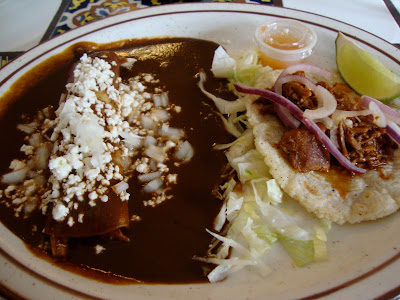 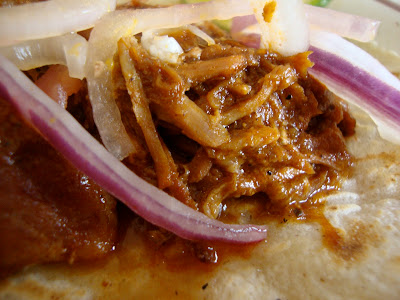 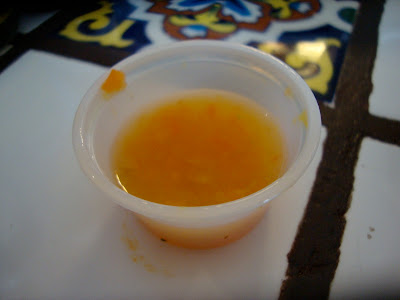 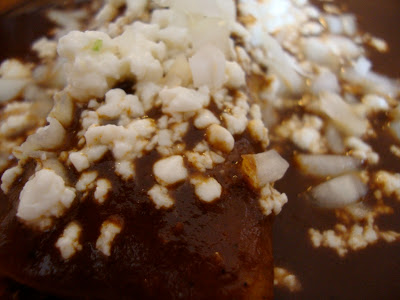 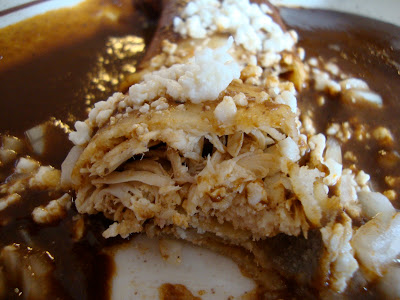 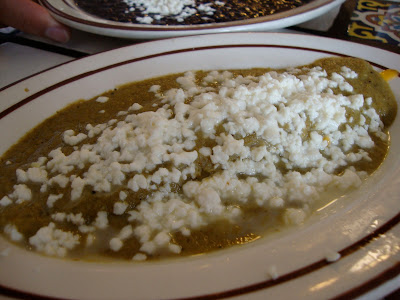 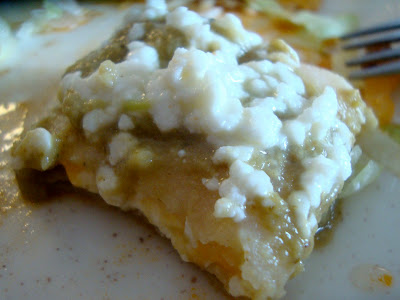 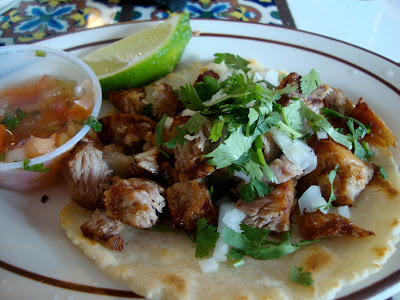 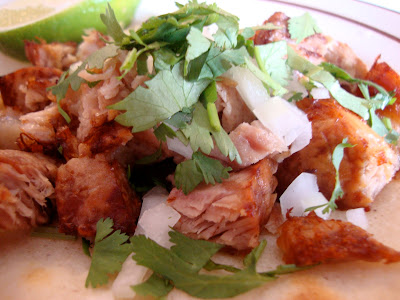 It has been one of the happy surprises of my life to realize as I get older that I do not hate Mexican food.  I grew up eating far too many meals at Acapulco and Pepper's in Arcadia. My brother loved both of those places and when it was his turn to choose we often went to one of them. At the former I ate chicken fingers to avoid the nasty slop I saw at nearby tables and at the latter I filled up on stale chips and flavorless salsa for the same reason. (Not that I was in a strong position to criticize - when it was my turn to choose I'm sure I insisted on Tony Roma's.) Just as I assumed the Lakers would always be great and there would never be a better album than the Back to the Future soundtrack, I thought Mexican food was always bland and brown.

And then far too many years in the wilderness, trying places that, if slightly better than Acapulco, were not very good. There was a Mexican restaurant one mile high in the Rockies that made great Margaritas. They would only serve you two, but then again two were enough to get you drunk, which was a prerequisite for eating their crappy food. A famous restaurant in Los Angeles that served decent although not great food; the quality was never commensurate with the joint's popularity, but it was always fun to sit in the bar and watch the Lakers. And a restaurant in my hometown that is in strong contention for the worst Mexican restaurant in Southern California.

As I got older and more into trying new foods, I eschewed pretty much all Mexican restaurants in favor of Asian cuisines. They were fresher, tastier, more adventurous, I reasoned. A Mexican restaurant, no matter how much praise was heaped upon it by people I trusted, could not compare in my mind to a new banh mi shop or a hole-in-the-wall place promising perfect potstickers.

Once I started blogging, however, and people started giving me recommendations, some of which I followed, I realized that my reasoning had been based on incorrect assumptions. Chain restaurants serving Sonoran-style Mexican food or more specifically Tex-Mex do not represent all Mexican food any more than Pizza Hut's "Big New Yorker" represents New York pizza.

One only need watch a single episode of Rick Bayless's Mexico: One Plate at a Time on PBS to realize that hubcap-sized platters of chips under a deluge of oily cheese and bland red sauce, or sizzling pans of fajitas that may smell great but have all the flavor and charm of a Kraft Lunchables, are not classic Mexican fare. Mexican cuisine at its best is as fresh and flavorful as any cuisine in the world. Last year, an article on Forbes.com ranked Mexico City as the 4th best city in the world in which to eat well. No American city cracked the top 10. A few months ago a friend of mine vacationed in Mexico City and reported that everything he tried - from the open air markets to the poolside snacks to the expensive restaurants - was "simply amazing."

So the other day when my friend Tim told me about La Cabañita - a Mexico City-style restaurant in Montrose - it got my attention. (I'm not sure why I didn't immediately recognize the name; Jonathan Gold wrote about it in Counter Intelligence, which I'm pretty sure at this point I have read more times than The Great Gatsby and Blood Meridian combined.) Just this year Tim has introduced me to both The Village Idiot and Langer's, and his knowledge of Mexican restaurants is tops of anyone I know. He told me to pick any day and we would go there for lunch.

Two days ago we headed up to Montrose in a light rain, snagging a parking space just in front of the restaurant. "Jeez," Tim remarked, "I usually come here at night and have to wait in a big crowd just to put my name in." We were seated promptly. There is a gorgeous mural of Mexico City painted on the wall and I wanted very much to take a picture of it, but every table against the wall was occupied and I did not want to disturb anyone, so I did not.

I've written before - although the idea is not unique to me - that you can gauge the quality of a Mexican restaurant by the chips and salsa. If this is true, then I knew immediately that La Cabañita was probably going to be some of the best Mexican food I have ever had. The chips were warm, thick, and flavorful. "These are like the chips I make at home," Tim commented. "I'm guessing there's some lard involved in the process." Whatever. They were delicious. At first I could not decide if I preferred the smoky red salsa or the tangy green. But after asking for a second helping of chips and almost wiping clean the bowl of salsa verde, I have to say the green was my favorite.

I ordered a taco de cochinita pibil (Yucatan slow-roasted pork) and an enchilada with chicken and mole. Tim ordered a combination of tacos (both were covered with guacamole so I did not take a picture) and a cheese enchilada with green mole. It is not an exaggeration to say the food arrived in less than five minutes.

I took a bite of the taco first. There were a few slivers of red onion on it and a small container of habanero sauce which the waiter admonished me to "be careful" in using. But I did not bother opening it for a simple reason: nothing could have improved the taco. It was the best soft taco I have ever had. The pork melted in my mouth and I licked the slightly sweet, slightly spicy sauce off my fingers, something I have never done before.

Mole is not something I usually like very much. Too often it is either much too sweet or tastes like it has been burned. But I had expressed this concern to Tim before our visit and he had assured me I would like La Cabañita's mole. And he was right. It was spectacular. The bold taste of chilis was the dominant flavor, not sweetness. The chicken in the enchilada was a touch on the dry side but the house-made corn tortillas (not to mention the sauce) more than compensated for it.

Tim gave me a bit of his enchilada in the green mole. It was fantastic, even better than mine. Next time I eat at La Cabañita I will be ordering one of these just for myself.

I was still a little hungry after I finished both my items. I knew if I waited a while the hunger would subside, but I was loving the food, so I figured why not? I ordered a carnitas taco. (I was craving another cochinita pibil, but wanted to mix things up a bit.) The taco arrived in less than three minutes. It was good, of course, but too dry by itself. A small container of pico de gallo was on the plate but it didn't look like anything special so I spooned some green salsa onto the taco and shook a few slugs of Tapatio from the bottle on the table. Much better this way.

It seems sweeping to state that this lunch at La Cabañita was the best Mexican meal I have ever had, but I cannot think of a better one. I will certainly return; I'm hoping my brother sees this and wants to go with me. Maybe I can force him to admit that it's better than Acapulco or Pepper's.
Posted by JustinM at 10:20 AM

Today is my birthday. That means that I can go wherever I want for lunch, right?
Cochinita pibil tacos are in my very forseeable future!

That looks really good. Time to take the baby on a field trip.

Funny you mention both Bayless and Gold, as they were just recently in a little squabble over socal Mexican food.

Bryce: I would keep the baby away from the habanero salsa. At least until after her first birthday.

Less than five seconds after you posted your comment I got a picture message from the birthday boy who is eating the pozole at the moment. It looks really good, too.