A Trio Of Sliders 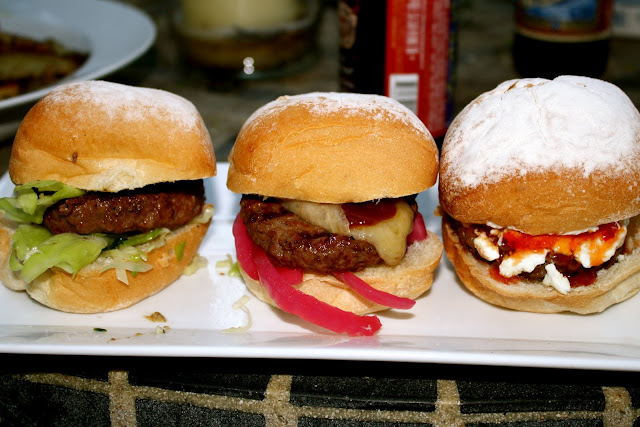 One year ago I made three different kinds of sliders and wrote about it - looking back, the toppings all look pretty good but I just can't get past those Fresh & Easy slider buns. They're cheap, and when steamed for a few minutes they are better... but overall, they just aren't very good.

The other night I decided to make sliders again, so I went to Bristol Farms and picked up potato buns: they are freshly baked, soft as a cloud and just firm enough to hold together whatever kind of burger you might assemble. 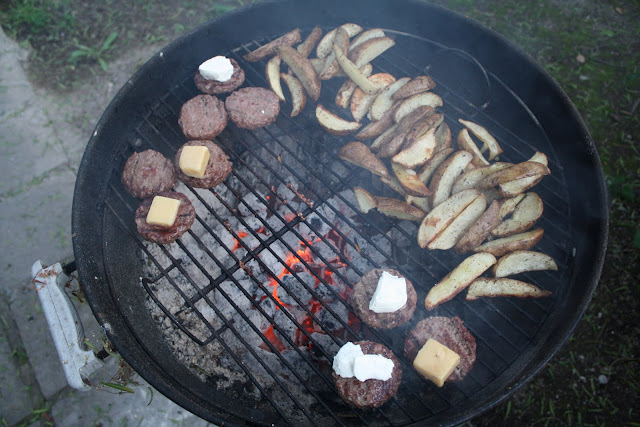 I invited Tracie over and we threw back a few beers while waiting for Elizabeth to get home; once she did I put the patties on the grill. Earlier in the day I had cut a few potatoes into wedges and roasted them in the oven with olive oil and spices. I put these on the grill to warm up. And, of course, to get some cool-looking grill marks. 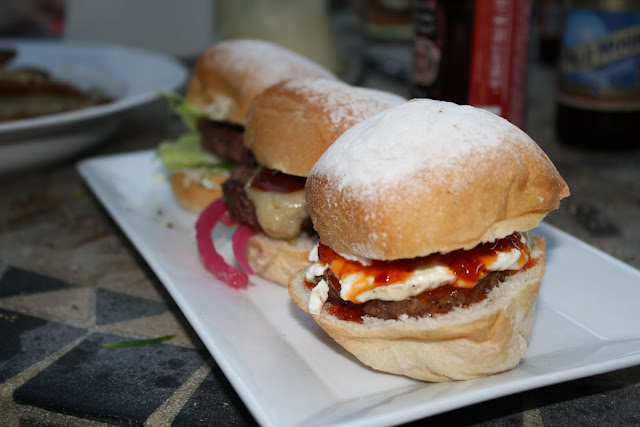 I melted cheese on some of the patties and took them off the grill, laying them on the buns and adding condiments. 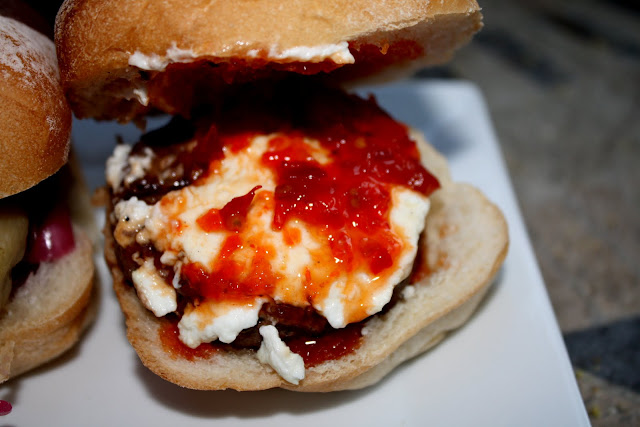 The first slider was melted goat cheese, topped with the sweet jalapeno sauce that my friend Carla bought me at the South Pasadena farmers market two weeks ago. Since then I have used it on pizza, sliders, sandwiches, veggies... it is great no matter what it is complementing. (The only thing I haven't done yet that I am anxious to try is add it to a Zankou chicken tarna wrap with a generous slathering of garlic sauce. But we'll get there eventually.) 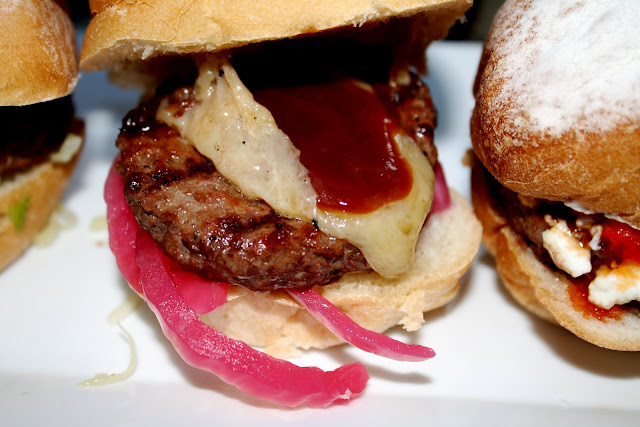 The second slider contained English cheddar with onion marmalade (a Fresh & Easy cheese that is indistinguishable from Trader Joe's English cheddar with caramelized onions, and I love both), pickled red onions that I made myself, and F&E's whiskey barbecue sauce. This was a flavor-packed slider and I wouldn't mind making a full-size burger one day with all of these toppings. 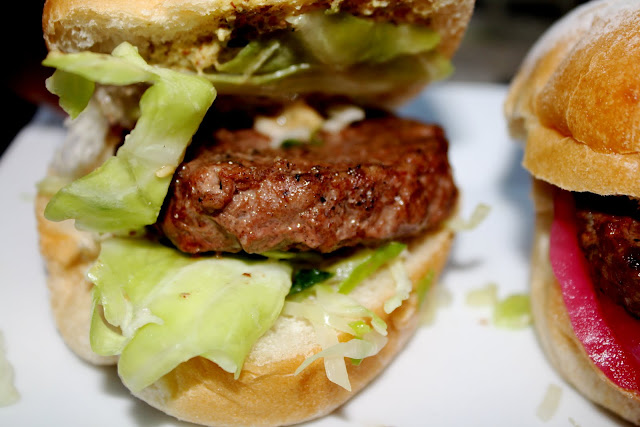 The final slider was cheese-less, but I spread wasabi-sake mayo on the bun and added some Bristol Farms "Chinese cole slaw," a mix of cabbage with an oil dressing, crispy noodles and sliced almonds. This was the least popular slider of the evening. Tracie isn't a big wasabi fan, so her reaction was understandable. I didn't like it as much as the others for reasons I couldn't quite place. It was missing another flavor. Perhaps it was just the lack of cheese. 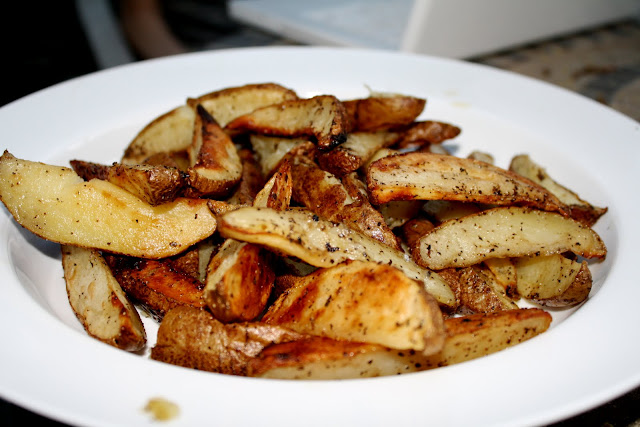 The potatoes were outstanding, a wonderful side dish. I'd originally planned to put some potatoes on each person's plate, but I got so involved topping the sliders that I just decided to dump them all in a bowl and serve them family-style. Nobody complained. 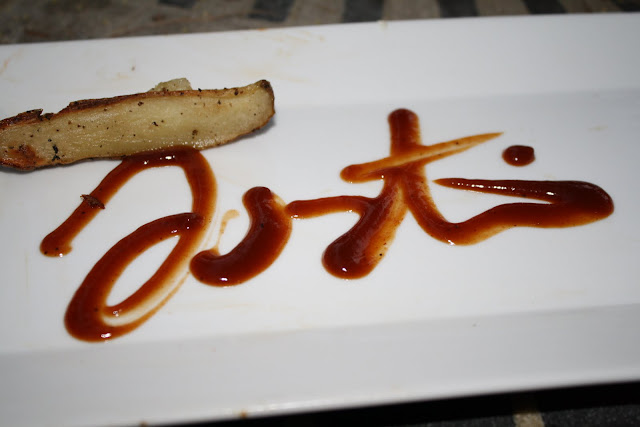 "Now you're just being pretentious," Elizabeth said.
Posted by JustinM at 10:37 AM

Knowing that you enjoy making sauces, you might be interested in a very simple recipe that produces a very good steak type sauce. Combine Heinz Chili Sauce (or the "Homeade" brand)with Worcestershire sauce at a roughly 65%/35% combination, favoring the Chili Sauce.

Please know that the end result is not overly tomato-ish, and very good.

Stephen: For years I've made a sauce of ketchup, Worcestershire, and lemon juice. Chili sauce sounds like it might be even better.

Bryce: You're killing me. This is like watching Eastwood try to get on his horse in Unforgiven. What happened to the days when we used to shoot pool at the Rancho until 1 in the morning and then go out for tacos? Now it's all smiling frogs and farts with you.

I wish I lived by you guys - you always seem to have a lot of fun.

You're not married, right? Cuz there are plenty of women looking for a man who can cook for them & bring them breakfast in bed.

I don't have room for baseball and a wife...