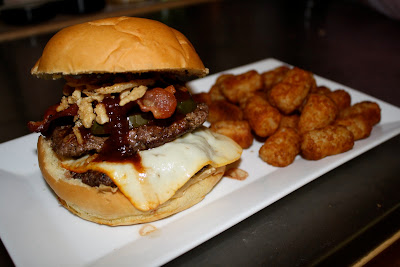 I was talking to a friend of mine yesterday who said something along the lines of "No more of those nasty fast food burgers, I wanna see you make your own burger, you haven't done that in months." (We got into a discussion about whether or not sliders count and he claimed no; I'm not sure I agree with that, but I don't disagree with it enough to argue.)

Coincidentally, when I emailed Elizabeth yesterday afternoon and asked what she wanted for dinner, she said "Burgers?" That was just fine by me. I decided to make burgers, for three reasons: 1) to please my buddy, 2) to show why I rarely eat burgers from fast food joints, and 3) because a burger sounded delicious. 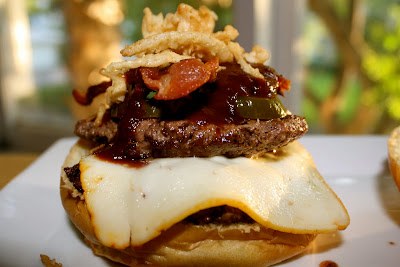 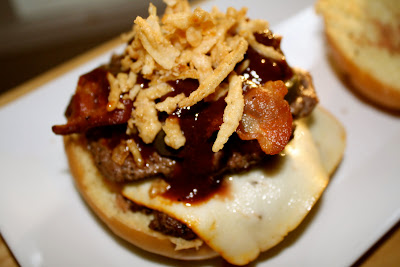 I formed two small ground beef patties and cooked them in a pan, stacking one on top of the other with a slice of Muenster cheese inbetween.  I then added pickles, bacon, and fried onion pieces. I wanted to add a barbecue sauce to give it a bit of zing, but none of the barbecue sauces I had in my fridge would do the trick. They were all too sweet for what I wanted here; this burger deserved something special. 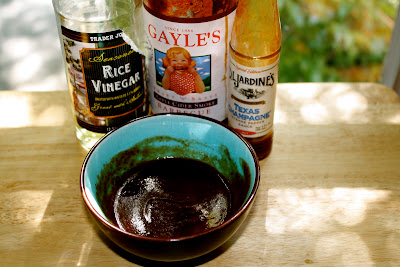 I mixed up my own sauce, using Gayle's "Apple Cider Smoke" barbecue sauce as a base. The sauce is nice by itself, better than most bottled sauces, but still not what I was looking for. So I added some vinegar to thin it out and give it that, well, vinegary kick, and several drops of Texas Champagne to heat it up. Now this was what the burger deserved. 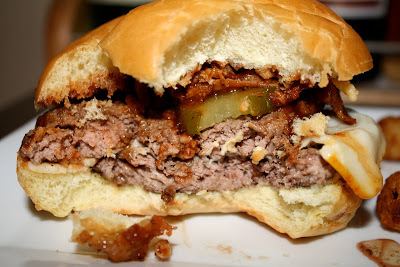 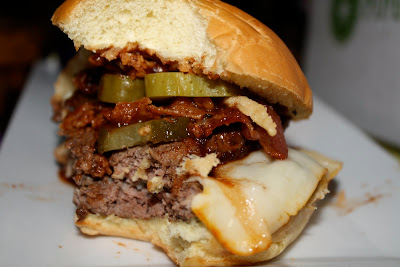 It was fantastic. High quality beef, smoky bacon, crunchy pickles, semi-melted cheese, crispy onions, and that tangy sauce. I tried to figure out the cost of this burger as best I could; I came up with a figure of about $3.75. Cheaper than the Jack in the Box burger I wrote about yesterday, and infinitely better.

Yes, it took some effort to gather up the ingredients (I had to go to the store for the beef and buns; the rest were in the fridge) and it took more than twenty minutes to make the burger. But it was worth it.
Posted by JustinM at 12:37 PM

I didn't have any Jack in the Box fries with my sirloin burger because I don't like Jack's fries at all. Other than Del Taco and McDonald's (but only the latter if they're fresh-out-of-the-fryer hot) I don't really like any fast food fries.

But I'm not a fan of tater tots, either. Those were for Elizabeth's benefit. They were okay, though.

If I had your creativity I don't think I would ever get fast food... and I love fast food!