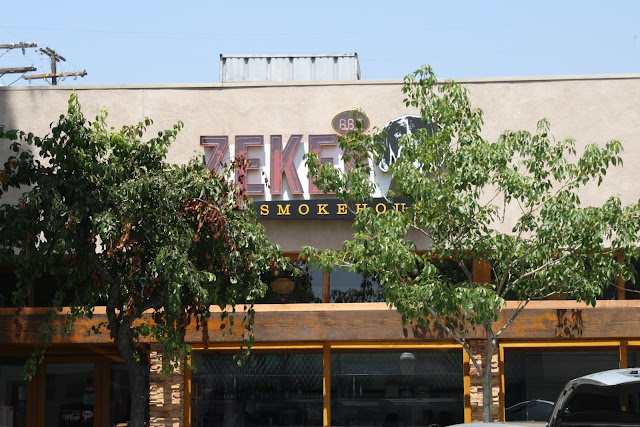 I've written of Zeke's Smokehouse several times on the barbecue blog, so I thought a post here would be in order (something like 200x more people read this blog, though to be fair I only update the other one a few times per year). Zeke's can be inconsistent, but when it's good it's great, and I find their sides addictive. I don't go there nearly as much as I used to - it's actually been over a year since I'd been there - but the other day I got a strong craving for two of their items, so Elizabeth and I headed up to Montrose for lunch. 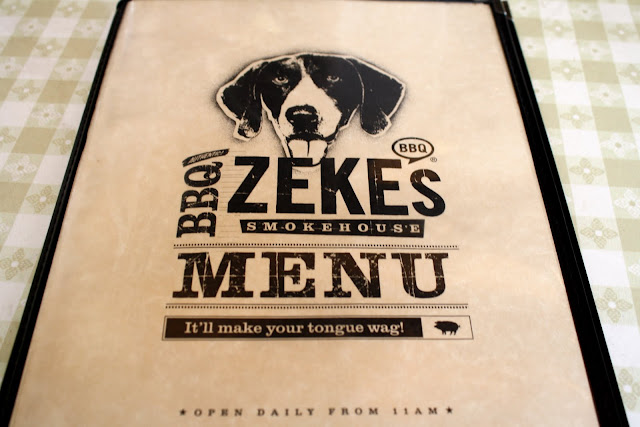 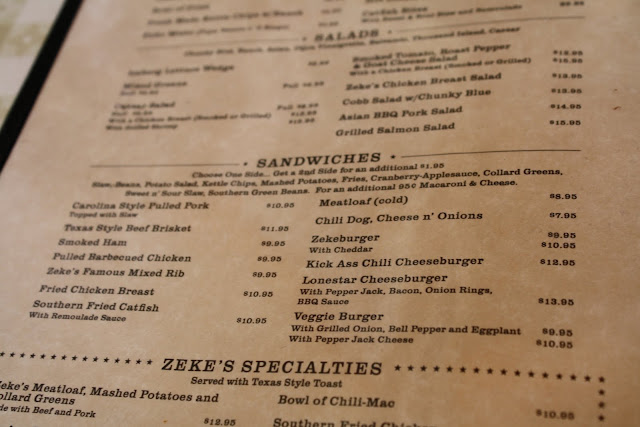 I know the menu by heart after all these years. If I'm with a group of people I will order appetizers, but usually I just get a sandwich. They come with one side; a second side is an additional $1.95. On this occacion I opted for the Carolina Style Pulled Pork sandwich. (In this case the adjective "Carolina Style" refers simply to the fact that they put slaw on top of the pork.) 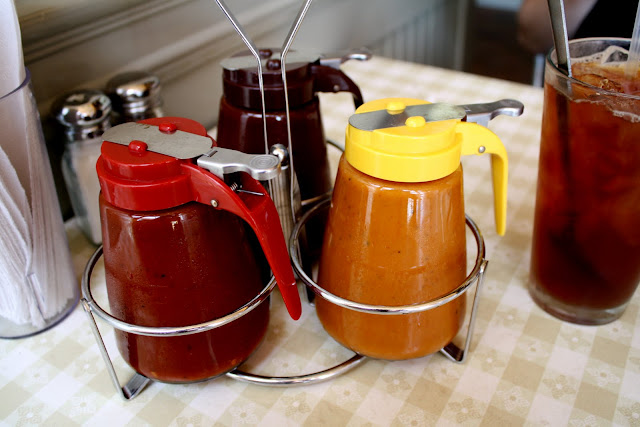 Each table at Zeke's has three sauces on it: The KC-style, a sweet sauce that I usually don't bother to try, the Texas-style, which is pretty much the KC-style with a little bit of heat added, though not enough, and the Carolina-style mustard sauce. That last one is my favorite. Although I wish it had a more pronounced vinegar flavor, it is still a nice complement to Zeke's pork. 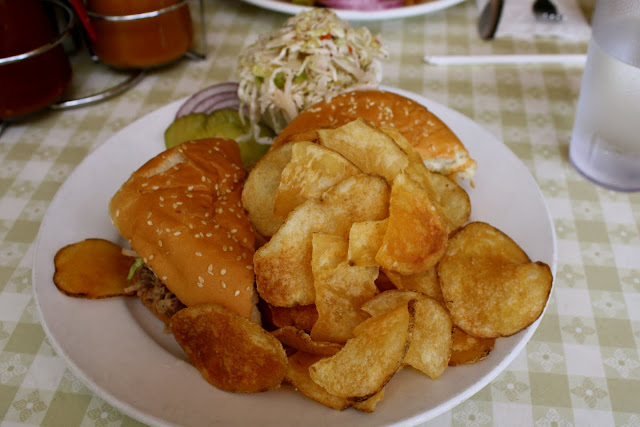 My pork sandwich with kettle chips and sweet and sour slaw. This wasn't the best pork I have ever had from Zeke's, but it was very good. As a bonus, the bun was much better than it used to be; in years gone by it was always a dense bun that distracted from the flavor of the meat, but this bun was much softer and didn't get in the way.

The kettle chips were great, as usual, some of the best homemade potato chips I have ever had. Often restaurants over-salt their chips but Zeke's leaves them alone, letting the flavor of the fried potato shine through. (The mustard sauce always goes well with the chips, though usually I request a side of spicy chili mayo. But I didn't this time.) 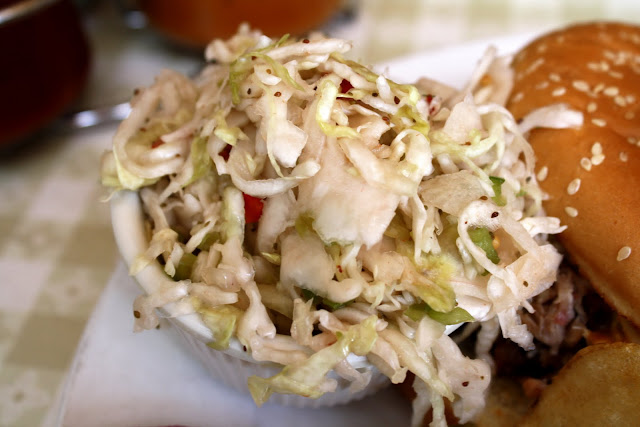 The sweet and sour coleslaw is one of my favorite slaws in the area, a vinegary, peppery cabbage and bell pepper mix that is the opposite of the drowning-in-mayo cole slaws that I abhor. If you don't like vinegar, this isn't for you. 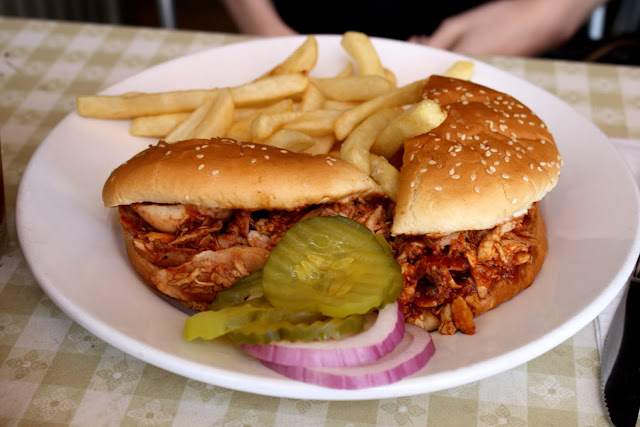 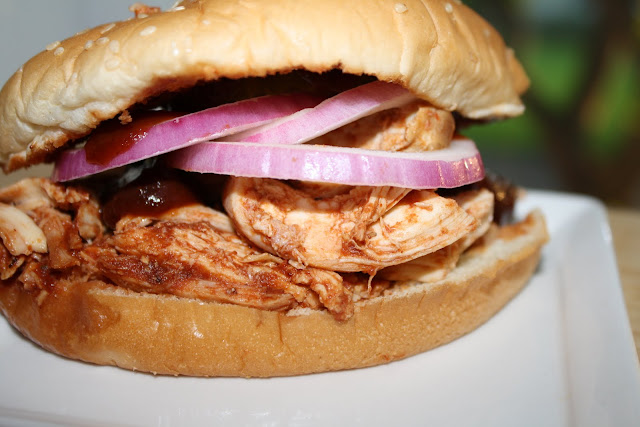 Elizabeth had the smoked chicken sandwich with fries. She enjoyed it but only ate half at the restaurant and was then nice enough to let me eat the other half in the evening. I added some red onion and spicy barbecue sauce to it and enjoyed it very much, though not as much as the pork.

It will probably be a few more months before I return to Zeke's. There are several barbecue places in Los Angeles that I prefer. But I do like the place and I am sure that one day in the future I will get a craving for some of that slaw and those potato chips and I will be back.

Wow - I literally just drooled on my computer. If you happen to get a recipe for that vinegar slaw, I would love to try my hand at it. Anything vinegary is fine by me!

If you create a copy cat recipe of the slaw you should post it. I'd like to give it a try.

Their chicken sandwich is always tasty! I should add slaw next time though.

Looks good Justin. Can't beat Kettle Chips as a side. I'm a lot like you Carolina based mustard sauces are really underrated in BBQ, and I will always go for them if offered.

Dense Buns kill BBQ. I'm partial to the sweetness and squishy texture of a potato roll myself. If you ain't giving me that, I really see no reason to even use a juice mopper.

Fritos and Jessica: I will give it a try, this weekend perhaps.

Liz: Next time I will make sure you do.

Adam: Mustard and vinegar sauces are by far my favorite. Funny, I was just at the store picking up potato buns for the carnitas mini-sandwiches I'm making tonight.

I love vinegary slaw too, although I'd rather eat double helping than eat one of those sandwiches. Why do I even read your blog??? lolz. jk