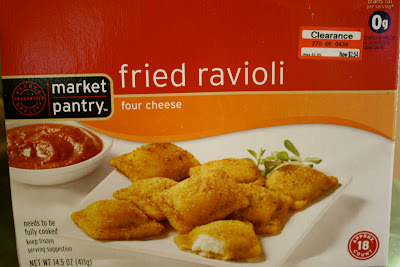 I've written before - many times - of the toasted ravioli Jack in the Box used to sell. They were, pretty much without exception, my favorite fast food item ever. But I've long since given up on ever seeing them return, like the Arch Deluxe, Shanghai McNuggets, and Kendrys Morales.

Years ago in St. Louis I had toasted ravioli twice in one day; at both restaurants the waitresses told me that toasted ravioli were invented in St. Louis. I never really learned if that's true or not. (Even reading about them online, there appears to be a consensus that St. Louis is where they originated in America, but nobody can say for sure.) But I didn't really care, because they were delicious.

A year ago I came across a box of these ravioli at Target and decided to make a pizza: I topped a plain cheese pie with fried pieces of ravioli, pepperoncini rings, and doused it all with hot sauce. It wasn't as good as I'd hoped it would be.

A week ago I was at Target and another box of the ravioli were on "Clearance" for $2.54. I decided to give them another try. 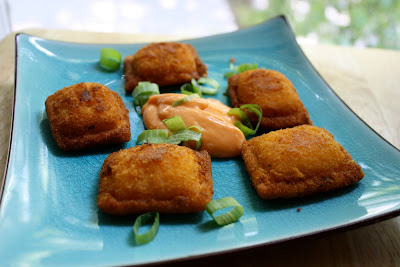 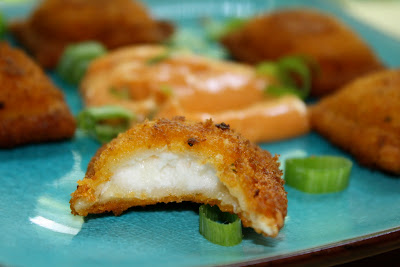 When I needed an afternoon snack I fried up a few of them and mixed up a sauce of mayo, chili sauce and chipotle hot sauce. The ravioli were tasty: crispy outside, creamy and cheesy inside. They weren't as good as Jack's used to be, but they still did the trick. The sauce, on the other hand, was disappointing. It was too creamy and not spicy enough. I decided the next time I made these I would try to come closer to the marinara sauce that Jack used to serve. 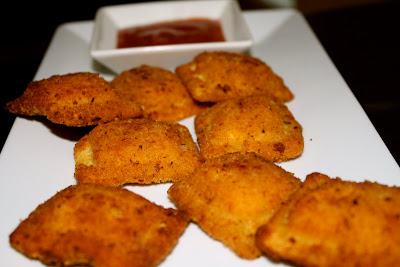 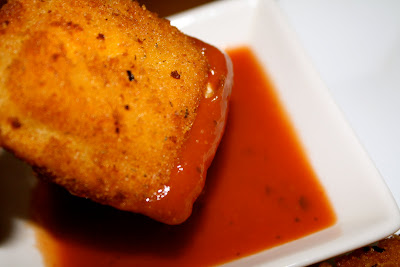 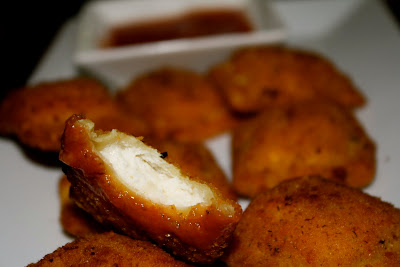 So a day later, when Elizabeth said she needed a snack and that fried ravioli sounded good, I fried up another batch. And this time I made a different sauce: I took a jar of spicy marinara and basil sauce - which is delicious but full of big chunks of tomato - and pureed it in the Cuisinart mini-prep. Then I added some fresh basil and a couple cloves of garlic and gave it four more pulses.

This was much better, a wonderful spicy complement to the cheese.

I know Jack in the Box's toasted ravioli can't possibly be as good as they were in my memory, but I do miss them. This Market Pantry version is okay for what it is, but nothing special, and I imagine at least another year will go by before I eat them again.

I really like these. They definitely make a good snack.

In one of Nigella lawson's cookbook, there is a really easy recipe for these. basically sink some fresh ravioli in buttermilk, then in breadcrumbs then shallow pan fry in olive oil in a non-stick pan for a minute or two.

That's easy? That's like three steps! These ravioli only have one...

Just kidding. And thanks for the compliment.

good to see the market pantry clearance item :-) you know i work for target now (well mba intern)... i never remembered jack having the fried ravis but then again back in the days i had a one track chicken fajita pita mind.

I never remember Jack having t-ravs either, but I'm in St. Louis, and you can pretty much get toasted ravioli everywhere -- including gas stations! There is a lot of lore surrounding their invention, and at least two restaurants on "The Hill" claim they started there. Whatever, they're damn tasty!

No doubt. I was staying at the Embassy Suites by Laclede's Landing so I went out for lunch and dinner right there. I can't remember the name of either restaurant but they were both delicious.

Hopefully "clearance" does not mean that they are gonna stop stocking them.

My guess is that some of the things got defrosted and they were trying to unload them. The ravioli weren't noticeable, but some of the other things on clearance were deformed and had obviously been slightly defrosted and refrozen.

St. Louis is where I first heard of and tried toasted/fried ravioli. That was about 20 years ago. Anyway, did you happen to notice if Target sells fried beef ravioli? I find the cheese gets to be a bit heavy before I'm full. But I think I could eat toasted beef ravioli all day.

For a time, Walmart had frozen beef ravioli that could easily be coated and toasted, but I stopped seeing them, and then I moved to an area where Walmart isn't a place to buy groceries.