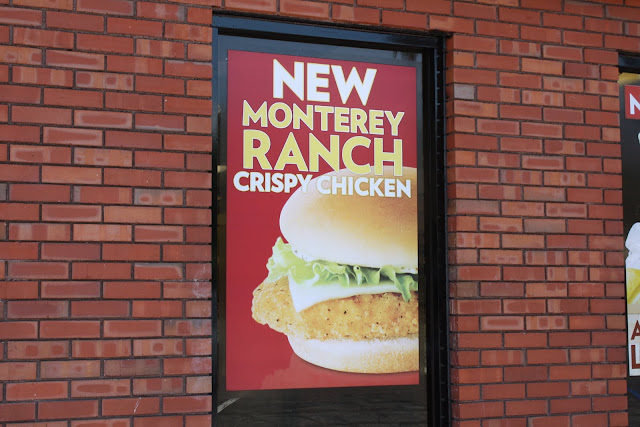 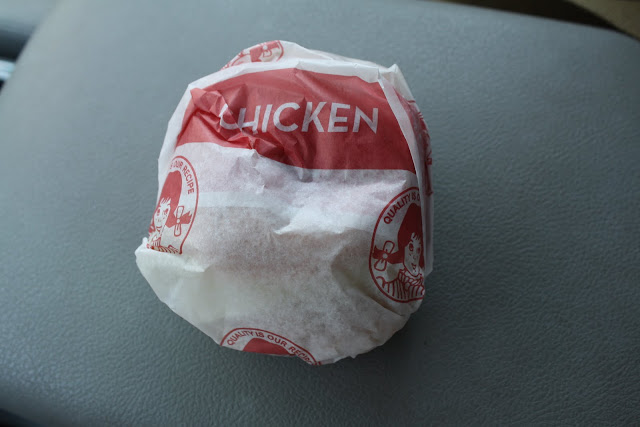 It was twenty years ago when I first tried the Wendy's Monterey Ranch Chicken Sandwich. ("Twenty years now, where'd they go?") And I loved it, a crispy chicken breast covered in Monterey Jack cheese, and a ranch sauce with bacon bits. Those were the days when I loved ranch; one of my favorite snacks were MicroMagic french fries - for those of you who belong to different generations than I, those were microwavable fries from the same company that made microwavable milkshakes - dipped in ranch dressing.

Then I guess the sandwich went away (although to be honest I don't remember; there was about a decade where the only fast food I ever ate was In-N-Out,) briefly reappearing from time to time. I remember the sandwiched fondly, but in the same way I loved those microwavable fries, or the WWF wrestling that I watched while I ate them: it was fun as a kid, but would I really like them now?

Over the weekend I read a press release that Wendy's would be releasing a 99-cent version of the sandwich, called the Monterey Ranch Crispy Chicken Sandwich. I had to give it a try.

Wendy's was a zoo, as always. It took me more than ten minutes to place my order, but less than thirty seconds to receive my food. There were about a dozen screaming kids running around so I took the sandwich to the car. 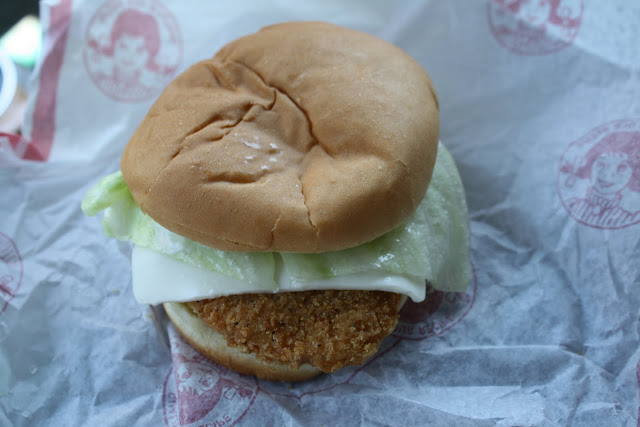 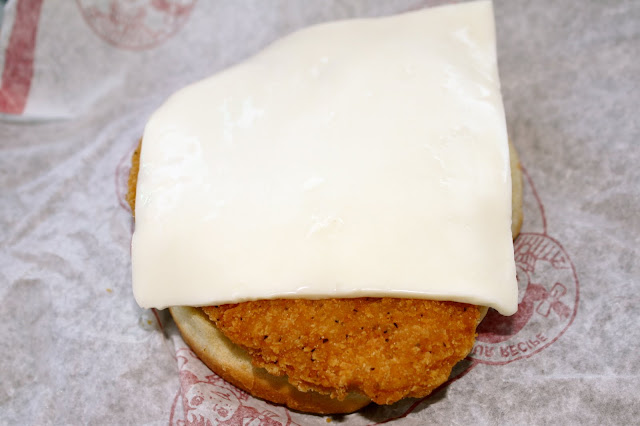 For a 99-cent sandwich, it was certainly pretty. I didn't seen any ranch sauce - not that I really cared, as ranch is one of my least favorite sauces these days - but there was a thick slice of white cheese covering the chicken patty. 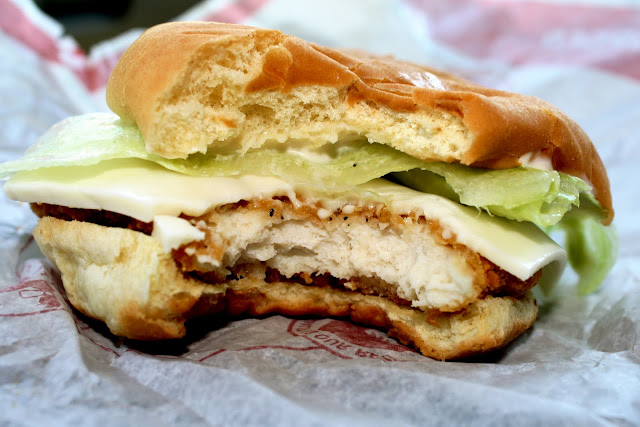 And it was quite good. Not great - like the second time I tried the Asiago chicken sandwich - but very good, and, considering the 99-cent price tag, a great value. This easily would have won The Great Value Menu Chicken Sandwich Showdown last summer. The chicken was crispy, the lettuce was fresh and the bun was soft. 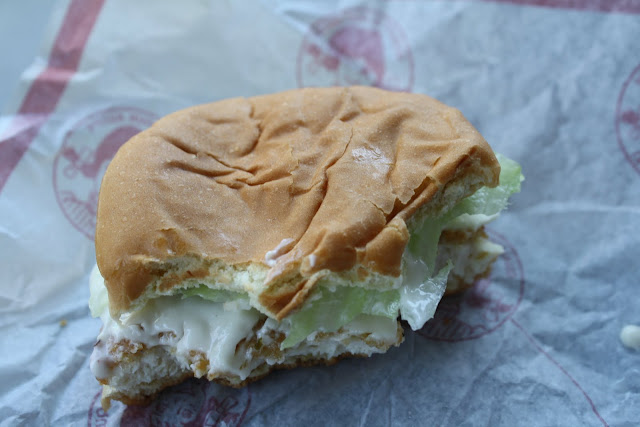 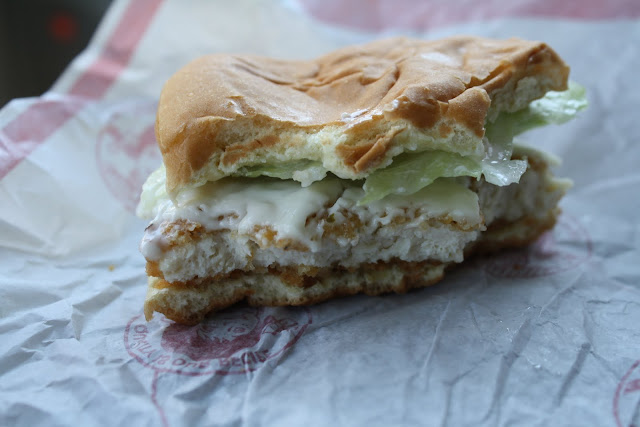 I found the ranch sauce in the second half of the sandwich - it was all piled there. But I have to say, it was the least offensive ranch dressing I can remember having in a long time. It had a bit of a tang to it, and, while I would never call it "zesty" (as Wendy's does in the product description) it was not the creamy, much-too-sweet Hidden Valley Ranch dressing that I used to dip those microwaved fries into.

I don't know if every Monterey Ranch Crispy Chicken Sandwich is going to be as good as this one (my guess is no) but if so, this is going to be a huge hit. Wendy's already had my favorite value menu in the fast food business - thanks mostly to their spicy chicken nuggets - and this only makes it better.
Posted by JustinM at 9:54 AM

Found your site via Pop Culture Junk Mail. Just wanted to say that I've been digging what I've read so far.

Anon: Well, I think when I started getting into hot sauce and vinegars - so maybe ten years ago. I just find it so blah. I don't hate it, I just can always think of some other sauce that will better complement whatever I'm eating.

Shawn: Thanks and welcome aboard.

It must be a horrifying task for their advertising people to have to sell this kinda "food"!

The original from 20 years ago has always been my favorite fast food sandwich of all time. Looking forward to seeing if the new reincarnation is as good. Is this one missing the bacon bits, though?

What's up with all the anonymous comments all of a sudden? lol

Tried this the other day after my brother recommended it. Great value, and I enjoyed it. Definitely better than most fast food sandwiches at that price point or even higher.

What I want to know is what on earth have they done to the original chicken sandwich. The bread they use now sucks, and the chicken fillet has become tiny. And no, I haven't been accidentally ordering the smaller "crispy chicken sandwich" either. I just moved to the Pacific Northwest, and with Wendy's sucking and there being no Chick-fil-a here, I'm feeling like my chances of ever being satisfied again are shot to hell.

This overgrown overprocessed chicken McNugget is pathetic. It does a disservice to the original. Needless to say, I was underwhelmed. Too bad, because like I said, the original was one of my favorite sandwiches ever.

That sucks. Mine was pretty good. Not great, and I haven't gone back for another, but I had no problem with it, especially for 99 cents. But I agree it's nowhere near as good as the original.

By the way, you don't have to have a Google account to enter a name. You just click the "Name" bubble and type your name. You don't need a verification or password or anything.

The Monterey jack sandwhich of my youth as well was one my favorites. Its a shame they didn't just bring back the original.

was never a really big fan of ranch dressing myself,but the original sandwich from the 90's was the absolute best fast food sandwich ever...whether chicken,burger,fish,roast beef dosent matter,it was awesome