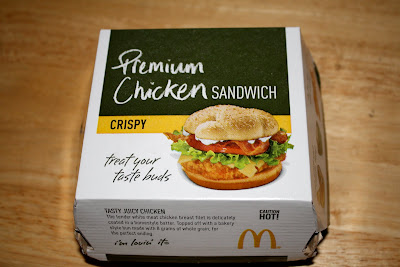 My least-favorite commercial at the moment, by far, is the AT&T Network commercial where the guy doesn't get the message that the flash mob in Grand Central Terminal has been pushed back a half-hour and starts he starts dancing by himself. Would I find it so odious if I didn't have to watch it fifteen times during every baseball game I watch? Maybe not... but I would still hate it.

My second least-favorite commercial is the one where the two strangers, both eating McDonald's "Premium Chicken" sandwiches, say the exact same words at the same time. At first it was somewhat cute; by the time they both simultaneously blurt out "An elephant has four knees"... I was just annoyed by it.

But I doubt the makers of the commercial would give a damn, because it got me thinking: I tried one of the "premium" line of McDonald's chicken sandwiches when they debuted in the summer of 2005. I wasn't a blogger then; I rarely even ate fast food. But I was driving up I-5 in the Central Valley on a Friday night and very hungry. I wasn't sure what options there would be after I passed the off-ramp with the McDonald's so I thought: What the hell, let's give it a try.

And it was terrible, a rubbery piece of chicken on a stale bun. In all my visits to McDonald's in the years since - and there have been many; I live with a woman who loves the Golden Arches - I have never even considered trying another sandwich from their premium line.

But here I am six years later, watching a commercial that made me want to throw the remote at the wall - although to be fair, the Angels had just brought in a relief pitcher (whom I've hated all season) with the bases loaded and he promptly gave up a grand slam on his very first pitch, so really my anger was 95% due to that - and it made me think: Maybe I should give it another try. The ads do say that they are using a new bun. Maybe it'll be better this time around?

So for dinner I went down to McDonald's and ordered the Premium Crispy Chicken Classic Sandwich, wishing that they had another couple words they could tack on to that name, because five isn't enough. (Does anyone ever think: You know, the Double-Double is delicious but I just wish it weren't so easy to say. I wish they called it the "Premium Double-Meat Double-Cheese Classic Burger"?)

One minute after I received it I was home and I opened the box. 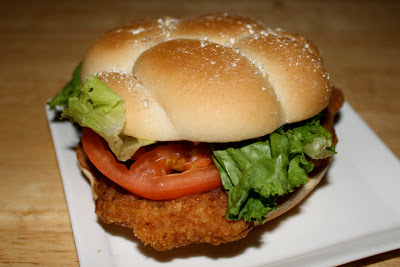 Damn, it actually looked pretty good. I mean, sure, there was a slice of tomato poking out, one of the ugliest things you will ever see in life, but the bun looked golden and soft and the dark-golden chicken looked okay. 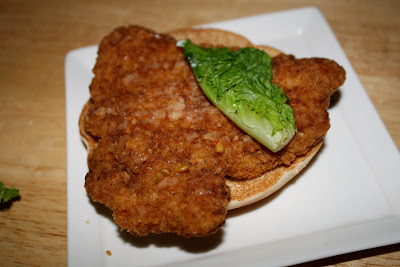 I removed the tomato and took another picture. Thankfully, there wasn't a disgusting amount of mayonnaise on the sandwich - like, say, the chicken minis from Burger King - and I took a bite. 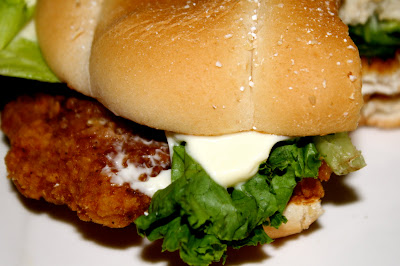 Wait a second... Where the f**k did that come from? I swear I did not play any tricks with the photos nor add any mayo after I took that first picture. I did not seen any mayo on the sandwich, I took a bite, and suddenly mayonnaise was everywhere.
But I didn't really care, because the chicken was so absolutely terrible that nothing could have made it worse. There could have been a cockroach in the middle of the sandwich and my first reaction would still have been "Wow, this chicken sucks."
(By the way, I once drank two-thirds of a pint of Guinness at a bar in Pasadena - all of you who know me know exactly what place I'm talking about - before realizing that there was a cockroach submerged in the bottom of the glass. Good times.) 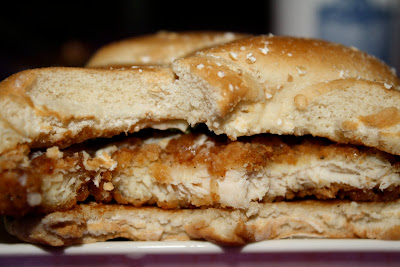 The chicken patty was thin and overcooked. The batter was crunchy in a not-good, cooked-way-too-long kind of way and the chicken had zero flavor to it. I have had the McChicken sandwich several times off the Value Menu and it has always been better than this. And, at $1.19, about one-quarter the price. I admit the bun was quite tasty but I just couldn't get past the chicken to give it its full due. 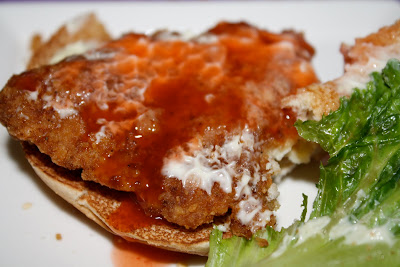 Did a slathering of Trappey's hot sauce help the sandwich? Nope. Nothing could have.
Maybe in 2017 I will try this sandwich again and hopefully the third time will be the charm.
Posted by JustinM at 10:22 AM

I cannot stand that damn AT&T commercial. Can't stand this sandwich either. Disgust.

Please, please tell me you threw it away!

Fritos: Then you may be my friend.

Anon: I did not finish the sandwich, which is very rare for me. It was inedible in most parts.

i love your tomato hatred. and im a tomato lover!

Then we would be good dining partners because you could always have my tomatoes. One of my favorite things about Elizabeth is that she hates water chestnuts so when we get Chinese food I get to eat all of hers. (Actually, that's probably my singular favorite thing about her.)

Dumb question, but why don't you order your sandwiches without tomatoes if you loathe them so much? I ask because I disdain them also and will often just refuse to eat a sandwich if a tomato is on it (the seeds, yuck).

I don't think it's a dumb question. Part of it is that I feel weird making special requests on a fast food item. But mostly it's that a lot of fat food places by me (especially McDonald' and Wendy's) already get my order wrong about half the time. I don't want to make things any more confusing than they already are. I could easily see myself ordering one without tomato (especially at Wendy's) and getting a sandwich with three slices of tomato and no chicken.

When I was young I refused to eat anything on my plate if a tomato even was on the plate. Like, if I ordered a burger and it came open-faced with the lettuce and tomato sitting off to the side, I would not touch anything on the plate. (My parents remember this well and get a big kick out of reading my blog and sometimes seeing that I actually eat things that have small pieces of tomato in it.)

it may not have tasted good, but this looks like one of the best fast food chicken sandwiches you've shown us!

and this is def one of your best written blog posts in recent times!

It's interesting that FF places are pumping so much money and attention into reformatting their chicken. Wendy's is doing the same thing with this french style bakery bun, and BK, I hear, is testing similar concepts. I talked to a MCD's rep in May and he said they were trying to go to a more "homestyle" breading. I wonder if it requires different heating point/time in the fryer, and crews just have not adjusted.


Good review dude. And I don't get mayo on chicken sandwiches. People need to take a lesson from CFA. Squishy, slightly sweet bun, tangy pickles, a dab of butter, and pressure cooked chicken. Nothing else is needed.

Cafe: Thank for the compliments; I admit the bun is gorgeous but I think the rest looks only slightly better than average.

Adam: Believe it or not I haven't eaten at CFA is over 11 years. They're not that common in SoCal and none is very close to me so I just never think about driving out to one. Maybe this weekend I will!

Okay..So I just got home with my sandwich after being tempted by the same annoying commercial. At first glance, I thought it looked a little dark/overcooked. Unfortunately, this was confirmed with my first bite. This sandwich is disgusting. The "chicken"patty is anorexic, dry and tasteless. The bread was hard and dry. After being so disappointed, I had to go online and find out if anyone actually liked this sandwich. So far, I haven't seen any positive reviews. I will stick to Wendys when I feel like having a real chicken sandwich.
Nicole in FL

Definitely, Nicole. Wendy's is much better. But the weird thing is, I actually like McDonald's Southern-Style chicken and their McNuggets. I'm not sure why this particular chicken breast is so awful