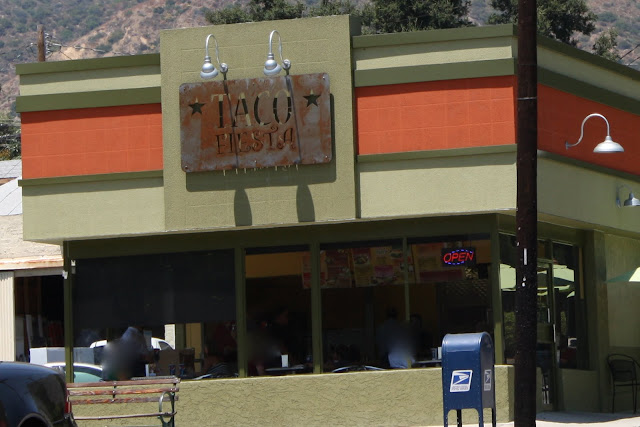 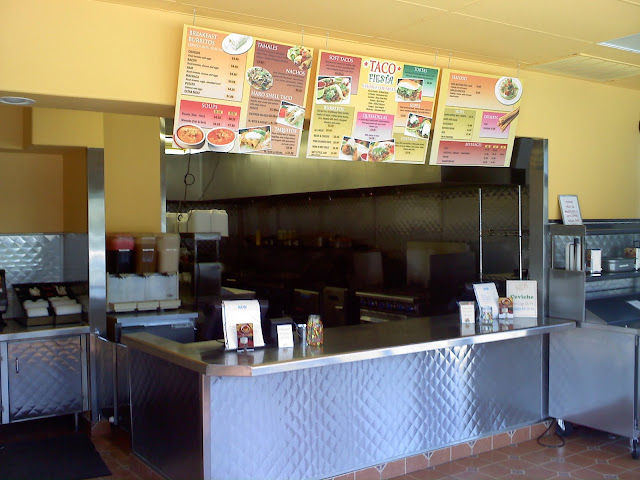 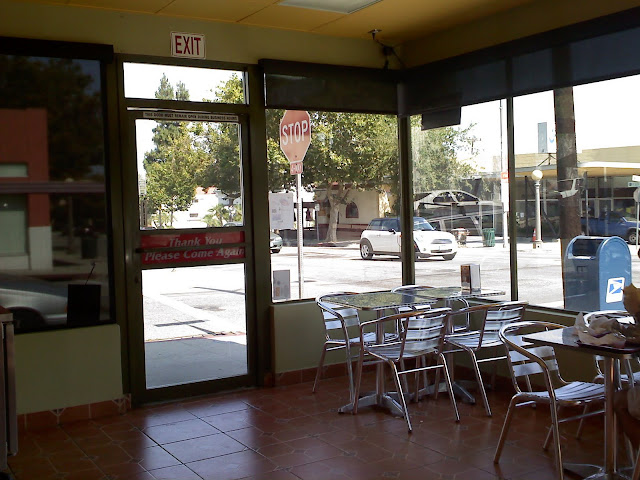 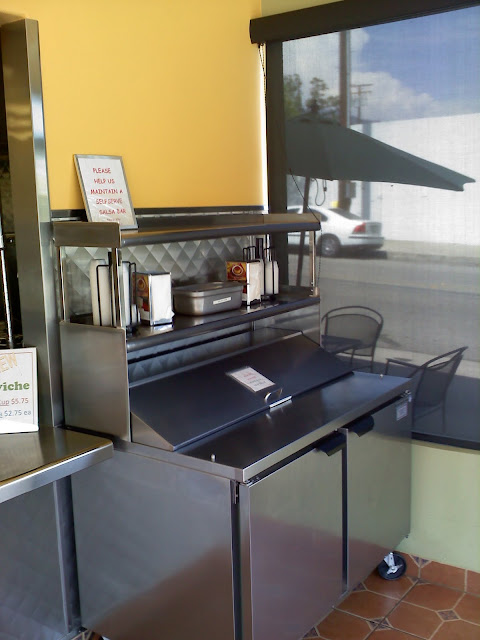 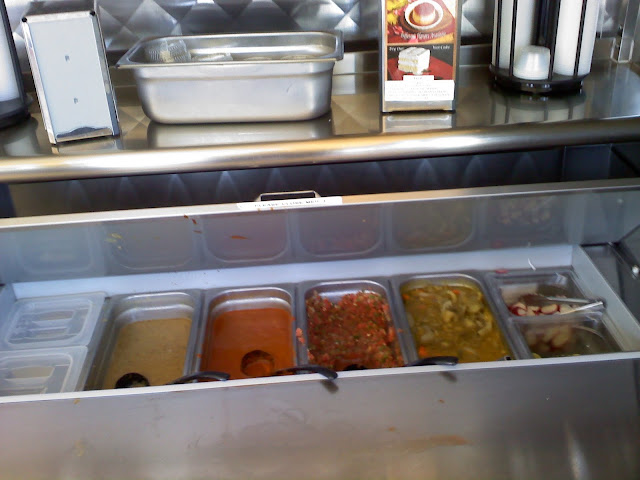 For more than 40 years, much longer than I've been alive, there was a KFC on Sierra Madre Blvd a few blocks from my parents' house. (I'm not sure exactly when it opened, but my parents moved to Sierra Madre in 1971 and it existed even then.) I went there every once in a while when I was a kid, when my beloved chicken littles still existed, and I ate far more meals there than I should have when I worked close by in my 20s.

But I was never a big fan. Even by KFC standards it was a lousy location. Still, I figured it would always be there. So I was surprised one day to drive past and see that it was gone. A few weeks later I noticed a sign in the window: "Mexican Food Coming Soon."

I'm not going to lie - I had very low expectations for the place. Even when it opened and there were lines out the door, it didn't mean much to me. Sierra Madre has supported another Mexican restaurant for almost seven years; I have eaten there four times and feel comfortable calling it the worst Mexican restaurant I have ever been to in Southern California.

But a friend of mine - whose opinion of Mexican food I value more than anyone I know - tried it a couple of months ago and told me it was very good. So I decided to give a try one day when it was convenient. Over the weekend Elizabeth and I stopped by my parents' house to do some things. We decided tacos sounded good. 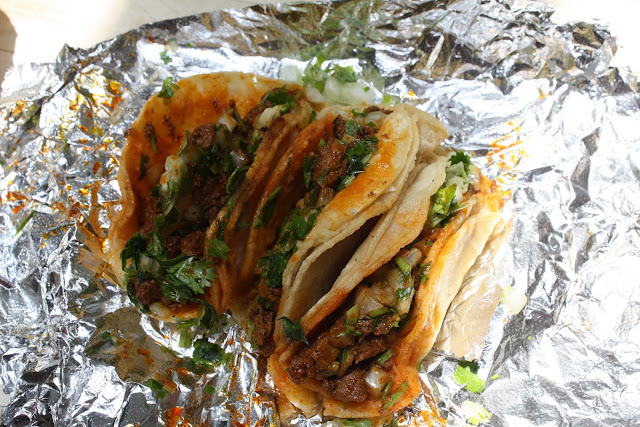 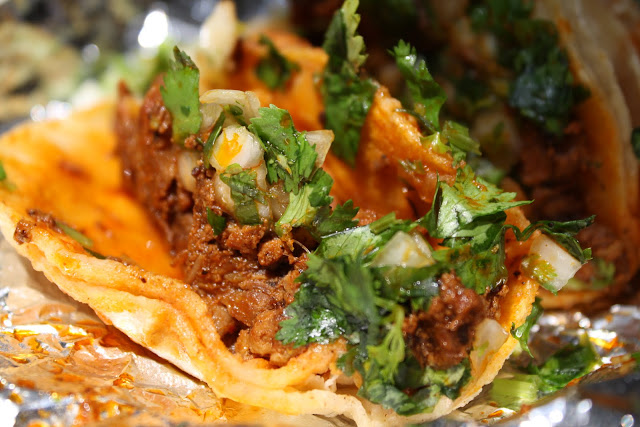 I got three al pastor tacos for myself. I was shocked at how good they were: not just good by Sierra Madre standards, good by any standards. Perhaps they were saltier than I would have preferred, but that is always a risk with al pastor. I intend to try these side-by-side with El Taquito and La Estrella (my two favorite al pastor tacos in Pasadena) at some point to see how they stack up. 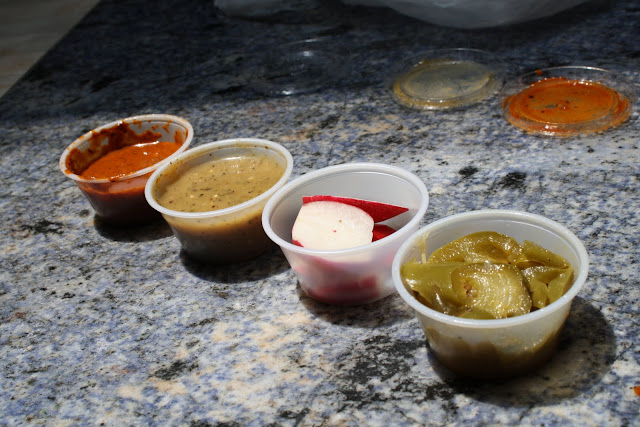 I loaded up on condiments from the salsa bar. The red salsa was fantastic, just the right amount of heat. I'm not a huge fan of salsa verdes but this one was one of the best I've had (Elizabeth loved it.) 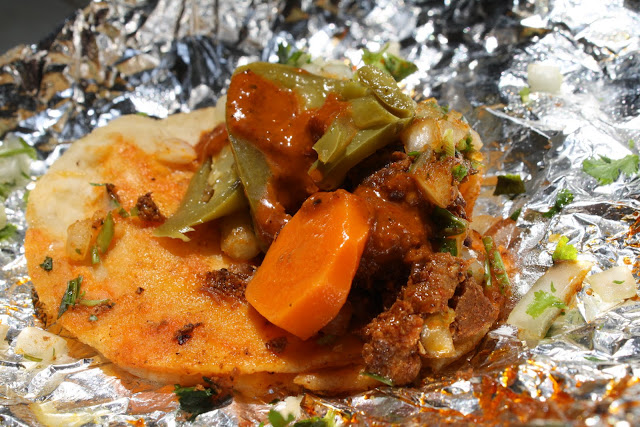 I added a few drops of the red salsa and some pickled veggies to my last al pastor taco. It was a great combination, although, to be honest, it did not add that much to it - the taco was so good by itself that it needed nothing else. 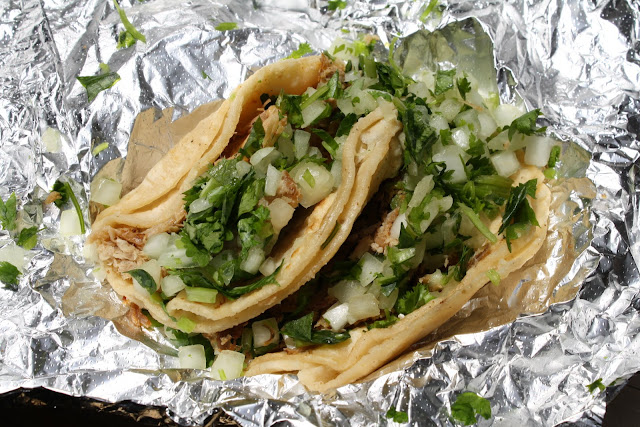 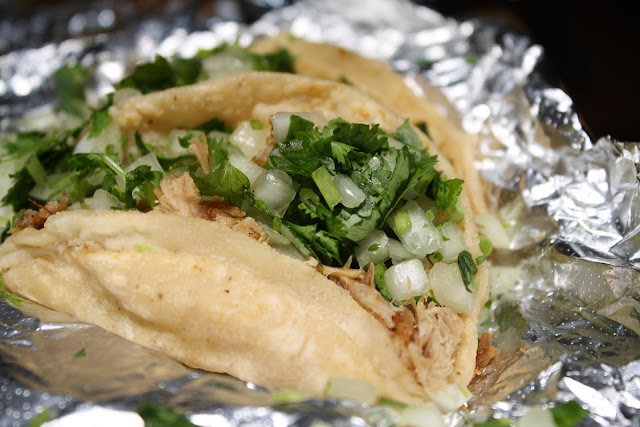 Elizabeth had her usual carnitas tacos and gave me a bite. It was good - on the dry side, and certainly not as good as my other two favorite carnitas in town (Rosarito's and El Taquito) but very tasty. I would have no problem eating several of these, although, unlike the al pastor, I would have to add salsa. 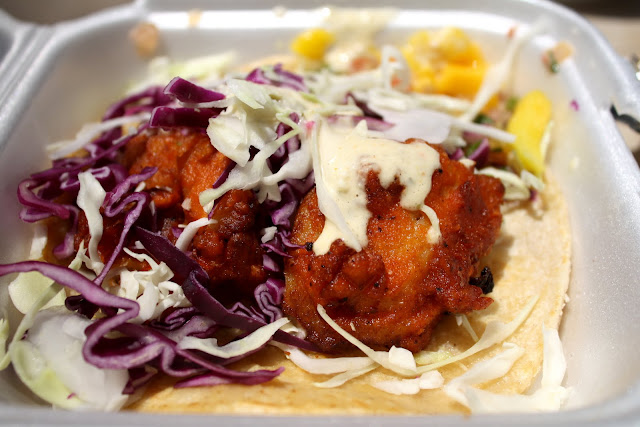 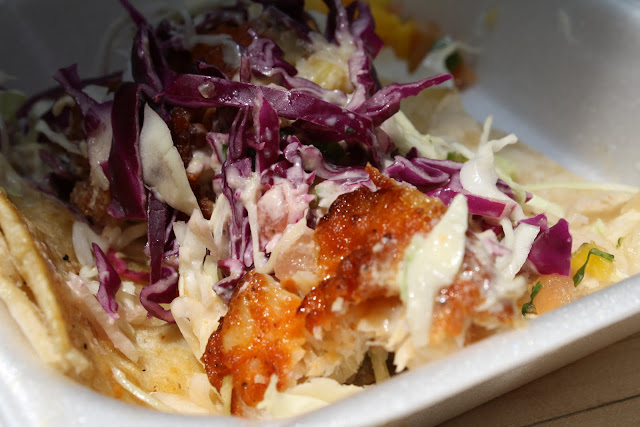 I never, ever would have imagined it... but this was one of the best fish tacos I have ever had. The batter was crispy with the perfect amount of grease: there was a bit of the hot oil glistening on the fish but by no means was this one of those grease-bomb fish tacos that make you queasy after a couple of bites. The fish itself was moist and flavorful and the tasty cabbage and white sauce were neither too much nor too little. I honestly cannot think of a way that this taco could be improved upon. When Taco Fiesta first opened three months ago the fish tacos were $2.20; I think they quickly caught on that they could charge more and they're now $2.85. It is still a great deal.

One of the best fish tacos I have ever had, and I got it in Sierra Madre. No matter how many times I write it, it still amazes me. 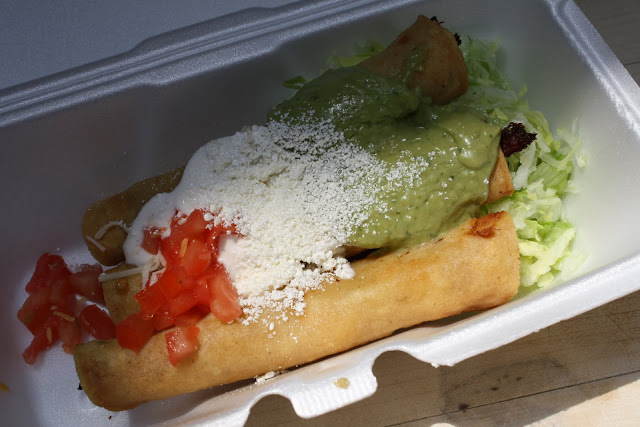 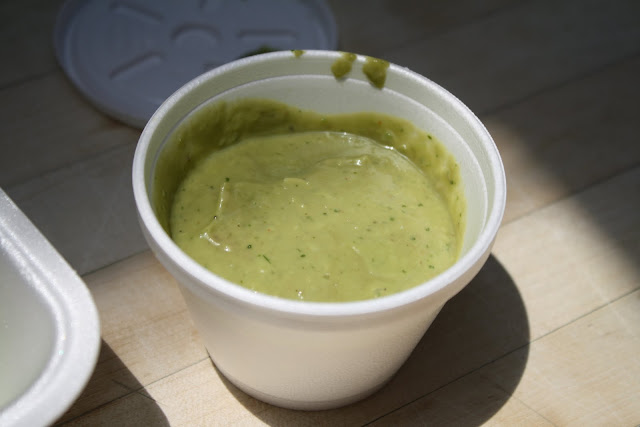 Before we went up, I asked my parents if they wanted anything. My dad did not. My mom asked for chicken taquitos and some chips and guacamole. I took a picture of her taquitos right away and intended to take a cross-section shot once she bit into one... but I was so busy enjoying my tacos that I forgot. My bad. 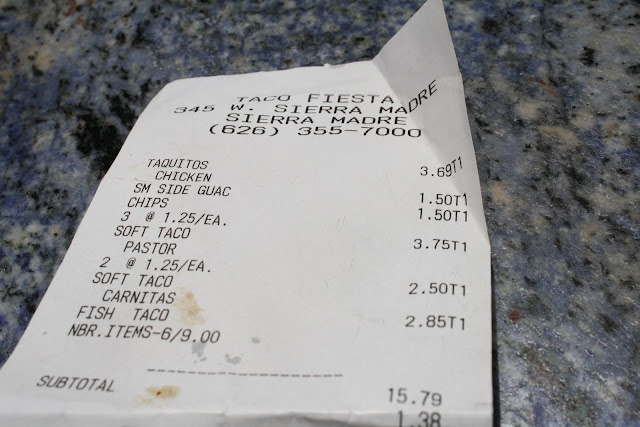 Even though they charged me $1.50 for the chips that I'd ordered, I didn't receive them. I decided that next time I - or, more likely, my parents - went to Taco Fiesta I (or they) should take the receipt and point out that we never received the chips.

"You guys will be going there within the next few days, right?" I asked my mom.

As it turned out, I would be going there within the next few hours. 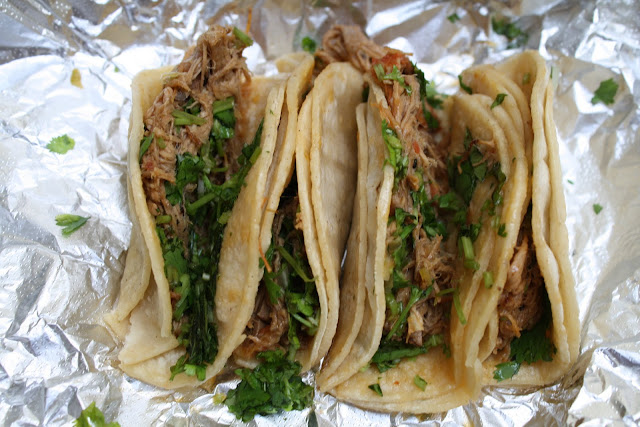 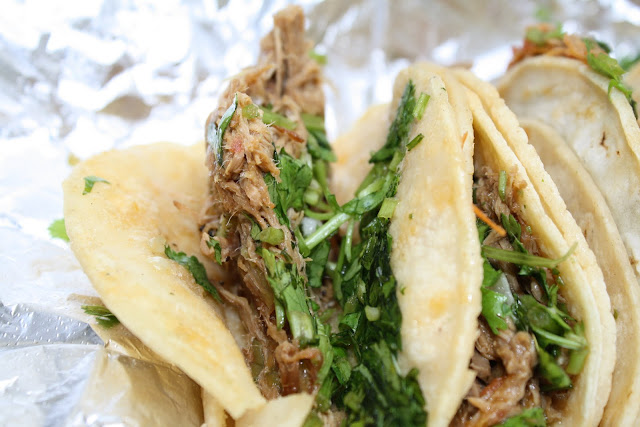 "How long ago did you ask me about Taco Fiesta?" my dad inquired later in the afternoon, with a tone in his voice that I could tell indicated hunger.
"Two and a half hours ago," I said. "Do you want some now."
He said only if someone else wanted something, but we were all full. Still, he's my dad and it's only three blocks away, so I said I would be glad to go back. He requested four machaca (shredded beef) tacos with cilantro and no onions.
I didn't get a taste of them but I was able to take a couple of photographs and they looked good. Perhaps next time I will try one... but I'm guessing my next trip to Taco Fiesta will consist of two fish tacos and maybe one al pastor if I'm still hungry. Or maybe just a third fish taco.
By the way, it was a different girl working than had been earlier in the day. I told her about not receiving my chips and started to show her the receipt but she quickly said "No problem, I'll give you some right now."
They are friendly, it is clean inside, and the food is delicious. This is different from the KFC in every way, and that is a very good thing.
Posted by JustinM at 9:43 AM

I actually ate them while riding around town in my drop-top Benz hitting switches in my black six-fo'.

What is that creamy looking green sauce with the taquitos? That looks like liquid crack!

I think it's their take on guacamole.

Once again I find myself trying to lick the computer screen.

man you got me hankering for a fish taco... they are hard to come by in the PNW. I am glad you found a hot spot and glad you got some chips.

That's interesting. I've had a lot of good seafood in Portland, I wonder why that doesn't translate to a fish taco.

You should host one of your dinner parties to make them!

Damn this makes me miss living in socal. Good mexican food is so hard to find here on the east coast. You are a lucky man.

Yes, I've been to the East Coast many times and have yet to have a great Mexican meal, however there is something to be said for being able to get a good slice of pizza all over the place. I think I would trade that for tacos.