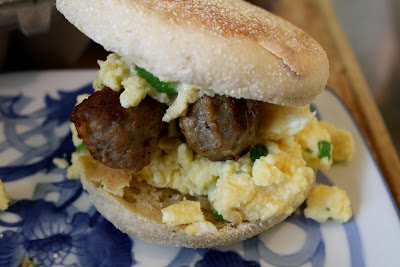 Do you ever get up in the morning and crave a particular breakfast food? It's rare for me, since I don't really enjoy breakfast, but still, every once in a while I need a breakfast sandwich. And Sunday was just such a day. I scrambled some eggs with cheese and green onion, grilled sausage, and placed it all in an English muffin. I ate a few bites like this, then added some hot sauce to the remainder of the sandwich. 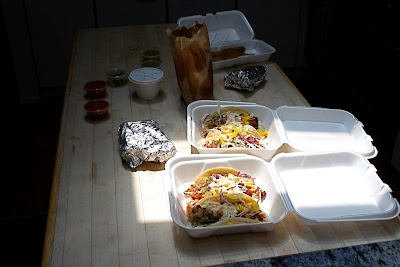 Elizabeth and I stopped by my parents house yesterday to do a couple of things, and my parents asked if we wanted to have lunch with them. We said sure.

"Have you had Taco Fiesta this past week?" I asked. "Because that sounds really good, but if you've had it recently I'll think of something else."

Elizabeth and I went up and ordered food for the four of us. 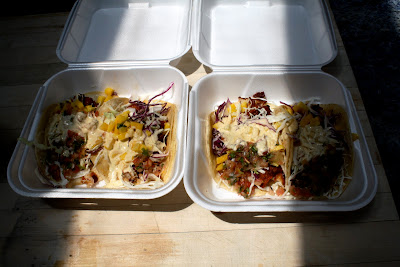 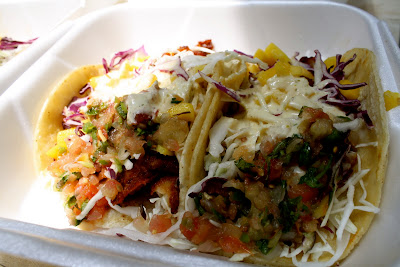 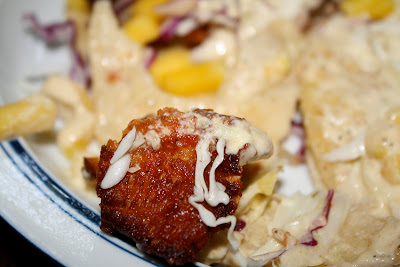 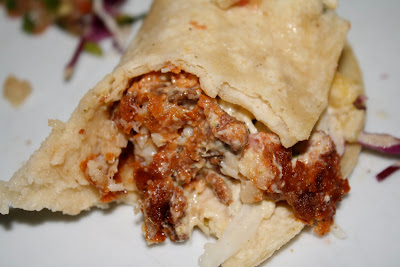 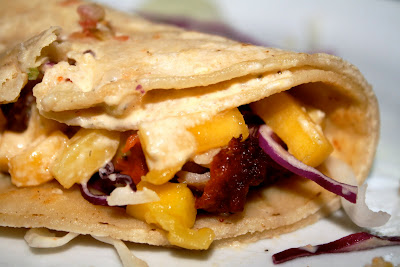 I eschewed the al pastor tacos this time around and ordered three of the fish tacos. (Actually I ordered four; my mom wanted to try one after reading my glowing review of it two weeks ago.)

They were again fantastic: fried perfectly, with a slightly-tangy white sauce, cabbage, and mango and pico de gallo salsas. I was very hungry and I ate all three of mine, but I can tell that normally two will be enough. 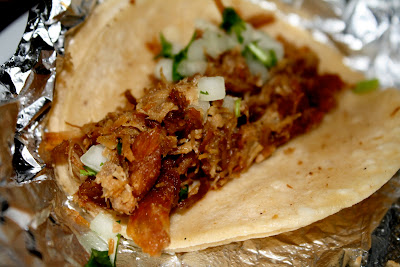 Elizabeth had her usual three carnitas tacos, and again she really liked them. 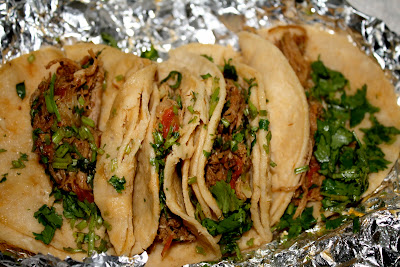 My dad had his usual order as well: four machaca tacos con cilantro, sin cebollas. He enjoyed them, just as he did the day before. 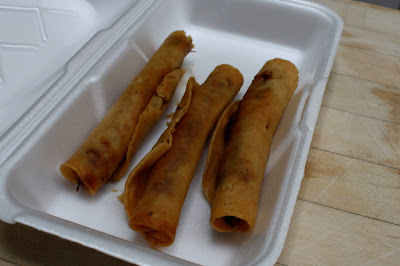 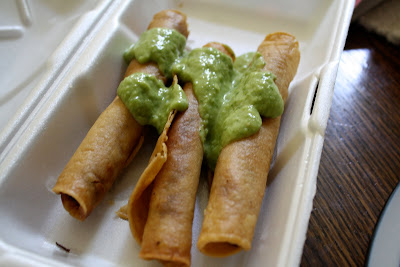 My mom wanted three taquitos. There is an option to order taquitos with rice and beans for $1.69 more, but she didn't want that, so I had ordered it a la carte. The girl behind the counter thought I meant without sour cream or guacamole, which the taquitos normally come with. My bad, I guess. At least I'd ordered a side of guacamole and chips for everyone, so she was able to add a touch of that.

It was another great meal from Taco Fiesta. They are now three-for-three with me. 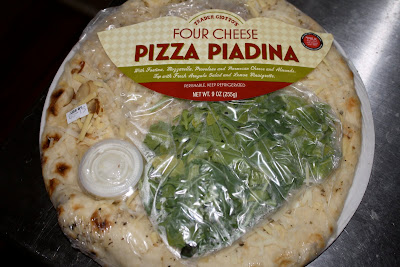 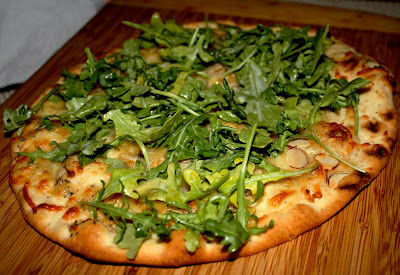 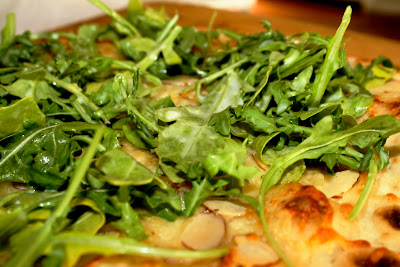 We weren't terribly hungry at dinnertime - one of the consequences of eating a large lunch, I guess - so we decided a Trader Joe's pizza would be enough. One of Elizabeth's favorites is the Pizza Piadina: four kinds of cheese (mozzarella, fontina, Provolone and Parmesan), slivered almonds, and an arugula salad with lemon vinaigrette.

This isn't my favorite TJ's pizza, but it is still quite good and I had no problem eating a few slices.

I thought about going out and getting a couple of donuts for dessert, but I decided I had already eaten enough for the day.
Posted by JustinM at 10:23 AM

so you bake the pizza then do the arugula on top? do you wait for it to cool?

I like the arugula cooked on the pizza, wilting it slightly, and then just pouring the dressing on. (Certain other smug bloggers will say this is a mistake but that's how I like it.)

But Elizabeth likes the whole salad-on-top-of-the-pizza thing, and since this is perhaps her favorite TJ's pizza, I am happy to do it that way. I do not wait for it to cool.

some good stick your ribs dinning this weekend! But...where was the booze?

I only had beer on Friday night. Saturday and Sunday were relaxing, TV watching, booze-free nights.

I LOVE the pizza piadina! So good.