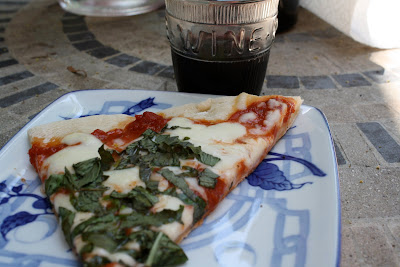 My friends Nick and Gwen were down this way from Northern California for the weekend, so they made it a point to stop by our place for lunch. I cooked two pizzas on the grill and we drank wine on the patio. It was, obviously, a nice lunch. 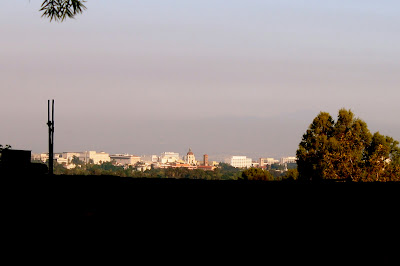 Tracie's good friend, Chrissie, was in town, too (she lives in Florence with her husband and three year-old daughter) and she invited us to a barbecue at her grandfather's house up above the Rose Bowl. The view of downtown Pasadena was not the worst one I've ever seen.

(If you are a fan of Pawn Stars - and at this point I would more accurately describe myself as an "addict" - you would find his house simply amazing. Most museums have less impressive collections of antiques and old musical instruments.) 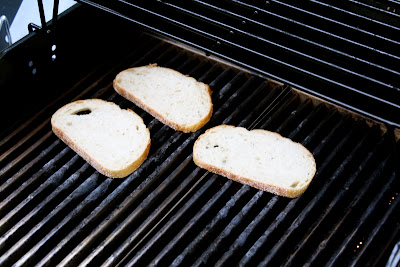 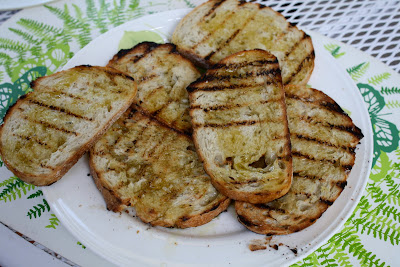 Lorenzo was grilling garlic bread when I arrived. I will be brief: it was the best I've ever had. 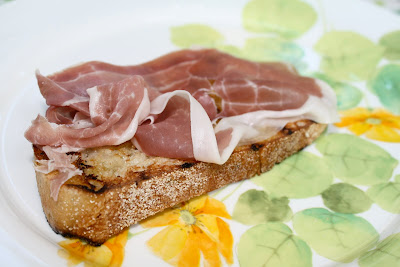 Someone suggested I try it topped with prosciutto, which I did. This is one of those combinations so delicious that you scratch your head and think Hmm, why haven't I been eating this for years? 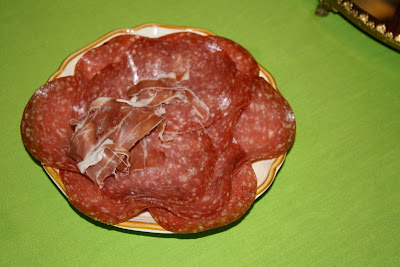 Salami was good, too, but then again I've loved that my whole life. 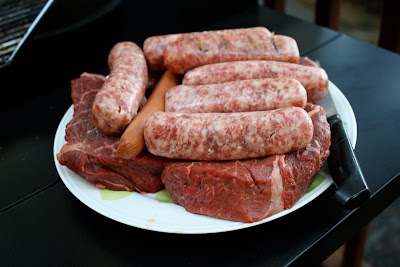 There was a big plate of meat, which always makes me happy. 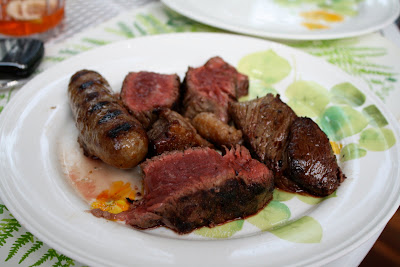 The meat was certainly more rare than I like, but I ate some anyway and it was very tasty. "Aren't you worried that will make you sick?" Tracie's sister, Trina, asked me. 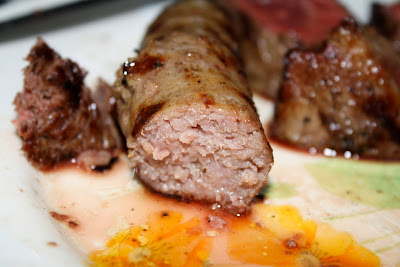 But I did eat more sausage than beef. It was outstanding. 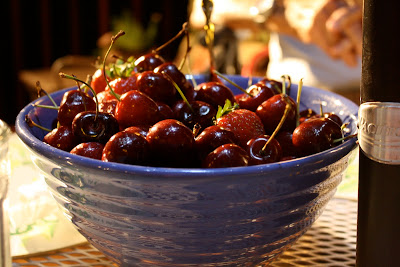 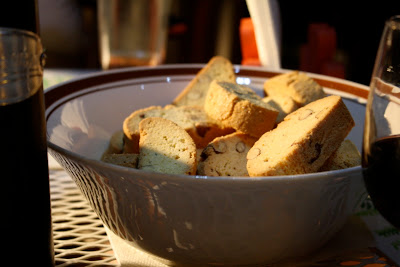 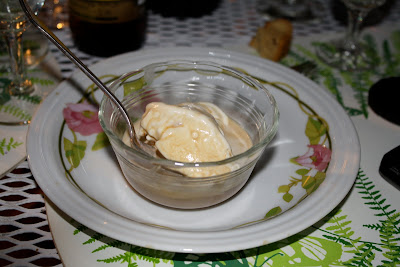 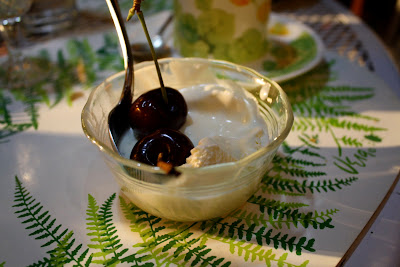 It's extremely rare that I eat dessert, and I did not on this occasion, but I took pictures of everything, including the ice cream that the toddler put cherries in because she thought it would look prettier. 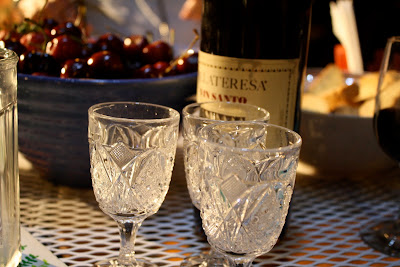 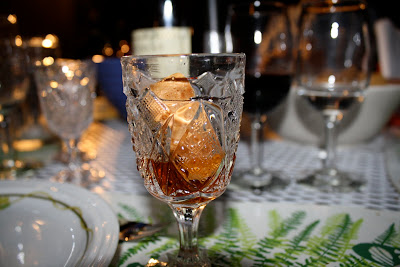 I have never enjoyed dessert wines but Trina said I should try some Vin Santo with a piece of biscotti. I hated it. (Although, I have to admit, fifteen minutes later I was told to try it again, that the wine should have opened up by then. It was much better the second time.) 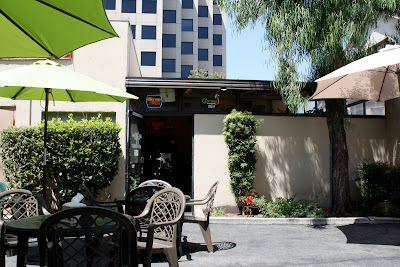 Elizabeth and I were discussing what to do for lunch on Sunday, including some places we'd never been. But it was looking like a really nice day - sunny and warm, but not too hot - and I said "We could just sit on the patio at Wolfe Burgers..." That sounded good to both of us. 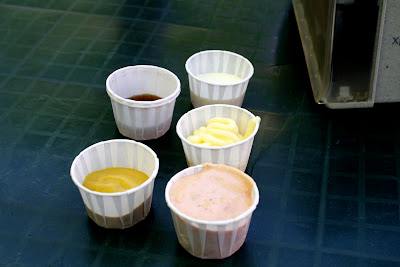 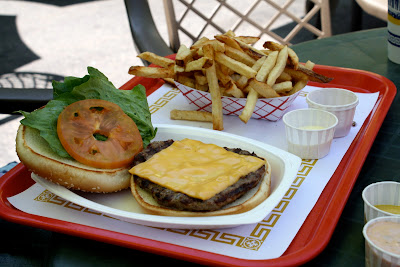 Elizabeth got her usual order: a Wolfe Burger with American cheese. 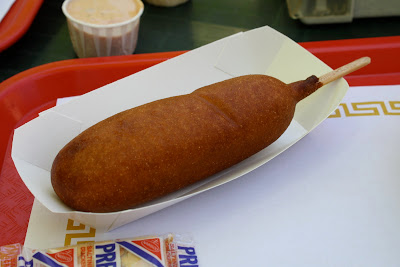 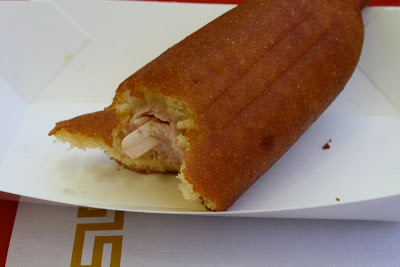 I can't explain why, but I was craving a corn dog. It was disappointing: the batter was okay but the wiener was still slightly cool and pale-flesh-colored. Whatever, it's just a corn dog. 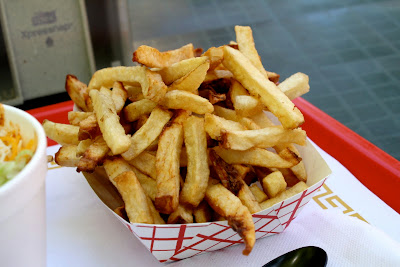 Sometimes - more often than not these days, actually - Wolfe Burgers fries disappoint; they are frequently undercooked and flabby. But when they are done correctly, they are spectacular. And these were done correctly. They were very hot and crispy, like great Belgian fries. I do not remember the last time I finished and entire order of Wolfe Burgers fries, I usually take home about half and reheat them in the oven later. On this occasion they were so tasty that I ate them all. 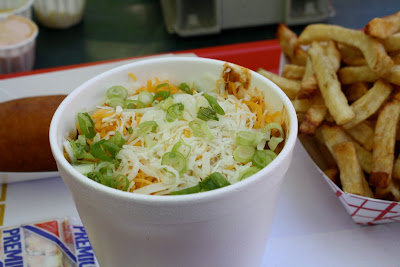 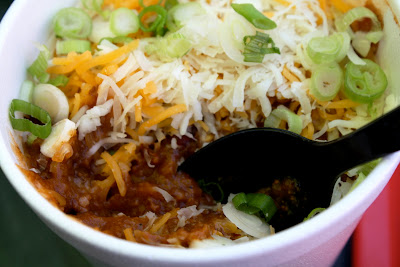 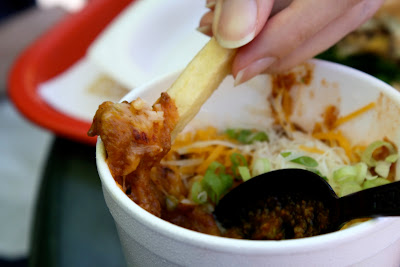 Wolfe Burgers also has one of my favorite chilis in Pasadena, and yesterday we decided to share a bowl. We ordered the "spicy" version (basically just chili with pepper flakes added; it's not really very spicy) and topped with cheese and green onion. It was great, as usual, and the two of us only finished half of it, taking the rest home.

Which I'm now going to go eat for breakfast.
Posted by JustinM at 10:30 AM

"The view of downtown Pasadena was not the worst one I've ever seen."

pp, i dont get this line. are u being sarcastic? or is it a sly reference to a book or movie? sorry if im killing the joke.

It is literal. That is not the worst view of downtown Pasadena that I have ever seen.

I will totally trade you meat for dessert any day. But the proscutto bruschetta does sound redunk.