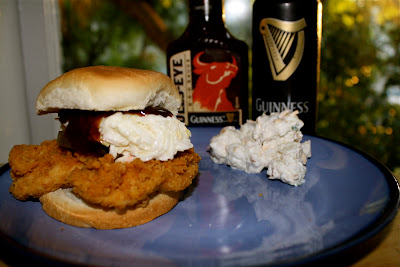 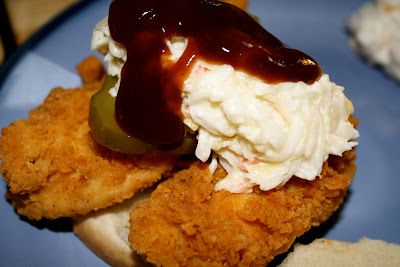 I've mentioned before that my Friday nights aren't quite as crazy as they used to be, and last night took that to the extreme: I spent more time than I wanted to in Sephora with Elizabeth. In other words, at least thirty seconds. (If you want to know why - not to mention if you would like to win a $50 gift card to Sephora - then check out Elizabeth's blog.)

After we were done, she said she would get me whatever I wanted for dinner. I considered a few options but then it occurred to me what I really wanted: to go home and watch baseball with a sandwich and a cold beer in front of me. So we went by the store.

I've written this before: the chicken strips from the Vons deli counter - although often they're more like whole breasts of chicken than mere "strips" - are some of the best around, as long as they're hot out of the fryer. (The risk, however, is that when they have been sitting around for hours they are high-school-cafeteria quality.)

Containers of salads were on sale for $1.99 each, provided you bought two or more, so we got three: mustard potato salad, "baked potato salad" (like a potato salad with cheese, bacon and sour cream), and cole slaw. Plus I bought a bottle of Guinness-flavored Bull's Eye barbecue sauce.

Back at home I placed some of the fried chicken on a hamburger bun, topped it with pickles and cole slaw, and poured some of the sauce over it. I opened a can of Guinness, sat down and watched the Angels beat the Orioles. I doubt there is any place I could have gone for dinner last night that would have been as enjoyable and relaxing.
Posted by JustinM at 10:56 AM

Yumm... If you get lost and end up in Bakersfield, stop by MOO Creamery. They have Guiness Beer and Guiness Ice Cream, which makes for an awesome Guiness Float!!!

Thanks for the tip. I used to stop by Bakersfield a few times a year but I have not been in years. But next time...