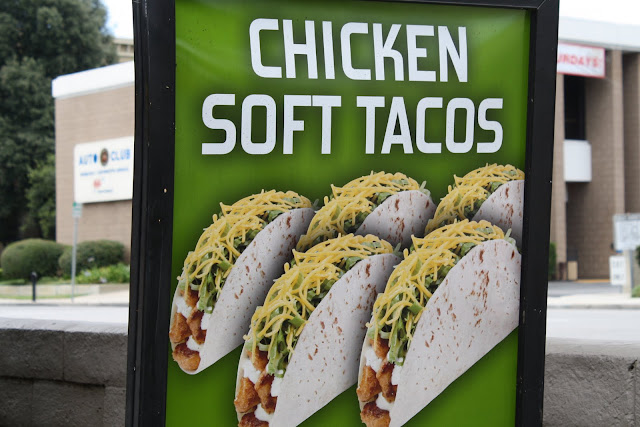 There are some fast food items that you might guess, from the frequency of their appearance on this blog, that I love. But it's usually not the case, even if I do unintentionally give that impression.

Yes, if I can somehow convince McDonald's to bring back Shanghai McNuggets it will stand as one of the greatest moments of my life. But the truth is that I think McNuggets are merely average; with chicken breasts and 50 cents worth of ingredients I can make something in my oven that I consider superior.

Wendy's spicy chicken nuggets are delicious and a great value but their disappearance would not cause me to shed any tears. Popeyes popcorn shrimp, Wienerschnitzel's mini corn dogs, White Castle sliders... I like 'em all. But if I could handle the loss of Jack in the Box's toasted raviolis half my life ago, I could handle losing any of those items.

When I think about it - and I just thought about it for much longer than is probably healthy - there are only three fast food items whose disappearance would really bum me out: In-N-Out's Double-Double, Church's boneless wings, and Del Taco's chicken soft tacos.

The last of those have never appeared on this blog in their original form, and that blows my mind, because I do love them. Even though I don't actually think they're all that good. The tortillas are average (although by fast food tortilla standards, "average" is about as good as it gets), the chicken is slightly rubbery, and there is a "secret sauce" covering the insides that mostly tastes like a runny mayonnaise. But the combination of all these ingredients provides me pleasure every time. The whole is not only greater than the sum of its parts, it's greater than I know it should be. I don't want to love these, but then again we don't get to choose these things.

Friends of mine, with whom I grew up in Pasadena and have now moved throughout the country to places without In-N-Out, have mentioned how much they would give to have one close by. And I can understand their longing, but to be honest I would miss Del Taco much more.

I once drove from Auburn, California to Rock Springs, Wyoming in a single day. (800 miles on the dot, in case you're wondering.) Just outside of Reno I passed a Del Taco at about noon. Damn, chicken soft tacos sound good, I thought to myself. But there were two 18-wheelers and I couldn't get over. I'll just wait for the next Del Taco. But there wasn't one. Hours later I broke down and stopped to eat in Utah. That night in Wyoming I was still craving those chicken soft tacos.

Leftover chicken soft tacos are even better the next day and are one of the few things that I actually don't mind heating in the microwave, though I must add that they need to be refrigerated overnight. There is a story there but let's not go into it.

Well, what the hell, I'm amongst friends. Let's go into it.

My friend Tom and I once spent more than twelve hours at a pub ("Soccer Jersey Day," we called it, he wearing his French national kit and I in my Liverpool FC long-sleeved jersey... the things you do when you're 23) and had a cab take us home that night, for obvious reasons. But first we bribed the cabbie to take us by Del Taco. In my memory we ordered 20 chicken soft tacos, but that can't be right. (Well, yeah... it can.) In the morning when we woke up there were still at least a dozen of those beautiful tacos hardening on the coffee table. We let them go.

And many more occasions over the years when the chicken soft tacos have hit the spot. When Elizabeth and I can't decide what to do for dinner and we're both too lazy to cook, a suggestion of Del Taco has never once been met with a no.

When Del Taco releases one of these tacos dressed-up with a different sauce than the secret sauce, as in the case of the Santa Fe chicken soft taco or the Spicy Chicken Mole soft taco, they are much better than normal. So that gave me an idea: why not order a few chicken soft tacos without sauce and add my own? See if I can come up with anything as good as those Del Taco promotions? 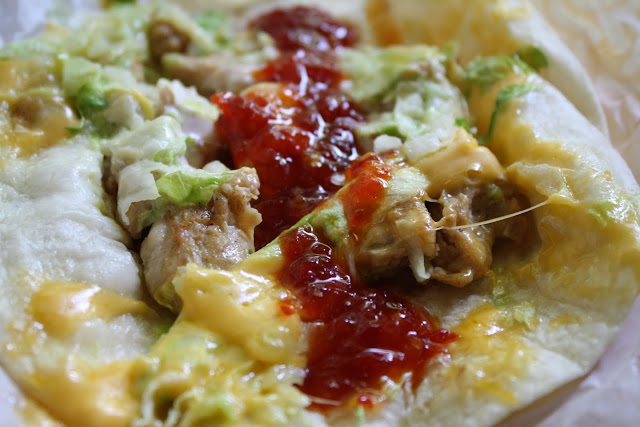 I'm down to the last of the jalapeno sauce that my friend Carla bought me at the farmers market last month, so I decided to give it a try on the taco. It wasn't a good combination: the jam-like sauce, which complements burgers and chicken breasts so well - usually with a dollop of goat cheese - didn't add anything but sweetness to the taco, which is already devoid of spice. 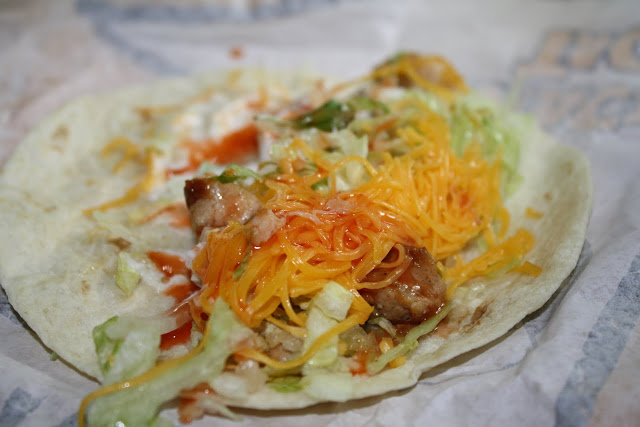 Texas Champagne, the runner-up out of 15 in my hot sauce adventure last month, was a much better fit. The cayenne peppers and vinegar provided a wonderful boost, merging beautifully with the chicken. 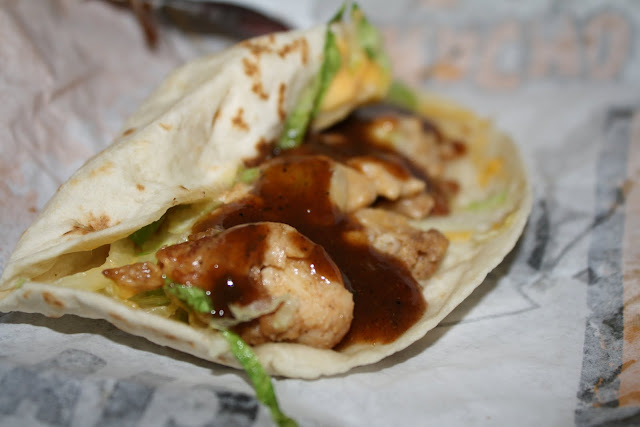 Valentina was similarly delicious, the spicy vinegar blast cutting through the inherent sweetness of the taco. I didn't like it as much as the Texas Champagne, but then again I don't like Valentina as much, so that's no surprise. But if it were all I had I would not complain one bit. 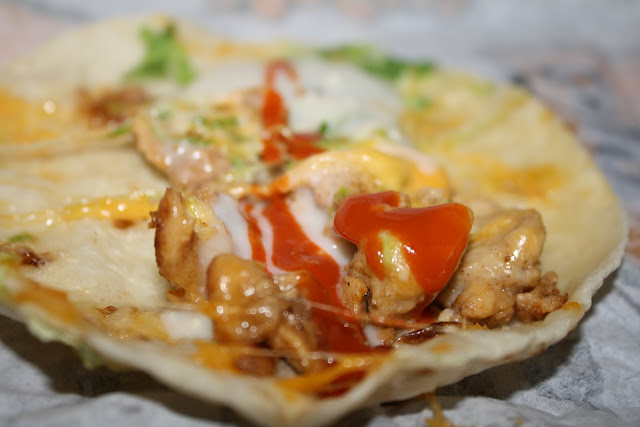 Do you ever sometimes get an idea for making something and then try it and say "Now, why did I think that would work?" Well, I thought if I added a touch of blue cheese dressing and some Tabasco Buffalo sauce, the taco would taste like a Buffalo wing in a tortilla. Let's just say it didn't work. Whatever. In great attempts it is glorious even to fail. 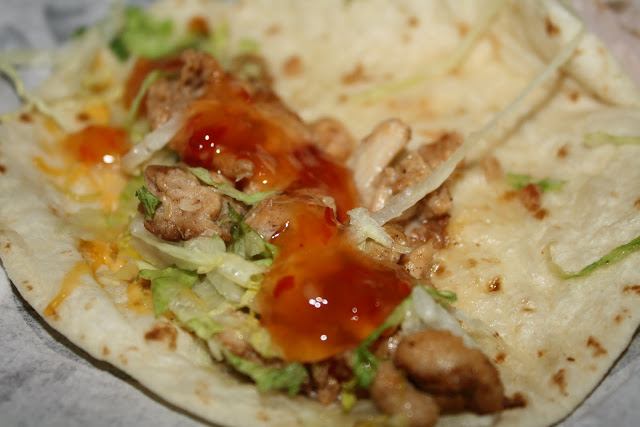 In a somewhat less glorious attempt, I added Frank's RedHot "Sweet Chili Sauce." I didn't necessairly think this was going to be great, it's just that I had the remnants of a bottle in the fridge, something I'd added to Trader Joe's tempura chicken a few days earlier, and this seemed like a good way to finish off the bottle. It wasn't bad by any means, but, like the jalapeno sauce, it was just too sweet to make the whole thing work. 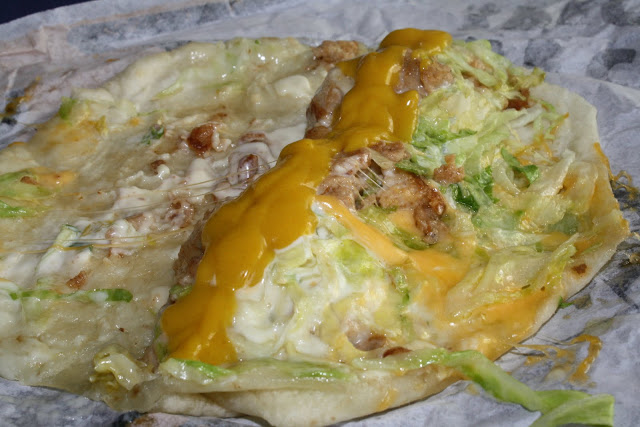 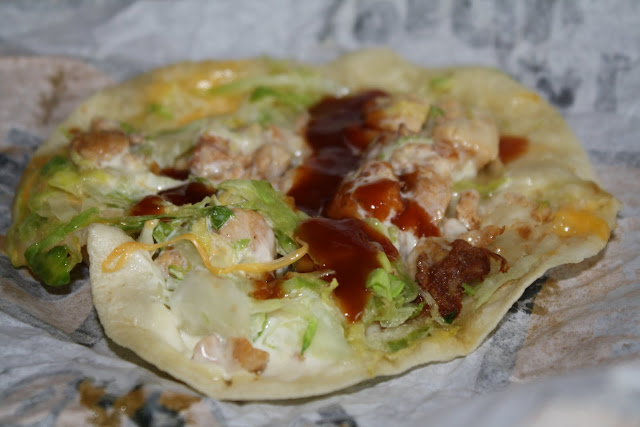 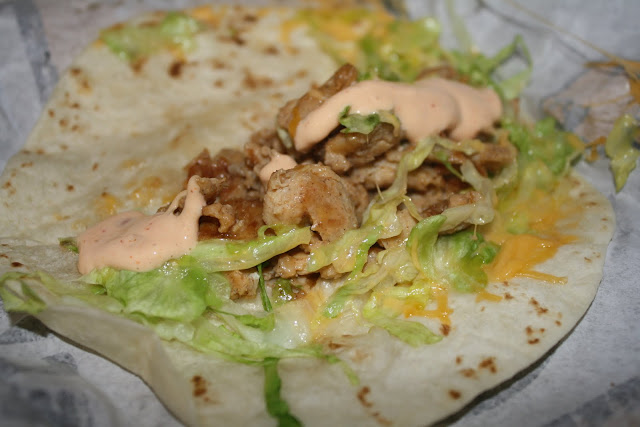 I asked at Del Taco if they had any of the "Baja sauce," the tasty, slightly-spicy sauce that they offered a few months ago with their excellent shrimp tacos. The girl at the drive-though told me yes and gave me a small container. It tasted very similar to the "secret sauce" that I was trying to avoid on these tacos. It didn't have a lot of flavor. Ordinarily I would have added a few drops of hot sauce as well, but I decided to eat it as is. It wasn't bad, but it didn't have any of the kick I enjoy in these tacos. 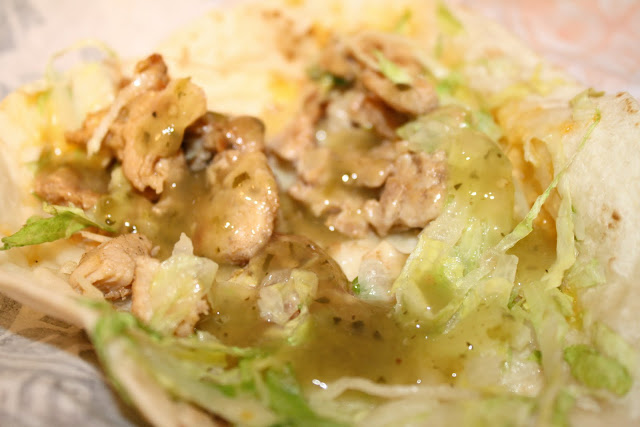 Finally, I squeezed a packet of Taco Bell's salsa verde onto one of the chicken soft tacos. Like several of the tacos here, this just wasn't hot enough. It was a really good flavor combination, but it was lacking the necessary heat.

So, in what I probably could have predicted at the outset, the two hot sauces that I love turned out to be the best complements to the tacos. Funny, I mentioned earlier that Del Taco's chicken soft tacos have never appeared on this blog in their original form. They still haven't.

I probably won't be in the mood for any more of these for a long time. At least a couple of days.
Posted by JustinM at 10:47 AM

I really hope you ate all 9 in the same sitting. Epic. Another great post! And wow, that hot mustard taco looks TERRIBLE. Something red needs to be on a taco I think.

Fantastic! The mustard does look awful. But the jalapeno actually looks delish.

I have not had these in years, thank you for the fantastic reminder. Your post made me think of EXCELLENT store bought tortillas that friends turned me onto over the 4th of July weekend. In the unlikely event that you are not aware of them, here is a link: http://www.latortillafactory.com/products-8.aspx They mimic the homemade tortillas I used to make. In my opinion, they are not slightly better than ordinary store bought tortillas, but better by a factor of at least 2X. I found the white corn to be superior to the yellow corn. They are available at Vons.

Speaking of tacos, I bet you already know about this website, but in case you don't, check out the Great Taco Hunt... http://www.greattacohunt.com/

I love the thick worcestershire sauce too! It really makes marinating steaks SO easy. Also, I pinterested your chili fries pic from yesterday. It was a thing of beauty.

I have been reading the Great Taco Hunt for more than five years. It's great.

Michelle: Well, it was good, it just didn't work with the taco like I'd hoped it would.

Stephen: I am not sure if I've tried them - I don't think so, and I will make sure to do so.

Fritos: I just Googled "pinterested." I had no idea what it was. You crazy kids and your new websites.

The del taco locations in Barstow are absolutely the best locations to visit. The food is much better and the chicken soft taco's are huge!!

Pinterest is crack. Maybe a bit too much of the girly type of crack for you though.

Matt: I've heard rumors of those Del Tacos but never been. Maybe one of these days I will take a road trip to Barstow.

I've totally eaten at the Del Taco in Reno. Northern California Del Tacos are few in far between. I think there is one in Davis and that's about it.

In fact most Bay Area people are not that aware of Del Taco. I remember it from when I lived in Orange County as a kid. So of course we had to stop when we saw one in Reno after not eating at a Del Taco for 20 years. It wasn't as good as I remember. Maybe it was the fries and a taco thing whats that about? I don't remember 80s era Del tacos having fries.

The Pasadena locations certainly did. I remember being at one when I was about 5 years old in the mid-80s and a woman asked my grandmother if she would buy her some fries. My grandmother was a very generous woman and said "Sure." The woman got her fries, walked right by us and left, never once saying thank you. It was a good lesson in what assholes some people can be.

This post makes me sad, because they just closed the only two Del Tacos here in St. Louis. :( It created quite a stir because one was in a historic '60s former gas station shaped like a UFO (google UFO Del Taco for info and pics).

I just watched the video. That makes me kind of sad, too. But there are a lot of people who won't be happy until every retail space is a cookie-cutter strip mall. There is a certain kind of beauty in ugliness, no matter how contradictory that sounds, and that Del Taco was pretty ugly. But it was unique.

Like I have mentioned before, I love the last lines of Bill Bryson's The Life and Times of the Thunderbolt Kid:

"Imagine having a city full of things that no other city had."

I would not miss for a nanosecond the disappearance of DT soft chicken "tacos."