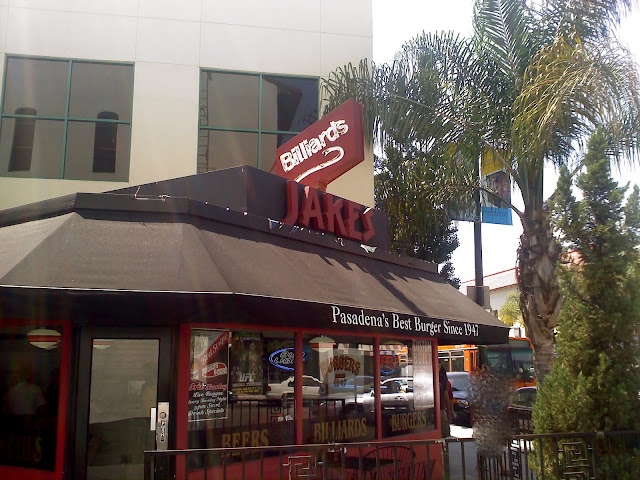 I wrote about Jake's last fall, about how I used to frequent the place for various reasons, from burgers during the teenage years to bar crawls in the early 20s and Sunday-morning NFL games in the late-20s. I rarely go there anymore. In fact, my last three trips there have all been for one reason: because my friend Dave likes their burgers. (I don't dislike them, but I don't think they're anything special.)

The other day, Dave sent me a text asking if I wanted to go to lunch with him and I said sure.

"Is Jake's okay with you?" he asked. "I know you don't really like the place."

It's not that I don't like the place, I replied, it's just that I don't understand why you like the place so much. Remember the comedy of errors the last two times we went?" (The second-to-last time we ate there, it had taken quite a long time to get our burgers, though at least we got them; our last time there, the waiter lost our ticket completely and it took him more than half an hour to realize it.)

"Oh yeah," Dave laughed. "Hopefully it won't be like that again." 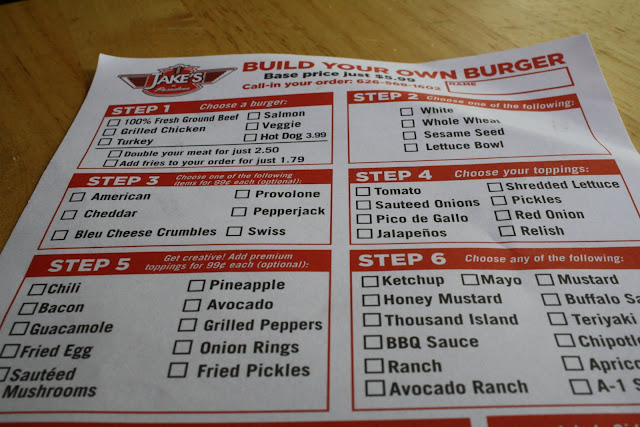 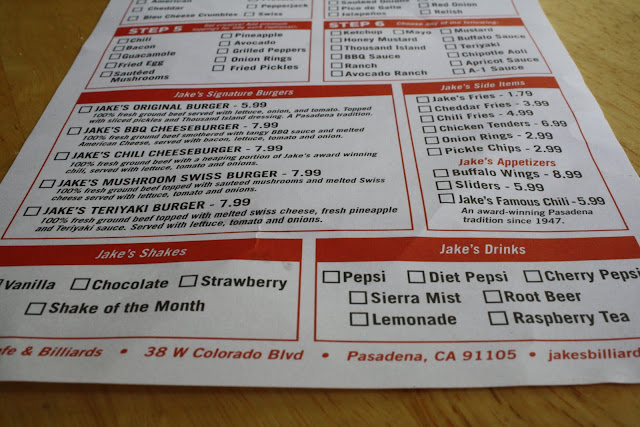 We took seats at the counter, checked off the boxes on the paper menu to customize our burgers, and watched the guys work the grill. 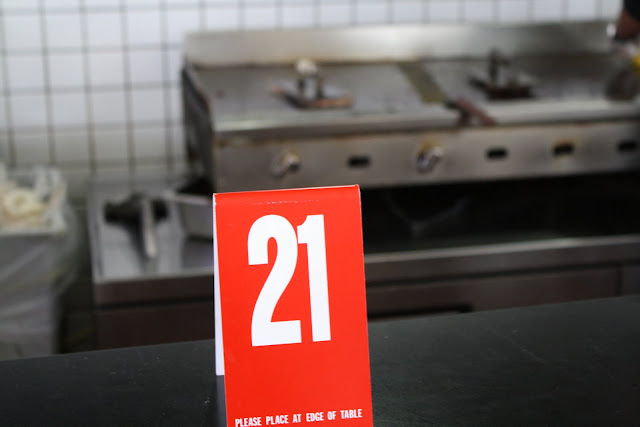 21 was my number when I played ARC spring basketball in high school, it was my 21st birthday when I first had a beer at Jake's, and it was also the title of one of the worst movies I have ever seen. And it was our number at lunch. None of these things are particularly interesting, I'm just sharing them with you.

After fifteen minutes the waitress grabbed two baskets of burgers that the cooks had finished cooking and walked over to us. One of them was topped with a fried egg, which neither of us had ordered.

"Which one of you has the egg?" she asked.

"Oh that's just like me to do," she said. "Do you still want the fried pickles?"

"Do you want the fried egg as well?"

I looked at Dave as she walked away carrying my basket. He gave me a knowing smile as if to say Okay, next time we go to lunch we can go somewhere else.

It only took about five minutes to get my burger correct, and the waitress did seem genuinely sorry about her mistake, so all is forgiven. And to be completely honest, this isn't a Green Street Tavern burger, it's just regular supermarket-quality ground beef; having it sit on the counter for five minutes while they fried the pickles wasn't going to make that much of a difference. 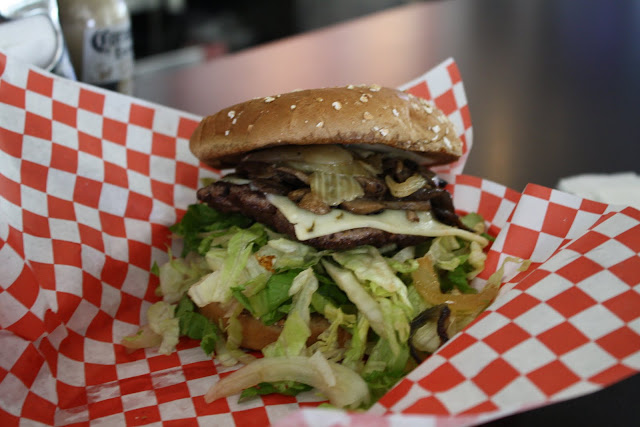 Dave got his burger with pepper jack cheese, sauteed onions and mushrooms. He enjoyed it very much, as always. 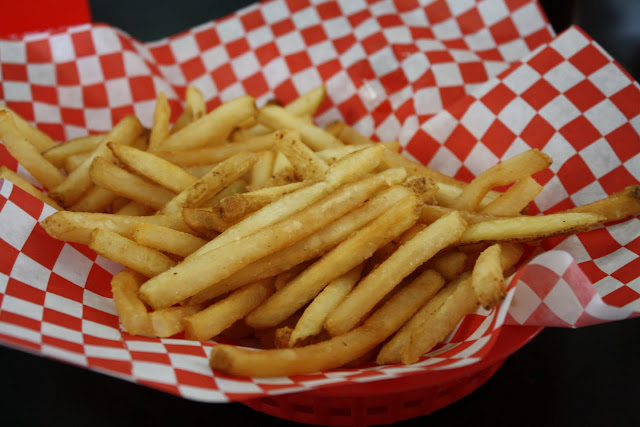 Dave also got an order of fries and told me to help myself. I'm not a big fan of Jake's fries - they are the same previously-frozen fries that you will find at any bowling alley cafe - but I was pretty hungry and had quite a few fries while my burger was being made properly. 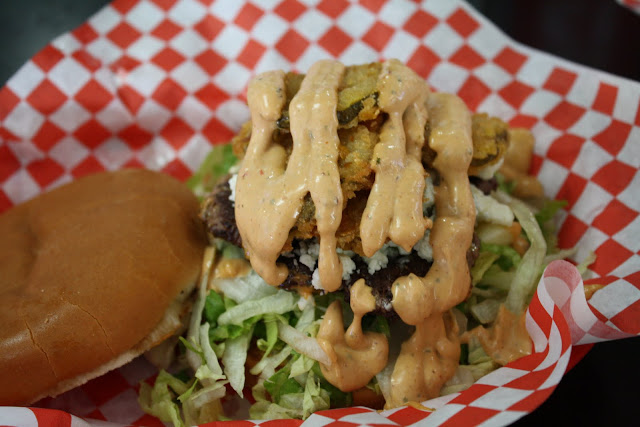 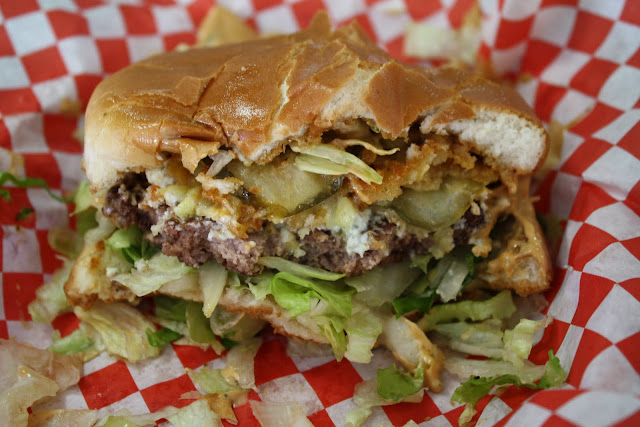 The fried pickles were a wonderful addition to the burger. (If you read my post two weeks ago about my history with pickles, you may remember that Jake's is the place where I started to love them, though they were not fried.) The chipotle aioli was good but overwhelming. It went far better with the fries than the burger. I also had blue cheese on the burger - not really necessary, but I figured since I was going with big flavors here, I might as well go all the way.

I can't really say that I like Jake's, but it seems too harsh for me to say that I don't like it. It's obviously popular - I've never been there for lunch when it hasn't been packed - and if it stands as a bulwark against the complete malling of Old Town, then I hope it lasts forever. It's certainly a nice visual break on a block featuring Cheesecake Factory, H&M and American Apparel. But their burgers are nothing more than just okay to me. With Fatburger and Firefly both two miles away, Hutch's ten blocks away, and that burger at Green Street Tavern just 200 yards away, I just don't see any need for Jake's in my life.
Posted by JustinM at 11:29 AM

i had to google bulwark. and how do you know gst is only 200 yards away?

Is that a serious question? I figured out the distance the same way you figured out bulwark.

ah ok. for some reason i conjured up the picture of you walking with a tape measure.

Fair enough. I'm dorky enough to do that, or even wear a pedometer.