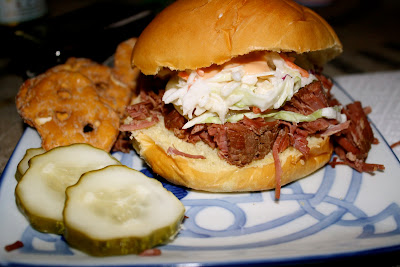 Elizabeth had to go out to one of her work events last night - at the Village Idiot, where last year I had my favorite fish & chips I've ever eaten in Los Angeles. I was a little jealous. So I decided to make something really good for dinner. I couple of days earlier I had developed a strong craving for a brisket sandwich. At Ralph's, however, they only had one little plain brisket left. So I decided to get a corned beef brisket instead (they had a four-pounder). 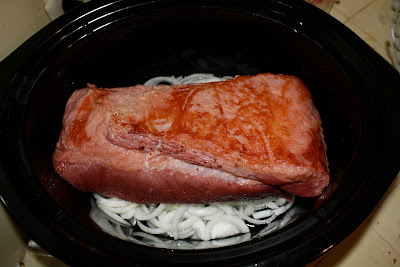 At 8 o'clock in the morning I seared the brisket on both sides and put it in the slow-cooker on a bed of onions with a bottle of beer. I set the cooker to low, closed the lid, and waited for the smells to begin. Normally I take a couple of sips out of any bottle of beer I'm using while cooking, but it's been years since I've had a beer at 8 in the morning (well, okay, days at least) and I wasn't in the mood.

I sent my friend Carla an email asking if she wanted to join me for dinner. She said yes and revealed that she had never actually had corned beef before. (This surprised me, but my other two dinner companions were Tim and Tracie; the former said he didn't think he'd had it since he was a kid and the latter said she wasn't sure if she'd ever had it before. So I guess corned beef isn't as common as I thought.) 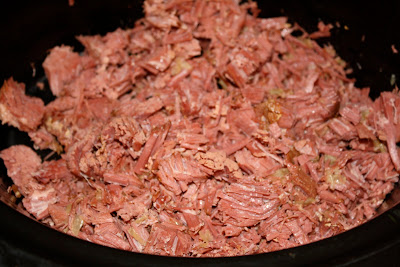 At 6 in the evening, ten hours after I'd begun the process, with the kitchen wonderfully perfumed with the scent of beef and onions, I took the brisket out of the slow-cooker, removed the fat, diced it up, and placed it back in the cooker on the "Keep Warm" setting. By this time I'd opened a bottle of beer and I put in a few drops to keep the beef moist. 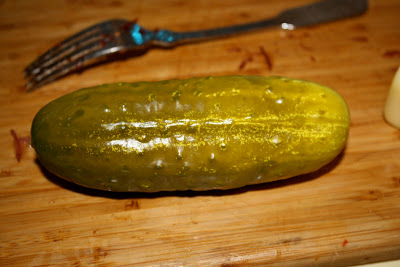 I used to hate Pickles. Not like I did (or currently do) tomatoes or avocados, but there was nothing about them that appealed to me. Of course I considered relish indispensable for hot dogs and I always liked it when my Granny made Thousand Island dressing with extra pickles, but what can I say? I was (and currently be) kind of an idiot most of the time.

Like many things I used to dislike and now love - onions, peppers, cilantro, sushi, etc. - I started eating pickles because someone else was ordering them and I didn't want to be rude or difficult. Years ago I used to meet up with a group of friends on Sundays at Jake's in Old Town to watch NFL games. (I've never actually had a favorite NFL team. In my younger years when people would ask what my favorite team is I would answer: "I don't have one; I just cheer for whoever is playing the Raiders or the Redskins, and 95% of the time that answer was met with approval. These days the list has grown to include the Patriots and the Cowboys.)

The routine used to be this: the first person to arrive would order a plate of sliders. Other people would filter in one-by-one and often help themselves to any sliders that were already on the table, then place an order themselves and reciprocate. There were days when I may have eaten at least a dozen of Jake's mini burgers.

And they always had pickles on them. There was no way I was going to order them without pickles and I didn't feel like picking them off, so I just ate the slider as is. And I realized: Wait a second, pickles on burgers are freaking delicious. I started buying amazing garlic and spicy pickles at the Victory Park farmers market (although I haven't seen the guy there in years). On a trip to New York City I made sure I visited The Pickle Guys. These days I cannot even conceive of ordering a burger or sandwich without pickles.

So I bought a giant dill pickle at the store to serve with the sandwiches. 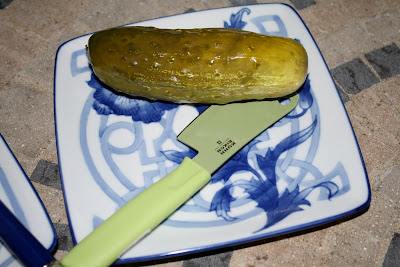 "My, what a giant pickle you have," Tracie said when I placed it on the table. 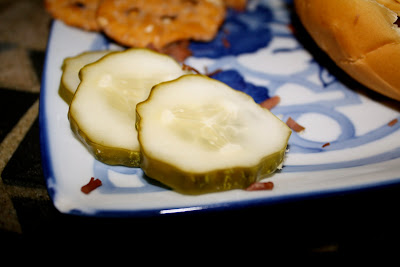 And it was delicious, one of the better pickles I have ever had. The four of us finished it off quickly. If I'd known how popular it was going to be, I would have bought more than one. 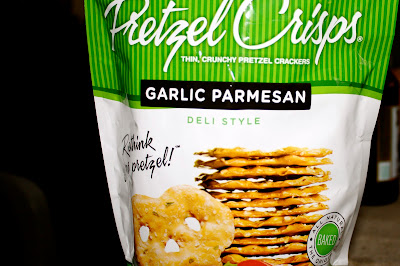 I served a product I've never tried before with the sandwiches: garlic-parmesan pretzel crisps. They were quite salty, but still delicious. 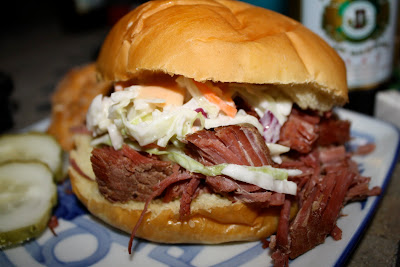 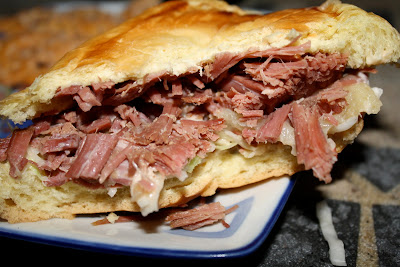 And the sandwiches were delicious, too. I topped mine with cole slaw, Swiss cheese, and Thousand Island dressing. (I also caramelized some onions and provided some Dijon mustard, in case anyone preferred those toppings.) Some of the pieces were a little on the dry side and I suggested a couple of things I could have done differently, but Tim said "I wouldn't have done anything differently." And Carla remarked that she couldn't believe she's made it so long without trying corned beef.

Everyone finished their plates. I mean finished them clean. I mentioned that I had more buns and leftover beef, but everyone was full. Which means I get to have another sandwich for lunch today, which is just fine by me.
Posted by JustinM at 12:07 PM

Once again thanks for the great Friday read.

this may sound weird, but i prefer corned beef to steak. ive actually had debates about the subject

Thanks for the good read! I love me some corned beef. BTW, I have a pretty good recipe for canning your own garlic dill pickles if you're interested.

Fritos: You have a standing invitation, although I know the commute might suck.

Anon: I don't think it sounds all that weird. I know someone (very well) who get sick just thinking about honey, but LOVES honey mustard. That's weird.

Jessica: I would love it if you could email me the recipe. I would like to take a look. But I have to say, I only made pickles once and I just wasn't sure it was worth the effort, especially when giant pickles like these (that are delicious) are less than a buck.