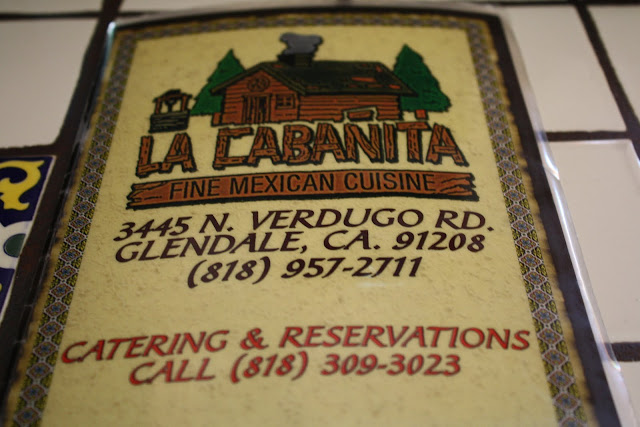 My brother has been wanting to go to La Cabanita with me for weeks - he'd never been - even inviting me to dinner with him last Thursday (when I in turn invited him over to my place for pizza). So yesterday he asked if we could go there for lunch. I said sure. I was over at my parents' house helping them with something - they both had the day off - so the four of us decided to head up to Montrose together for lunch.

It was much more crowded than it was last week when I lunched there. A table of eight police officers showed up right after we were seated. "I wonder if that's a good endorsement of the place," my dad wondered aloud. (I've taken road trips around this country many times, and in my experience you can never go wrong eating in a Mexican restaurant full of cops or a sandwich shop full of FedEx or UPS drivers.) 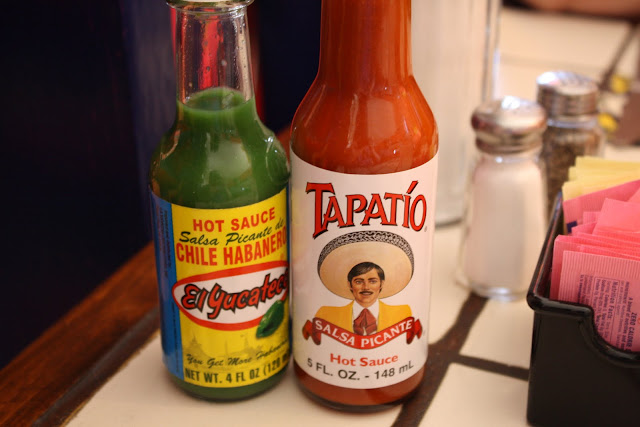 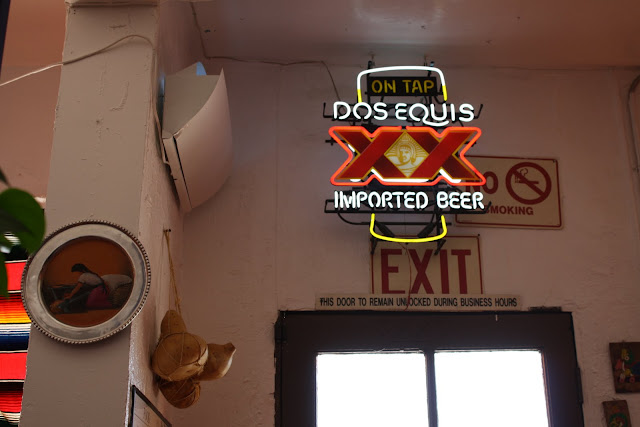 The table looked the same but the view was slightly different: we weren't right by the window like I was last time. No big deal. 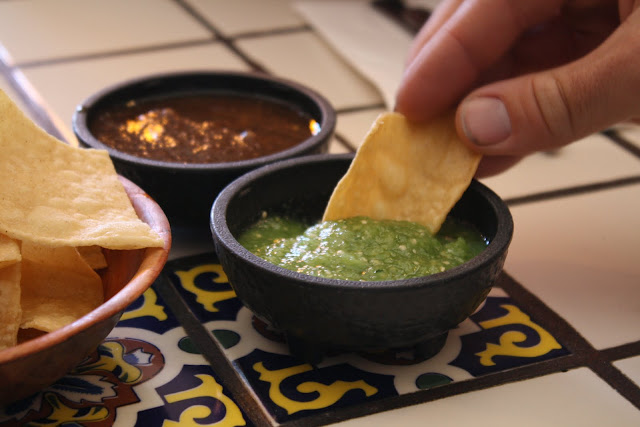 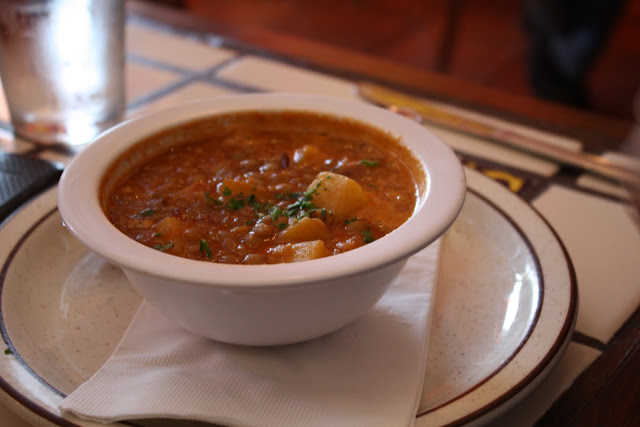 My brother started with a bowl of lentil soup. He really liked it but left out the slices of banana that lurked in the bottom. 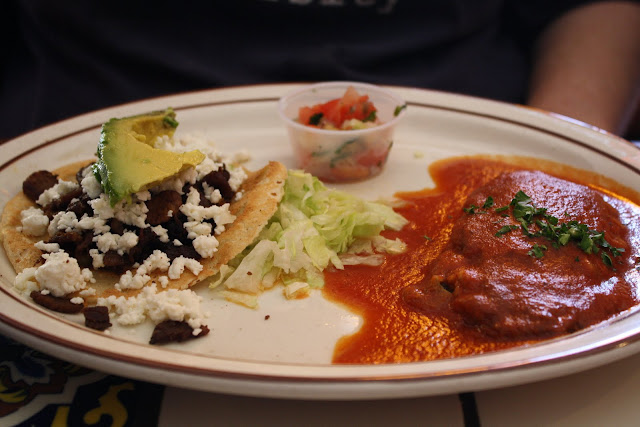 My mom ordered a chile relleno and Taco Norteño: a taco with chopped beef, avocado and cheese. She mentioned that she really enjoyed the chile relleno but did not say anything effusive about the taco, though she did eat all of it. 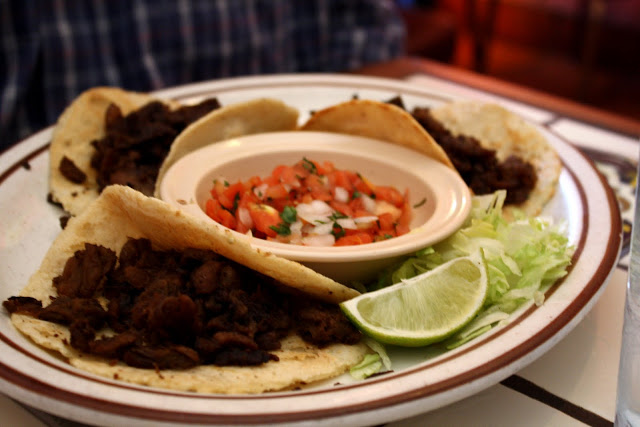 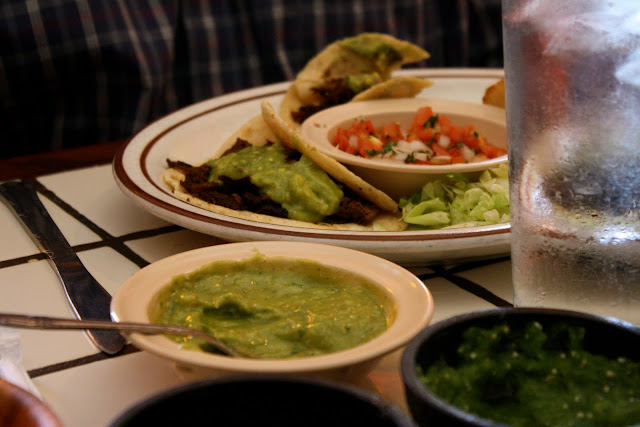 My dad was going to order two carne asada tacos but I encouraged him to order three. But it turned out he only needed two of them: they are full of meat and, as I wrote, we all ate a lot of chips and salsa before our food arrived. He had also asked for a side of guacamole, which he slathered on his tacos without trying it first, mistakenly: it was quite spicy. He also wasn't a fan of the slightly-toasted tortillas. (I agree with him on this point.) And, triple whammy, he had asked for the tacos with cilantro but no onions, and they left off both. (I offered to get the waiter's attention and get a small bowl of cilantro, but our waiter was mostly absent during our meal, so that would have definitely taken a while and my dad wanted to eat the tacos.)

"They were fine and they certainly give you plenty of meat, but I like Taco Fiesta more," he said. 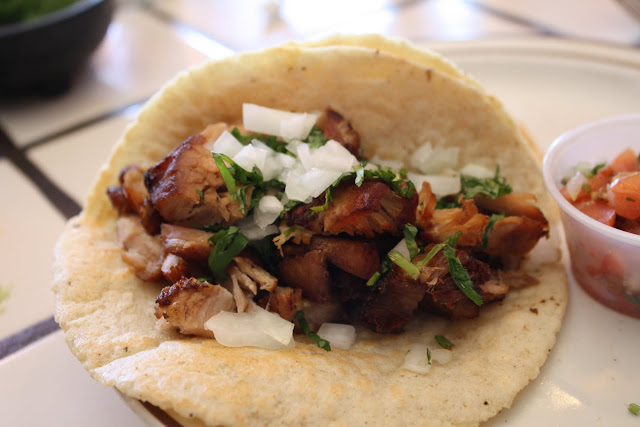 My brother ordered two tacos in addition to his lentil soup: my beloved cochinita pibil and one carnitas taco, pictured above. He loved the former but did not enjoy the latter, finding it too dry. (Which is how it looked to me; then again, pretty much every sit-down restaurant I have ever been to serves carnitas that are too dry.) 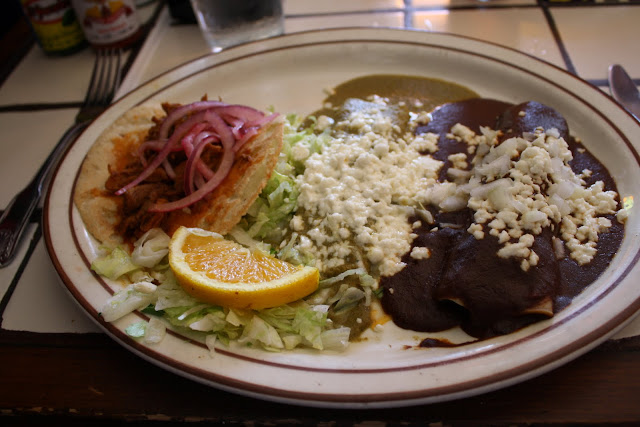 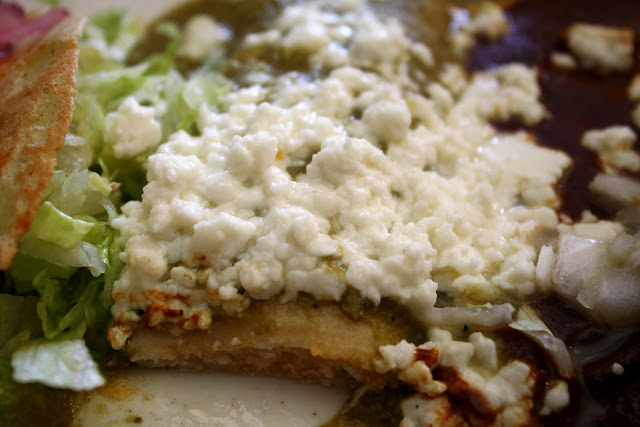 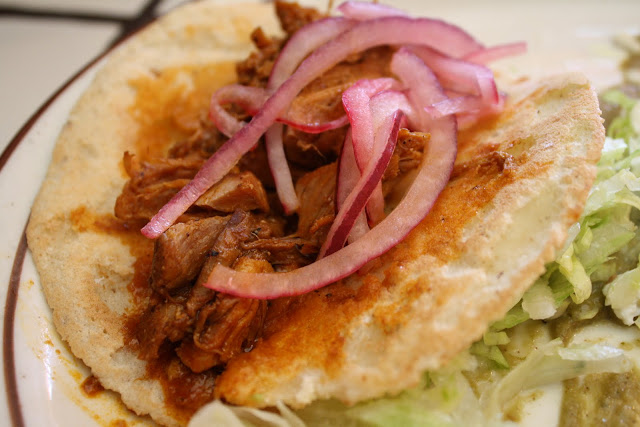 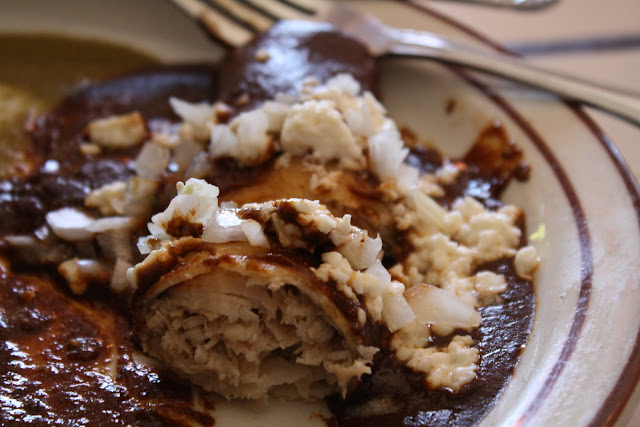 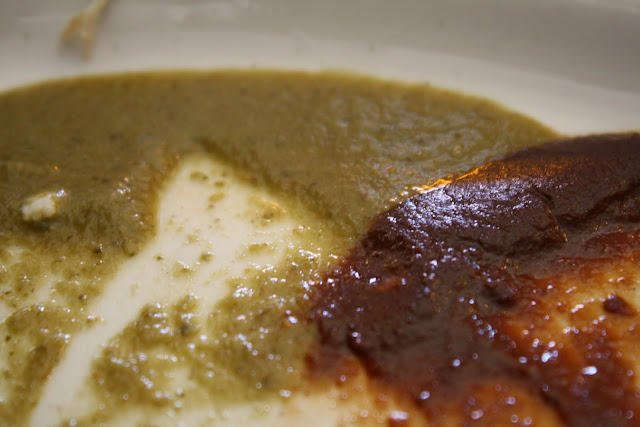 I varied my order only slightly, eschewing my usual second cochinita pibil taco in favor of a cheese enchilada with green mole sauce. Like the dark mole, this stuff is magnificent. No matter how full of chips I ever am, I can always eat La Cabañita's enchiladas with mole. If I ever were able to sit down to a meal here and resist the chips and salsa - which seems a pointless thing to say, because I doubt I ever could - I bet I could eat ten of these enchiladas. 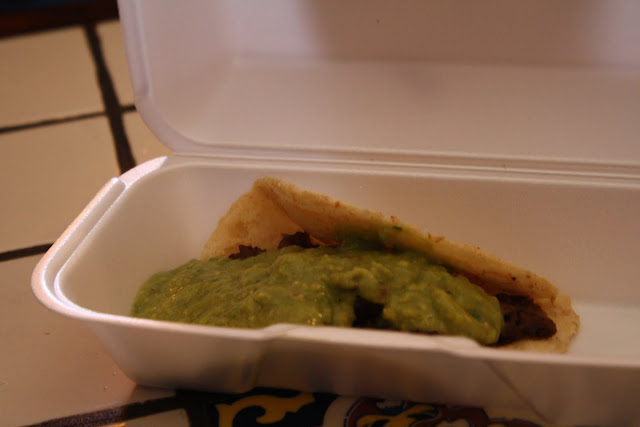 My dad said I could have his leftover taco, and I was strategically planning how to scrape off the guacamole and salvage some of the meat underneath. Then my mom grabbed the remainder of guacamole from the bowl and poured it over the taco, making it completely inedible to me.

"Now Elizabeth can have it," she said. 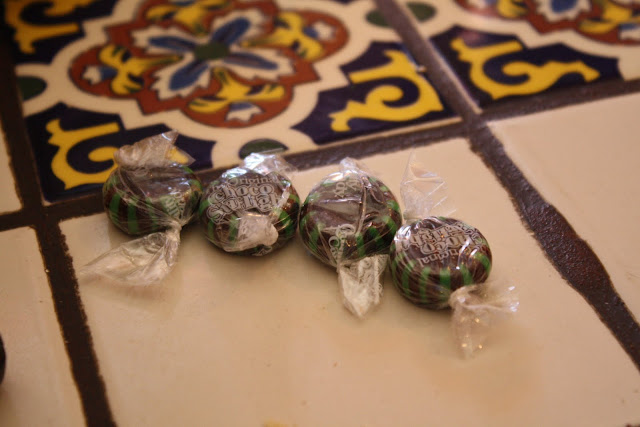 We got mints after lunch, but nobody wanted them, including me, so I shoved them all in my shirt pocket. We were all too full to eat even a mint.
Posted by JustinM at 11:30 AM

I loved the leftover taco covered in spicy guacamole!

It’s like I always say, repetition is the spice of life.

Not even just one “wafer-thin mint?”
http://www.youtube.com/watch?v=BlK62rjQWLk

Plantains not banana in the bottom of the soup. Not too bad, but disconcerting to find fruit in your soup - even for a lifelong soup eater like myself.