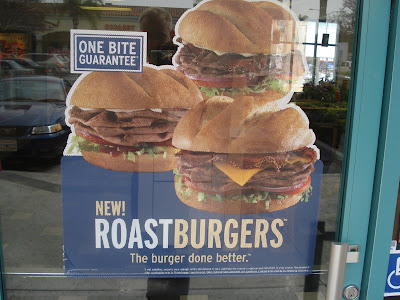 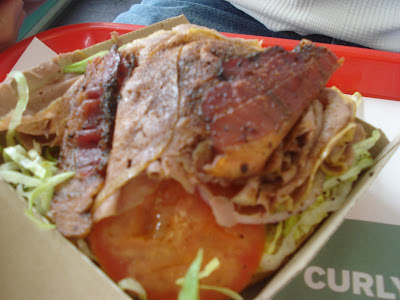 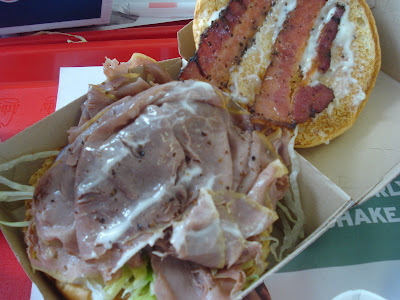 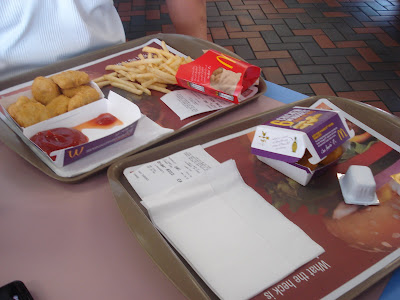 I've only been to Arby's two or three times in my life. There wasn't one very close to where I grew up, and their specialty is roast beef, which has never been a favorite of mine. In fact, I don't think I even ate at an Arby's until I was 24. My friends Troy, Ali and I had driven out to Colorado for the USC vs. Colorado football game (they are both USC alumni and I am always up for a college football road trip.) On our way back we had McDonald's for breakfast in Evergreen, Colorado; Burger King for lunch in Green River, Utah; Arby's for dinner in Barstow, California. I'm pretty sure it's the only day of my life I have eaten three different fast food meals (without being on a fast food crawl.)

But Arby's has been doing a lot of promoting of their new Roastburgers, from online banners to those obnoxious commercials on AM 570 where Petros gushes over how good they are. Arby's sent me a coupon for a free Roastburger with a drink purchase, so they other day I grabbed my friends Zach and Elizabeth and went to the Arby's in Alhambra to give them a try. Zach got the Bacon Cheddar, I got the Bacon & Blue, and Elizabeth took one look at them and decided she would just have a soda.

Zach, who is a fan of Arby's, thought it was good, but not any better than the regular roast beef sandwich. I was impressed with the toppings. The bacon was crisp and not very fatty; easily the best fast food bacon I have ever had. And the blue cheese was tasty. But the roast beef was rubbery and flavorless.

Afterwards we all went to McDonald's down the street to have some McNuggets, because we could.
Posted by JustinM at 12:46 PM