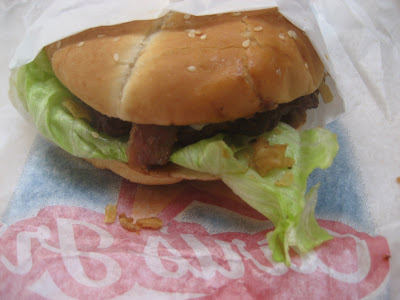 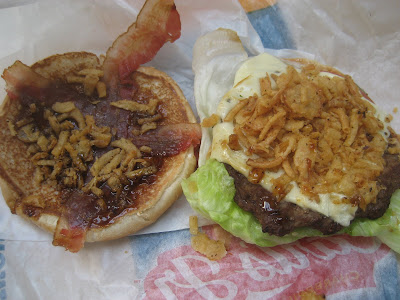 Even with my predilection for fast food promotions, there are three descriptions accompanying a new product that will make me stop everything to go try it: "boneless wings," "chipotle" and "whiskey." If KFC or Buffalo Wild Wings ever come out with "chipotle-whiskey boneless wings" I don't know what I would do. It would be one of the top ten days of my life. (My life hasn't been too exciting, I know.)

So when I first heard that Carl's Jr. has a new Kentucky Bourbon Burger, I knew I had to try it soon. (The above line about stopping everything was an exaggeration.) I'm not a big fan of Carl's, but I am of whiskey, although I have not had any in years. There's a story there but let's not get into it.

Well, OK, let's get into it. A few years ago my brother and I were in Bushmills, Northern Ireland. We woke up early in the morning to take a tour of the Old Bushmills Distillery, Old Bushmills being my favorite whiskey ever since hearing the Tom Waits' line years ago: "Old Bushmills I staggered / You buried the dagger."

At the end of the tour, two volunteers were selected to taste a sampling of the all the types of whiskeys Old Bushmills makes. I made sure I was one of the volunteers selected. Along with the Old Bushmills whiskeys, a few other types were poured, including Scotch, Canadian whiskey, and Jack Daniels, presumably so we could taste how inferior they all are to Old Bushmills. When the tour guide asked which I liked best, I said "The Jack Daniels. Do you have any Jim Beam?" He muttered something about Americans under his breath. 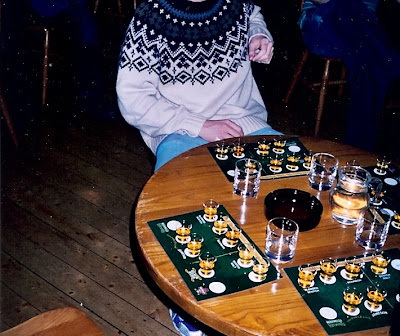 Still, I don't think trying a burger with a Bourbon sauce on it counts. (As the ad points out cheesily, the burgers are "0 Proof.") Plus, Carl's Jr.'s website has a coupon for $1 off the burger. Not trying the burger would be like throwing money away. Or something like that. So, not expecting much, I ordered a single version of the burger. (There are six dollar and double versions of the burger, the latter weighing in at 1000 calories and 51 grams of fat.)

It was OK. I know that's damning with faint praise, but considering my opinion of Carl's Jr., it's almost a compliment. Predictably, the bacon was fatty and undercooked. I immediately threw that away. The patty was the same flavorless patty they have used my whole life. But the sauce was pretty good, a sweet sauce that slyly morphs into something spicier. I would be interested in trying it on something other than this burger.

Carl's also has another promotion at the moment, something that can only be described as fried burrito pieces. I considered for a moment whether I could handle trying them for the sake of the blog. I could not.
Posted by JustinM at 2:33 PM

I haven't eaten at Carl's in years. Do you think the $6 burger patty would have had a difference?

I'm not sure. Probably not. I think I tried the $6 burger years ago when it first came out, but I don't remember how it tasted. At this point the last thing I want from Carl's is a burger with more of their meat.