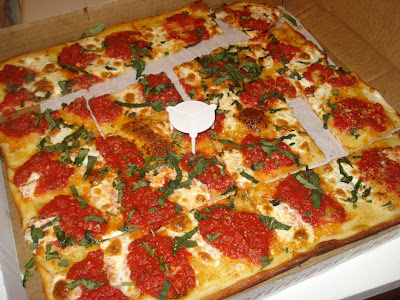 I am somewhat of a creature of habit when eating at restaurants. I'm certainly more open-minded and adventurous than I used to be (10 years ago I would not eat: onions, peppers, cilantro, sushi, and a whole bunch of other stuff that I now love,) but when I find something I love at a restaurant, I usually order it every time.

The Margherita pizza at Mamma's Brick Oven in South Pasadena is probably my favorite pizza in the San Gabriel Valley. (Casa Bianca is great, but I've never actually eaten a pizza there, only at parties when my buddy Dave has picked up a couple, so I don't feel I can accurately judge it without eating it at the restaurant.) So in all of my trips there, that's all I've ever tried, except one night around Christmas when my friend Tracie and I tried the chicken-bacon-ranch pizza at the urging of our friend Phil. (It was good but not as good as the Margherita.)

I have found my new favorite pizza.

Why didn't we go here for lunch? That looks awesome!

You need to shower more than once a week before I start taking you places where they know me.