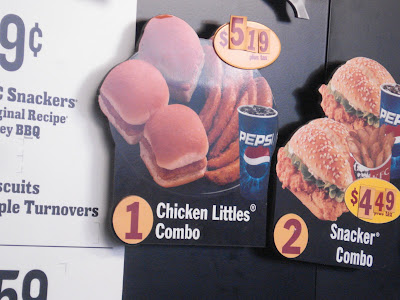 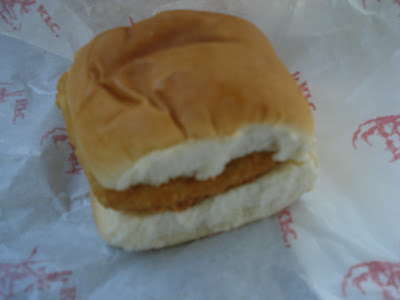 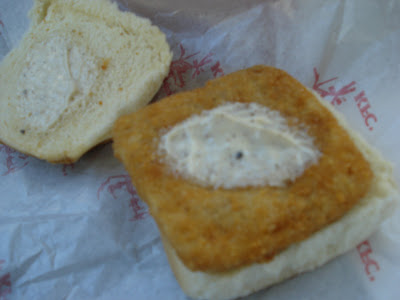 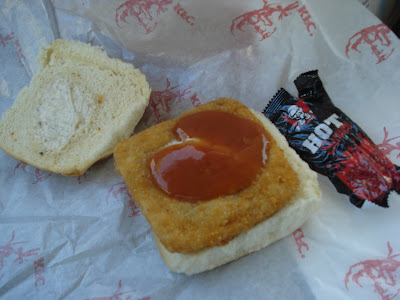 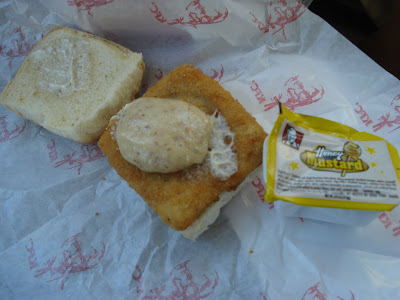 I did not see this coming. I ducked into KFC for a quick lunch in Riverside with the intention of trying some items on their new value menu. And what did I find as their #1 combo but Chicken Littles. I could not have been happier if I had to gone to Din Tai Fung, and, while walking around the block during the inevitable wait, seen King Arthur's Pizza back in it's old location on Baldwin Ave. (OK, that's a lie: I would have been much happier if King Arthur's returned. A couple years ago I said to my brother that if King Arthur's returned it would be one of the 5 happiest days of my life. He paused and said "That would pretty much be #1 for me." We decided that even though we were in our late 20s we would still ask our dad to give us 4 quarters each to play video games like we did 20 years ago.)
-
When I was a kid I loved Chicken Littles. The KFC up the hill from my parents' house sold them for 49 cents each and sometimes I would eat ten of them. I can't remember when they disappeared, but I'm guessing it was sometime in my early teens. When I was 21 I moved to Colorado and while going through a KFC drive-thru one night to pick up some food to watch Monday Night Football with my friend, I saw they had Chicken Littles on their menu. I got excited and ordered a dozen of them, only to be told by the employee "we just discontinued those yesterday and we haven't taken them off the menu yet." I figured that was the closest I would ever come to having Chicken Littles again.
-
But here they were on the board in front of me. "You have Chicken Littles?" I asked. "Yes," the man said with a concerned look on his face (as if he was about to tell me they contained poison or something,) "but they take 5 minutes to cook." As if this was some kind of deal-breaker. I would have waited an hour if that's what it took.
-
The Chicken Littles come served with a pepper-mayo sauce that is either delicious or disgusting, although in all honesty I've never decided which. I always put KFC's hot sauce on them, which I did again this time. I also tried one with honey mustard, although it was nowhere near as good as the hot sauce. They were fantastic. I only ate three of them (I can't overeat like I used to) but that was enough.
-
They cost twice as much as they did when I was a kid, but they're still only 99 cents each. Basically the same price as the KFC Snacker, which I tried years ago and found to be inedible. I will be back again to this KFC to have more of them soon, although part of me is expecting that they won't be available next time. Hell, for all I know, maybe that KFC won't even be there. Maybe it was a fried chicken Brigadoon. I don't care, though. I got to eat Chicken Littles again.
Posted by JustinM at 1:47 PM

It's been a while since I've checked on your blog... Jesus-H...what the hell are you eating these days?!~

I will treat you to any meal you like. Name the place. Liz too.

Does that include Amy making us Korean food?

That would be more like Amy treating you, and thus does not qualify. I can always ask though.

What if you were to pay her $5 to cook for us? Then everyone would be happy. Well, maybe not her, but I would have the Korean food in my belly, and that's the important thing here.

Barring that, how about a lunch at Mi Piace? Liz went there years ago before she moved here and wants to go back.

can you tell me what street in riverside this kfc was on?! thanks!

Hi there. It was in the Canyon Crest Towne Center (on, uh, Canyon Crest.) It was a few months ago that I went there, but they had chicken littles, boneless wings, the "flavor station"... all the discarded KFC promotions over the years. I have not been back since, though.

please tell me this is the riverside in california. if not, i still want the city and state because im about to fly there.

El Polo Loco has 99 cent sliders now that have mayo and look VERY much like the Chicken Littles did. I agree-- They were the greatest menu item at any fast food joint, ever.

i live in texas i wish that had these in my city, tear....

hi! can you tell me which location this is?

Hi there. The location I wrote about in the post is in Riverside, however I haven't been there in probably a year and someone wrote to me that they don't have the chicken littles anymore. However, I believe they still have them at the KFC on Foothill Blvd. in Arcadia, just east of Santa Anita Blvd.

Do you know if the KFC on Foothill in Arcadia still has 'em?

They certainly did last time I was there, perhaps four months ago.

I was just there today and while they DID have them, they did not have the right bun. They had to use the Snacker bun. The manager said that the company who supplies them is no longer carrying them, but that he was looking for other vendors. Anyway, still good and as close are you're going to get to the real thing from way back when for the time being.

Thanks for the update! That's disappointing about the buns, though, as I don't like the snacker buns.

Oh goodness! I used to love Chicken Littles as a child... I miss them.. I wish our KFC would get them back!

Oh goodness! I used to love Chicken Littles as a child... I miss them.. I wish our KFC would get them back!

So nice to see there is a Chicken Little Fan club out there. I live in L.A. and gave up hoping a long time ago that any KFC would carry them, but next time I'm near Aracdia...or, heck, maybe I'll just drive there right now. If it's up to each store to serve them, maybe word of the underground Little fans will spread and other KFC's will catch on.

P.S. Try dunking them in gravy. It's heaven.

Sure, but did you read the comments?

The Riverside location is in the Canyon Crest Town Center. 5225 Canyon Crest. The Arcadia location is 119 E. Foothill Blvd. I have heard that neither location has them anymore, but it's worth a try.

my parents use to be owners of king arthurs in arcadia... and my uncle was the owner in temple city... we closed down both locations because the economy went down in CA...i was about 7 years old when that happend... we still make the pizza till this day in our house.. we still have the recipe... i am thinking when i am done with college (eventually) opening up a new restaurant.... that place brings back alot of memories of my child hood :)

Awesome. There are many, many people who miss that place tremendously and would flock back.