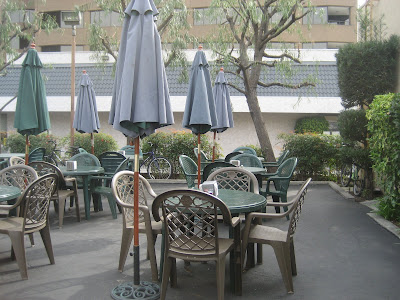 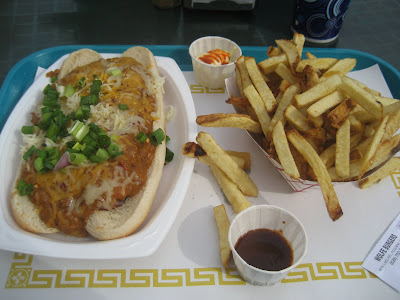 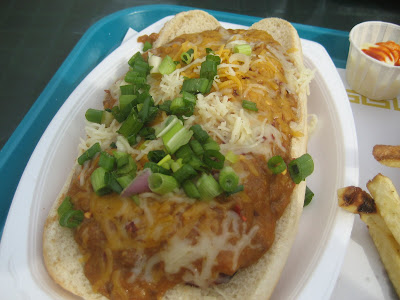 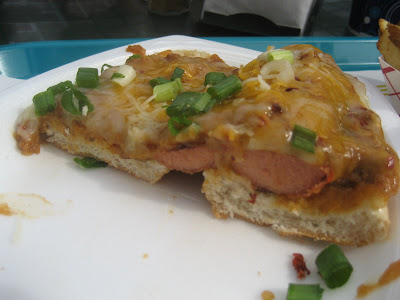 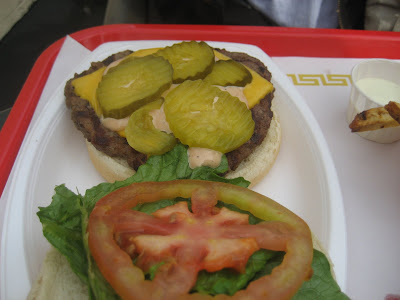 While running errands the other day, Elizabeth and I both felt like having burgers for lunch. I was considering The Hat, but we wanted someplace a little more relaxing where we could hang out for a bit and talk. I considered Hamburger Hamlet, but the last time I was there I was unimpressed with both the quality of the food and the size of the bill.

We'd been to Wolfe Burgers a month earlier but that was a cold weeknight and we sat inside. This was a weekend day, and, even though it wasn't sunny, it was not cold, so we decided to eat on the patio. Elizabeth got the exact same thing as our previous trip: a Wolfe Burger with cheese, and she put on the exact same condiments. I thought she should have tried something new, but, as usual, she was smarter than I.

I love WB's chili, and I love hot dogs, but I have never tried their chili dog. So I decided to give it a whirl. The chili was great, as usual, but the hot dog was not good. The bun had the consistency of white bread. Ordinarily this would be a positive to me, but it completely fell apart under the weight of the chili. I suppose if I'd used a knife and fork I could have handled it more easily, but I have a problem with the idea of eating burgers or hot dogs with a knife and fork. (To me, that's a culinary crime along the lines of people ordering a "crustless pizza" to save on carbs.)

The wiener was flavorless and not even hot. It tasted like it had been boiled just long enough to warm it throughout and slapped in the bun. It was not terrible, but I certainly wished I'd ordered my usual turkey burger and gotten a side of chili, or maybe some chili cheese fries. (My fries were great, as usual, and I poured myself some mayo with a splash of hot sauce and some A.1. steak sauce to dip them in.)

Once the warm weather is here again for good I'm sure I will be back to the Wolfe Burgers patio, but I won't order a hot dog ever again.