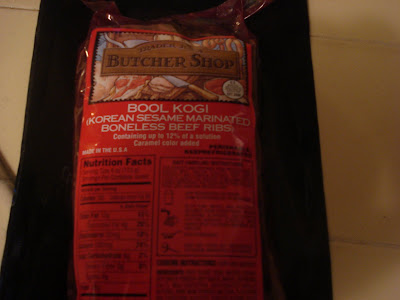 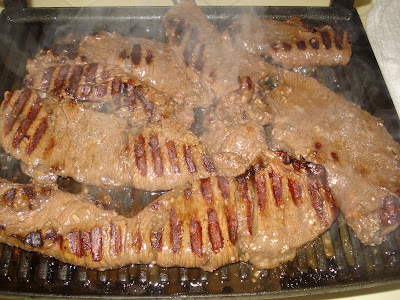 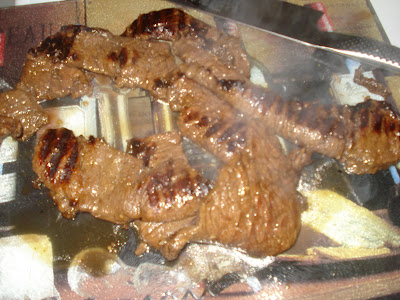 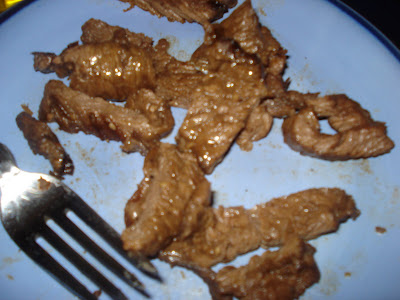 A few days ago my friend Bryce left a comment on my blog making fun of my recent fast food posts and offering to buy me a meal. I replied that I wanted his wife to cook Korean food for me. I was mostly being a smartass, but I started thinking about a Korean meal I ate at their house a couple years ago and I began to crave it again.
-
I love Korean food. When I was kid and my diet consisted mostly of fried cheese and chicken fingers, I loved the Korean short ribs my mom's cousin made. (He had served in the Army during the Korean War and told my brother and I an elaborate story about finding the recipe, which of course years later we figured out was complete crap.) When I was 24 I lived close to Koreatown and my friends and I used to go for Korean barbecue frequently. A few years ago my friend Min shared with me her mother's technique for making kimchee; I made some myself and it was the best I have ever had.
-
So today when I was shopping at Trader Joe's, I paid more attention than usual to their "Bool Kogi." I vaguely remembered trying it years ago but I had no memory of the taste, and, craving Korean food, I figured I would try it for dinner.
-
This was the stupidest culinary idea I have had since I saw pictures of my brother's trip to Cuba a year ago and promptly went to Cheesecake Factory and ordered a Cuban sandwich (which turned out to be the second worst sandwich I have ever had in my life.)
-
The meat smelled pretty good, and the marinade was indeed a nice flavor. And the pieces of meat I was able to eat were tasty. Unfortunately, there were only a few pieces that were edible: the meat was as fatty as any meat I have ever tasted. I spit out perhaps 75% of it. It was very disappointing. Out of a package that weighed 1.25 pounds before cooking, I was probably able to eat three ounces of meat.
-
I will never try this again. I don't even want to try Korean food again for a long time. Well, at least 48 hours.
Posted by JustinM at 11:14 PM

i saw that there once and i wondered about it. we definitely will have you over again when you are ready to eat korean again. but it's probably in your best interest if it's cooked by my mother.

Well, I have no problem with that. As I recall, the time I had Korean food at your house it had been either cooked by your mother or cooked by you with your mother's guidance. Either way, it was the best Korean food I have ever had (even better than this Trader Joe's $5 bag of fat with a little meat.)

I was having the exact same problem with this TJ's product, but then my husband discovered something: cut the meat into tiny slices against the grain, and voila! It's totally edible and delish. In fact, we had some last night. :)

You sir are a prag, I had no problems with this product served with couscous and then serve the drippings over the couscous. I recommend not overcooking the meat, which you probably did. Anything is inedible if overcooked.

God I love anonymous tough guys. I would love to see you call me a prag to my face. But we both know you wouldn't.

I didn't like the product. If you did, great. I would never call you a name because I disagree with you.

i ate some from Tj's for the first time and it was really really tough meat and there wasnt any fat in mine. i didndt like it i like the korean one better it was softer and easier to chew

Wow! I had some last week and it was fantastic. I broiled it for 8 - 10 minutes in the gas oven on a broiler pan and served the drippings over steamed rice. There were a few chewy bits on some pieces but I persevered and got 'em done.
I'll post a recipe on my blog, http://foxfuramused.com , soon. I do lotsa asian cooking, stir-fry, and trailer trash Spam recipes (flamethrower Spam anyone?)...

I don't think I would judge it on one try. A distracted quality inspector may have let a bad batch through. I have had good luck with it. Some fried rice or noodles, veggies and a fried egg on top.....delicious.

Hi Barry. I tried it years later by slow-cooking the meat and letting the fat melt away. It was much better than grilling.

How did you slow cook it? I recently bought a package of this stuff and would love to try your method. . .

I don't remember exactly but I think I put it on a bed of onions and did 5 hours on low. With just one package it's not an all-day thing... though with all the fat in it, I imagine you could slow cook it for much longer and it would still be good.