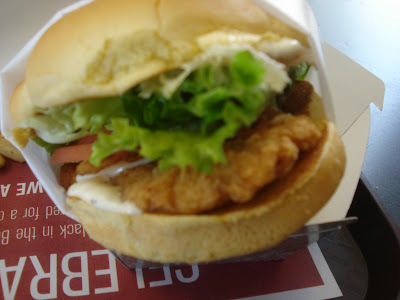 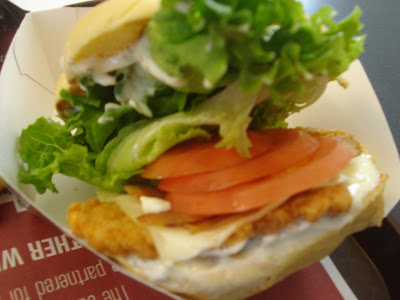 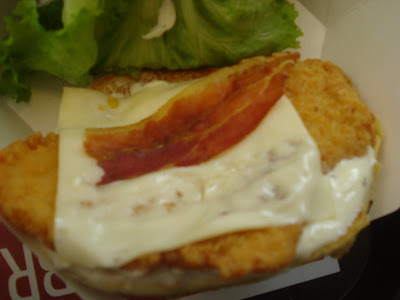 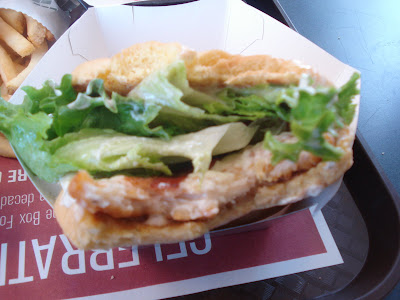 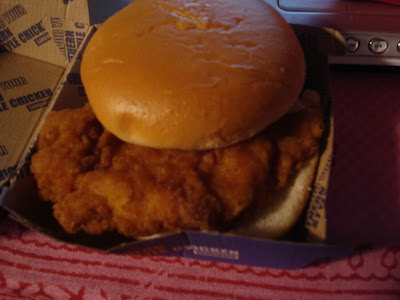 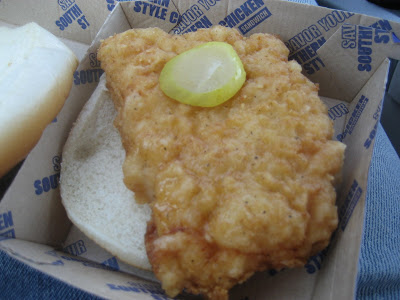 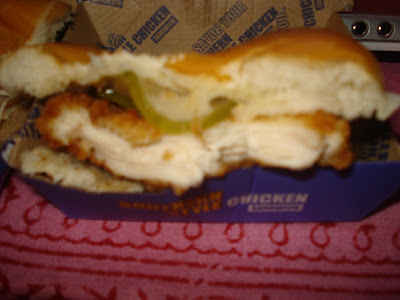 I always get a kick out of fast food restaurants going the "folksy" route with their promotions. What makes Jack in the Box's chicken sandwich "homestyle?" Not once did my mom fry a chicken breast and put it on a sandwich for me. Is this a common experience that I missed out on?
-
At least McDonald's "southern style" makes sense: people in the South love fried chicken. My friend Tom and I once stopped at a gas station in Clarksdale, Mississippi at 9:15 in the morning. It was his turn to pay for gas and he went inside while I pumped. He was in there at least 25 minutes. People were coming out every few seconds, but not Tom. I was definitely getting a little apprehensive. Finally, he came out with a big grin.
-
"They have a breakfast special," he said. "You have to go check it out."
-
So I went in. $1.49 for a piece of fried chicken and tall can of Budweiser. There was only one line, so whether you were paying for gas or "breakfast," you had to wait. There were at least 40 people in line (most of them with the exact change; this was not their first time here.) And let me repeat: it was 9:15 in the morning. God, I love the South.
-
I went to Jack in the Box for lunch. There was a time when I loved JITB and would eat it frequently. I remember many post-basketball meals in high school when my dinner was a Jack's Spicy Chicken, large fries, and toasted ravioli bites. But the last few years I have only been there when there has been a new promotion that looks good, which isn't often.
-
The sandwich seemed substantial when they handed it to me. Of course, upon unwrapping it I realized this is just because there is half a head of lettuce and several slices of tomato piled on top of the chicken. The chicken is not impressive: a flimsy, very thin patty covered with a slice of limp bacon that I threw across the room with the disgust (or roid rage) of Roger Clemens throwing that bat head at Mike Piazza.
-
And the whole thing is just drowned in sauce. I don't particularly like ranch, I think it's a very boring flavor, and it was everywhere on this sandwich. Even though I was very hungry, I did not finish it. It was not good.
-
I did not have very high hopes for McDonald's. I have never been a huge fan of McDonald's, although I certainly have probably eaten there hundreds of times in my life. And I do admit their McNuggets are really good since they switched to all-white meat about 5 years ago and you no longer have to worry about biting into a piece of dark meat that Jaws (from The Spy Who Loved Me) would be unable to chew through.
-
The sandwich looks great when I open it - a much larger breast, a breading that actually is crisy, and served on a soft, buttered bun. And, most importantly, it is adorned with only two pickles. It isn't drowned in a boring sauce that adds nothing to the sandwich. I added some of McDonald's hot mustard - perhaps my favorite fast food condiment - and it tasted great.
-
The McDonald's sandwich was much better than Jack in the Box, but you know what? It's been years since I've had Chick fil-A, and I remember their chicken sandwich being better than either of these. Maybe that will be lunch tomorrow.
Posted by JustinM at 1:08 PM

Chick-fil-A rocks. Have you had one of their chicken biscuits? Odd but totally awesome.
Also, since you delved into the chicken sandwich, I would love to hear your opinion on the Pollo Campero chicken sandwich! It's brand new (may not be available everywhere) and if you visit on April 2nd, you can even try one free.
Do you have PC near you?

I have not had one of their biscuits. I think I've only eaten there a couple times in my life.

Funny, I had heard about the new PC chicken sandwich last week, and I was just thinking a few minutes ago that I should give it a try. There are a few locations nearby. Hell, maybe I could do Chick fil-A and Pollo Campero tomorrow! (I don't have much of a social life.)